What McDonald’s Shows About The Minimum Wage : Planet Money : NPR

Editor’s note: This is an excerpt of Planet Money‘s newsletter. You can sign up here. 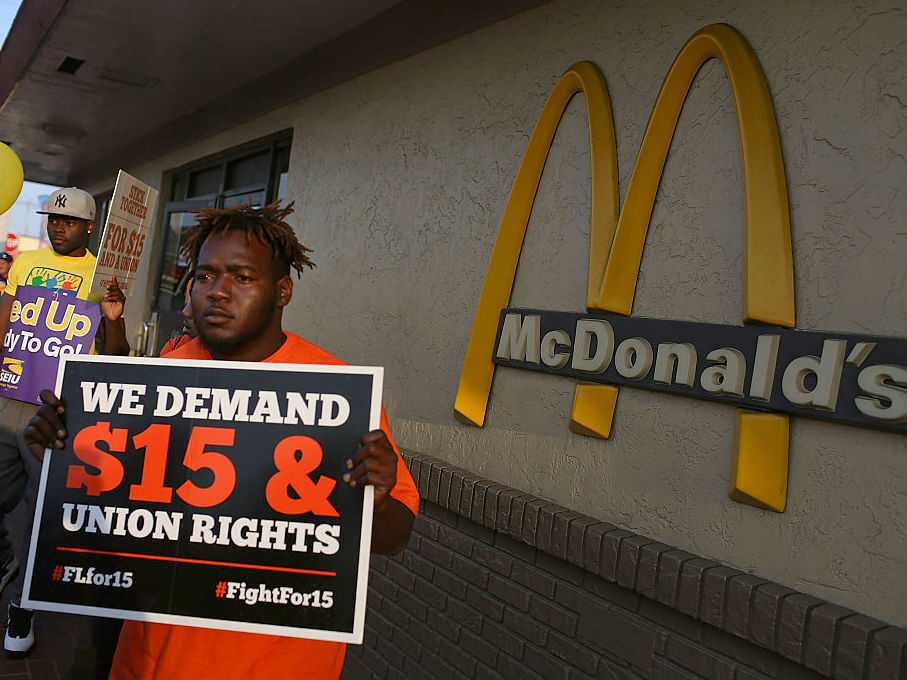 On November 29, 2012, dozens of fast-food workers assembled at a McDonald’s in midtown Manhattan to demand better pay. Their demonstration kicked off a massive wave of protests for a $15 minimum wage. Since then, cities and states around the nation have taken action. And now, the federal government, led by President Biden and a Democratic-controlled Congress, has begun to consider making the $15 minimum wage national.

McDonald’s is one of the nations’ biggest employers of low-wage workers. As such, it was kind of the perfect place to launch what was, in retrospect, the beginning of an historic labor movement. A new study by economists Orley Ashenfelter and Štěpán Jurajda suggests McDonald’s is also kind of the perfect place to test the effects of the minimum wage increases that workers have been fighting for.

Ashenfelter is an economist at Princeton University, and he’s spent a couple decades studying McDonald’s. Back in 2012, when he was president of the American Economic Association, he even dedicated part of his big presidential address to the company. And it’s not just because, as he told us, his “favorite meal is fries, a chocolate shake, and a Big Mac.” He views McDonald’s as a kind of natural “laboratory” to compare and contrast different labor markets. I mean, think about it: each McDonald’s restaurant is pretty much the same; the workers have almost identical jobs, regardless of which part of the world they’re in; the food they make is generally the same; and McDonald’s are basically everywhere.

Meanwhile, over the last decade, a McFlurry of cities and states has been raising their minimum wages. In their new study, Ashenfelter and Jurajda use McDonald’s restaurants as a kind of treatment and control group to assess the impact of these new minimum wage laws. They obtained data on hourly wage rates of McDonald’s “Basic Crew” employees, the prices of Big Macs, and other information from about ten thousand McDonald’s restaurants between 2016 and 2020. And they crunched the numbers to see what happens when a city or state increases its minimum wage.

One big fear of a higher minimum wage is that it could cause businesses to replace their workers with machines. Ashenfelter and Jurajda found some McDonald’s restaurants have already installed touch screens, so customers can input their meal orders without interacting with a human being. But they also found that those touch screens weren’t installed in response to a higher minimum wage. “We couldn’t find any relationship between minimum wage increases and the adoption of touch screen technology,” Ashenfelter says.

Finally, and perhaps most thought provokingly, the economists look at the effects of minimum wage hikes on the price of Big Macs. They found that when the minimum wage goes up, the price of a Big Mac goes up, too. Ashenfelter says the evidence on increased food prices suggests that basically all of the “increase of labor costs gets passed right on to the customers.” But because low-wage workers are also usually customers at low-wage establishments, this suggests that any pay raise resulting from a minimum wage increase might not be as great in reality as it looks on paper. In econospeak, the increase in their “real wage” — that is their wage after accounting for the price of the stuff they buy — is not as high, because the cost of some of the stuff they buy — like fast food — goes up too.

However, Ashenfelter says, the fast-food workers they studied were still, on the net, much better off. “They still get a raise. They just don’t get as big a raise as it may seem,” he says. In effect, a minimum wage increase appears to be a redistribution of wealth from customers to low-wage workers. Ashenfelter says he thinks of it like a kind of sales tax. And, for whatever reason, unlike many other forms of taxes, the minimum wage tax seems to be more popular with voters — even in many red states, like Florida, where they’re voting to increase them.

The one big disappointment from Ashenfelter and Jurajda’s study is they’re unable to tell us much about the effects of minimum wages on employment, which is at the center of the debate about the policy. They couldn’t obtain data on hiring and firing from McDonald’s restaurants around the nation.

It’s worth remembering that McDonald’s was also at the center of the famous study by David Card and Alan Krueger that revolutionized economic thinking about the minimum wage. Card and Krueger found no evidence that New Jersey’s hike of the minimum wage from $4.25 to $5.05 reduced employment at fast food restaurants there. Would the same happen in the entire nation if the federal government raises it from $7.25 to $15? Last week, the Congressional Budget Office, while saying a $15 minimum wage would reduce poverty, cast doubt on the idea that there would be no substantial job losses.

Did you enjoy this newsletter segment? Well, it looks even better in your inbox! You can sign up here.

L.A., Chicago giving away cash with no strings attached to residents in need. Are universal basic income programs working?

Why Remote Work Might Not Revolutionize Where We Work : Planet Money : NPR

Shell proposes a shift to Britain, dropping ‘Royal Dutch’ from its name.

Opinion | Chris Cuomo Sexually Harassed Me. I Hope He’ll Use His Power to Make Change.