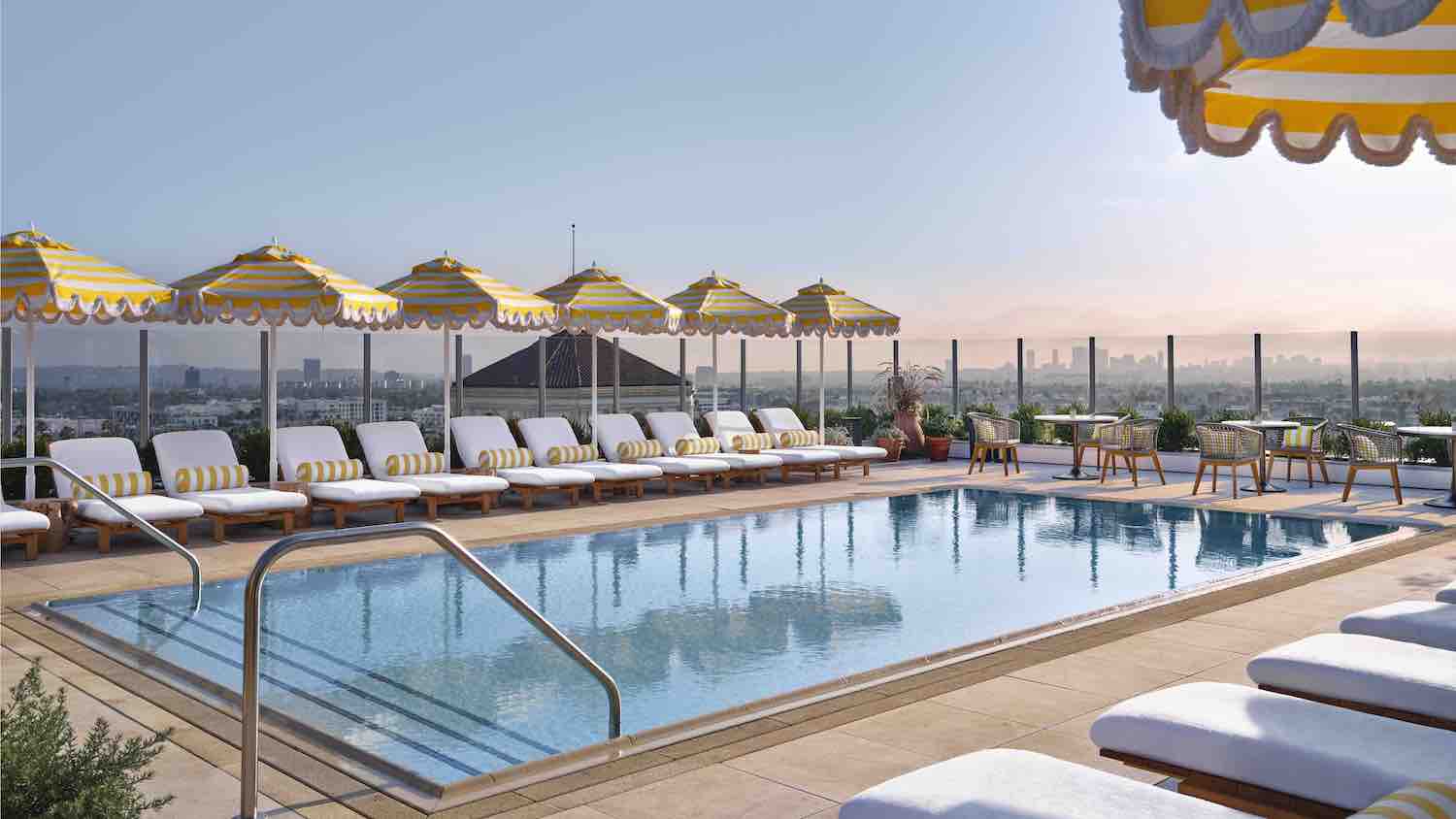 Thompson Group’s California debut opened in August and already cemented its spot as the hot new place for discerning Angelenos and travelers to gather. Contemporary art – many pieces by local artists – adorn the walls while a star chef is readying to open an eagerly anticipated French restaurant concept this fall. Then, of course, you’ve got the rooftop pool deck and buzzy bar for cocktails. There’s really nothing not to like about this handsome new addition to Los Angeles’ luxury hotel scene. 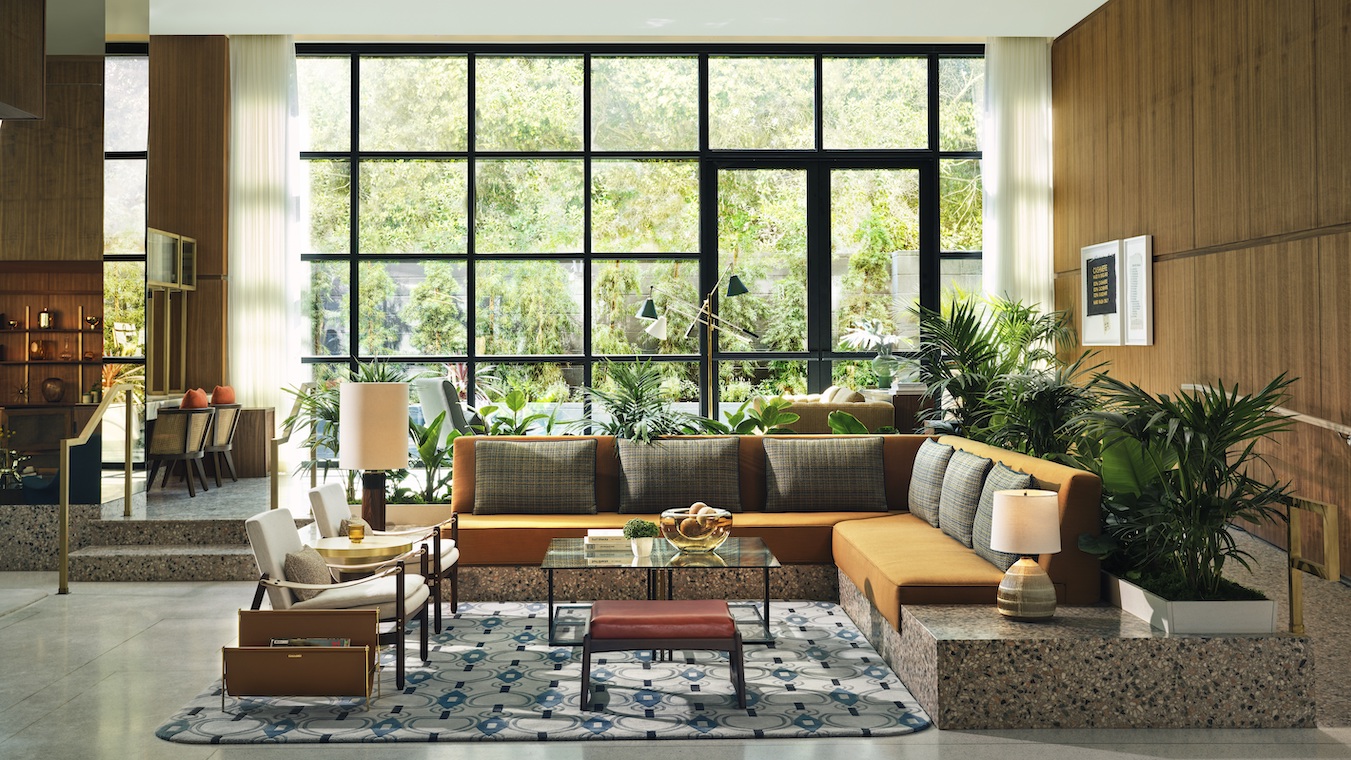 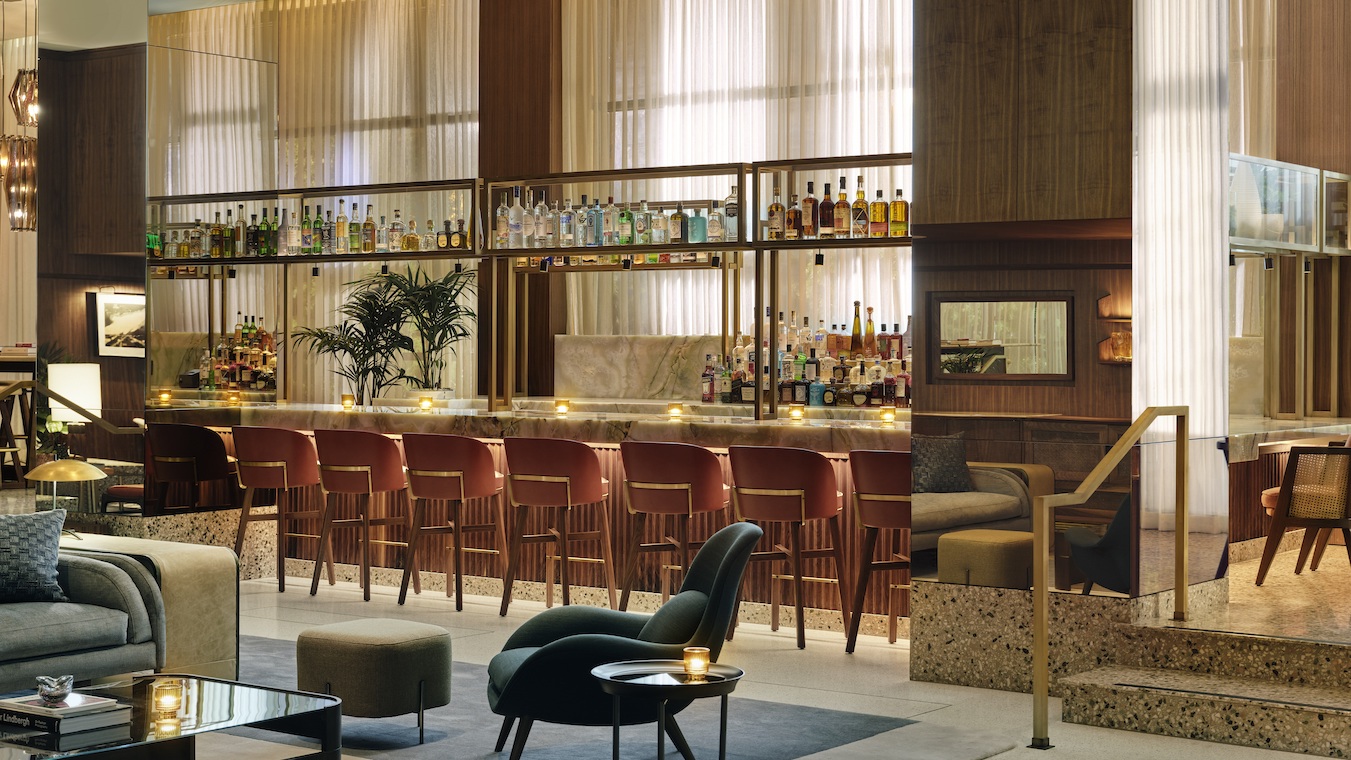 With its sophisticated mid-century styling (think wood paneled walls, pendant lights and potted palms), Don Draper himself wouldn’t look out of place at the lobby lounge bar sipping an Old Fashioned or two. Located one block north of Sunset Boulevard, Thompson Hollywood also features a scene-stealing rooftop pool along with an adjacent French Riviera-inspired bar, which on one side affords a fabulous view of the Hollywood Sign. London-based designer Tara Bernard & Partners weaved their magic across each of the 11 floors, creating a luxe residential feel that celebrates Los Angeles’ sense of place from music and movies to modern Hollywood glamour. 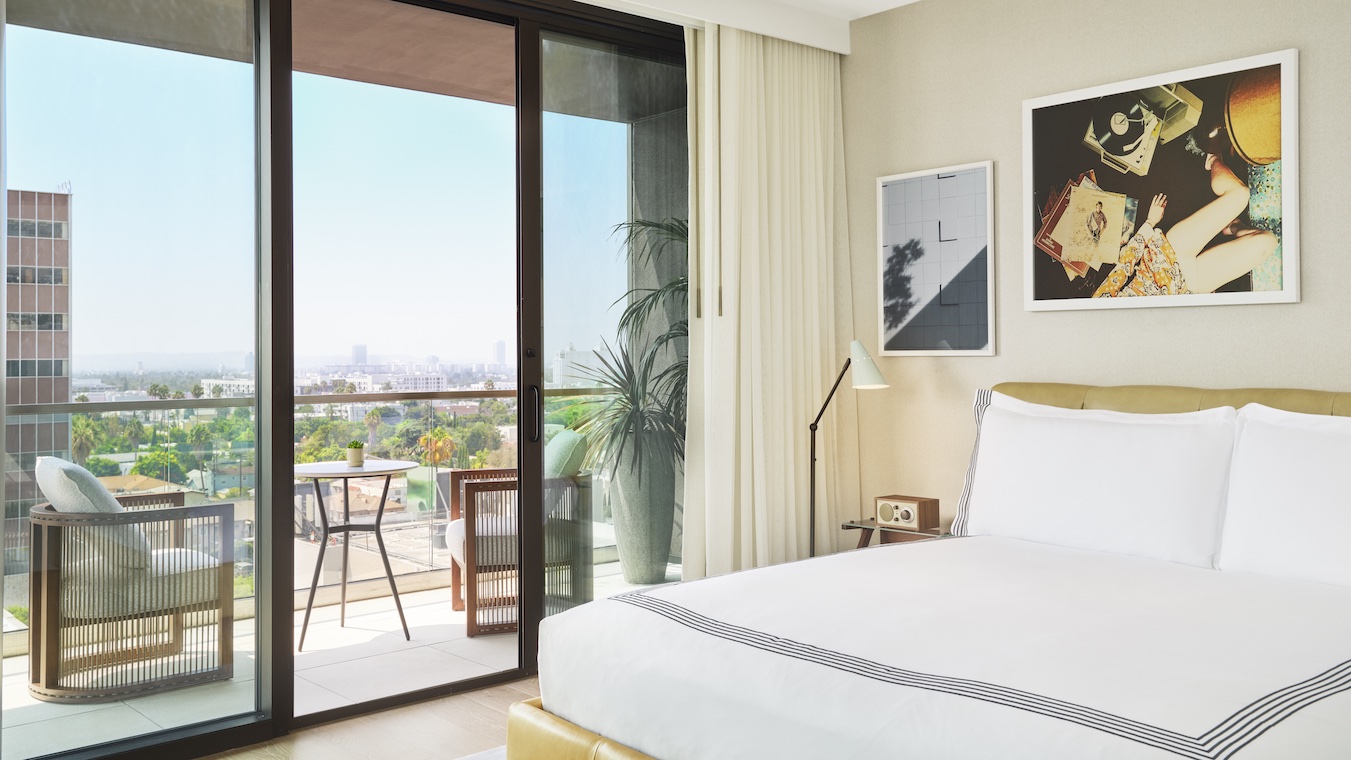 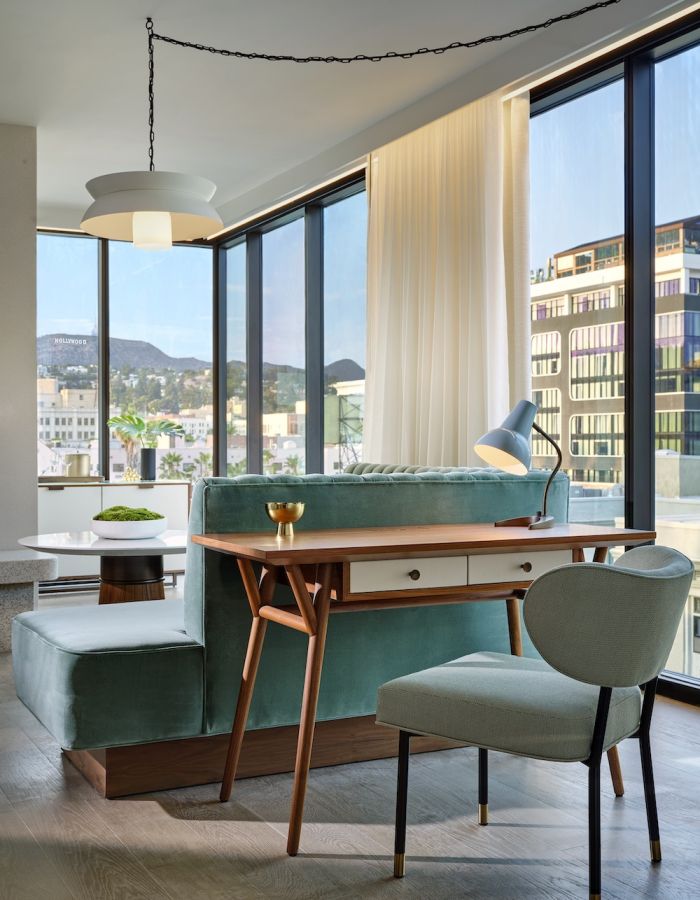 Guestrooms and suites are elegant affairs, too, with luxurious details from eye-catching contemporary artwork to leather magazine racks and elegant yet slightly industrial glass wardrobes. Terrazzo elements feature across the bathrooms, which come stocked with D.S & DURGA products. There are 190 rooms, many with a view of the Hollywood Hills, plus a swanky king room with a private sun terrace. From the sixteen suites, there’s an extravagant Studio View King Suite and showstopping wraparound Thompson Suite. 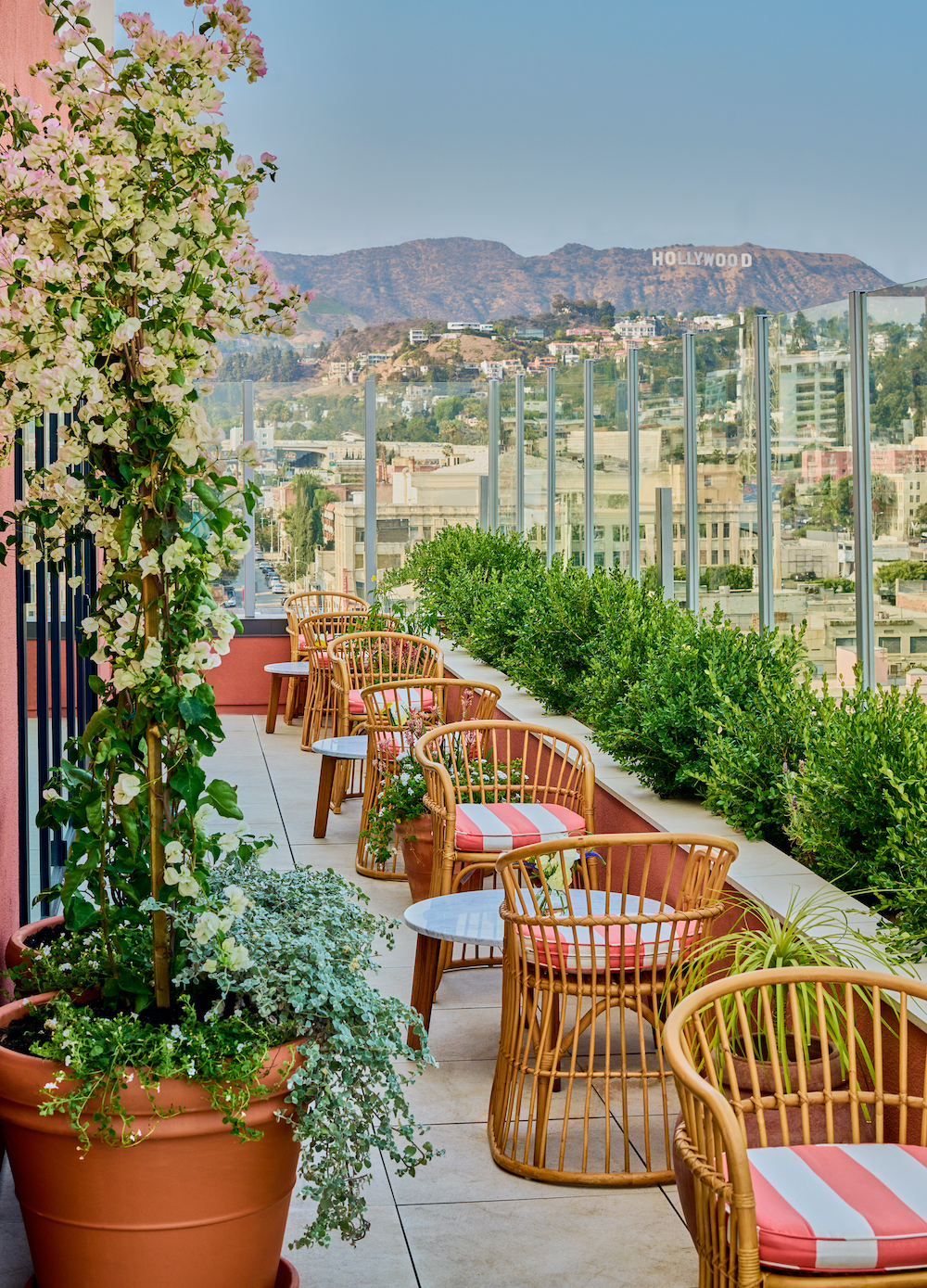 As with the rest of the hotel, the décor and design details here are gorgeous. The vibe is Cote D’Azur in the late 1960s, as referenced in the gallery walls of vintage photos depicting stars like Jane Birkin, Bridgette Bardot and other beautiful people on holiday in the South of France. There are blue velvet banquettes, an antique fountain in the bar and plenty of potted palms. Thursday through Saturday, a DJ spins records from 9 pm until midnight. 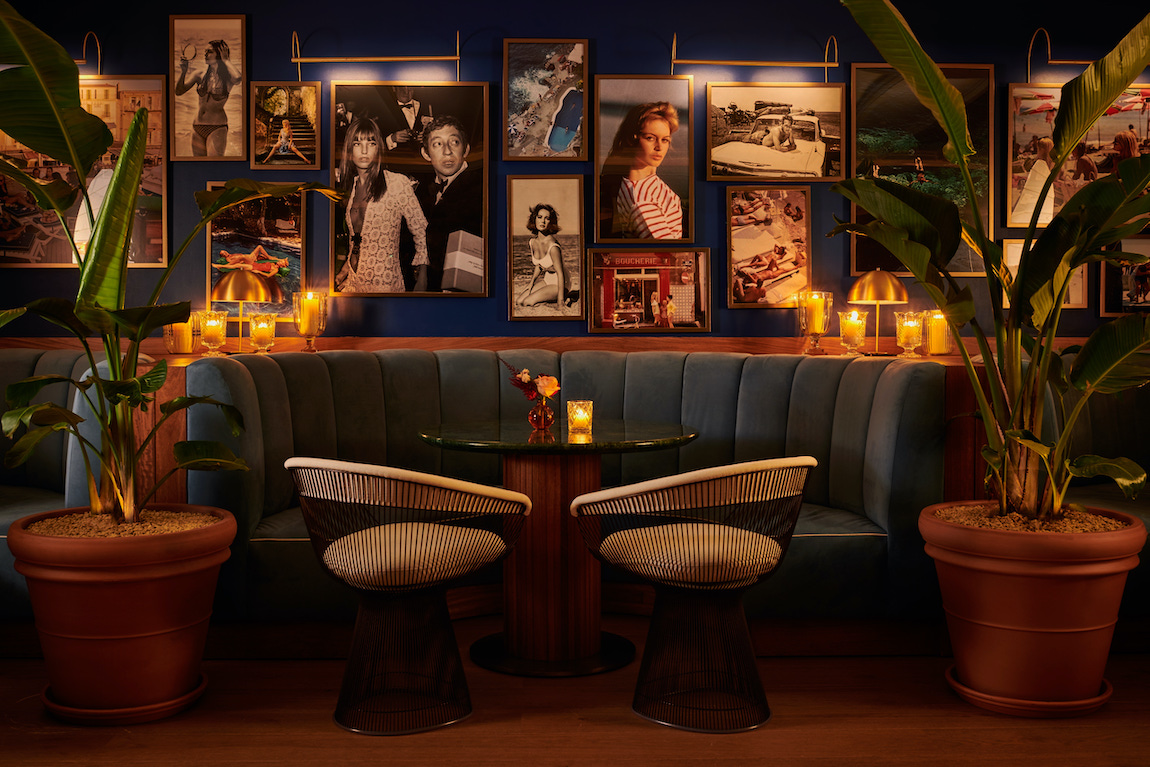 When in Los Angeles

Nearby cultural landmarks include the Hollywood Walk of Fame and the Welton Beckett-designed Capitol Records Building, while Hollywood’s oldest restaurant Frank and Musso (as seen in Quentin Tarantino’s “Once Upon a Time in Hollywood”) is an easy walk a few blocks over. Griffith Park and Hollywood Bowl are each a 10-minute drive or rideshare away. With the Thompson Hollywood so centrally located, it’s just as easy to pop over to the West Side (Beverly Hills, Century City), south to La Brea and LACMA, east to neighborhoods Los Feliz and Silverlake, or further still to Downtown. 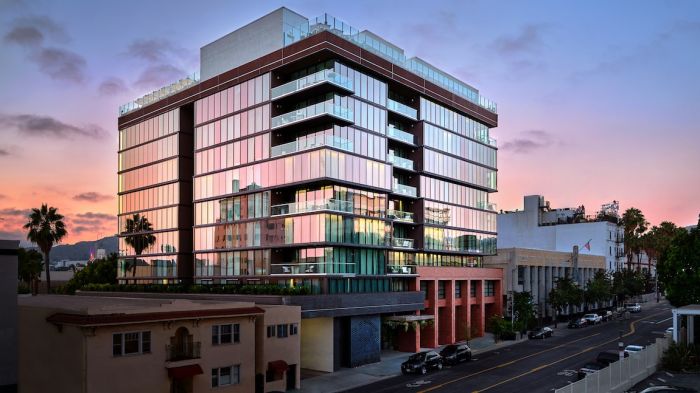 With its West Coast modern meets mid-century design vibe, stunning lobby and rooftop pool, this new see-and-be-seen spot near Hollywood and Vine (made famous in the 1920s for its concentration of movie and radio-related businesses) is best suited to style-minded travelers and staycationing Angelenos looking to sip cocktails, listen to music and stay up late dancing into the night on weekends. 1541 Wilcox Ave, Los Angeles. Visit hyatt.com for more information.

The Quintessential NOLA Getaway at the W New Orleans

How would you retrieve a spinnaker sail?

5 Recent Luxury Hotel Data Breaches You Should Know About

Troubleshooting Common MacBook Problems And How To Fix Them