Now in its third and final season, Netflix hit comedy The Kominsky Method sees Michael Douglas resume his role as acting teacher Sandy Kominsky, only this time Sandy is without his best friend, king of the sardonic aside, Norman Newlander, played by Alan Arkin. Douglas says it was “delicate doing without Alan for this season”, but that Arkin “did a lot without showing up”, as Norman seems to orchestrate the action even after his departure. With over 40 years of industry experience, both acting and producing—his first foray into the latter being One Flew Over the Cuckoo’s Nest in 1975—Douglas is currently relishing work on another installment in the Ant-Man franchise. Here, he muses on his career memories and recalls some film and TV favorites. 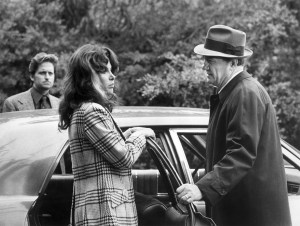 The very first day of The Streets of San Francisco, the AD said, “Michael, we just need to do a fast shot of you driving the police car around the top of Telegraph Hill.” So, I jumped in the car and Karl Malden was in the other seat. I pride myself on my driving and I must say one of the first lessons I learned is be sure that you check out the route maybe once before you just drive it. We flew around Telegraph Hill, we’re at the Fairmont Hotel, came to the end, and all of a sudden, we flew, we just went airborne. We hit the front bumper— bang—and I brought it to a halt and I went, “Oh, geez, I’m going to be fired.” And Karl says, “That’s not driving, that’s movie driving.” Then he said, “Alright, I’m going to back to my trailer to change my underwear.”

The Best Advice I Ever Received

I don’t know if I learned it on-screen, but the first advice that my father shared with me was the ability to listen. Actors tend to wait for their chance to speak, and then sometimes they’re not necessarily the best listeners, but acting is reacting. And so, listening is an important part. It was advice given to me by my father, but I can’t say it was something that I learned off the bat. I had to remind myself about it.

The Part I Always Wanted

I never dreamt about a part that I’ve always wanted, I’ve just dealt with the reality of what was in front of me. I was fortunate really early on with my first production with One Flew Over the Cuckoo’s Nest, to recognize how rare and how valuable a good part was. I knew how upset my father was about not playing R.P. McMurphy in Cuckoo’s Nest, and I could certainly understand it because that was a great part and they don’t come along that often.

I haven’t done a lot of comedy, but I don’t think comedy ever gets the respect that it’s due. You hardly ever see a comedy actor nominated for best actor, when in fact, comedy is much more difficult to do than drama. For me, it was really the chance to work with Paul Reiser and Alan [in The Kominsky Method]. They’re great at comedy, they have unbelievable timing.

I struggled early in my career, almost like a method actor trying to get to that point of true reality. It wasn’t really until later on, with Fatal Attraction, I said, OK, let’s see. So, he’s a lawyer in New York. Well, I could be a lawyer in New York. And he had an extra marital affair. Well, that’s possible. So, all of a sudden you say, wait a minute, it’s not so much about finding the character, it’s how much the character may be like me. And the hardest thing to do I think, is to play yourself.

Probably Sandy Kominsky, he’s got a lot [in common with me]. I was trying to work on that or that kind of simplicity of it. So, I think that was certainly one. And I can’t say he was all like me, but I liked Wonder Boys a lot, I think all the characters in Wonder Boys were well done. But I think Sandy’s pretty damn close.

The Movies That Make Me Cry

I remember Two for the Road with Albert Finney, one of my favorite actors. When I was a child, I remember the movie Lili with Leslie Caron made me cry a little bit. I cried too when my father was in Lust for Life. I remember when my father cut his ear off. It was such a real performance. It was one of the few performances when both my brother and I forgot it was our father, and we were just terrified, shocked. And when, when he cut his ear off…

My Most Tortured Co-Star

That would have to be Danny DeVito. Danny and I were roommates together in New York City before we ever began our careers. I took the piss out of him on Romancing the Stone, but he came back to us when he directed War of the Roses. I remember it was the big finale of War of the Roses with us hanging from the chandelier. It was awkward, very uncomfortable. And we got up there and said, “OK, we’re ready.” And Danny said, “OK, that’s lunch.” And they all walked out. They all left the studio. I said, “Guys, yo, yo, yo, hey, guys, guys!” And they left us hanging there for about 15 minutes.

The Most Fun I’ve Had On Set

Probably the Ant-Man films. You’re just such a small part, but you have all the incredible special effects going on and green screens. And you spend half the time putting dots on your face. It was a whole different type of filmmaking. I’ve never done any special effects movies before, or any sort of green screen. Paul Rudd was wonderful, Evangeline [Lilly] was great, and all of the other co-stars. That was a lot of fun. We’re starting at third one now. We’re going to London to do an Ant-Man 3 in July.

My Most Quoted Role

Wall Street comes up the most. And then after that it breaks down, there’s a lot of Falling Down that people like, Black Rain, and then of course you get both the Fatal Attraction and Basic Instinct stuff.

I’m a documentary fiend. I’ve done one period movie my entire career, all of my work is contemporary. I guess it’s sort of reality-based, so I just enjoy documentaries. My Octopus Teacher—I find that so poignant, not only the relationship was extraordinary between him and the octopus, but just the fragility of that man, too, dealing with sort of a breakdown and getting himself back in order.

Who’d Play Me In My Biopic

John Krasinski. Because of his compassion, his humor. Compassion and humor can take you a long way. I sense in him that he makes a conscientious effort where the material is good to try different types of roles.

18 Loki Trailer Details We Need To Talk About Now