Learning curve: ‘The hurricane had us confined to the aft cabin for 24 hours’

After the challenge of an Atlantic Crossing there’s  no better reward than to cruise the Eastern Caribbean. But what happens when the sailing season ends and the Atlantic hurricane season begins?

For most cruisers it’s either haul out and tie down to return later in year, or head back to Europe  via Bermuda and the Azores. 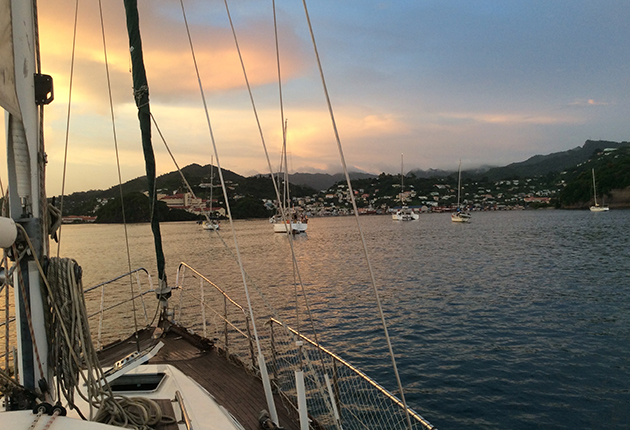 However, that isn’t the case for everyone.

In 2017 my partner Simon  and I, together with our 10-month-old daughter Daisy and Scrumpy the Jack Russell, decided to sail from Antigua to Grenada for our first hurricane season  in the Lesser Antilles.

Little did we know it would also be the first year on record that the Leeward Islands are hit by not just one, but two category 5 hurricanes.

Many boats flock to Grenada to comply with their insurers’ terms and conditions.

At a latitude of 12˚N, the island is technically outside the hurricane belt. However, it still averages one hurricane every 50 years.

In May we started making our way slowly from Antigua. Keeping a close eye on the weather was imperative to our safety, allowing us to evaluate our short-term passage plans.

Tudor Rose, our 37ft Colvic Countess, was tied to a mooring buoy in Marigot Bay, Saint Lucia, when Tropical Storm Brett was forecast to pass between  Saint Lucia and St Vincent and the Grenadines.

Monitoring its projected route and strength as it established  itself was unnerving and put our decision-making abilities to the test. 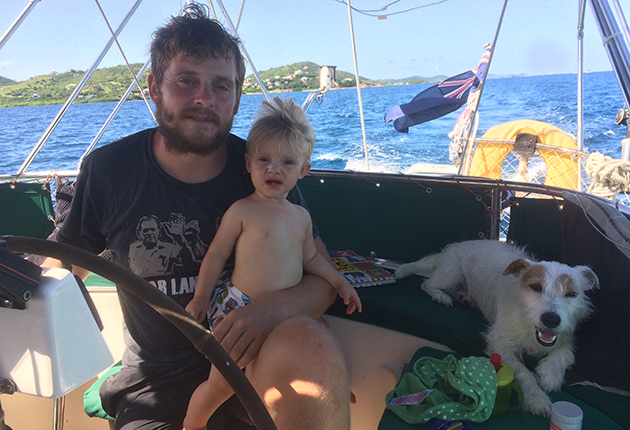 With sustained winds expected at  40 knots I wasn’t overly worried as we’d experienced 60-knot winds in Portugal, but this had been in a walled marina so there were still some concerns whether  a berth alongside in Rodney Bay might be a safer option.

We spoke with fisherman and other seasoned cruisers, and concluded it was safe to stay on the mooring.

In the end the track changed and the storm made landfall at Trinidad, 200 miles away.

But planning for it did provide us with a good dry run.

It was now apparent we’d need the most up-to-date weather reports when confined to the boat, so we purchased a data package on a local SIM card.

Another valuable lesson came in the form of Storm Don, whilst at anchor in Bequia, St Vincent and the Grenadines.

The National Oceanic and Atmospheric Administration (NOAA) issued a warning, forecasting a night of 40-50 knot winds.

We were happy to ride this one out, but my nerves were definitely on edge being at anchor. 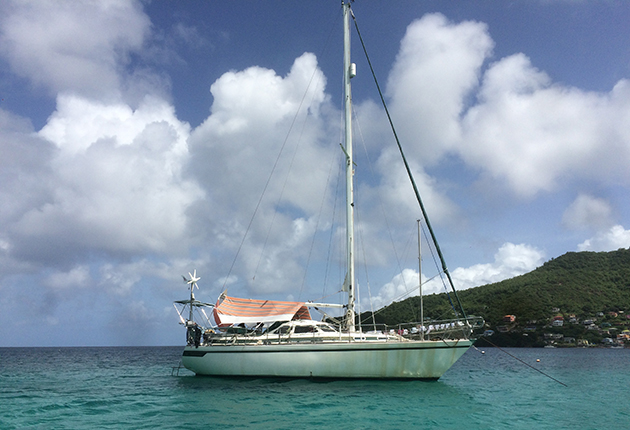 We put a watch rotation in place, stowed away loose items and cleared the cockpit to allow quick and easy access to the helm if required.

The storm was short-lived, with sustained 40-knot winds only lasting  1 hour, but we dragged 30m, despite ensuring the anchor was well set.

It wasn’t a very comforting experience.

Fortunately we’d allowed plenty of space between us and other boats so we didn’t hit anyone.

After this close call we quickly exchanged our 15kg Bruce anchor for a 25kg CQR!

Holed up by Hurricane Harvey

Next, Hurricane Harvey hit the Caribbean as a Tropical Storm reformed into a hurricane and made landfall at Texas, USA.

Although most of the strong winds occurred away from the islands, sea conditions in our bay rapidly changed.

Normally protected from the East Trades, the bay was rough due  to westerly swells. 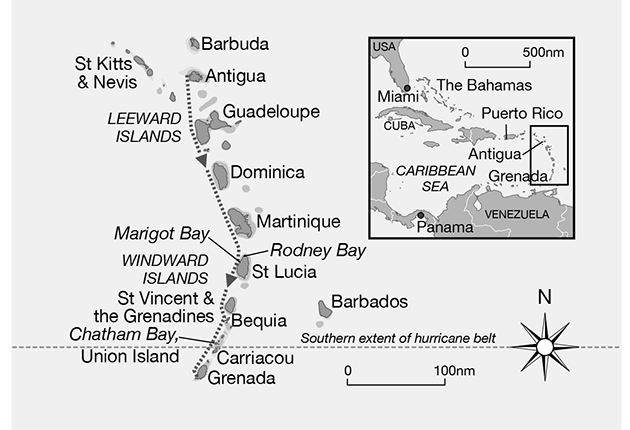 Holly and Simon made their way down the Caribbean chain. Credit: Maxine Heath

Strong seas and breaking waves drove boats towards the shore. Docks were destroyed and boats violently bounced and jerked against their anchor chains.

In search of comfort and safety for Daisy we were confined to our aft cabin for almost 24 hours.

It was frustrating but we knew it wouldn’t last forever; you just learn to get on and deal with it. 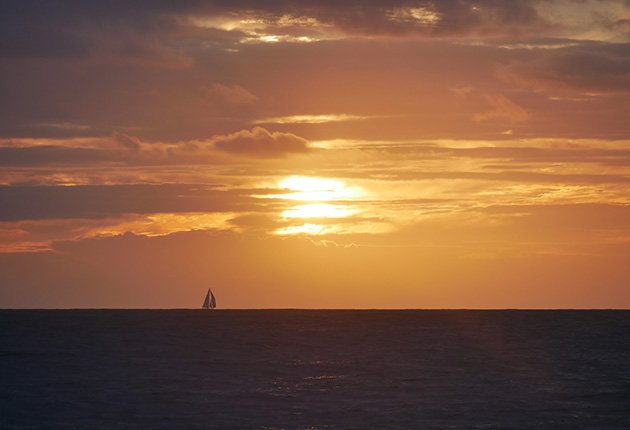 Confined to quarters during the pandemic, many sailors are itching to slip their lines and sail for the sun. Elaine… 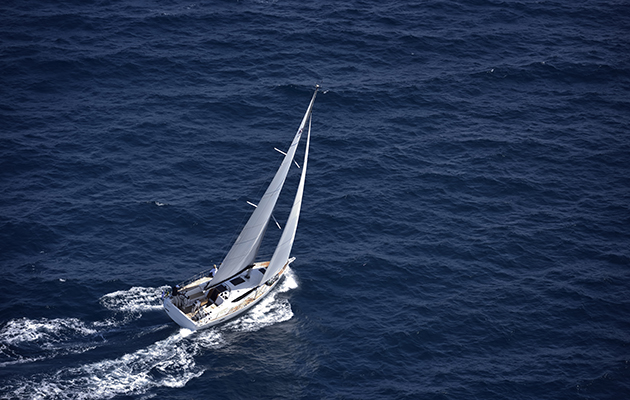 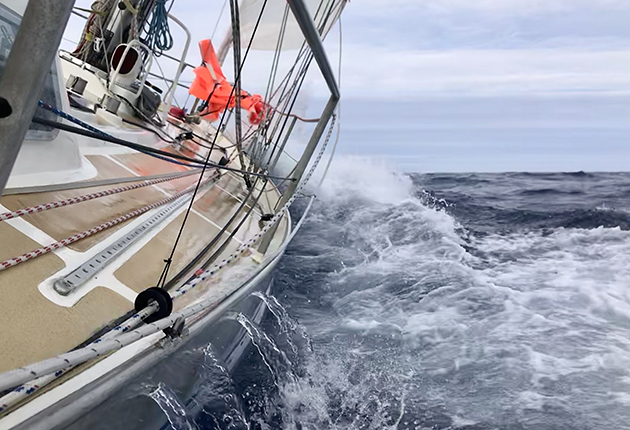 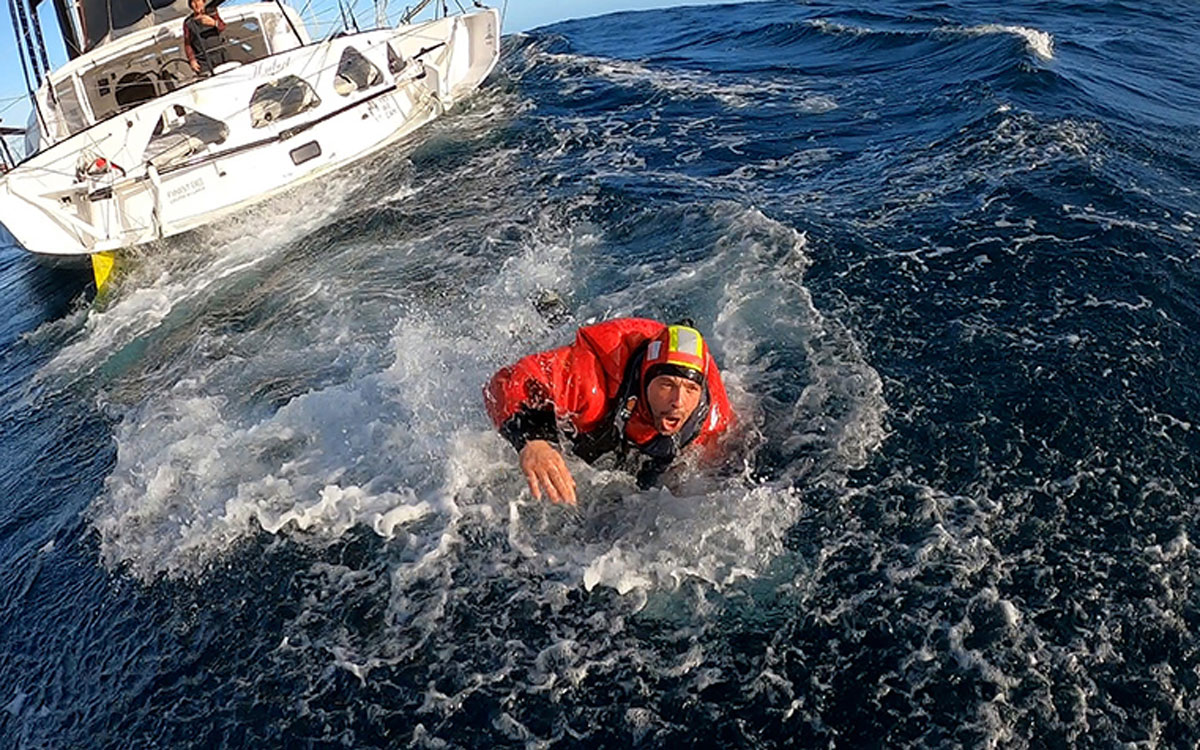 When Kevin Escoffier’s boat sank in the Southern Ocean within two minutes, he was rescued by fellow Vendée Globe competitor…

We soon developed a strategy; for a low category hurricane (64-85 knot winds) we’d proceed to a hurricane hole, put out a stern anchor and drive the bow in to the mangroves.

If – Heaven forbid – a major hurricane of over 100-knot winds was coming our way, Simon would sail the boat by himself out of its path, most probably south to Trinidad, while Daisy and I sought shelter on land.

We reached Grenada on 29 August,  a little later than expected.

Anchorages were full of liveaboards seeking  refuge and it was a challenge to find  a suitable holding with adequate space between other boats.

Sometimes the swells made the bays roly and uncomfortable. 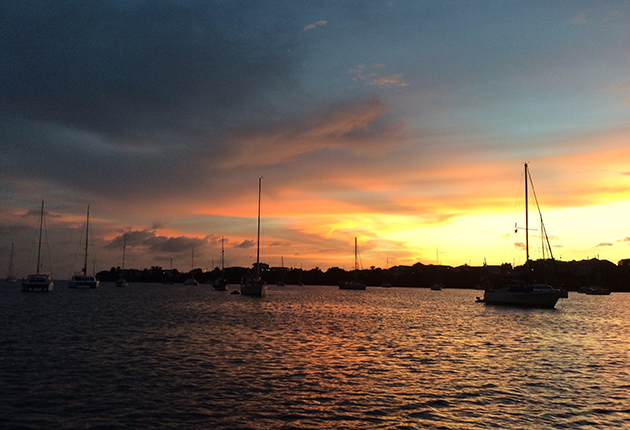 Cruisers converge on Prickly Bay in Grenada every year for hurricane season. There is a great community fell and lots of mutual support. Credit: Holly Turner

What really made this place special, though, was  the overwhelmingly friendly and supportive sailing community.

Seafaring folk don’t tend to hang around in one location for long, so having hordes of them congregating annually has made Grenada quite the social scene during hurricane season!

Local drivers put on ‘shopping buses’ and if you need out-of-hours assistance you can call on the cruisers’ VHF hailing channel. 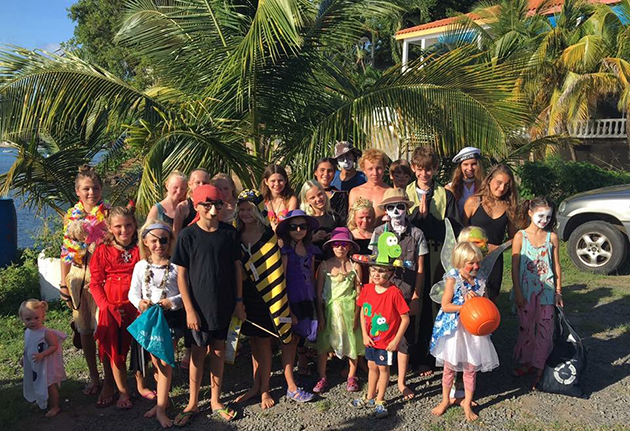 The community spirit provided us with some much-needed stability throughout a very turbulent period, and we made so many friends.

It truly was an amazing two months in our adventure.

Unfortunately whilst all this was taking place a mammoth cyclone of devastation was about to tear its way through the Leeward Islands.

Irma was the strongest storm ever to form within the Atlantic before hitting the Caribbean.

It intensified from a tropical depression  to a hurricane within 30 hours and then into a major hurricane two days later. 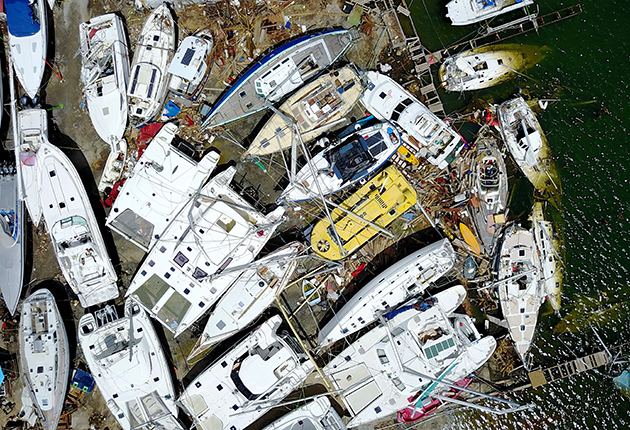 St Martin in the aftermath of Hurricane Irma in 2017. Credit: Getty

Then two weeks later another category 5, Maria, turned out to be the costliest on record, hitting Dominica and Puerto Rico and causing a catastrophic loss of lives.

Well away from both tracks, we were safe, but hearing of the aftermath through friends and social media was heart-wrenching.

On our Caribbean Facebook groups we saw submerged monohulls, upturned catamarans, and rows of charter yachts secured in the mangroves turned into piles of scrap.

People lost their homes and were left with no water, electricity or food.

Many did what they could to help, donating provisions, equipment and tools, and when the season finally came to an end, we all breathed a huge sigh of relief.

The National Oceanic and Atmospheric Administration (NOAA) hurricane centre monitors cyclones and disturbances in the Atlantic to predict if a depression will form into a storm.

As soon as one develops, it’s trailed by planes, analysed from space, examined from the ocean and penetrated by drones and ‘dropsondes’ (weather reconnaissance devices).

The data is put  into models that predict the track and intensity of the storm, which can be days or weeks in advance of it progressing to a hurricane.

The National Hurricane Center website, run by NOAA, is a vital source of information to cruisers remaining in the Caribbean over hurricane season.

It’s updated every six hours and issues a tropical storm or hurricane ‘watch’ 48 hours in advance, changing to a ‘warning’ 36 hours in advance of tropical-storm-force conditions.

The Magic of Software Robots

Video: Post-race, Pip Hare takes us onboard her Vendée boat

Pacific castaway: Marooned for months in a pandemic