The fastest monohull ever? Meet the ClubSwan 125

Arguably the most eagerly awaited new yacht of modern times, the radical ClubSwan 125 is launched and sailing

Nautor’s Swan announced it was to build a record breaker in 2018 and it’s been a long wait living on the teaser renderings of its ambitious new ClubSwan 125. 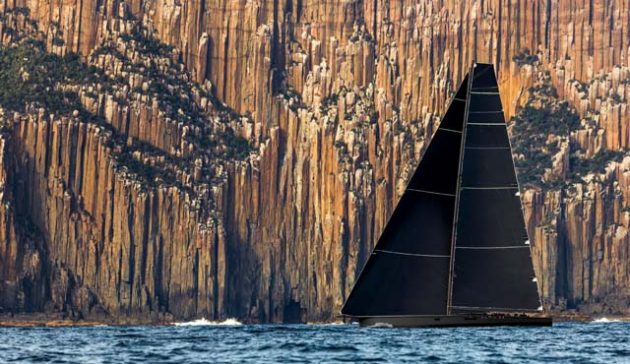 An early rendering of the ClubSwan 125 hinted at serious performance

Now the black and yellow rocket ship, named Skorpios, has launched from Swan’s Pietarsaari yard and as you can see from the sail trial pictures, it is one powerful-looking performance machine.

Enrico Chieffi, Nautor Group vice president and ClubSwan 125 project leader says this is “the flagship in all respects of our yard” and describes how the brief changed from a fast inshore racing superyacht to a record breaking leviathan. “The boat has been developed to be very successful in offshore racing and attempting to beat the monohull records around the world.” 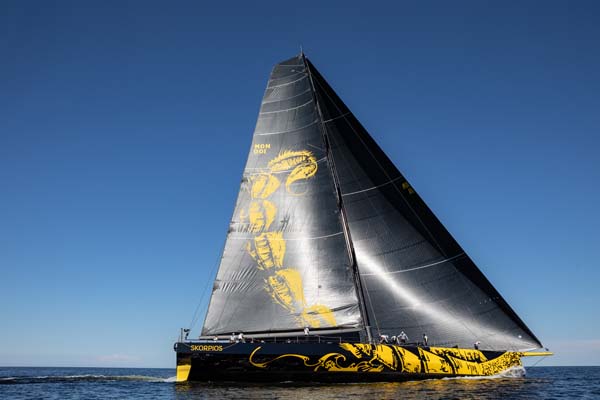 Photographs from the latest sail trials of the ClubSwan 125 don’t disappoint – check out that sail area!

The first major test for the Swan flagship looks set to be the Rolex Fastnet Race this August. Bearing in mind that Skorpios has the draught of a small container ship at 7.4m, it could be a stressful event for her navigator. With an overall length of 42.6m including bowsprit, Skorpios will overtake the Baltic Yachts built Nilaya as the biggest monohull ever to enter the Rolex Fastnet Race. 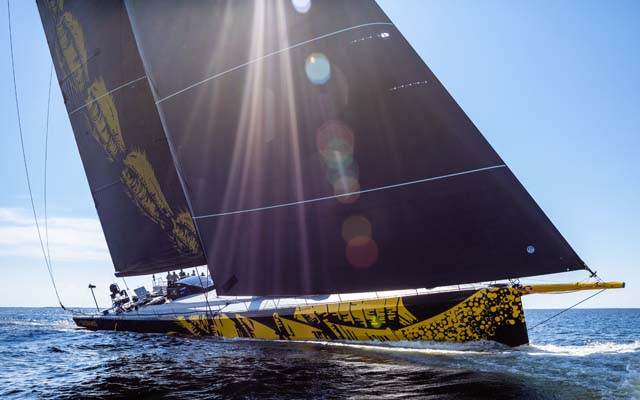 In 2016, Nautor’s Swan launched the innovative Juan Kouyoumdjian-designed ClubSwan 50, the first non-Frers Swan in four decades. It proved an instant success and became a European Yacht of the Year winner. But perhaps the even greater result of that partnership is the birth of this new supermaxi.

The ClubSwan 125 shares some of the ClubSwan 50’s aggressive design traits, including a mast stepped particularly far aft and raked aft, which, together with that extensive bowsprit, creates an enormous J area for furling foresails. 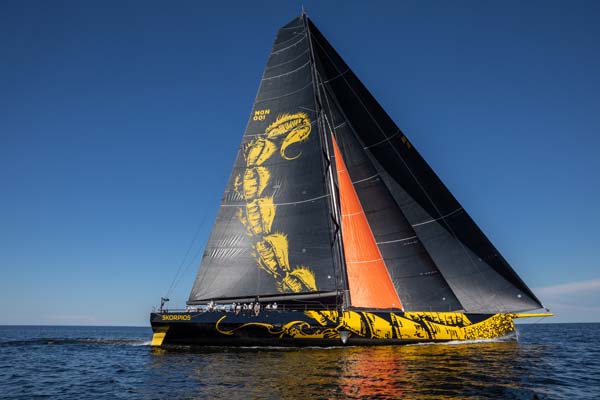 The jib area alone is 413m2 and Skorpios can set almost 2,000m2 of sail, enough to cover seven and a half tennis courts. Her sail area to displacement ratio (over 65) is simply off the charts.

“Designing a racing sailboat, able to reach a speed in the region of 15 knots upwind and that will always be faster than the wind speed downwind is something unique,” enthuses Juan K.

The cockpit cuddy, which looks like it was inspired by the X-Wing fighters on Star Wars, makes the Swan reminiscent of his iconic Volvo 70 design. 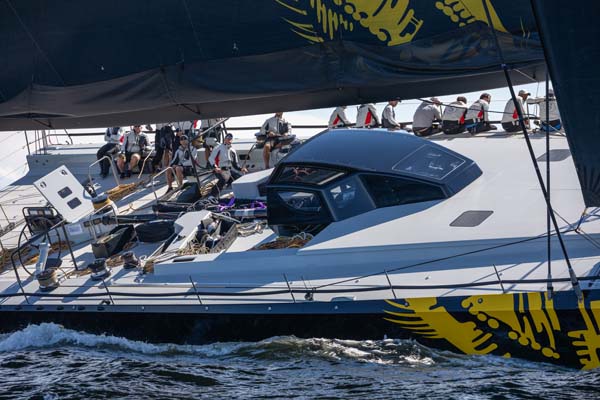 The Argentinian designer says that in order to keep the displacement under 60 tonnes – which is ridiculously light for the ClubSwan 125’s length – they opted for a canting keel. This allowed the team to achieve the necessary righting moment with a smaller bulb to keep weight down, he explains. 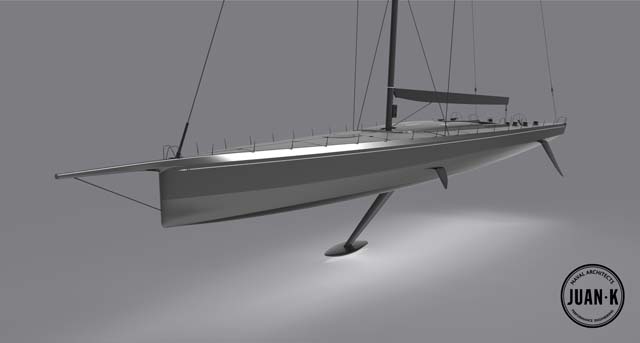 A unique single, curved daggerboard or rotating C-foil with an asymmetrical profile was developed, an upscaled version of the ClubSwan 36 foil. This can be set on either side in a similar fashion to the DSS foil used on the 142ft Canova and was designed to create both sideways and vertical lift, as well as to reduce hull drag.

It is hydraulically controlled and helps to get the boat out of the water when reaching, described as ‘skimming’.

The ClubSwan 125 boasts enough beam carried aft to park a 28ft sportsboat across its transom. Twin rudders are used to keep control and because the ClubSwan 125 will always sail heeled. 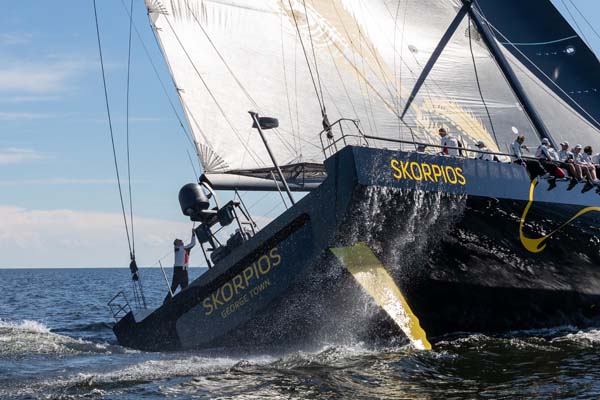 The rudders sport Juan-K’s trademark sawtooth profile which he compares to the tubercles of a whale. These were first seen on Rambler 88 and are designed to limit drag when dipping in and out of the water and to prevent the blades from stalling.

Such an ambitious project requires a formidable team. Project manager Bob Wylie, is responsible for the deck and sail handling of the ClubSwan 125. The deck gear comprises the latest Harken carbon and titanium products. “It’s rare to see innovation in so many areas on one boat,” says Peter Harken. “What a rocket ship!” 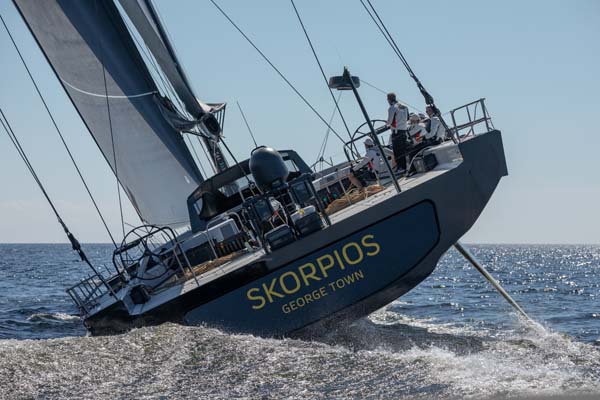 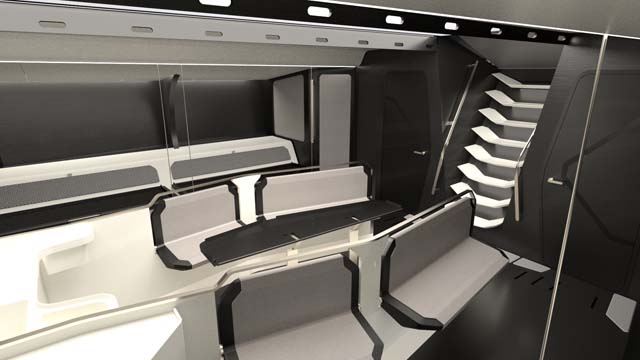 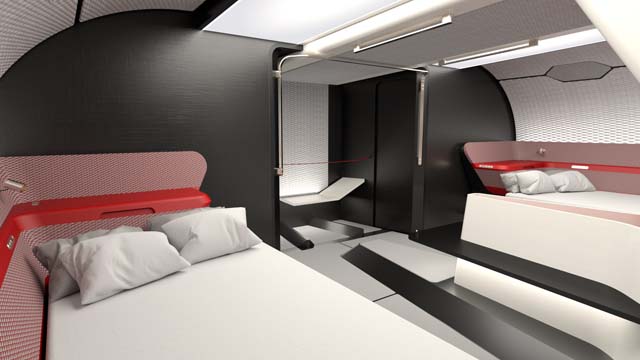 The keel, bulb, daggerboard and rudders were manufactured by Italian carbon specialist Eligio Re Fraschini S.p.A. The hull of this first ClubSwan 125 has been painted a gleaming black and wrapped with a yellow design that runs from the tip of the imperious bowsprit to the twin rudders aft and is echoed on the North 3Di mainsail. 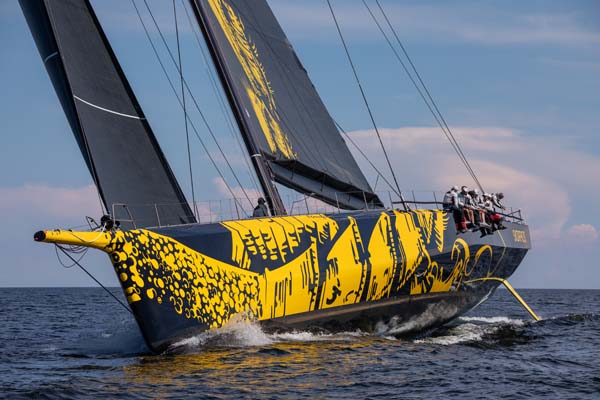 “I truly believe the ClubSwan 125 will raise the stakes in the sailing world and set a milestone in the whole marine industry,” thinks Juan K.

Nautor Group CEO Giovanni Pomati describes Skorpios as ‘a beast’, while its president Leonardo Ferragamo says: “The project has been amazing and the opportunity to work together with the greatest boat builders, designers and technicians around the globe, was awe-inspiring”. 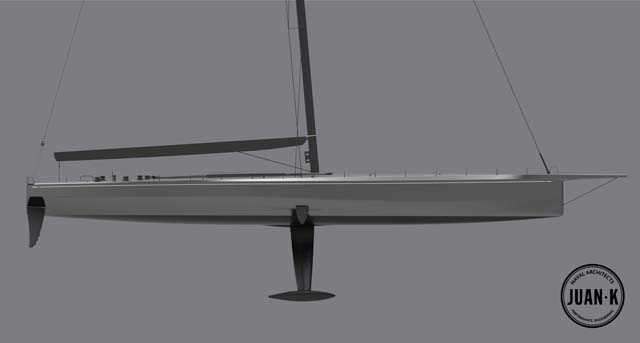 Luxury in Monaco: A Guide

Looking To Purchase a Fabric Lounge? Follow This Guide!