Surviving a Force 11 storm with a series drogue

Small cruising boats are not fast enough to sail away from bad weather. Tony Curphey shares how a series drogue was vital while sailing the Southern Ocean in a Nicholson 32

Surviving a Force 11 storm with a series drogue

There is no textbook procedure to follow when, in a small boat, you are faced with seas and winds which are a threat to the survival of you and your boat.

Every storm is different and so is every boat and circumstance.

I’m writing from my own experience of Southern Ocean sailing and about 16 deployments of my Jordan Series Drogue, four of which were on my last voyage as a participant in the Longue Route 2018 (which like the 2018 Golden Globe Race, was held to mark the 50th anniversary of the event).

My boats in the Southern Ocean have been 27ft, 32ft and 41ft overall length in the past 17 years.

It is good practice to heave-to by whatever means your boat will do that, even if just for a rest from gale conditions. 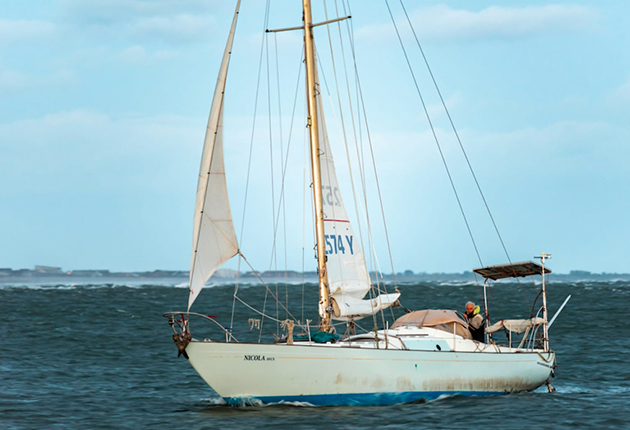 Tony’s Nicholson 32 has proven to be a tough seaboat, even in the Southern Ocean. Credit: Tony Curphey

It’s a huge relief to have the sudden calm.

If weather conditions worsen, some sailors advocate lying ahull which usually means letting the boat take its own position in the sea with no sail up, and having the helm lashed to the lee to try to keep the bow a little into the wind.

Both these tactics are fine in moderate or even severe gale conditions, but as wind and seas rise beyond gale force it is necessary to change tactics as the boat will be knocked down and that is a prelude to being rolled, in which case the mast will probably be lost.

I might mention that it is proven that the longer the vessel is, the less likely she is to be rolled. However most boats will be rolled, regardless of length, if caught sideways in the trough of a wave.

My present boat, Nicky, a beautiful Nicholson 32 Mk X, will run downwind under control with the Aries (or other windvane) steering, with or without any sail up until Force 10 or even 11. 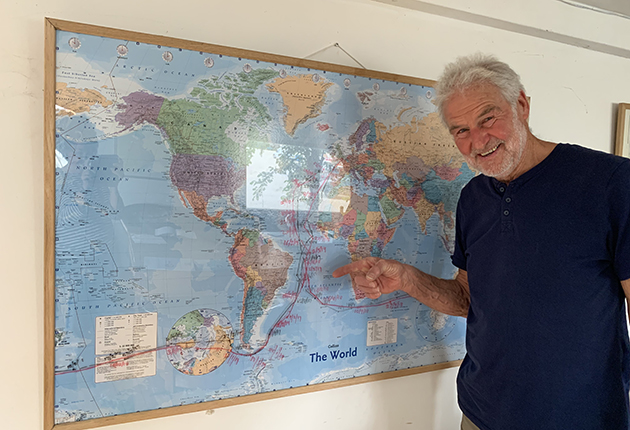 You can’t go directly downwind because the sail will back and fill with tremendous force and will soon destroy itself.

It is better under these conditions to have no sail up. If the Aries can’t handle it any more the boat will broach and will be in danger of being rolled.

If the hull is fouled, as Nicky’s was in the Southern Ocean on my last voyage, she will go out of control sooner.

Then it’s time to start thinking of survival.

In my case I use the Jordan Series Drogue which I made myself about 17 years ago.

If the direction in which you want to go is upwind then you will probably be thinking of putting out a drogue, or something to slow you down, much sooner.

One man, or woman can only hand steer for so long under these violent conditions. And I mean violent!

But usually in the Southern Ocean the systems are moving from west to east so with a drogue out you will be making 2 knots or so in the right direction or more likely to the north east or south east.

It is a better idea to deploy the drogue from the inner end, that nearest the boat, into the water first. 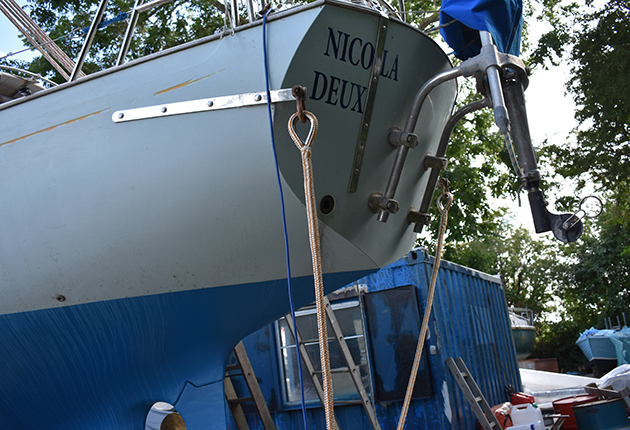 Purpose-build chainplates are required to take the load of the drogue bridle on each quarter. Credit: Tony Curphey

It goes out under more control and is less likely to snag cones or anything else.

Make sure the drogue does not foul the windvane servo paddle if you still have one down.

Last of all drop in the 25lbs weight and make sure it is clear of the bridle.

On Nicky my drogue is led out under the lower guard rail on the port side.

If you deploy under the rail directly astern, drop the weighted end in first but be careful because it will be snaking out fast and a lot of weight will come on to it as the cones start their work.

Once deployed, the drogue will quickly pull the stern into the seas. 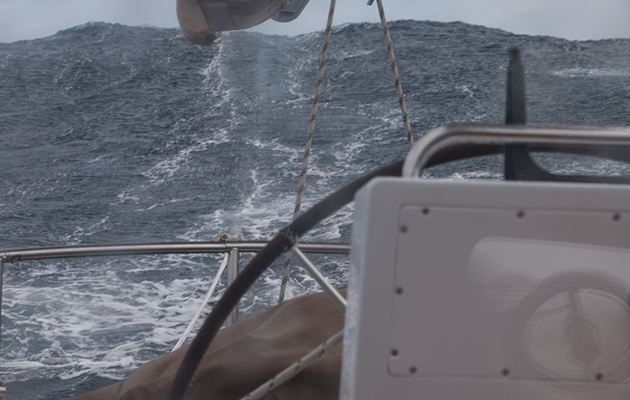 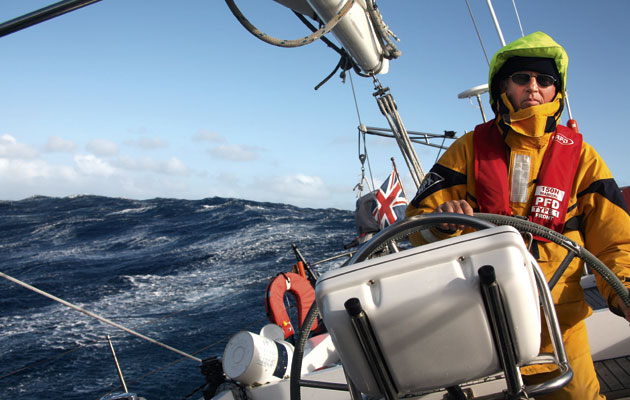 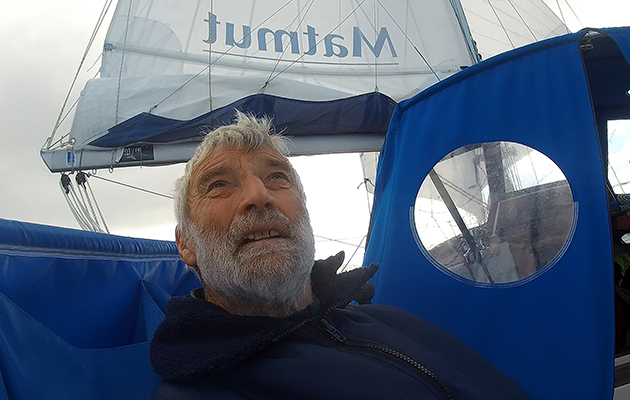 Golden Globe Race skippers share their experiences of ocean storms, providing lessons for all of us about how to cope… 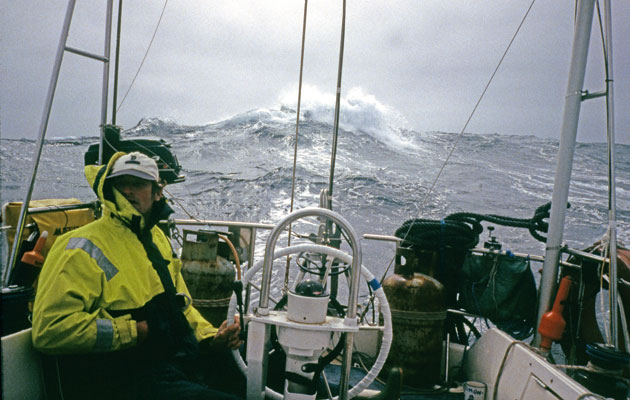 Award-winning sailor and expedition leader Bob Shepton regularly sails some of the most storm-swept latitudes in the world. Not bad…

In a confused sea, a breaking wave strike may come on the quarter but the drogue will pull the stern to the seas within two seconds.

I have experienced that many times.

There is tremendous force on the fittings where the drogue is attached so it is essential that these fittings are built accordingly strong.

Yet, there are no shock loads on the boat or fittings because of the elasticity of the drogue.

It’s like being on a huge bungee, contrary to a single element cone or parachute drogue whether on the bow or stern.

The series drogue is always deployed from the stern on a monohull. 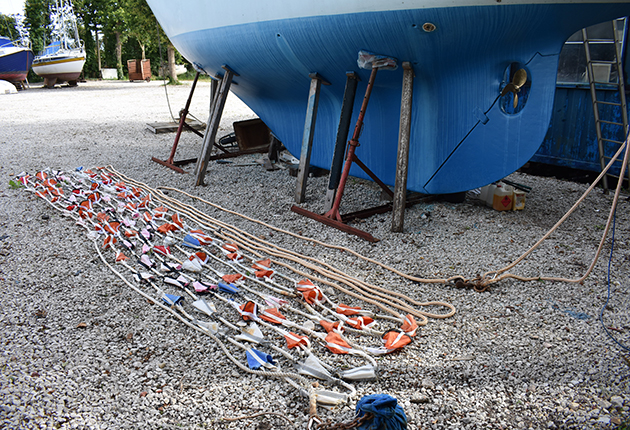 Thicker, stronger rope as you get closer to the boat where the loads are greatest. CreditL Tony Curphey

Fold down and lash the sprayhood and anything else which could be damaged or swept away.

Solar panel gantries are vulnerable. I do have one and have sustained damage there.

Lash the tiller or wheel amidships and scoot below with the servo paddle, securing the companionway hatch on the way.

A good shot from the whiskey bottle is now a plan; your series drogue will look after you.

On Nicky I have a fast closing hatch which can be opened or closed from inside or from outside, with one hand if necessary and it can be dogged down like a submarine door.

It is made from 18mm polycarbonate, is see-through, very strong and totally watertight. 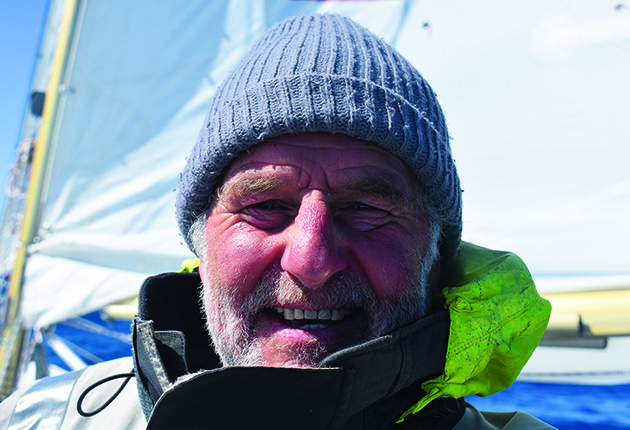 Tony Curphey was 74 when he completed the Longue Route. leaving and returning to Emsworth, UK. Credit: Tony Curphey

A standard companionway hatch with washboards may be strong enough but it will not be watertight.

When you have a striking wave hit from astern, water will squirt all over the cabin.

It is awesome in the old-fashioned sense of the word to watch the weather from behind the see-through hatch.

Those moving mountains which sometimes pile up on top of each other and seemingly drop from the sky as the top breaks and topples over and buries the boat from astern.

The most unnerving part is the noise; the screaming and howling of the wind. 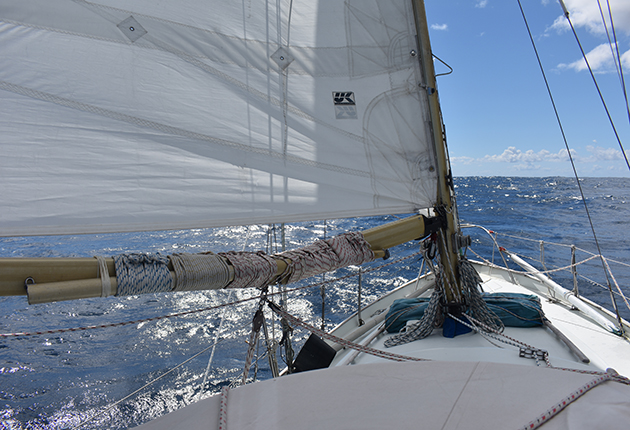 During the Longue Route, Tony Curphey had to deal with all sorts of gear failure including a damaged boom, which he lashed, following an accidental gybe. Credit: Tony Curphey

That gives you the first indication that the storm is easing as you suddenly realise it is not so noisy. But not yet.

The barometer is rising, the wind could be at its strongest now and there will be a windshift and the seas become confused.

The series drogue is doing its work through all this but it could be some hours before the confusion of the opposing seas allows the movement to ease enough to work safely on deck and bring in the drogue.

There are many stories about the difficulty of recovering a series drogue.

It’s very physical but you have to be patient and just take in the slack as it occurs and keep a turn on the cockpit winch.

Getting it started is the hardest part.

Some have suggested using a trip line but don’t be tempted.

It will end up in a huge mess and seriously jeopardise the efficiency of the drogue.

However, I do use a trip line to the end of the bridle. 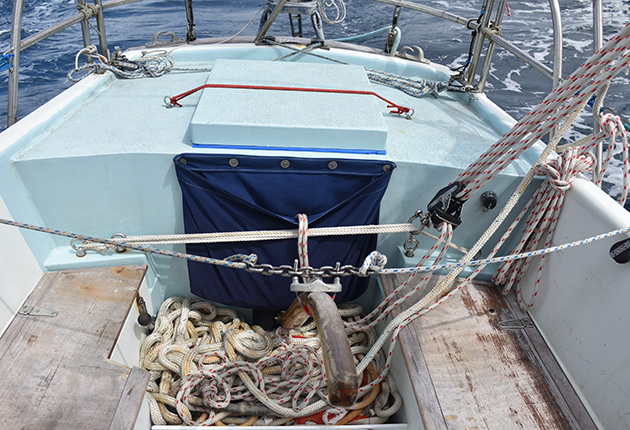 It is looped just aft of the shackles which join the bridle to the main drogue.

If you use a bowline for this purpose, make sure it is tight and has a couple of half hitches around the standing part, for even a bowline will shake itself loose without weight on it for many hours.

The other end of this trip line is made fast to the railing on the port side.

This is a great help and there is no chance of it tangling with the drogue.

It normally takes me 30 to 60 minutes to recover the drogue and then it is carefully flaked down behind the small bulkhead with the weight at the bottom to go out last, all ready for its next use.

How to make your own Jordan Series Drogue

A lot of yachtsmen have heard of a series drogue but very few have used one in anger.

They are time consuming to make and expensive to buy.

My drogue is made in three lengths all shackled seriously together.

The final length, the one furthest from the boat, is of a smaller diameter rope because there is less strain there. 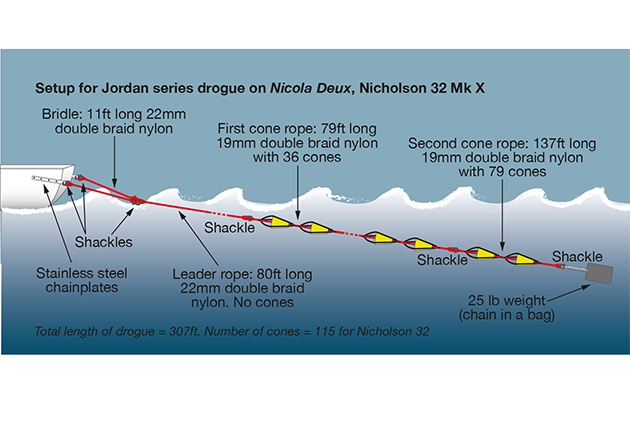 Each arm of the bridle is shackled to a dedicated chainplate on each quarter of the hull.

This is by far the best way to attach the drogue to the boat.

Mine is permanently shackled to the boat and is flaked down at the after end of the cockpit behind a small bulkhead to stop it sliding forward, and is held with two quick-release lashings so it is always ready for quick deployment.

The bridle is joined to the main length of the drogue by more shackles which are tightened and carefully moused with seizing wire.

Along the length of the drogue are small cones or parachutes.

The number of cones required depends on the displacement of the boat. In the case of a Nicholson 32 it is 110 cones.

It is important to have the correct type of rope, double braided nylon which gives the elasticity and strength, and the bungee effect.

Full details can be found at www.jordanseriesdrogue.com

What To See With One Day In Zurich, Switzerland

Across the Atlantic in a £1500 ferrocement schooner

Ancient history: 5 archaeological hot spots to visit around the world

Vahdam and TWG Teas are The Finest Tea in the World