Some types of corrosion are easy to spot, but stress corrosion cracking has the potential to weaken your rig with very little warning, says Vyv Cox

Some of the more common failure modes of the metals used in boats are generally quite well understood by yacht owners today, when internet searches and forums make topics that used to be solely the regime of specialists readily accessible to all.

However, some means by which metal parts can break remain somewhat more clouded in mystery, few more so than stress corrosion cracking.

In similar fashion to fatigue cracking, stress corrosion cracking is one of those failure mechanisms that can remain hidden for a long time, suddenly giving way when stress levels cross a certain threshold which, as is the way of these things, is usually at the most inconvenient time for the yachtsman.

To be technically correct, I am discussing the version of it that occurs in chlorides (such as salt water), whereas another that occurs in sulphides can be ignored for this article.

Stress corrosion cracking, as the name suggests, is one of those failure mechanisms that relies on a combination of two factors.

Either stress or corrosion alone would not cause the failures that are described in the article.

Further to that there is a threshold temperature below which the problem should not occur.

Most grades of stainless steel are susceptible and much research effort is expended in trying to improve the performance of this important class of alloys in high-chloride environments.

Stress may be external or internal.

An external stress is one that is applied – for example a tightened bolt, tight rigging or component under tension.

Internal stress is generated in the manufacturing process, for example a cold stamping operation used for many fittings such as shackles, or high-tensile bolts. 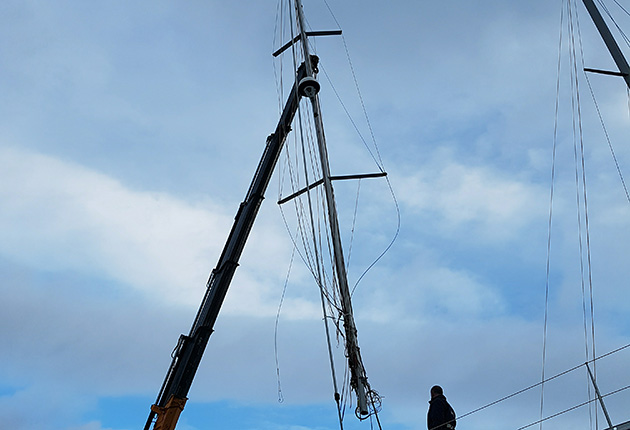 Winter layup is a good opportunity to unstep your mast and inspect your rigging, but don’t forget to check chainplates, bolts and deck fittings as well

A good example, shown later in the article, is roll swaging, the process by which the terminal fitting is attached to the wire of a shroud or stay.

The initially soft metal of the fitting is pressed with high force into the lay of the cable, thereby strengthening the joint and imposing internal stress.

There is a direct relationship between strength and hardness, and there is a ‘magic’ hardness value below which stress corrosion cracking is not a problem.

The figure usually given is 22 on the Rockwell C scale, equivalent to 246 Vickers, not a particularly high value that is easily achieved in practice.

If the component is already hardened by a manufacturing technique, any subsequent external application of force can push the stress level above the threshold.

The corrosion part of the term is somewhat complex.

Stress corrosion cracking is known to occur in very weak aqueous solutions containing only a few parts per million of chlorides.

Seawater is plenty strong enough to cause it under certain conditions.

The most likely cause is alternate wetting and drying, causing a gradual increase in the concentration of chloride ions that, in combination with the stress, can penetrate the metal via its grain boundaries. 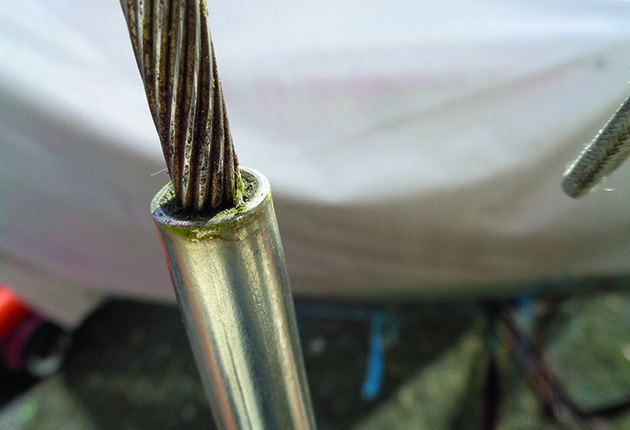 Joints and connections that are permanently damp are particularly at risk.

The third requirement for stress corrosion cracking to occur is temperature.

In theory, the problem does not occur at temperatures below 50ºC, but surprisingly high temperatures can be generated on deck, even in the UK’s temperate climate, on sunny days.

In the Mediterranean of course such temperatures are easily met.

I have included examples from both warm and cool climates here.

Similarly to fatigue failures, the component can appear to be in perfect condition until it suddenly fails.

Unlike fatigue though, the failure is not due to a single crack but a network of cracks, sometimes likened to the branches of a tree, formed as the corrosive chlorides permeate along the grain boundaries of the metal.

The fracture face has a rough, rusty appearance, with many subsidiary cracks visible. 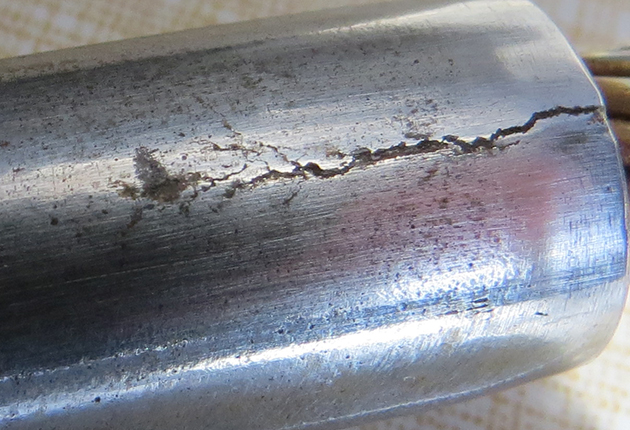 I was sent this fitting (above) after a rig inspection condemned it.

This was the lower swaged fitting of a cap shroud, always likely to be more susceptible to stress corrosion cracking thanks to its upward-facing open end.

The fitting looked rusty, and therefore suspicious, although the cracking near the wire was almost obscured.

Cleaning up the fitting with fine abrasive paper revealed the characteristic branched cracking of stress corrosion.

The stress here is mostly internal, due to the strengthening brought about by the action of the swage machine.

Corrosion commenced at the right and gradually penetrated the metal along its grain boundaries. 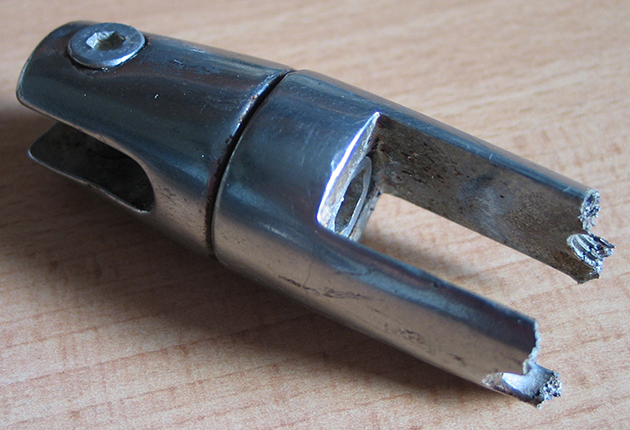 Sudden, loud failure of this swivel resulted from stress around the connecting bolt. Credit: Vyv Cox

In 2005 we were anchored at San Antonio, Ibiza in absolutely benign conditions.

The wind was very light, the harbour was sheltered and we were sitting in the cockpit.

Suddenly we heard a bang from ahead (sudden fracture, with characteristic noise, is a feature of stress corrosion cracking) and we realised that we were drifting backwards.

I hauled in the chain and to my surprise found no anchor on the end.

I shackled on the kedge anchor and later we were able to find the bower anchor with help from some divers.

The swivel (above) fractured in four places, each side of the inter-screws attaching it to the anchor.

The rough, fissured appearance is typical of stress corrosion cracking.

It was after this incident that I began to study the strength and metallurgy of anchor swivels (see YM Oct 2020). 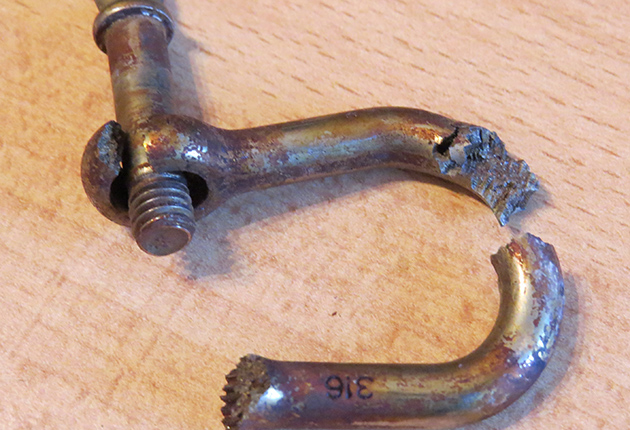 Sunshine, salty air, internal stress and stresses in use cause this shackle to fail in three pieces. Credit: Vyv Cox

My daughter races a Hurricane catamaran.

This shackle (above) is part of the mainsail downhaul tackle, a component that is subjected to a great deal of force in this type of craft.

When not being raced, the shackle is exposed to the sunshine of the UK’s south coast.

Onshore inspection revealed that this shackle was in particularly poor health, having fractured in three places due to stress corrosion cracking.

The shackle was probably manufactured by cold stamping, providing internal stress, then subjected to external stress during racing.

The dinghy park is close by the sea and subject to typical salty atmospheres. 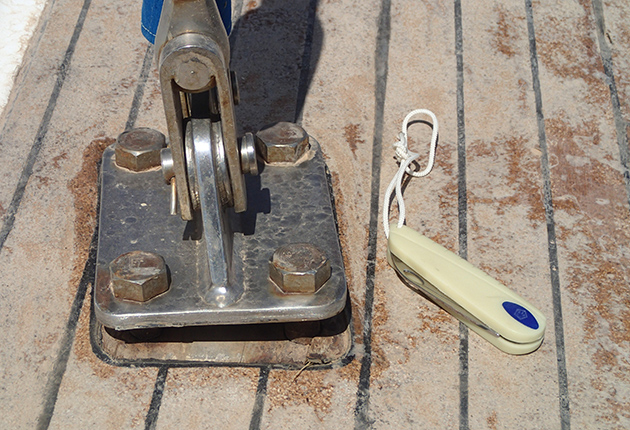 Chain plate bolts above: Chain plate fittings lifting from the deck or surrounding deck deformation is not a good sign. Credit: Vyv Cox

I was asked by the owner of a Westerly Oceanmaster to look at a problem identified by the boatyard in Greece where his boat was currently ashore.

They had noticed that the upper parts of both upper and lower port-side chain plates were lifting from the deck (see picture above).

The chain plates comprise upper and lower parts, bolted together through the deck.

The lower part inside the boat is substantially built, with double-nutted bolts protruding from above the deck (see picture below). 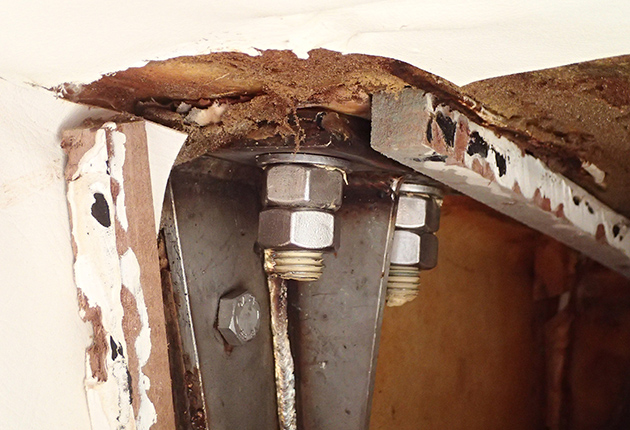 Chain plate bolts below: Although the internal structure was solidly built, two of the bolts had failed. Credit: Vyv Cox

Two bolts on each plate had fractured and were quite easily removed.

One of the bolts is shown below, illustrating the typical appearance of a stress corrosion cracking failure. 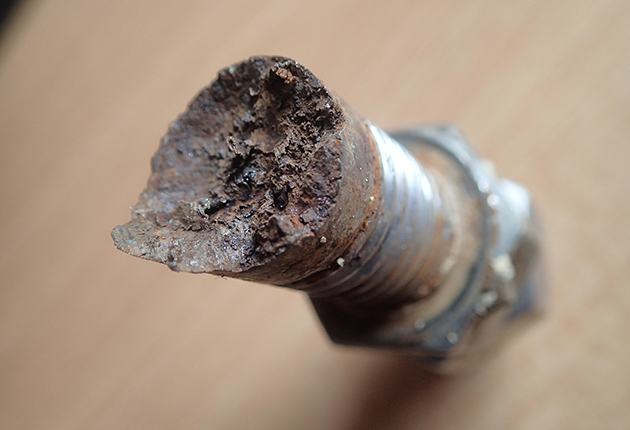 The metal has rusted over a long period, the very rough appearance being due to the intergranular penetration of the chloride-rich corrosive liquid.

It was subsequently found that of a total of 16 bolts holding four chain plates, eight were fractured, as shown below. 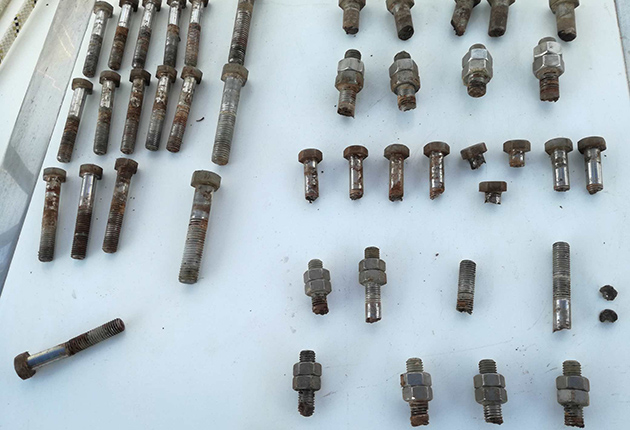 Of the 16 chain plate bolts, eight were found to have failed through stress corrosion cracking. Credit: Vyv Cox

There is no pattern to the fractures: they occurred on either the unthreaded or threaded parts of the shanks and in one case there were two fractures.

The fundamental cause of this problem is the absence of sealant around the bolts and between the chain plates and deck.

The teak deck probably played a part, in that even in hot sunshine the area under the chain plate remained damp.

It was fortunate indeed that the problem became obvious before the boat was relaunched, as there can be little doubt that the rig would have been lost during sailing.

The owner rebedded all the chain plates and bolts using a marine sealant. (The boatyard had quoted him €10,000 to do the job for him!) 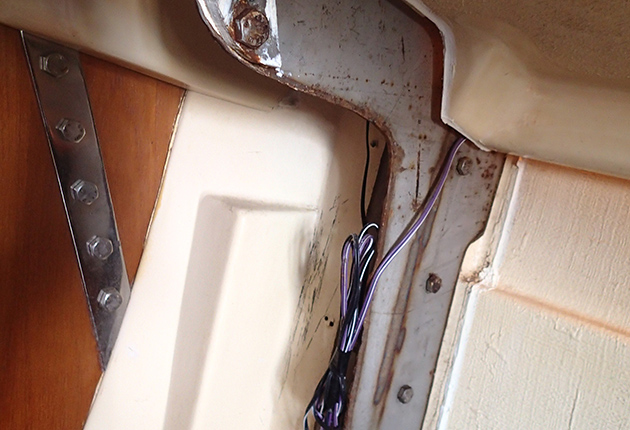 Chain plate knees. A small leak needed resealing, but when the bolts were retightened, one failed due to stress corrosion cracking. Credit: Vyv Cox

On my Sadler 34, the lower shroud chain plates are set inboard a little, bolted to an angled plate that is itself bolted to the hull, as shown above.

The whole arrangement is covered inside the boat by a GRP moulding and is thus not easily inspected.

It became apparent that there was a small amount of leakage on both port and starboard sides, necessitating re-bedding of the deck plate.

Removal of the deck plate was straightforward and, after checking that all the bolts holding the hull plate were tight, I applied generous amounts of sealant, replaced all nuts and bolts and tightened them.

My first shock occurred when one of the 10mm bolts between the two plate components fractured at relatively low torque. 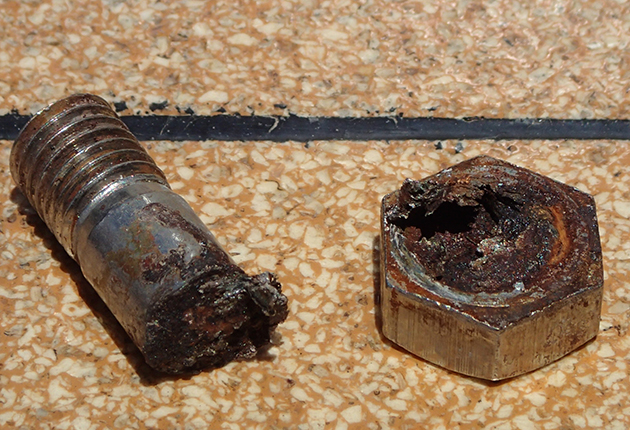 I replaced all three bolts and turned my attention to the port side.

All went well until I checked the tightness of the 6mm bolts holding the hull plate to the captive nuts inside the GRP.

Two heads sheared off, one each side of the 90° plate, making removal problematic.

My only option was to drill out one of them until there was sufficient clearance for the plate to be removed. 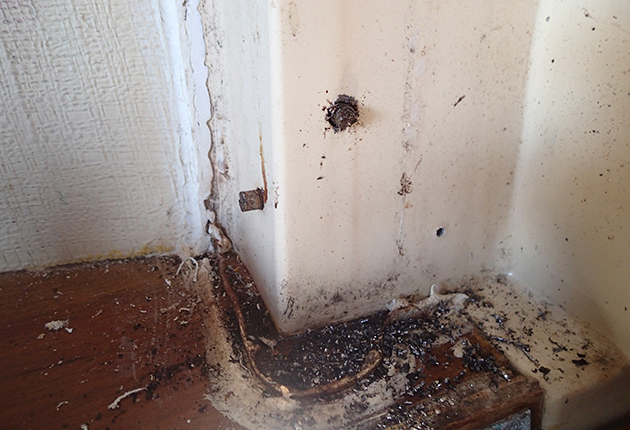 Corrosion debris: Drilling out the failed bolts was a messy job, revealing how much corroded metal there was. Credit: Vyv Cox

This was a long job in temperatures above 30°C – cue much swarf, sweat and cursing (see above).

The fractures revealed stress corrosion cracking but in this case the three 10mm bolts were in reasonable condition.

What to do about stress corrosion cracking

In all of these cases, severe corrosion has occurred in metal that should have been fully resistant to the relatively mild solution of chlorides that forms seawater.

In both cases of chain-plate failure, the amount of water involved was minute – in my boat, leakage was so small that no internal woodwork was even stained.

The need to eliminate even the smallest amount of leakage is very clear. 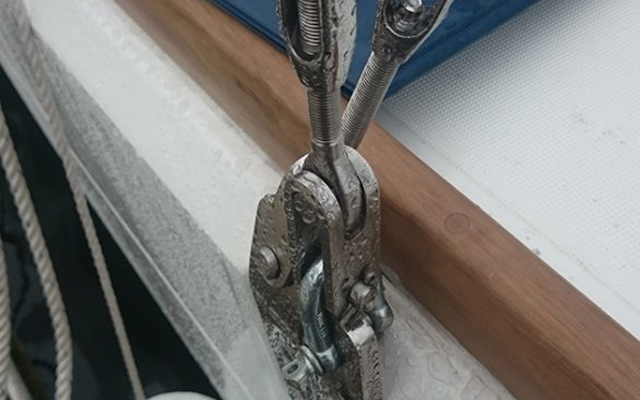 Send your questions to yachtingmonthly@futurenet.com for an expert answer. This month – can you do your own rigging checks?… 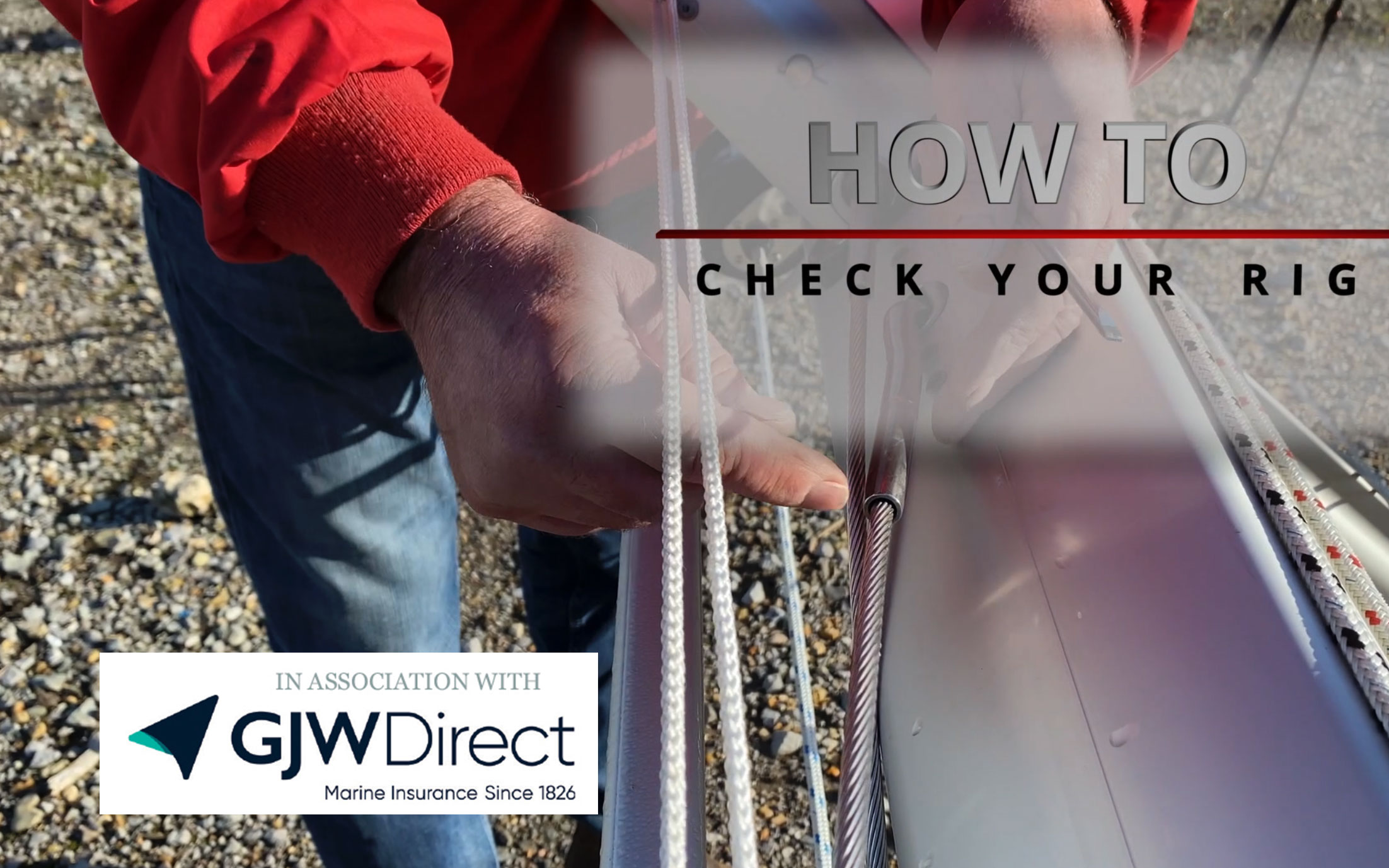 A screwdriver, a straight edge and a good set of eyes are all that’s required for a basic rig check.… 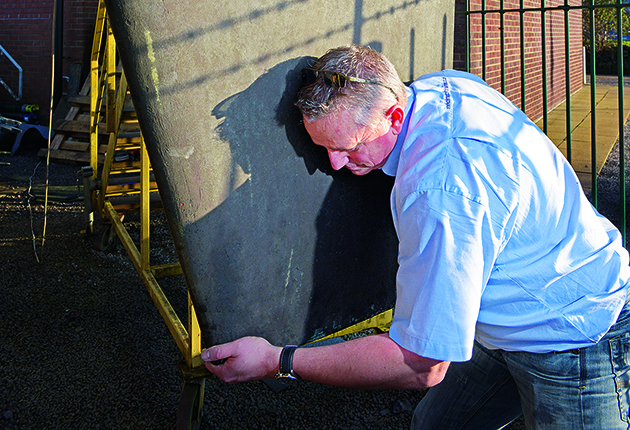 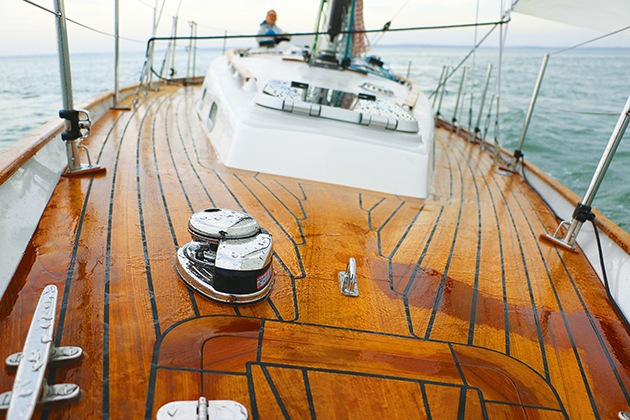 The owner needs to inspect and chase down any persistent little leaks inside the boat, particularly those that are associated with highly loaded components such as chain plates or any other rigging components.

It is also worth taking the opportunity to unstep your mast, unbolt and inspect your chain plates, bolts and other loaded rigging points over the winter, before rebedding them all carefully with marine sealant.

In the case of the swivel, the stress almost certainly was due to bending of the arms by bolt tension.

This design of swivel is poor for several reasons, susceptibility to stress corrosion cracking being only one of them.

As with all corrosion problems, total elimination of water is the full answer.

In several cases discussed here, this is impossible, but regular flushing with fresh water should help.

Webinar: how to manage your boat on a circumnavigation