Rebel Wilson has become such a symbol of health after her 60 pound weight loss that she’s now an ambassador for a vitamin company. We’ve got her new ad, where she rocks a lycra workout set.

On Jan. 6, Rebel Wilson teased fans about a new project while rocking hot pink lycra leggings and a bright orange crop top. Now she’s showing fans what the workout look was for, as the 40-year-old has become a brand ambassador for Olly gummy vitamins. Rebel appeared in the first commercial spots that debuted on Feb. 10, while announcing her new gig on her Instagram page.

“Excited to announce that I’m not just an @ollywellness fan… I’m now an OLLY ambassador!! Nothing but smiles when it comes to my OLLY partnership. It’s a match made in gummy heaven and OLLY fits my lifestyle perfectly so I can continue my health and wellness journey this year. All their gummies are packed with benefits that make it easy to take your vitamins and supplements. Lots of fun things ahead… OLLY, SET, GO,” she wrote in the caption next to a photo of her in mauve pajamas, holding the product. 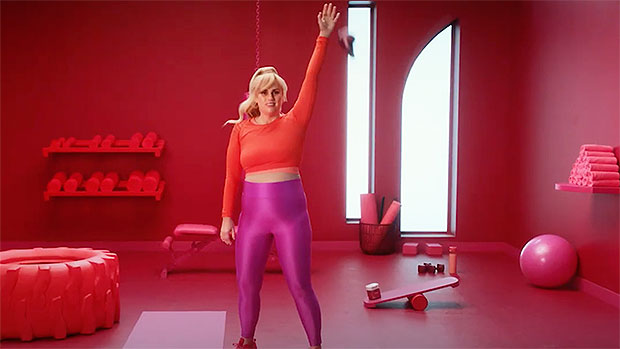 In the new commercial that dropped — which you can watch above — an alarm goes off as Rebel gets out of bed with tons of energy. She grabs a bottle of the product and says “Hey, wake up. Take your Olly gummies and dominate your day!” Rebs then walks into a bright pink room filled with workout equipment and is seen in the pink leggings and orange crop top. “Because when you take Olly gummies, nothing can stop you,” she says with a smile after tossing over a workout tire and lifting a kettlebell.

“I don’t even stop for mirrors ’cause I now I’m already gorgeous!” Rebel declares, as she looks stunning in a pink evening gown in another scene from the ad where she’s poses at a photo shoot. She ends the commercial heading back to bed after an amazing day, saying,  “A good night’s rest is the key to being unstoppable,” while putting a jar of their sleep aid vitamins next to her bed.

Rebel underwent such a fitness makeover in 2020 that she’s keeping the momentum going into the new year. She lost 60 pounds, and developed a daily workout routine. On Jan. 1, 2020, she declared it would be her “Year of Health” and the Pitch Perfect star totally made it happen through healthy eating and exercise. She’s still going strong into 2021.

Sadly one thing that didn’t successfully make it this far into 2021 was her romance with Anheuser-Busch scion Jacob Busch, 29. The two split up after a over year of dating, though she didn’t take their relationship public until a Sept. 24, 2020 gala in Monaco where she made Jacob red carpet official. They were last seen making out during a pre-Christmas trip to Aspen, in a romantic photo Rebel shared to her Instagram. But she let the world know they were over in Feb. 2 IG post where she was seen in a denim dress standing outside of a production trailer. In the caption she wrote, “Lots on my mind…aghhhhhh…#single-girl-heading-to-Super-Bowl!” Her rep confirmed to HollywoodLife.com that she and Jacob had broken up.