Round the Island Race 2021: The course in detail

The Round the Island Race 2021 might well be one of the first big events sailors can take part in this year. How do you get round the course safely among 1000s of other yachts? We take a look at the famous course.

There are few races that inspire such a wide range of sailors to compete. Indeed, there are few other sports or pastimes that allow everyday folk to compete against professionals and Olympic medalists on an equal footing. The Round the Island race 2021 does just this, regularly seeing 1000s of amateur sailors taking part in addition to Olympic sailors and offshore legends.

But over and above all that, the Round the Island Race is simply a cracking day out on the water. Few things can compare to the sight of 1000s of boats heading west down the Solent towards the Needles and that sight is particularly stunning from within the fleet.

For those of us less used to the cut and thrust of yacht racing, approaching the Needles surrounded by a sea of other boats, all with the same intention to turn left, avoid the Varvassi wreck and set off for St Catherine’s point might sound like a recipe for disaster.

Fear not, however. The RTIR might be a race (and trying to get the better of those boats around you is a major part of the fun) but, in truth, most are there for an enjoyable day out and understand the racing is not too serious.

Starting the Round the Island Race 2021

Before looking at the Round the Island Race 2021 course, the first tricky part of the race to be negotiated is the start.

Typically the startline runs from the Island Sailing club, sitting towards the eastern end of Cowes’ high street and runs out to an outer distance mark in the Solent itself. 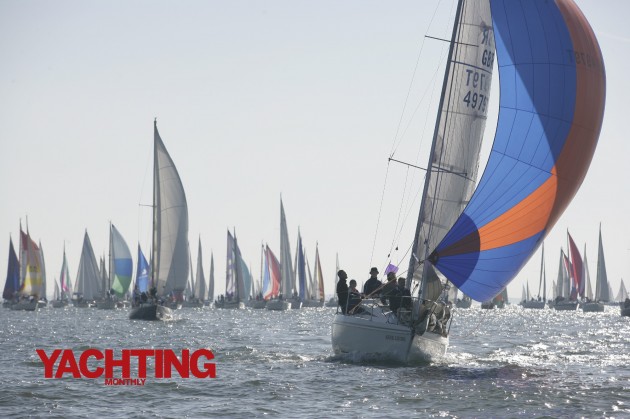 Although 1000s of craft take part in the racing each year, the fleet as a whole is split into classes with boats of similarly matched sailing speeds grouped together. As such the start is not quite as hectic as it might otherwise be, consisting of usually around 30 boats per start.

But that still represents a large number with which to share the same piece of water, so things can get a little spicy.

The absolute key to the Round the Island Race 2021 is keeping clear air. And happily for those not wanting to do dozens of tacks along shorelines, keeping clear air largely means staying clear of other traffic.

To this end try to start clear of the bulk of the fleet – who may well all be fighting tooth and nail for the favoured end of the line. 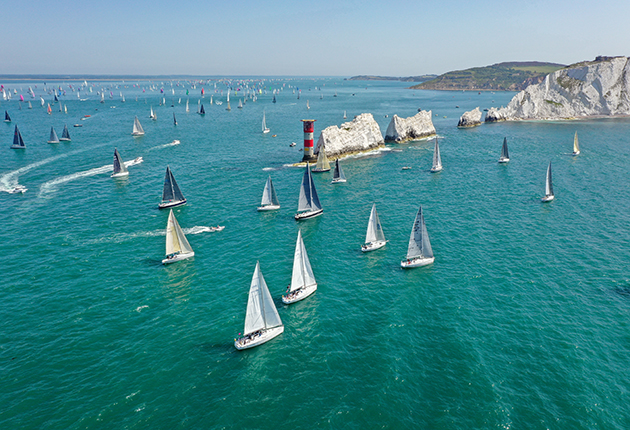 Entries have now opened for the Round the Island Race 2021, which this year celebrates its 90th anniversary 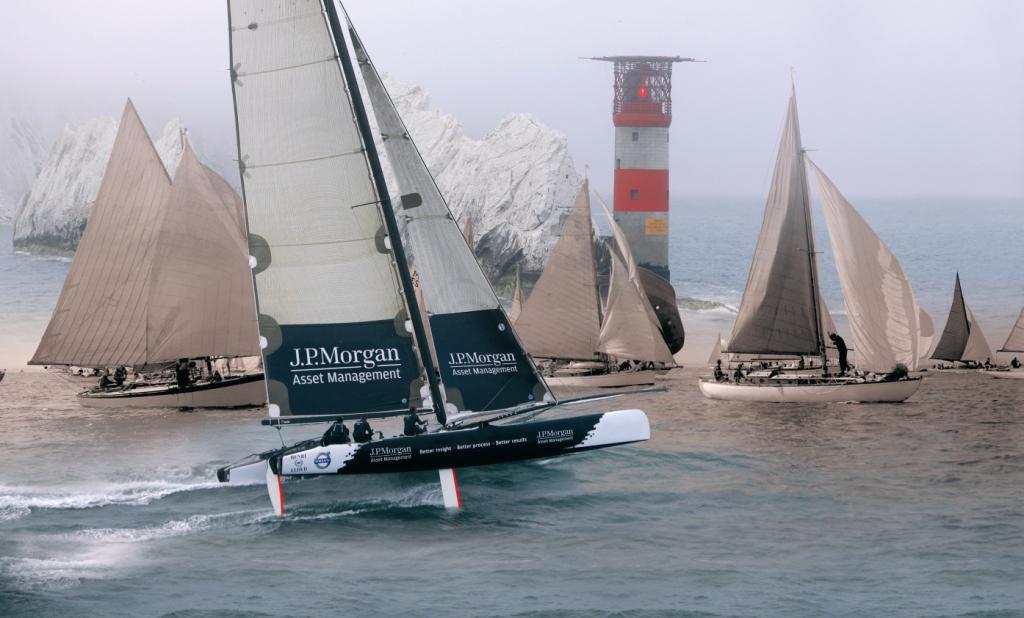 2011 is the 80th anniversary of the classic race

If you manage to find a decent lane of clear air, you should do everything you can to maintain it. This often means, even if you have right of way over another boat, it is usually worth bearing off to go behind them when crossing upwind – and this is true downwind too.

If you are beating off the startline, try to have someone to leeward on the headsail sheet for the early part of the race so you can easily ease sheets and duck behind others. Make your intentions clear from a long way out from any crossing and let other boats know of your intentions.

The same applies downwind too, ignore tide, ignore right of way, ignore all other considerations, just try to keep some clear air over and above all else.

Although clear air is your key consideration, particularly in the early part of the race, there are some good rules of thumb to follow. Early on the tide should be under you, so try to stay in the deep water channel where possible.

In very light, northerly winds it can pay to take the north shore, but as this is such a rarity, it is best to discount this option and stick to the channel and the Island north shore.

This is probably the most famous – and typically most feared – part of the race. It’s almost cliche to mention it, but don’t tangle with the Varvassi wreck near the Needles themselves, however inviting cutting the corner might seem. The four separate hunks of the wreck are difficult to place, so unless you really know what you are doing, keep clear. 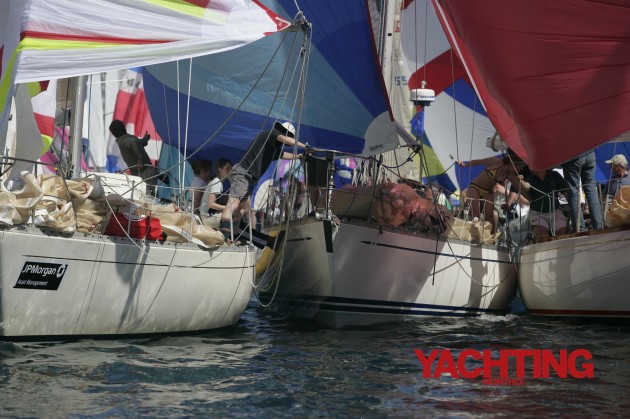 Most will know to avoid the wreck, but a common error is to give too much space. If you overstand the Needles, you’ll often end up swept west by the tide, and the problem is exacerbated by the clump of boats rafted up trying to squeeze round the inside route, creating a windshadow beyond the Needles themselves.

Be cautious, but try to avoid falling into the trap of giving too much space and sailing far, far further than you need to. This is a natural compression point for the fleet, so often you can find yourself closing in on a number of boats who are going slowly. Remember you can ease your sails to slow down as you look for a suitable gap, and this can be preferable to trying to take the outside route.

South-west side and St Catherine’s point

Rock ledges are the main feature of this part of the course, and from Hanover Point to Atherfield Ledge they extend a good distance out into the channel from the island. It often pays to take an inshore route, but an echo sounder won’t help you in the approach to some significant ledges, such as Hardman Rock or Atherfield Ledge with their steep sides making for very sudden changes in depth. 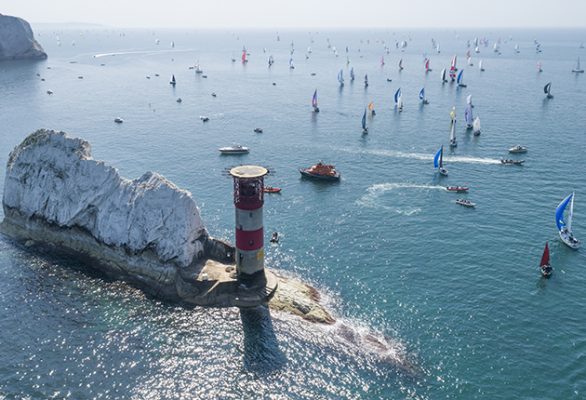 The coast is rock-bound from Rocken End via St Catherine’s Point to Dunnose Point and there are many offliers. Try to find a route that keeps your wind clear, minimises any adverse tide and gives a sensible margin over unexpected rocks. Watch out for serious overfalls in strong winds.

In light airs, the wind can become quite complex as you cross Sandown Bay. Many people are tempted to sail close to the shore as there is less tide, but often there is better breeze out in the stronger tide offshore, so consider this option in light wind races.

If you did choose to go close into Sandown Bay, you’ll want to head out into the channel fairly early as it very rarely pays to go close to Bembridge Ledge itself – though try not to overstand the buoy, which is a mark of the course. Once round the buoy, focus again on finding clear air, as this can often be a challenge at this pinch point where the fleet converges again.

You can stay out of the tide by sailing into the shallows of Ryde Sands and there is often a good benefit to be found by doing so, but you want to be mindful that you don’t run aground, for ease of mind try to keep a boat of a similar size inside your line in the hope they will give you early warning should grounding be likely. Once past Sandshead Post, the bottom shelves steeply – so keep an especially wary eye on the echosounder here, and consider heading out into the tide a little early, even if this means giving up some speed. 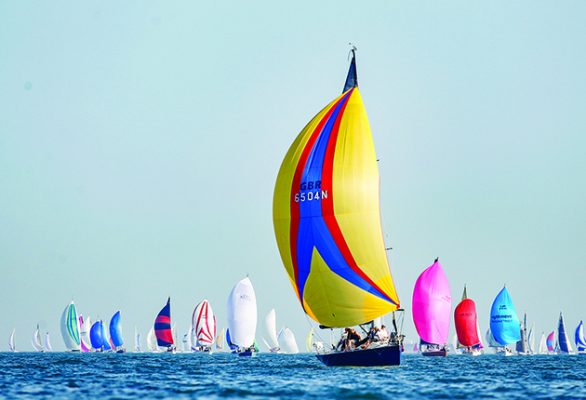 Generally, it pays to go in close at Castle Point, but if there’s a lot of south in the wind, there’ll be no wind under the point at all. Again it is easy to get sucked into the windless spot before you realise it and the slow sail out is a frustrating experience. Much better to give the bay plenty of room.

In South Westerly winds, you may well find that the breeze increases significantly after Castle Point as the funnelling effect along the Solent comes into force.

There is a temptation to relax once Cowes is once again within sight but you still have a fair bit of sailing to do. And this last section can take longer than you think. Try to manage your crew’s expectations as people will be tired by this time and ready for that post-race beer. Alert crews can gain many places in the last two or three tacks simply by keeping their wits about them and there is nothing more thrilling than stealing a few places at the finish.

And then enjoy that beer or G&T and reflect on a fun day out for all.

The Round the Island Race 2021 is due to take place slightly later than usual on 3 July. See the website for more information.

How to Choose the Perfect CrossFit Gear and Clothing

Important Details to Greatly Consider Before Getting a Used Vehicle

Cruising in Europe: How to cope with Covid and Brexit issues