The 2020 Latin Grammys opened with a splashy, star-studded homage to the salsa legend Héctor Lavoe. While a group of music luminaries, including the singer Victor Manuelle, belted out the lyrics to “El Cantante,” the 28-year-old Puerto Rican artist Rauw Alejandro sauntered onstage holding hands with reggaeton matriarch Ivy Queen. Wearing his signature braids and a burgundy suit adorned with gleaming chains, the smooth newcomer seemed to announce that although he’s known for R&B and reggaeton, he could easily glide in next to seasoned veterans and perform salsa. Throughout the whole night, in fact, he felt a little like the ceremony’s golden boy: In addition to the Lavoe tribute, he was nominated for Best New Artist and he did a medley of his own hits during a pre-show special. It all added up to more proof that he’s one of the world’s most charming and versatile emerging stars.

The morning after the Latin Grammys, Rauw Alejandro — whose real name is Raúl Alejandro Ocasio Ruiz — was still reeling from the excitement. “To be picked for all of that was an honor, and truthfully, I’ve just been really happy celebrating,” he says, calling from Miami. “I’m still a little out of it because we went back and celebrated here at home.” The Best New Artist award ended up going to the Colombian crooner Mike Bahía, but Ruiz “felt blessed” to be recognized. Plus, even sharing the stage with Ivy Queen, a woman he calls “a role model,” “a GOAT,” and “a reggaeton pioneer,” marked a huge moment for him. “She elevated women so much in a machista society, and that’s what we need, that equality,” he says. “She’s put so much respect into female power in urban music. She’s the queen — the name tells you everything.”

The whole past year was somewhat of a whirlwind for Ruiz. He began 2020 in Carolina, the Puerto Rican municipality next to San Juan where he grew up and still lives. A homecoming concert he’d planned at the historic Coliseo de Puerto Rico was canceled because of the pandemic, so he ended up recording an audience-free show, which he released as a live album called Concierto Virtual en Tiempos de COVID-19 Desde el Coliseo de Puerto Rico in May. Then he rented a house in Miami and hunkered down to finish his first studio-length album, Afrodisíaco. The record, which features collaborations with J Balvin, Rosalia, Sech, and Camilo, did well on the charts when it arrived in November, and helped add to his 3 billion-plus views on YouTube. 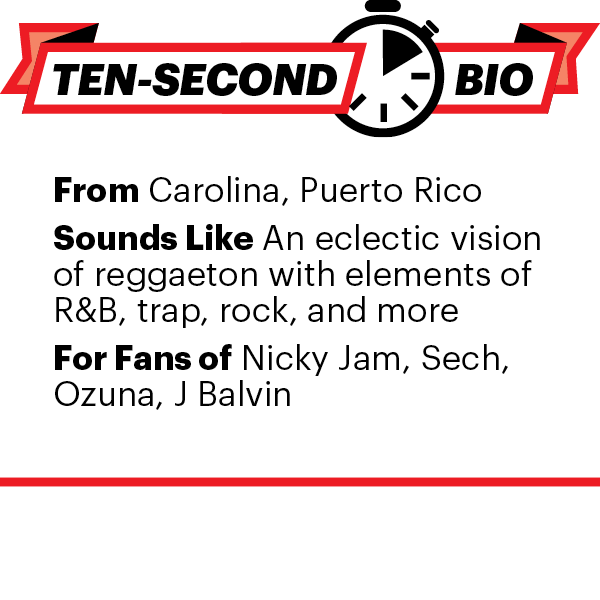 Now, Ruiz is ready to make more moves. Growing up, he had dreams of being a soccer player; he even made a bid to play on a semi-pro league in the U.S. before an injury cut his career short and he pivoted to music. Some of his early work made it seem as though he would be at the forefront of an R&B wave in Spanish-language music, with lighter, melody-driven songs like 2018’s “Luz Apaga” and 2019’s “Fantasias” drawing on his love of performers like Usher and Michael Jackson. But he also played with trap, an early indicator of the eclecticism he wanted to indulge, and his recent songs have continued to spotlight reggaeton.

“I couldn’t not do reggaeton,” he says. “It’s in my culture. It’s in my blood, and when I released those first reggaeton tracks, people went crazy.”

Afrodisíaco centers reggaeton, but it has an experimental side, too. “Química,” for example, starts out with a dancehall-tinged beat before it shifts and breaks into a house track. On the dark reggaeton opener “Dile A El,” his goal was contrasts. “I wanted [the song] to have an outro that was completely the opposite — more angelic and lighter,” he says. “I had a chance to work with Rosalia, who came in and did her thing and went into the production side. In the end, it was such a great team and a great song.”

Ruiz prefers home studios where he can hole up for days and come up with ideas. That’s mostly how he spent the last few months of 2020, apart from hanging out with his Schnauzer, Taro, watching anime, and occasionally jet-skiing with his friends. The better part of his hours are spent on music, and he already has some track ideas lined up for 2021. “I have rock mixed with hip-hop, drum ‘n’ bass, electronic music, even music that’s a bit more classic because I’m a huge fan of boleros, thanks to my dad,” he says. Both of his parents were singers, and his grandparents were musicians who performed traditional Puerto Rican jibaro music, a style that Ruiz says he’d love to explore someday. “Fusing modern styles with past roots is something that to me is really beautiful and innovative,” he adds.

He’d also like to collaborate with English-speaking artists like Cardi B, Post Malone, and Bruno Mars. But the most important thing is to keep the momentum he has going. He can feel the gears shifting now: His music is resonating, and his fan base has only grown more enthusiastic as a new year inches closer. “We’re in a different position, where people know my music more, we have a few more hits on the list, we have more songs, and people are really excited,” he says. “The first party I get called for, the first concert or festival I book, I’ll be there, wherever it is.”