Pip Hare has achieved a lifelong dream by finishing the Vendée Globe, the first British skipper in the 2020 race

Pip Hare crossed the finish line of the Vendée Globe at 0057 this morning to become the first British skipper to finish the 2020/21 race.

When the gun went, she jumped for joy. The grainy footage of a small red-clad figure leaping on the deck of her silver and purple IMOCA was undeniably emotional, this was watching someone’s lifetime dream come true. To complete the Vendée Globe was an ambition that Pip had poured her very heart and soul into, and hers was a moment of pure celebration. 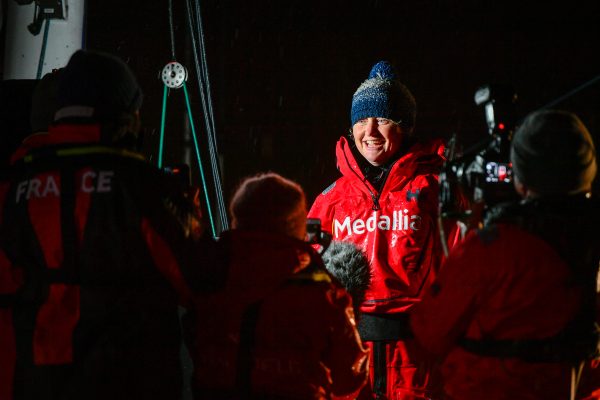 Pip Hare finished the Vendée Globe on Medallia in 19th position, with a final time of 95d 11hr. Sailing the second-oldest boat in the fleet, the 21-year-old former Superbigou built by Bernard Stamm, she finished within a few hours of the two closest foilers ahead (Alan Roura’s La Fabrique in 17th, and Stéphane le Diraison on Time for Oceans).

She is only the 8th ever female skipper to complete the Vendée Globe (four of which have been English). Before setting out, Hare had hoped to beat Ellen MacArthur’s record for a female skipper of 94 days. She just missed out on that (Clarisse Cremer has set a new female record this year in 12th place at 87 days); it doesn’t matter. This race has been a slower one than expected for almost every competitor, but everyone who has followed Pip’s race will know that she has sailed Medallia’s socks off.

Three weeks into the race, as she passed the coast of Brazil, she was surrounded by a pack that included several foiling designs. In her first ever race through the Southern Ocean, she hugged the ice limits to sail a fast direct line, and was in 17th place passing Cape Leeuwin, and a seriously impressive 15th passing Point Nemo. 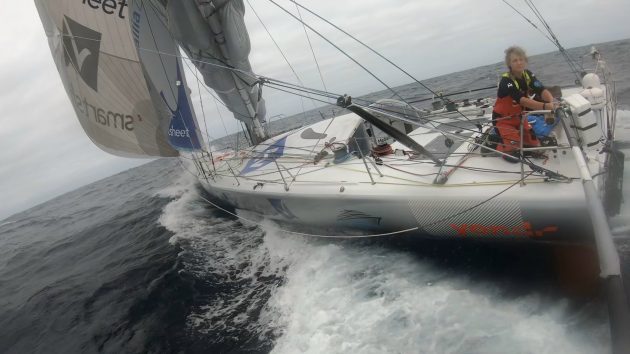 Onboard, however, her Vendée Globe was getting tougher and tougher. Medallia was well known to be one of the hardest boats in the fleet to sail, with mast base halyards, a block and tackle (rather than hydraulic ram) keel canting system, and negligible cockpit protection compared to the modern designs. At the end of November, Medallia lost one of its hydrogenerators, meaning Pip Hare had to save her diesel reserves for power generation, leaving her with no heating in the south.

More critically, on 2 January her wind sensor broke down, leaving Hare with no reliable wind information. Her only option was to set her autopilot to compass mode, sleeping with one hand on the pilot remote control at all times in case of sudden wind shifts.

Besides the exhaustion, the real stress for Pip was her inability to sail at Medallia’s maximum potential. “We are going slowly but safely,” she wrote on January 3 after attempting a wind unit repair. “I have never sailed Medallia like this. It feels so wrong, it’s not relaxing at all and I am miserable at the thought of all of those miles that I am losing against everyone on the course. I know this is the right decision for this moment but it hurts like hell.” 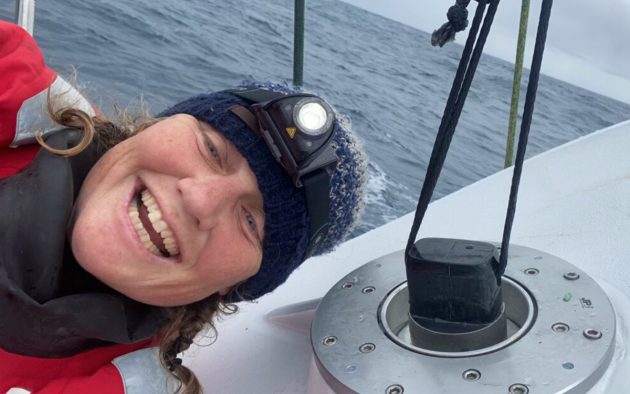 Then it seemed that disaster had struck mid-Pacific, when the port rudder stock cracked. It looked, briefly, as if Pip’s competitive race would be over. She was, she admitted, devastated. However, in a typical can-do attitude, Pip managed to remove and replace the rudder, and resumed racing having lost just two places.

The niggles continued, with Hare unable to set her fractional gennaker and suffering keel issues on the final approach. Nonetheless, Hare continued to push hard to the very line, reeling in over 100 miles from Le Diraison as she reached into Les Sables.

By sailing Medallia far beyond anyone’s expectations, Pip Hare has proven herself to be a serious competitor. She won praise from many skippers across the fleet for her smart decisions and impressive performance. Jean Le Cam was among the first to greet her into Les Sables, wrapping in her an enormous bear hug (it’s hard to to think of a more demonstrative sign that a British ‘rookie’ has fully earned their place in the IMOCA fold!). 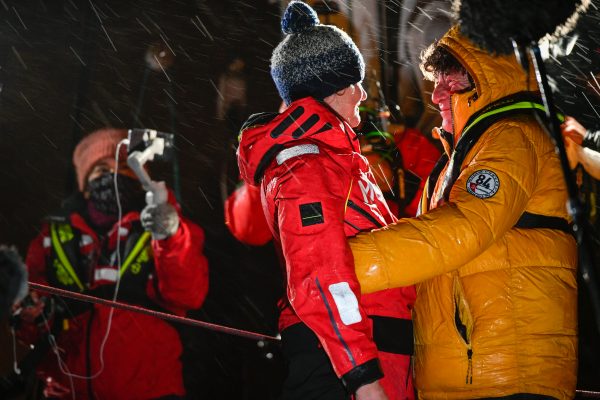 However, equally impressive has been Pip’s ability to share her experiences. She’s written for Yachting World for years, and we know her to be modest, incredibly knowledgeable, and an excellent communicator. But her upbeat videos, honest blogs and the genuine enthusiasm she has for the whole experience shone through in every interview or social media post she made, winning her legions of fans far beyond the sailing world.

For her 47th birthday, her local radio station BBC Solent managed to persuade movie mega-star Russell Crowe to send her a birthday message mid-Atlantic, after it was revealed that she was a huge fan of Master & Commander. Sailing legends joined in, with everyone from Sir Ben Ainslie to Dame Ellen MacArthur adding to the birthday greetings.

Pip Hare celebrates with Champagne after arriving back on the dock at Les Sables d’Olonne. Photo Richard Langdon / Ocean Images

Her sponsors Medallia, an American software company which signed up to support Pip in the final stages of her preparation, seem understandably delighted with their return on investment. CEO Leslie Stretch spoke to Pip mid-race on the race’s live video show, saying: “What’s next Pip? Let’s get to the end and then let’s go shopping for a new boat, shall we? Lets do that! What do you think about the next round?”

“This race – and solo sailing – forces me to be the best version of myself,” Pip has said. This Vendée Globe has tested her hard, but has revealed the very best of her and the sport to legions of followers. She deserves to enjoy every moment of her phenomenal achievement.

Where Can I Borrow Money with Low-Interest Rates?

Prep for the Holidays with Couture – Couture USA

4 Essential Things To Do For Your Personal Security