No one, probably not even ‘Blondie’, could have guessed that ‘Hasler’s wonderful idea’, conceived in 1956, would still be going strong in 2022 – over 60 years after the first Observer Single-Handed Trans-Atlantic Race (OSTAR) first took place.

During the intervening years the OSTAR has been through a number of iterations and titles and a few ups and downs, yet it continues to flourish.

A special 60th anniversary edition of the OSTAR has been on the cards for a long time now, though as with many other sporting events across the world in recent years it has been postponed on several occasions due to Covid 19 first in 2020 then again in 2021.

Rear Commodore Oceanic and Race Director, Adrian Gray, explained when the even needed to be postponed again late in the day in 2021 that: “Covid-19 rules for entering both the UK and USA have led to a last-minute reduction of entries due to them being unable to comply with these measures. This in turn has made the running of OSTAR and TWOSTAR physically and financially unviable for 2021. Therefore, we have no alternative but to postpone the running of the 60th anniversary race again, now to a new date of May 15th, 2022.” 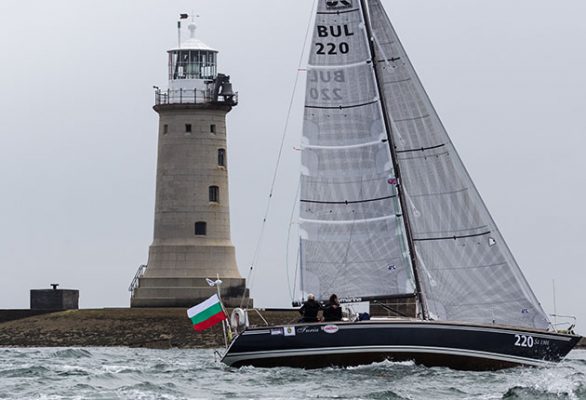 The OSTAR starts from Plymouth and ends at Newport. Credit: Paul Gibbins

But not all those set to enter were deterred and following the postponement, a small group of determined solo and double-handed skippers set off on their own challenge, the NOSTAR transatlantic.

At the time of writing 15 sailors were signed up for this year’s OSTAR. You can keep track of entries via the Royal Western Yacht Club’s website.

The course is from a start line in Plymouth Sound to the finish line in Narragansett Sound, Newport Rhode Island. True to the history of the event there are very few limitations in terms of the OSTAR course, with the only instructions to racers stating that they must ‘leave Plymouth Breakwater to port, Eddystone Lighthouse and outlaying rocks and Nantucket Island to starboard.’

The history of the OSTAR

In 1951 Blondie Hasler developed an ‘intensifying’ desire to design a ‘radical cruising boat’ that would, in his own words, ‘be my servant and not my master’.

Eventually the junk-rigged Jester – ‘because she is such a bloody joke’ – with her self-steering gear and central, enclosed steering position to which all lines led and from which the skipper need not move, was built to ride out a storm, if not in comfort then at least in safety.

A serious consideration was that she would need to keep a girlfriend keen in the early, impressionable stages of a romance, by not having to fight sodden canvas at 40° angle of heel in seven-eights of a gale.

In September 1957 the second of Hasler’s ‘inventions’ that was to change the face of short-handed ocean sailing was also taking shape.

The trim tab fitted to the trailing edge of rudders was not new but he had to start somewhere in his quest to transfer power from the water-flow to the tiller, and so the Hasler pendulum-servo vane gear was born.

To understand the gestation of the event that transformed many of the world’s offshore racing calendars, it is necessary to return to 25 November 1956, when an article in The Observer, describing how two retired Royal Navy officers had recently crossed the Atlantic single-handed, caught Hasler’s eye. 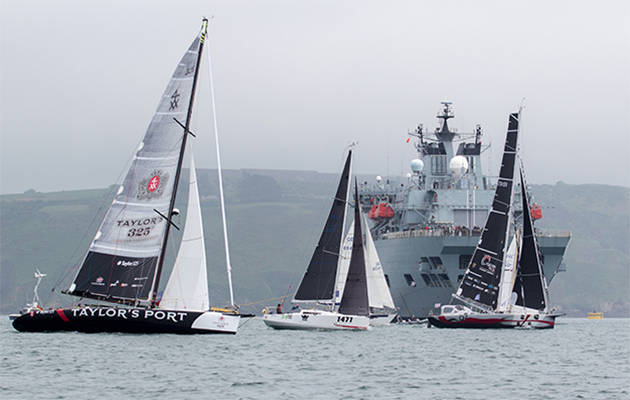 The seamanship of the 2017 OSTAR skippers was certainly tested when an Atlantic storm saw the loss of two yachts from the singlehanded fleet, although the skippers – Mervyn Wheatley and Michelle Zambelli – were successfully rescued. Credit: Paul Gibbons

Hasler knew that there had been a single-handed transatlantic race in 1891, albeit from west to east, but these latest crossings sparked an idea.

So, on 11 January 1957, anxious to prove and advertise his two ‘inventions’ in a contest, Hasler wrote to his friend, David Astor of The Observer: ‘I have been brooding for some time on… organising a transatlantic race for single-handed sailing boats… Is there any hope that The Observer would like to sponsor it?’

Astor’s reply was not encouraging; ‘I rather think that my Managing Director will be against it,’ he wrote back.

Undaunted Hasler turned to New York’s Slocum Society: ‘By all means send us the proposed organisation of the race… the prospect is most exciting,’ was the reply.

Thus began an exchange of conflicting ideas. For instance, the use of radio transmitters would be allowed, the race would stage via the Azores and engines were, in Hasler’s words, almost mandatory.

Referring to radios, he commented: ‘I would be happy to drown with dignity for I dread the idea of ships having to conduct rescue operations.’

Meanwhile a new team was gathering in The Observer led by its sports editor, Christopher Brasher, who held the same opinion as Hasler concerning nautical nannies.

With Brasher’s persuasion the managing director now agreed to ‘help’ but, anxious not to have its name associated with the race for fear of ridicule, he decided to call it the Atlantic single-handed yacht race.

Later, following the early successes, he agreed to ‘sponsor’ it while changing its name to the Observer Single-handed Transatlantic Race, or OSTAR. The paper’s involvement would last until 1986.

David Lewis and Val Howells, having heard of Hasler’s ‘amazing idea’, expressed firm intentions so, without yet a backer, the three determined to start themselves and take their own finishing times.

Who, they argued, needed a sponsor or yacht club? The myth of them each putting a half crown into a ‘purse’ is just that – a myth generated, post facto, by Francis Chichester. 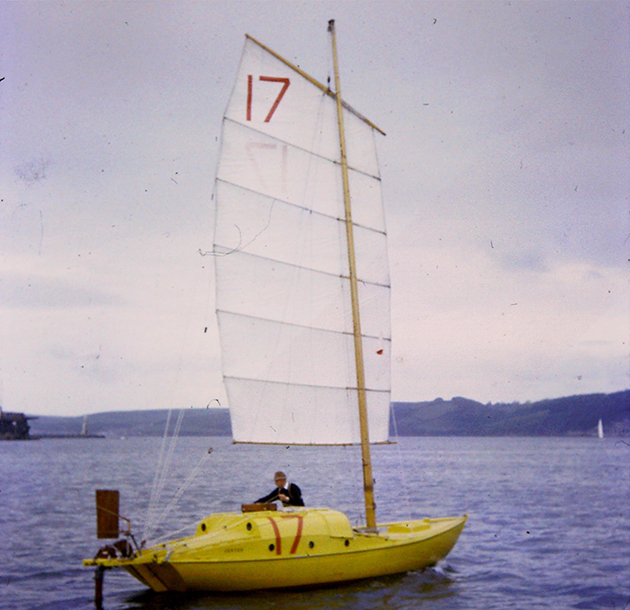 Eventually Chichester, too, declared an interest and, fortuitously, took on much of the correspondence from his London office. Finally, Jean Lacombe made up the fifth of the original starters.

Further good news came with the Royal Western Yacht Club’s agreement to handle the start under the leadership of their Rear-Commodore, Jack Odling-Smee, who, too, shared a similar outlook on life and the nannies of the cotton wool society that try to dominate it.

Having graciously stood down, the Slocum Society offered to oversee arrangements at New York.

The first four started from Plymouth on 11 June 1960 with Lacombe following three days later. All five yachts, four of whom were 25ft or under, reached New York in good order: a 100% record that still stands.

Just as interesting is that among the 15 starters in the 1964 OSTAR all five ‘originals’ again finished – this time at Newport, Rhode Island. Hasler was to predict that a higher percentage of under 30-footers would always finish, compared to a similar percentage of larger vessels.

Although multihulls had been accepted by Hasler for the first race none took part but during the second OSTAR multi-hulls successfully completed the course: two catamarans and one trimaran.

With success now proven, the OSTAR began to attract big money, big names and, inevitably, big egos. Indeed, so popular was it that by 1968 Hasler worried that the race’s success contained the seeds of its own death with excessive competitiveness being one of the reasons.

By the ’70s it was also feared that the French, upset at the fluctuating length and number of restrictions, would take over the OSTAR. They didn’t but instead introduced their own Route de Rhum in 1978. 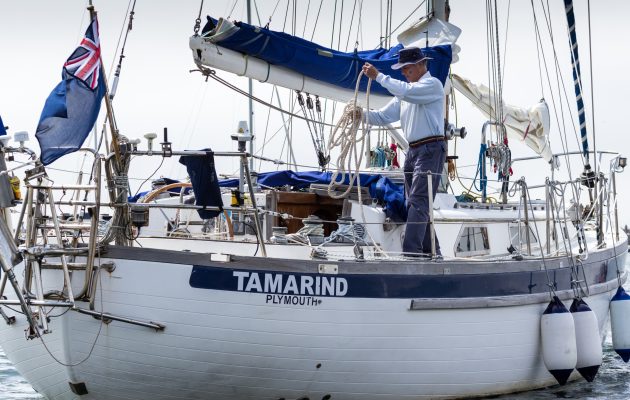 Mervyn Wheatley preparing his Formosa 42, Tamarind ahead of the start of the 2017 OSTAR. He was forced to abandon the yacht after it was rolled in a 70-knot storm. He was rescued by the Queen Mary 2 luxury liner. Credit: Paul Gibbons

There is no doubt that following Eric Tabarly’s popular win in 1964 (no one was more pleased than Hasler) France had found a new ‘national sport’ and, hence, new heroes. With this French interest came a proliferation of single handed trans-oceanic contests that continue to this day.

The OSTAR also gave Chichester the impetus to circumnavigate the globe in 1966 and that, too, led to yet more ‘global’ races.

The Royal Western Yacht Club (RWYC), equally concerned that the OSTAR was unmanageable, swamped by professional organisations, wisely hived off this element to Offshore Challenges in 2005, which is now The Transat.

It then reverted to running a Corinthian event with an upper size limit at 60ft and a lower limit of 27ft. This was primarily because of evolving international stability requirements, which made compliance for smaller vessels difficult.

Thus perfectly seaworthy yachts became excluded from a race that has at its very heart the 25ft Jester herself.

Perhaps, though, owners of these vessels are not so troubled at being forced out, when they know that £2,000, which increases with boat size, is required just to enter: over double what Jester cost!

This nautical-nannying (emphatically not of the Royal Western Yacht Club’s making) is a nonsense and surprises skippers of, for example, Twisters, Contessa 26s and even the diminutive Corribbee 21s who were, quite suddenly, disenfranchised.

Experienced yachtsman know that safety at sea is a complicated matrix of human and physical facts rather than just size.

The only arbiter of safety at sea is the sea itself, wrote Hasler, and ‘not a health and safety-orientated committee of nannies with slide-rules and copious regulations’.

Although the familiar – iconic – acronym, OSTAR, remains the same the full, RWYC title has been subtly altered by replacing Observer with Original.

Nevertheless, the ‘new’ OSTAR enjoys well-deserved and continued success and for that Hasler would, surely, be relieved.

But – a significant ‘but’ – he would not have approved of the word ‘original’ to describe ‘his’ trans-Atlantic race that bars four out of the five ‘originals’ from taking part.

Happily, the half crown club also flourishes– despite having been founded on a Chichester-generated myth!

7 top tips for a first-time visitor to Barcelona