‘Mood’ Hitmaker 24kGoldn Is an Artist You Need to Know

The Zoom interview has just begun when 24kGoldn, more or less unprompted, calls himself “the Steve Jobs of the music industry right now.” It’s the kind of braggadocious claim that only a 20-year-old with one of the biggest songs of the past year can say without a hint of irony. But the fast-rising, genre-blending rapper has good reason to feel so confident.

Goldn, whose real name is Golden Landis Von Jones, is the most successful artist to develop a musical career on TikTok since Lil Nas X, and one of the few to have made viral hits from the app more than once. He wasn’t discovered on TikTok, he notes — his label, RECORDS, signed him in 2019 — but it’s been his de facto platform. He’s released three RIAA-certified singles that shot to fame there, including his chart-topping hit “Mood” featuring Iann Dior, which became one of the biggest hits of 2020, spending the past 28 weeks on Rolling Stone’s 100 Songs Chart, hitting Number One in two non-consecutive weeks.

“I’m revolutionizing this shit,” Goldn matter-of-factly says of the record business. He casually shoots off more of his potential musical milestones throughout the interview as if he’s already seen them happen: He knows he’ll have more Number One singles, he knows he’ll run his own record label one day. The only thing he isn’t entirely sure of is what day it is when we talk. He says he’s been so consumed with his musical career that those have all blurred at this point. (It was Friday, I’d told him.)

After going viral, “Mood” received treatment befitting a major tune. It hit the top of radio charts, and superstars Justin Bieber and J Balvin jumped on a remix for the song in November. Goldn says the song’s happier tone was key to its success. In a year defined by a pandemic, an uprising against racism, and a divisive presidential election, many artists looking to connect with listeners seemed to lean into the state of the world when recording new music — or they avoided it altogether. Goldn took the latter approach to “Mood,” with its bright, beachy, guitar-laced beat and carefree melody.

“When we made the song, we were having a genuinely good time, and the essence of that was captured in the song,” he says. “Whenever anyone else listens to it, they can be in their house alone, but by listening to the song, they feel the same fun we had making it. The contrast between the way the world was feeling and the way the song feels was so big and beautiful that it uplifted people.”

The notoriety that can come with a Number One single so early in a career doesn’t seem to faze Goldn, who says he’s used to turning heads. “My parents named me Golden, and I had a huge afro for the first 12 years of my life,” he says. “So I kind of always stood out. I owned my swag.” 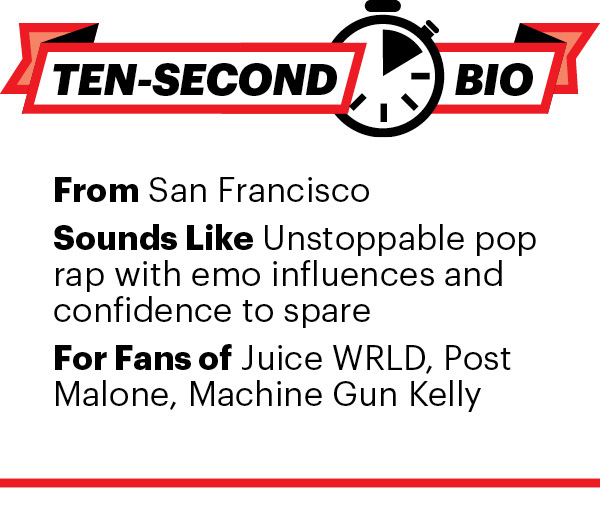 Music has always been Goldn’s main plan, but he had a steady backup, too. He spent a year at the University of Southern California studying business on a full-ride scholarship, and if his music career hadn’t taken off he wanted to become a hedge fund manager or some sort of entrepreneur. He’s remained involved in the more granular aspects of the business decisions in his career, which he says will train him in his aspirations to run his own label.

“I need to know these things so I can be that wealth of resource, that wealth of knowledge that my team has been for me,” Goldn says. “I know how inefficient other labels can be, too. [RECORDS] gave me the freedom and the access to do what I needed to make shit happen. Other labels and other artists don’t. They’re kind of just floundering around trying to get a hit. I feel like coming from that artist’s perspective and and still having that business mindset, I’m going to be able to do it better than anyone else.”

24kGoldn is ubiquitous within the TikTok rap scene, but he’s not into that pigeonholed distinction for his sound. Even broader genre labels feel reductive: He does plenty of rapping, but “Valentino” and “City of Angels,” his first two hits, feature emo-inspired vocals, and “Mood” is closer to song-of-the-summer pop.

“When I was in high school, everyone called me a SoundCloud rapper, now I’m a TikTok rapper,” he says with a light chuckle. “I don’t blame the people who say that. It’s easier for people to put you in a box than accept the whole of your being. With time, people will realize I’m here to stay and that I’m a true artist, not a fad.”

His parents heavily influenced what he listened to as a kid, introducing him to mainstream hip-hop and pop artists of the 2000s like Kanye West and the Black Eyed Peas alongside jazz acts like Miles Davis. He delved heavier into rap in middle and high school, naming Pusha T, Young Thug, Chief Keef, and Rick Ross as influences. By the end of high school and early college, he found rock and alternative.

In an era where rappers like Machine Gun Kelly are willing to make complete pop-punk albums while others like the late Juice WRLD were crooning emo lyrics over trap beats and Post Malone performs a concert of Nirvana covers, Goldn embraces going in different directions.

“You can’t box me in, and I’ve proven that again and again. I learned in my life usually the world has to catch up to me, not the other way around,” he adds. “Yeah, I’m a rapper, but I’m also a rock star, an R&B singer, and whatever the fuck else I want to be that day. I don’t box myself in. I’m just Goldn.”

Willie Nelson to Write ‘Letters to America’ in New Book

Days of Change: Looking Back At Acts Who Made A Difference