There’s no question: the final Prada Cup Round Robin race between INEOS Team UK and Luna Rossa Prada Pirelli was any absolute humdinger. With nine lead changes, this scorcher of a three-lap battle demonstrated many of the critical features of match racing in the foiling AC75s.

Who better than British match racing supremo Ian Williams to explain the tactics behind the manoeuvres? “This was a very interesting race due to the fact that Luna Rossa had an apparent boat speed superiority, but INEOS Team UK appeared more confident in their manoeuvres,” explains Williams.

“Normally in match racing you’d always take the boat speed advantage, but the boundaries [on an America’s Cup course] mean it is easy to get forced out of phase with the wind shifts. “When that happens, you have to do an extra manoeuvre to get back in phase – but it is very tricky to know when to do that, particularly if there is the risk of a big loss in that manoeuvre.” 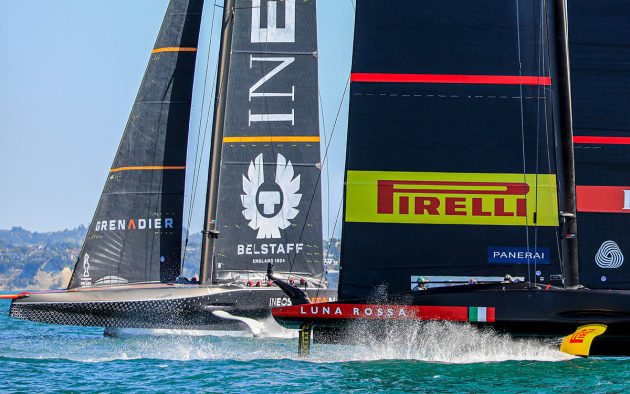 Here, Ian analyses some of the key manoeuvres that the AC75 crews have had to master on the 50-knot foiling machines…

At the start, the key goal for the leeward boat is to be nice and tight to leeward of the boat to windward.

In this race I think the start was a clear win for Luna Rossa. They came back very early for the line and you could hear both Ben [Ainslie] and Giles [Scott] confirm that they thought Luna Rossa were too early.

INEOS tacked in a nice spot to windward, but then had a choice to make. One option was to push hard with a view to either ‘hooking’ the other boat (and forcing them either head to wind or into a tack), or push them to be early for the line. The other was a ‘soft push’ where you feign the hook but actually your goal is to maintain separation. INEOS pushed hard but neither got the hook nor forced Luna Rossa early for the line, and thus gave up all their separation.

The next critical incident was when the two boats were lined up after they’d both tacked twice. They were close together on starboard tack with Luna Rossa to leeward. Ben Ainslie was steering from the leeward side so he could get a good view. 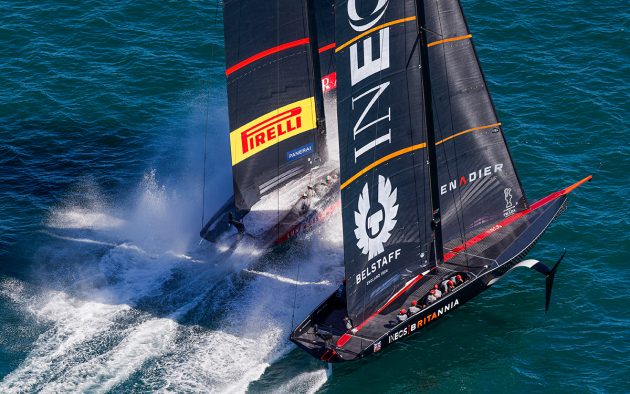 But with the projecting windward foil it must be very difficult for the windward boat to be confident they are keeping clear when the leeward boat luffs. James Spithill did a great job of luffing INEOS from a pretty weak, bow-back position with INEOS well advanced. You could say that Ben overreacted but with the Exclusion Zones [a 3m virtual no-go zone either side], it’s a nervous place to be. When INEOS was forced into a downspeed tack and came off the foils, that was a big gain to Luna Rossa.

After being forced away onto port tack, the British boat picked up a nice right-hand shift and was right back in the game at the top mark. But Luna Rossa were still in control until they made a terrible tack at the top of the course. It looks like the timing was out for lowering the new foil.

This affected the whole race because it looked like, from this moment on, Luna Rossa never trusted their manoeuvres again. And I think that impacted the Italian tactics a lot. There appeared to be a number of tactical errors by Luna Rossa later on, which might well have been down to the fact they didn’t have confidence in their manoeuvres, especially tacking.

On the final beat Luna Rossa could have stuck a lee-bow tack on INEOS but chose to carry on past them. If the positions had been reversed, I’m pretty sure Ben would have tacked and gone for the lee-bow on the Italians, and it would have all but closed out the race.

Due to hydraulics problems before the start, the Cunningham control couldn’t be adjusted during the race on INEOS Team UK. It appeared their rig was reasonably set up for the upwind conditions but lacking power downwind, forcing the Brits to sail bigger angles. This meant the course boundaries came up even quicker than usual.

Generally the America’s Cup course boundaries make it very hard to stay in phase with the wind shifts, because you often get forced away from the lifted tack. The boundaries change the tactics a lot, and it’s much harder to get control of the race on a narrow course, particularly if you’re not confident to put in close cover tacks.

On the final cross before the finish, INEOS Team UK just got across the bow of Luna Rossa, who were calling starboard on the British.

In the words of TV commentator Ken Read, Jimmy Spithill did a ‘Hollywood’ and tried to show the umpires that the close call is worthy of a penalty [by coming down lower].

It was pretty clear INEOS were always crossing ahead on port, so I think this was a straightforward call for the umpires.

Creating Magical Spaces for Your Baby to Grow In With évolur