Ancient architecture, lush gardens, and timeless legends: Europe’s stunningly-preserved palaces have the power to transport you back to times of opulence, intrigue and adventure – from Germany’s famed fairytale castle to a lustrous Roman palace in Croatia and a storied aristocratic mansion beside Corfu’s sparkling sea. Explore a diverse array of vibrant cultures and fascinating histories on an immersive tour of Europe’s top 10 must-see palaces, all located in some of the continent’s most charismatic cities and accessible via direct flights. 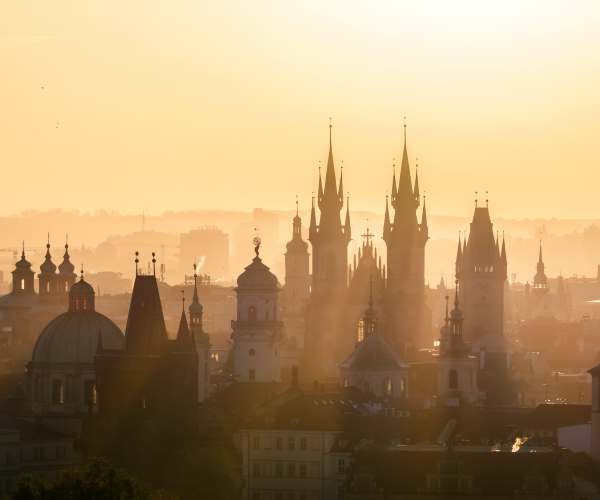 One of the most recognized palaces in the world, Buckingham Palace is a great way to start your tour of Europe’s grand residences. Starting out as a small townhouse for the Duke of Buckingham, it was purchased by William III as a private residence for Queen Charlotte, before becoming the official royal residence of Queen Victoria and all subsequent English monarchs. Architects John Nash and Edward Blore created the two side wings before Queen Victoria added the front section, completing the quadrangle and giving us the famous balcony where the royal family frequently greet the crowds. 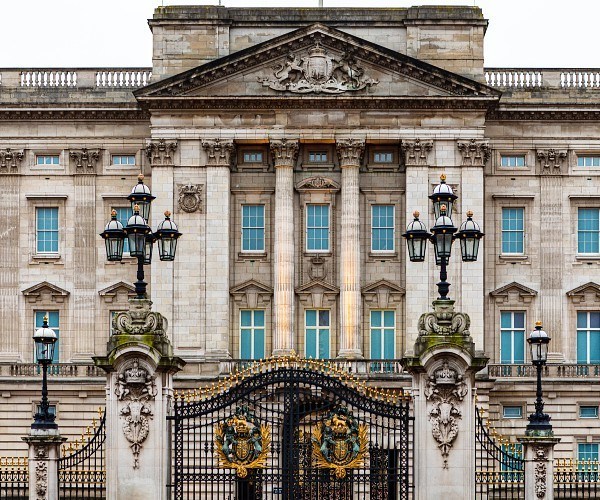 Highlights include the Picture Gallery, which features works by Italian artist Canaletto and Dutch master Vermeer, and the White Drawing Room where you can discover the mysteries of the palace by finding the secret door. Each year a different exhibition is held within the Ball Supper Room, displaying some exquisite treasures from the extensive Royal Collection. For an intimate look at the palace, book an expertly guided private tour with a champagne reception and walk out via the famous front gates – a privilege that few get to experience. To extend your palatial encounter, take the Royal Day Out tour, which includes entry to Buckingham Palace, the Royal Mews and the Queen’s Gallery.

Travel across the English Channel to the Palace of Versailles, which in its 17-the century heyday was an inspiration for monarchs across Europe, and today remains synonymous with opulence and luxury. Set just a 30-minute drive from Paris, the palace is perfectly located for a full-day tour that includes the Trianons and vast gardens, and plenty of time to return to the City of Lights for dinner. 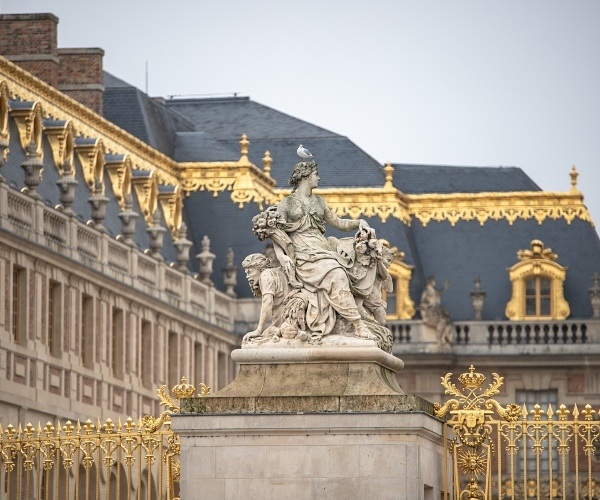 A focal point of the French Revolution,  the palace became the Museum of French History in 1837 and is now seen as central in presenting the pre-revolutionary regime. The palace’s legendary landscaped gardens were recently resown to replicate the layout of the gardens under Louis XIV. As you wander the grounds, discover the Petit Trianon, the favored retreat of Marie Antoinette and home to a bizarre mini village, complete with a windmill and dairy. Another highlight is the Hall of Mirrors, a gilded bronze chamber with over 300 mirrors, designed to display the political, economic, and artistic excellence of Louis XIV.

From Paris, fly direct to Oslo to see the Royal Palace, a concrete symbol of Norwegian history embodying the mystical world of Norse mythology. The interiors reflect varying 19th-century styles, from Pompeian frescoes in the Banqueting Hall to Neo-Rococo in the White Parlour. In the breathtaking Bird Room, designed by Johannes Flintoe in the National Romantic style, gaze up at more than 20 different species of birds and butterflies in a chamber painted to resemble an open courtyard, with bright blue skies and landscapes that evoke the country’s unique natural beauty. 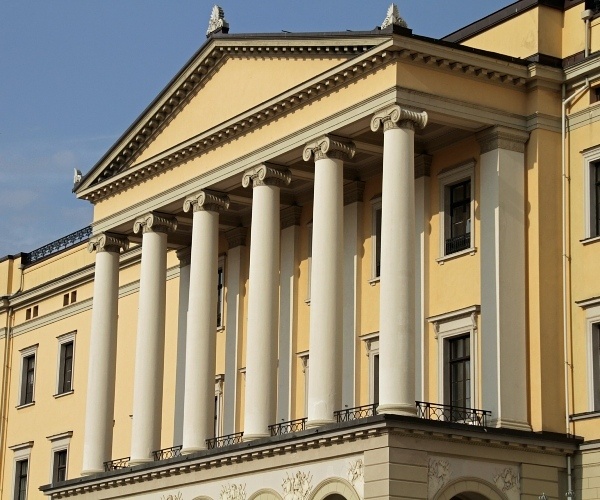 Let’s travel from the fairytale landscapes in Norway to a castle inspired by ancient folklore in the birthplace of the Brothers Grimm. Nestled on a rugged cliff, Neuschwanstein was the inspiration for Walt Disney’s castle. Commissioned by King Ludwig II of Bavaria in tribute to his ancestors and Wagner’s opera sagas, the castle is regarded as one of the major works of European historicism, with its mix of Romanesque, Gothic, and Byzantine styles, which Ludwig fused together to achieve his romantic ideal of the Middle Ages. An artificial cave with uninterrupted views of the Alpine foothills, Singer’s Hall was built solely as the setting for Wagner’s Tannhäuser, and provides the perfect backdrop to this musical masterpiece. 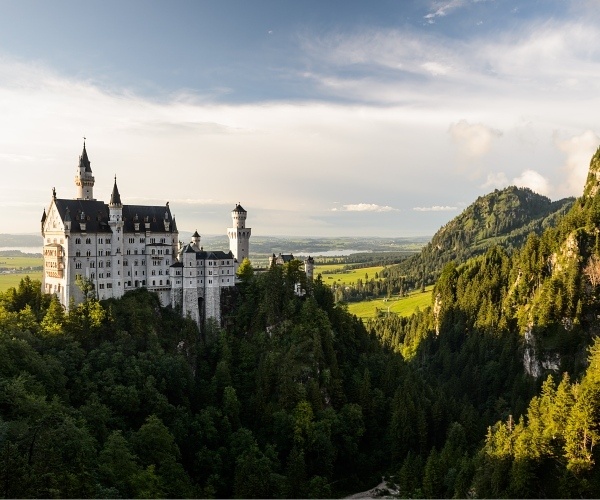 A two-hour journey will get you from Munich to Füssen; if you have time, spend a few days exploring the town’s history as the center for violin manufacturing.

The name may conjure images of an ancient Greek temple, but actually Achilleion is a 19th century palace with a sad story. The palace was built on the island of Corfu as a retreat for the Empress Elisabeth of Austria, who was mourning the death of her son, the Crown Prince Rudolf. The Empress is said to have described Achilleion as “worthy of Achilles, who despised all mortals and did not fear even the gods”. The palace was designed as the Empress’s tribute to Greek language and culture, born from her desire to leave the realities of the royal court and her grief behind. The building alludes to the mythical place of Phaeacia and the architectural motif centers on Achilles. The statue Dying Achilles by Ernst Herter is the main feature of the palace gardens, which also offer panoramic views of the island out towards the Ionian Sea. 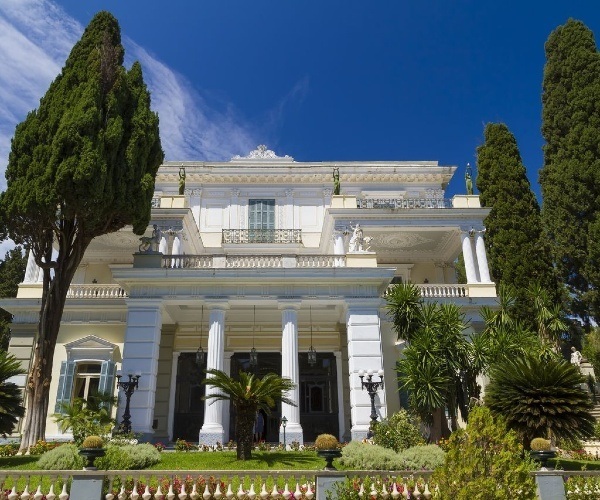 To delve deeper into Corfu’s mythological connections, take a private tour of the island. Reach Corfu either with a direct flight from Rome, or stop to explore the vibrant city of Athens for a few days first, traveling to Corfu either by plane or overland, stopping at Delphi en route.

From Corfu, fly to Rome and take a 35-minute transfer to Tivoli, home to Hadrian’s Villa. A vast villa complex with pools, baths, fountains, and wilderness gardens, the site is a living archeological site where treasures are still being discovered. In 2013, archeologists unearthed an amazing network of underground tunnels, presumably for servants and workers to move about without disturbing the idyllic environment overhead. What draws people to this villa is the Maritime Theater, a unique piece of Roman architecture which is not a theater at all, but rather a villa within a villa. Historians have debated the purpose of this theater, with many arguing it was built as a home for Hadrian and his lover, Antonius. Antonius tragically drowned whilst in the Egyptian city of Canopus, and Hadrian had his own River Nile built in the grounds of his villa, as a reminder of what he had lost. Feel the love and grief built into the villa as you wander through this idyllic retreat bathed in emotion undiluted by the centuries. 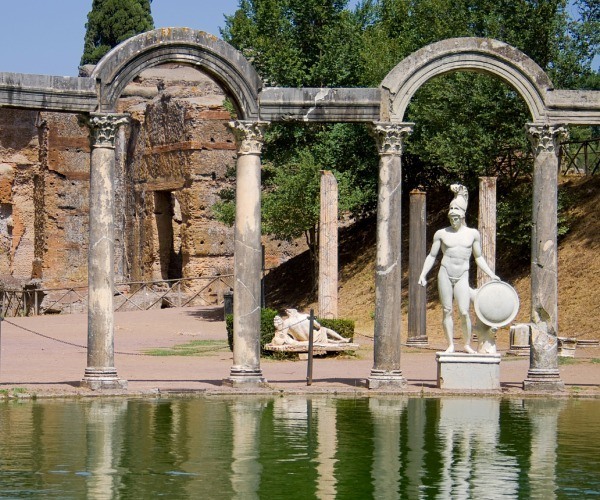 Travel forwards in history to 305 AD as you head to Split to explore Diocletian’s Palace, the world’s most complete remains of a Roman palace. Built by the eponymous emperor for his retirement, the palace doubled as a military garrison and comprises about half of Split’s old town within its labyrinthine walls. Set in a prime harborside location, the complex seamlessly combines old and new with open markets, authentic stores, traditional taverns, and boutique hotels standing alongside an ancient cathedral and shining marble floors. In an exclusive tour, delve beneath the palace’s surface with a local speleologist to discover the wonder of Roman engineering amid an ancient aqueduct. A city unlike anywhere else, Split truly deserves its UNESCO World Heritage status. 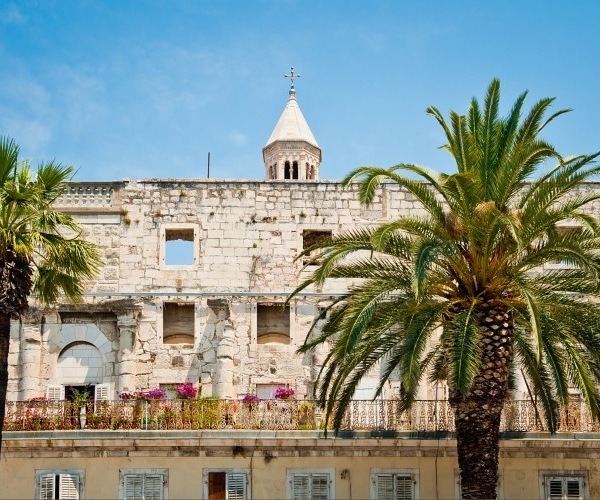 Traveling up into central Europe, head to Prague Castle, the world’s largest coherent castle complex in the world. Built in Romanesque style around the 10th century, the impressive structure continues to dominate Czechia’s skyline. The castle was home to key historical figures including Charles IV, the Holy Roman Emperor and Maria Theresa, the only female ruler of the Habsburg monarchy.  In 1942, during WWII, German governor Reinhard Heydrich was assassinated by members of the Czech resistance – an incident eerily reminiscent of the age old myth that any usurper who wears the crown of Bohemia will die within the year. Today, the Bohemian Crown Jewels remain hidden within the castle walls, and the legend of their curse lives on.

Open to visitors during the summer months, Palacio Real is a working palace where King Juan Carlos frequently hosts state visits.  It started out as an Alcazar built in the 16th century, a Moorish castle erected under Islamic rule. Sadly, much of this original structure was lost and in 1755 Philip V oversaw the building of the current structure, which is made entirely from stone. Highlights include the library, which houses the first copy of Don Quixote, and the ceiling painting by Anton Raphael Mengs, the “German Raphael”, found in the Comedor de Gala (Gala Dining Room). Explore the extensive gardens of the palace before heading towards Parque del Oeste to find the Egyptian Temple of Debod, where locals picnic on local produce from one of Madrid’s numerous markets. As the sun begins to set, gaze out over Madrid’s intoxicating skyline as the Palacio Real glistens in the evening’s golden hues. For a bonus palace, head south to Granada and explore the inimitable Alhambra, a Moorish gem that perfectly primes you for your next stop in North Africa. 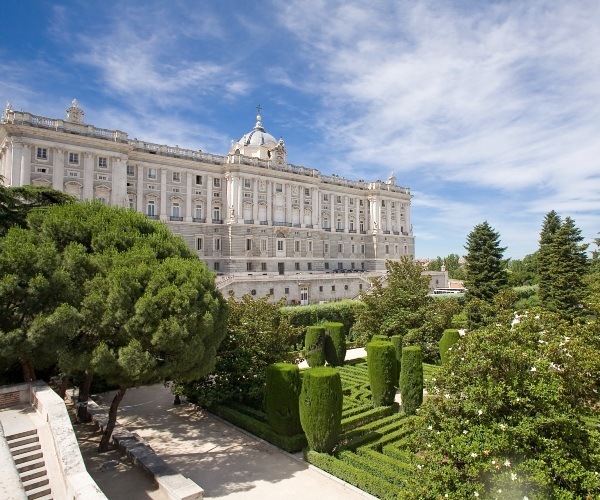 Though not technically in Europe, Marrakech is easily accessible from Spain and simply can’t be left out. Rumour has it that the Bahia Palace is named after Ba Ahmed’s favorite wife, al-Bahia, meaning “the brilliant”, and it certainly lives up to its name. THe spectacular palace is located along the northern edge of the Mellah and the southern edge of the Medina,  surrounded by the hustle and bustle of the city’s famous souks, where locals sell their wares and sip coffee and mint tea on street corners. Inside, the Bahia is an oasis of tranquillity, its piecemeal construction by numerous grand viziers and sultans creating a maze of walls, windows and alcoves adorned with beautiful decorations. Meander through the corridors and courtyards, drinking in this perfect example of traditional riad architecture, and discover the Grand Riad, whose typical symmetrical design has a calming effect on the eyes and the soul. 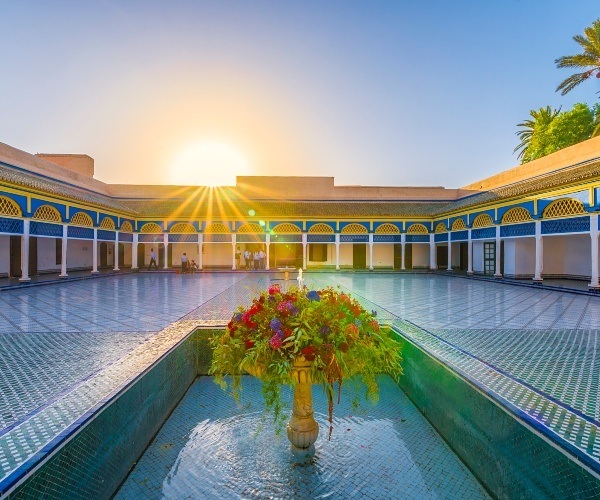 Europe is home to some of the very best palaces in the world. When visiting these palaces’ grand halls, ornate rooms, and luscious gardens, you’ll be inspired to delve deeper into the history of these living legends.

Anna Mascaro is Founder of Terracotta Travel. Terracotta Travel is a boutique travel agency that caters for luxury travellers who want to go beyond the guidebook and behind the scenes in every corner of the world.

Planning a Camping Trip? Here is Everything You Need