A worker repairs a power line in Austin, Texas, on Thursday. Although power was slowly being restored to much of the state, weather-related water issues persist. 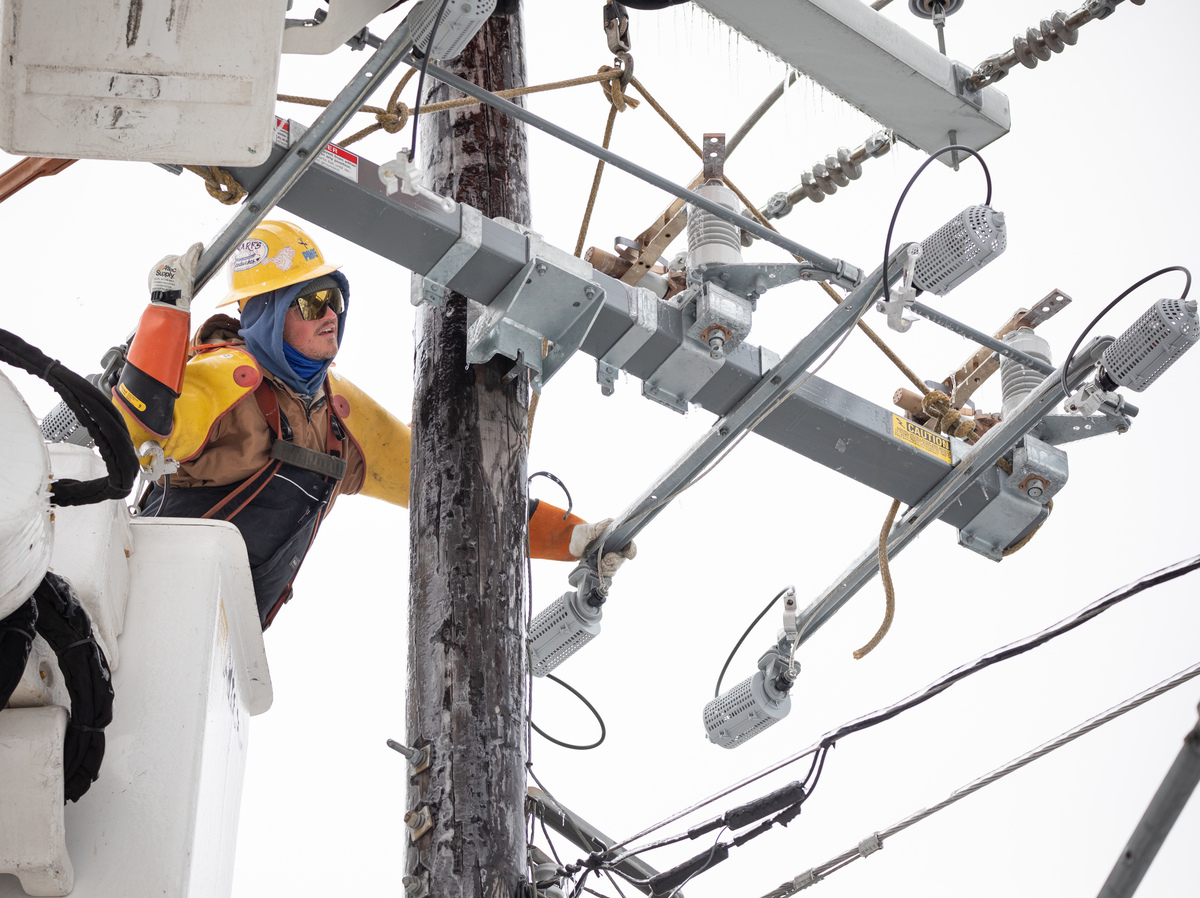 A worker repairs a power line in Austin, Texas, on Thursday. Although power was slowly being restored to much of the state, weather-related water issues persist.

Many Texans who faced days of near-freezing temperatures without electricity to keep warm were breathing a sigh of relief Friday as the lights and heat came back on. But millions are still without water and the state’s governor is warning that the crisis isn’t over.

As of early Friday, 187,000 customers were still without power, but that figure was down dramatically from about 4.5 million on Tuesday and some 600,000 still in the dark on Thursday. Even so, the Electric Reliability Council of Texas, or ERCOT, said rolling blackouts remained a possibility and cautioned that some homes may remain without power even after their neighbors get power back — especially in Central Texas, member station KUT reports.

“You can just imagine live oak trees, which still have leaves on it, and you’ve got a bunch of ice on it,” said Dan Woodfin, ERCOT’s director of systems operations. “If those fall on lines then crews have to go out and fix those lines.”

Elsewhere in the country, the aftermath of the storms — which brought snow and freezing rain to a large section of the U.S. this week — were still wreaking havoc with the power grid. Another 180,000 people remained without electricity in Louisiana and Mississippi, more than 100,000 in Kentucky and the Virginias, and some 70,000 in Oregon.

The extreme weather was blamed for at least 56 deaths, according to The Associated Press, with many having died as they tried to keep warm.

Millions of people in hardest-hit Texas still had either no water at all, or residents were being told to boil their water to make it safe to drink, after the sub-zero temperatures burst lines and the historic winter storms knocked water treatment plants offline.

Houston Mayor Sylvester Turner said the city’s residents would probably have to boil water until Sunday or Monday.

Dr. Joseph Varon, chief of staff at United Memorial Medical Center in Houston, has been managing care for COVID-19 patients for 336 straight days. He tells NPR’s Morning Edition that it’s been “just hell, both personally and professionally.”

“At home, for example, I have no water,” he said. “We just got back electricity after almost 96 hours without electricity. I’ve literally had to rent a hotel room so I can take a shower because I haven’t taken a shower in 72 hours.”

The hospital, too, has no water, he says. “Many of the hospitals in the Houston metropolitan area have no water.”

“It’s a true disaster. Many of the machines that we work with … require water to function,” he says.

Toby Baker, executive director of the Texas Commission on Environmental Quality, said water pressure had dropped due to frozen lines and because people were letting faucets drip to prevent pipes in their own homes from freezing solid. The commission said that as of Thursday afternoon, more than 1,000 Texas public water systems had reported disruptions affecting more than 14 million people.

Residents of Texas “are not out of the woods,” Abbott cautioned.

“We will not stop until normalcy is restored to your lives,” he said in a Thursday news briefing. “Until that moment comes, I ask all Texans to continue your efforts to take the precautions that are needed to stay safe and warm.”

The governor has asked the state legislature to investigate ERCOT, which manages the electric grid for about 90% of the state.

State Sen. José Menendez, a Democrat from San Antonio, said Texas should have winterized its infrastructure after a rare winter storm hit in 2011. He says it’s not just ERCOT that is to blame, but that Texas politicians, including himself, should be held accountable.

“[T]he average Texan shouldn’t have to be required to know how the electric grid works, shouldn’t be required to know that power plants are winterized or not winterized,” he told NPR. “They’re paying their bills and they elect us to go up to Austin, Texas, to make tough decisions. And if we don’t have what it takes to do that and take the responsibility, then we obviously, as elected officials, have failed.”

Speaking to Morning Edition, Natasha Harper-Madison, a member of the Austin City Council, called the situation in Texas “a Katrina-scale crisis.”

“We’re desperately waiting for state and federal cavalry to come a runnin’,” she said.

Nonetheless, Harper-Madison said, “we’re seeing an astonishing response from our own community: People are stepping up in ways that, frankly, will bring you to tears.”

“They’re opening their homes to complete strangers so that they can warm themselves, have a bite to eat, charge their devices,” she said. “Restaurants are serving up free food. Breweries are stepping up to distribute drinking water.”

In Tennessee, some 260,000 homes and businesses in and around Memphis had been told to boil water, according to The Associated Press. The Memphis International Airport was forced to cancel all flights due to water pressure issues.

Ongoing @mlgw system-wide water pressure issues have forced the closure of the @flymemphis passenger terminal. Airlines have canceled all flights today. Airport will reopen once water service has been restored. https://t.co/UZf4E21yJE

The mayor of Jackson, Miss., Chokwe Antar Lumumba, told the AP that most of the city of about 150,000 was without water Thursday night. “We are dealing with an extreme challenge with getting more water through our distribution system,” he said.

While the challenges resulting from the severe weather this week continue, at least the forecast looks to be improving. Overnight, the National Weather Service map of weather conditions across the country, which had earlier shown large swathes of warnings, had reverted mostly to advisories by Friday morning.

Chicago orders some teachers to resume in-person classes next week, setting up showdown with union

Heavy snow across Rockies and Cascades, seasonable air returns to the Gulf Coast