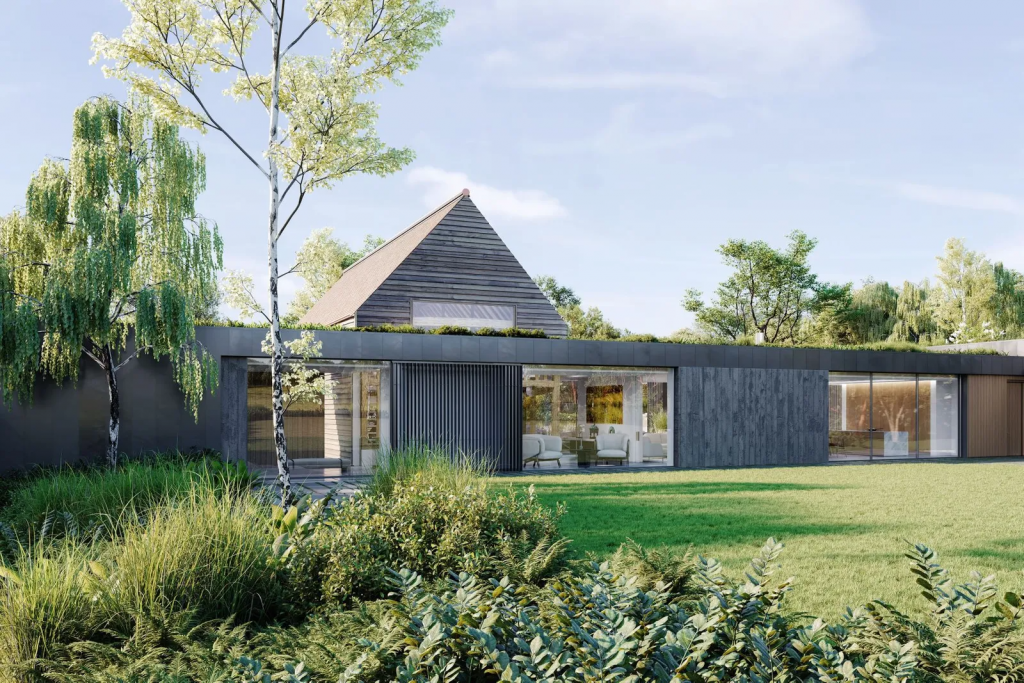 For British affluents, it has long been fashionable to trade the bustling furor of London for the bucolic calm of the countryside. While it’s necessary to travel into town for business and leisure, the greatest privilege is the option to leave it behind at the end of the day’s responsibilities and escape to a country estate somewhere green, serene, and private.

Picture a traditional English cottage garden, with all its bountiful, blossoming excesses. Now imagine it stretching as far as the eye can see—this is what the Surrey countryside outside of London looks like, especially in late spring and early summer. Native flowers grow so thick that familiar side paths vanish beneath them, and the air vibrates with a symphony of birdsong and the hum of honeybees.

This is where the village of Oxshott is located, and where Birchwood House will be built to complement a renovated farmhouse and heritage buildings nestled within the English countryside.Morning:

Celebrate the Start of Summer at the Royal Academy 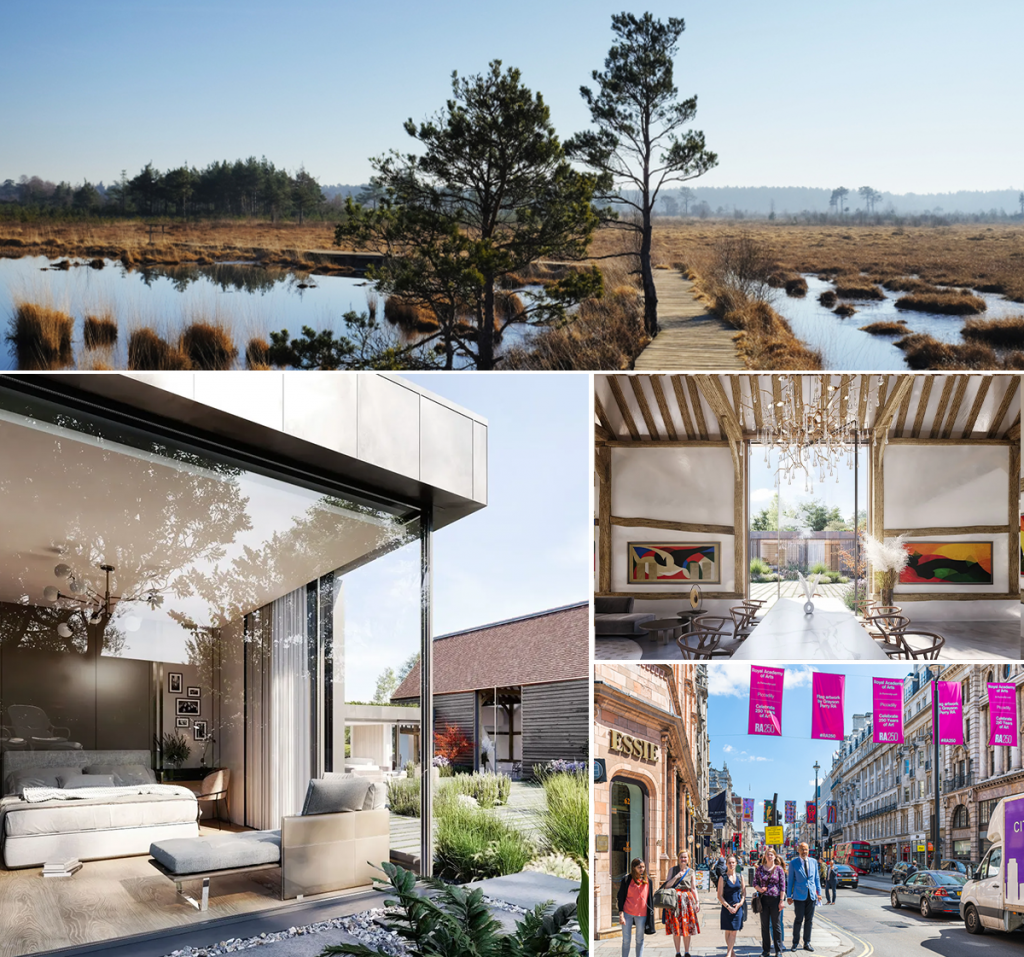 Unobstructed views and access to nature beckon when you wake up in the western wing, as the primary suite and bedrooms are situated right by the garden and pond. This wing of the house feels like a contemporary gallery, with ample natural light illuminating the spaces between the suites. But the real majesty comes when you reach your main living and reception area.

An immense timber-framed barn, once owned by Prince Leopold I of Belgium, forms the centerpiece of Birchwood House, and has been repurposed as an open-plan seating and dining area. Overhead, a mezzanine provides a lofty perch to take it all in; and all around you, pivoting panels of glass serve as your gateway to the garden. This is where you enjoy your breakfast before setting off for your first excursion of the day.

Driving to Central London would be easy enough—it takes around an hour to get there—but why worry about taking the car into the hectic heart of downtown when Oxshott Station is within walking distance? After a short stroll, you’re on the train and efficiently ferried to historic Piccadilly, where the Royal Academy of Arts’ annual Summer Exhibition is in full swing.

The street is lined with festive banners celebrating an event billed as “the world’s most joyful art experience”. But it’s more than an effervescent affair, as it also presents a unique opportunity for collectors. Unlike other art shows, most of the works at the Summer Exhibition are on sale—this time-honored fundraising tradition helps the Royal Academy provide arts programming for the public and free tuition for its post-graduates. You’ll find an eclectic mix of paintings, photographs, prints, films, and sculptures by Royal Academicians, international art celebrities, invited guests, and the next generation of up-and-coming talent.

Noon: Picnic in Your Own Private Park, Then Get to Glastonbury

Rather than staying in town for lunch, you can’t resist returning to Oxshott, and who can blame you? The community has had the distinction of being called “the most expensive village in England” because it has attracted high-end homebuyers for decades with its idyllic settings. Today, the quiet majesty of Oxshott High Street signals a prestige that few other municipalities can claim. 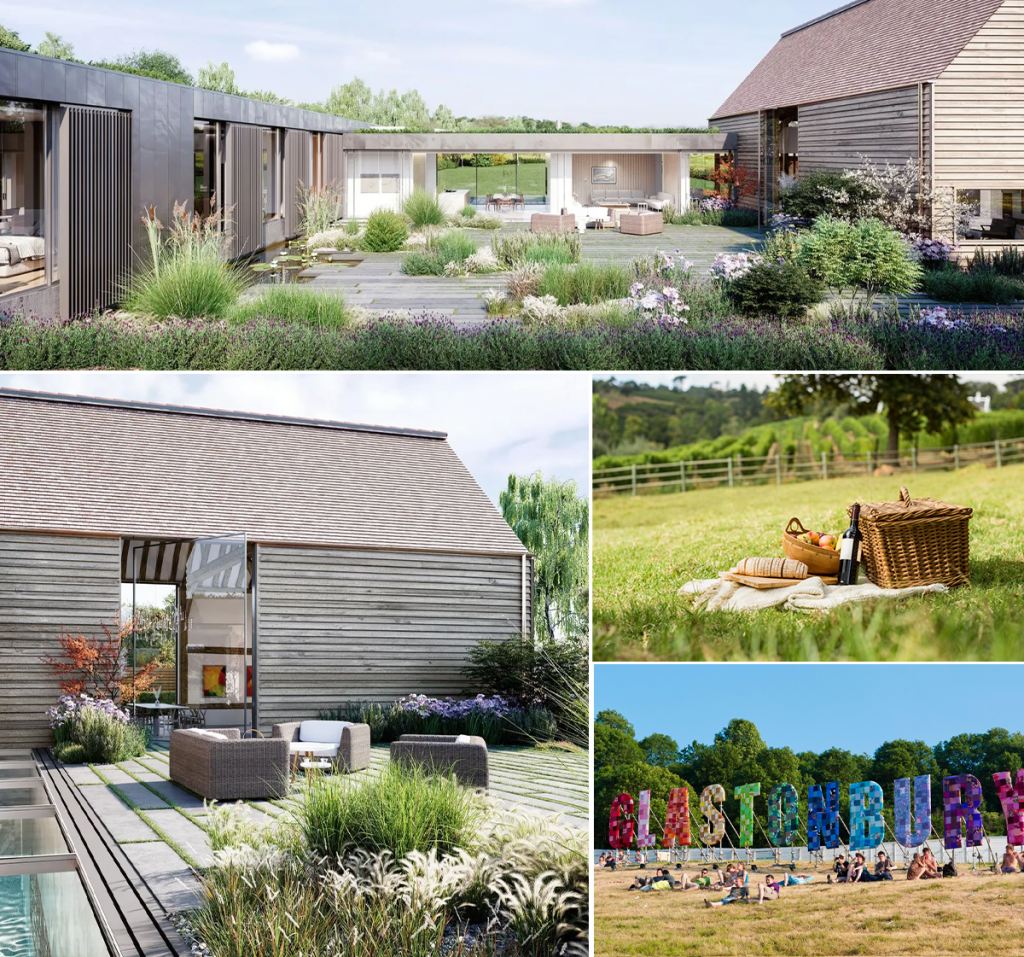 Yet your piece of property is more covetable still. While there are several popular areas in the village, such as Danes Way Estate and Knott Park Estate, the Crown Estate is the most desirable of them all. It used to be one of the royal family’s ancient hunting grounds, until the 18th century. Now, it’s your backyard.

Enjoy lunch in your English country oasis, with a garden designed by acclaimed landscape architect Jinny Blom. But don’t languish too long, because this is the last day of the Glastonbury Festival. Lucky for you, Birchwood House is minutes away from major motorways—the M25, M3, and A3—and so you head to the garage and car lift, tastefully concealed behind the central barn, and head out.

Of course, Glastonbury doesn’t disappoint. The afternoon presents a lineup of spectacular musical acts, satiating your auditory appetite for both nostalgia and new discovery. And the festival’s focus on solar energy, carbon-capturing, and reduction of single-use plastics mirrors the environmentally sustainable values built into the eco-centric, low-energy design of Birchwood House.

Night: Take a Restful Stroll, and Ready Tomorrow for Wimbledon 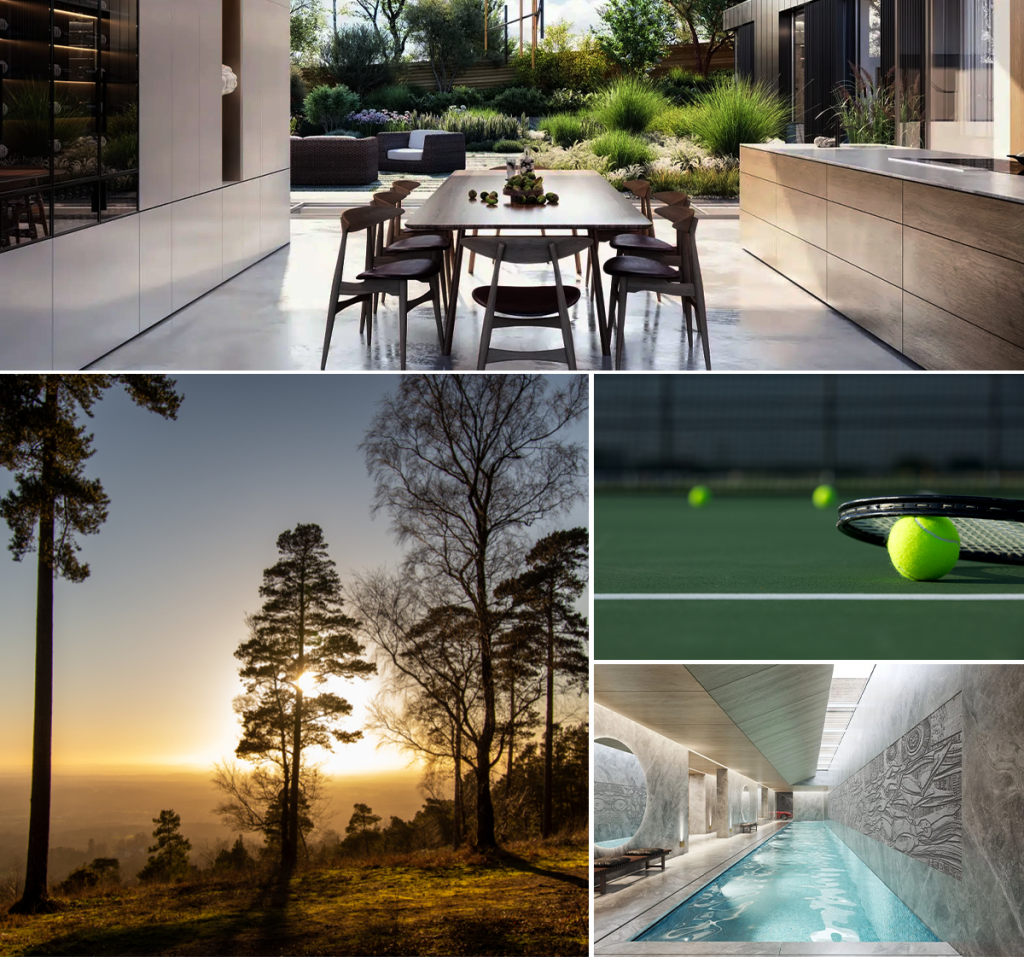 It’s getting late in the evening. The grand finale at Glastonbury is not your cup of tea, so you drive back to your estate while the sun is still in the sky. The first day of summer was less than a week ago, after all—and tomorrow is the first day of The Championships, Wimbledon. You intend to be there to witness a brand new start to the world’s oldest and most important tennis tournament.

Expect to see some of your neighbors there, as Oxshott’s notable residents include tennis icons and football legends, among other renowned personalities. They are all gathered together in a village of some 5,000 inhabitants, drawn by the combination of accessibility and exclusivity provided by the picturesque Surrey countryside.

After having a late supper, you decide to take a walk through that pastoral paradise. The Prince’s Coverts, a well-maintained woodland comprising some 860 acres, is due south of your property, and it’s magnificent at twilight. You make a circuit and then return to Birchwood House, ready to rest. It’ll be a busy day tomorrow, though fortunately for you, the iconic All England Club—where Wimbeldon occurs—is even closer than London. You can’t help but look forward to what the day, and the rest of the English summer, has in store.

Read more from our Life of Luxury series

Vendée Globe: Race on for 2024 entries

How to install a loft ladder properly?

Toyota Supra getting a manual transmission