The four members of Led Zeppelin certainly didn’t know they were creating an anthem for the ages when they began writing “Stairway to Heaven” in early 1971. But make no mistake: The band was intentional in creating a classic track.

Guitarist Jimmy Page once said he aimed to craft a new song with an epic magnitude similar to 1968’s “Dazed and Confused.”

“The idea was to have a song which would actually change as we went through it,” Page explained. “Layers would unfold with the instruments as they were coming in, and the drums would be coming in later as the song progressed, and there’d be this movement to the guitar solo that took you through, and the momentum would unfold as the pace accelerated. I knew something like that wasn’t necessarily the done thing in popular music. It was done in classical music, but it was tricky with sort of rehearsing it and routine-ing it until [singer] Robert [Plant] had gotten the lyrics, and then it came together, really. The performances of it were more complete once it had the lyrics there, but it gave us the opportunity to really build something and shape it to perfection.”

Page and Plant diverged on their views of “Stairway.” Page told Rolling Stone that it “crystallized the essence of the band,” while Plant frequently expressed weariness toward it, preferring “Kashmir” as more representative of the band. He told Dan Rather that “it belongs to a particular time” and once gave a Portland, Ore., public radio station $10,000 to never play “Stairway” again. Page recalled that, at the Atlantic Records 40th-anniversary concert in 1988 at Madison Square Garden, where Plant had to be cajoled into performing the song, “The final thing Robert said to me was, ‘I’m never going to sing ‘Stairway’ again.’ I thought, ‘Well, good luck to you, mate.’”

Meanwhile, among fans and the larger pop culture, there’s no ambivalence. “Stairway to Heaven”s classic status has given it a rich and enduring afterlife, in places both appropriate and unexpected.

“Stairway” was performed at every Led Zeppelin concert after its recording, starting March 5, 1971, in Belfast (eight months before its release) and through reunion shows at Live Aid, Atlantic’s 40th anniversary and the 2007 Ahmet Ertegun Tribute Concert in London.

At the beginning of 1982, Trinity Broadcasting Network host Paul Crouch claimed “Stairway to Heaven” was among the rock songs that used backmasking to deliver Satanic messages when played backward. Crouch contended that the “bustle in your hedgerow” section reversed declared, “Here’s to my sweet Satan/The one whose little path would make me sad, whose power is Satan” and more. The claim led a California assemblyman to introduce a state law requiring warning labels for backmasking — a measure that went nowhere. Plant told Musician magazine such ideas were “very sad,” while longtime Zep recording engineer Eddie Kramer told Led Zeppelin biographer Stephen Davis the idea was “totally and utterly ludicrous.” In a formal statement at the time, Led Zep’s Swan Song Records countered, “Our turntables only play in one direction — forward.”

Jimmy Page Won’t Let Anybody but Robert Plant Sing It

Page played an instrumental version during a 1988 tour supporting his solo album Outrider, feeling that nobody should sing the song with him but Plant.

In 1989, the Australian talk show The Money or the Gun had a weekly guest perform a version of “Stairway to Heaven,” ranging from funk, swing and reggae to ska, spoken-word pieces and other styles. The show released a compilation album of the performances, Stairways to Heaven, in 1992.

“Stairway to Heaven” Is So Good, It Even Works as Muzak

In January 1990, “Stairway” climbed into the Muzak playlist with a solo harp rendition suitable for elevators and dentists’ offices.

In 1990, a St. Petersburg, Fla., radio station launched an all-Led Zeppelin format with a 24-hour “Stairway to Heaven” marathon. And in January 1991, Albuquerque, N.M., radio station KLSK played “Stairway” more than 200 times, for more than 24 hours, as a publicity stunt for a format switch to classic rock.

In 1992’s Wayne’s World, a music store selling a guitar cherished by Mike Myers‘ Wayne Campbell has a sign declaring “NO Stairway to Heaven” — based on real-life shops that grew tired of shoppers trying out instruments by playing the song.

Boone-ing a “Stairway to Heaven”

Pat Boone, credited with milquetoast-ing hits by Little Richard, Fats Domino and others during the late ’50s and early ’60s, took on “Stairway” as the closing track of his 1997 album, In a Metal Mood: No More Mr. Nice Guy, where the song sat alongside Boone-ified covers of songs by AC/DC, Deep Purple, Van Halen, Metallica, Dio, the Jimi Hendrix Experience and Alice Cooper.

“Stairway to Heaven,” Even in Name, Is a Pop Culture Staple

Several films and TV shows used “Stairway to Heaven” for their titles, included series in South Korea, the Philippines and Canada. It was also used as episode titles for Grey’s Anatomy and First Person.

The Song Was Almost in Almost Famous

“Stairway to Heaven” was incorporated in a deleted scene from Led Zeppelin confidante Cameron Crowe‘s autobiographical film Almost Famous, playing while main character William Miller’s (Patrick Fugit) teacher and others try to convince his strict mother (Frances McDormand) to let him go on tour with the movie’s mythical band Stillwater.

Dolly Parton Added Her Signature Twang to “Stairway to Heaven”

Dolly Parton recorded an Americana take of the classic song for her 2002 album, Halos & Horns, featuring banjo, fiddle, acoustic guitar, a vocal chorale and a revised arrangement of the lyrics.

Mary J. Blige recorded a rendition of “Stairway” in 2010, with Steve Vai and Orianthi on guitars, Randy Jackson on bass and Blink-182‘s Travis Barker on drums. It appeared as a bonus track on the U.K. reissue of her 2009 album, Stronger With Each Tear, and Blige, who told MTV she was a Zep fan who “listened to their music since I was a child,” performed it in April 2010 on American Idol.

“Stairway” Got Synchronized at the Olympics

For the 2009 World Aquatics Championships in Rome, the Spanish Synchronized Swimming Team sequenced one of its Gold Medal-winning routines to “Stairway.”

Dozens of Other Famous Artists Have Covered “Stairway to Heaven”

When Led Zeppelin received a Kennedy Center Honor in December 2012 in Washington, D.C., they were feted with an arresting “Stairway” by Ann and Nancy Wilson of Heart, John Bonham‘s son Jason on drums, string and brass sections and a full choir in front of a visibly delighted Page, Plant and John Paul Jones. “Oh, man, that was one of the most powerful highs I ever had,” Ann Wilson said shortly afterward. “It wasn’t like, ‘Hey, we’re gonna throw you a bone. You can do ‘Rock and Roll’ or some song like that. No, it was like, ‘You can do ‘Stairway to Heaven,’ probably the most potent Zeppelin song ever written. So we really had an amazing evening, and it came off really well. Nancy and I were just thrilled. They please me to the depths of my soul, so for us to get to turn around and make them happy for eight minutes, I’d call it even.”

“Stairway to Heaven” Wound Up the Center of Legal Drama

Led Zeppelin were famously sued in 2014 by the trust of Spirit‘s Randy California, alleging copyright infringement and claiming that “Stairway” plagiarized the Spirit song “Taurus.” Led Zeppelin had opened for Spirit during their first U.S. tour. The suit went through testimony, verdicts and appeals before the United States Court of Appels for the Ninth Circuit in San Francisco ruled in the band’s favor. The U.S. Supreme Court refused to a subsequent request to hear the case.

“Stairway to Heaven” was used as the title for a 2017 memorial commemorating the 1943 British tube train disaster at the Bethnal Green station in London.

“Stairway” to the White House Roof

During the summer of 1974, as his father Gerald Ford took over the U.S. presidency following Richard Nixon’s resignation, 18-year-old Steve Ford and a friend took his stereo to the White House roof and played Led Zeppelin music, including “Stairway to Heaven,” so loud it could be heard across the street. The incident was subsequently referenced in the Netflix series House of Cards.

A popular (and hilarious) internet meme titled “John Bonham during the first 4 minutes of Stairway to Heaven” shows Kermit the Frog fishing, sitting on a rock in pondering position, watching rain from a window and leaning against a lamppost while waiting until it’s time for the drums to kick in. 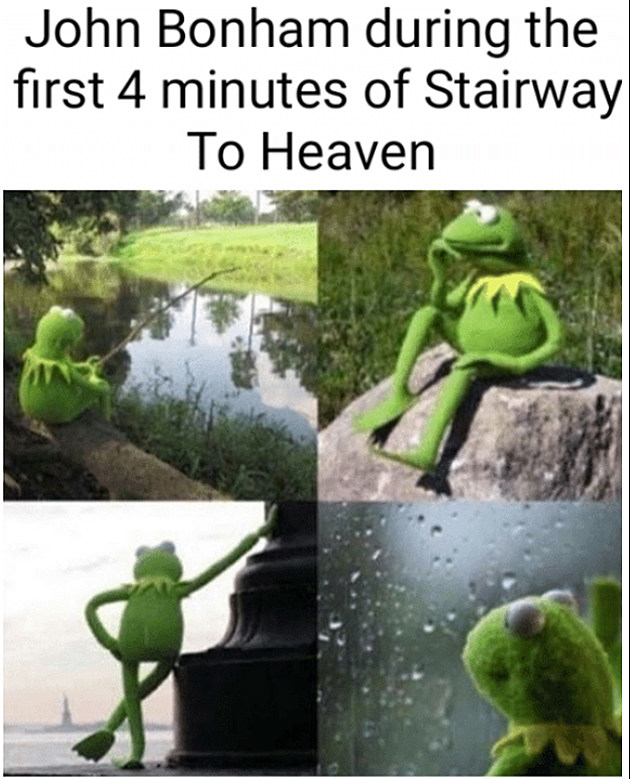 Next: Why Led Zeppelin Added a Second Singer for ‘The Battle of Evermore’

Megan Thee Stallion addresses her haters on ‘Tuned In Freestyle’