La Clef Champs Élysées by the Crest Collection, The Key to Paris

There are some hotels that make you feel like you’ve arrived at a welcoming enclave nestled in the heart of a city. La Clef Champs Élysées by the Crest Collection, a five-star boutique property in the 8th arrondissement in Paris, is such a hotel. (La Clef Champs-Élysées Paris 46, Rue de Bassano 75008 Paris). 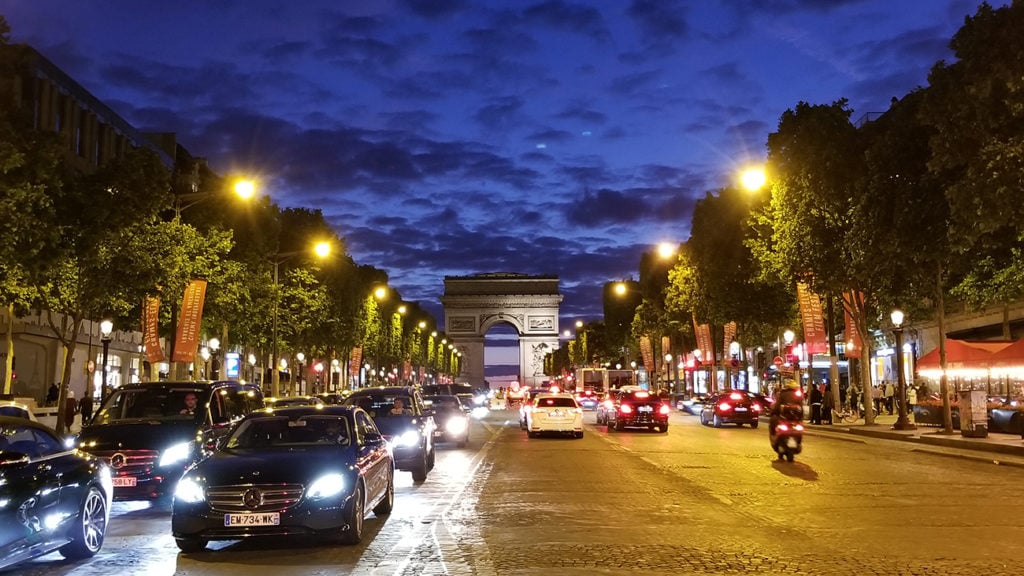 Situated off the Avenue des, Champs Élysées anchored on one end by the Arc de Triomphe; you’re minutes away from the city’s top attractions such as the Place de Concorde, Grand Palais, Jardin des Tuileries, Place Vendôme, museums such as the Louvre and the Orsay, the Opera Garnier, and the most iconic Parisian landmark of all — the Eiffel Tower. There’s a metro stop, the George V (line one), conveniently nearby. For shopaholics, you’re a ten-minute walk from the Golden Triangle of the Champs Élysées and the Avenue Montaigne district with high-end haute couture and prêt-à-porter fashion boutiques: Chanel, Dior, Hermes, Celine, Valentino, Louis Vuitton’s Art Deco flagship store, and my personal favorite —  Elie Saab, a label worn by Queen Rania of Jordan, Rihanna and other royal and pop princesses. 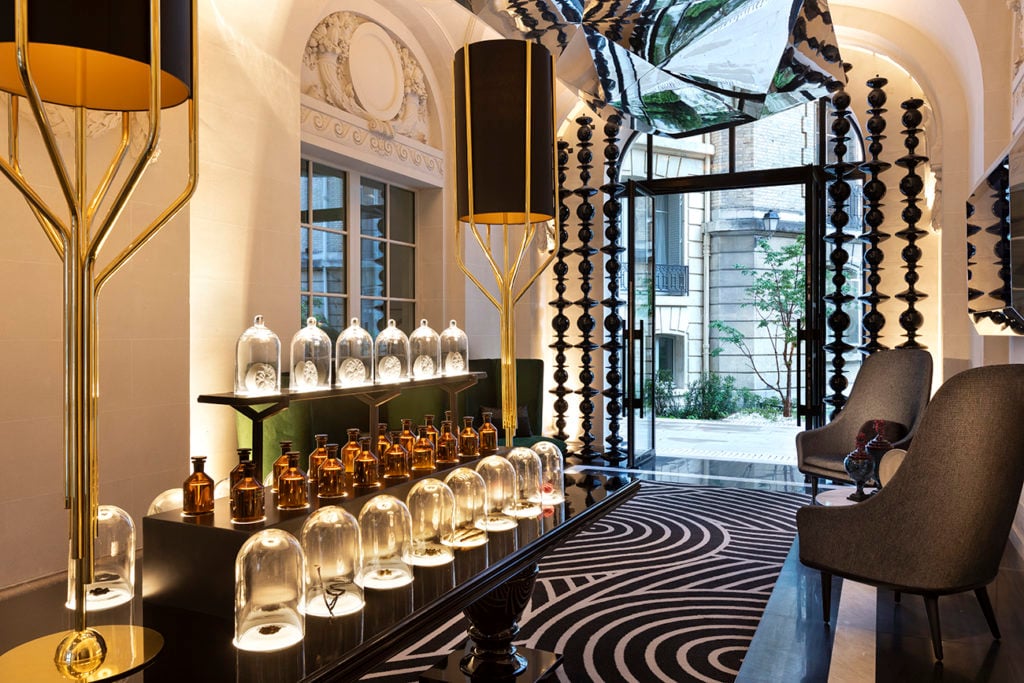 Built-in 1907 by the Hennessy cognac family, La Clef Champs Élysées is housed in a traditional Haussmannian, historic building. The interior has been transformed into a sophisticated oasis with herringbone marble floors, geometric-patterned carpets, chic designer furniture, and contemporary art gracing the walls, yet still retaining the building’s original crown moldings and details such as the wrought-iron railing on the staircase. At the front entrance are lacquered black columns resembling beads lending to a modern art museum vibe. As you step inside the long atrium foyer, a mirrored sculpture hangs above a perfume table lined with jars of different scents that you can sample, as well as perfume-making ingredients placed under bell jars. 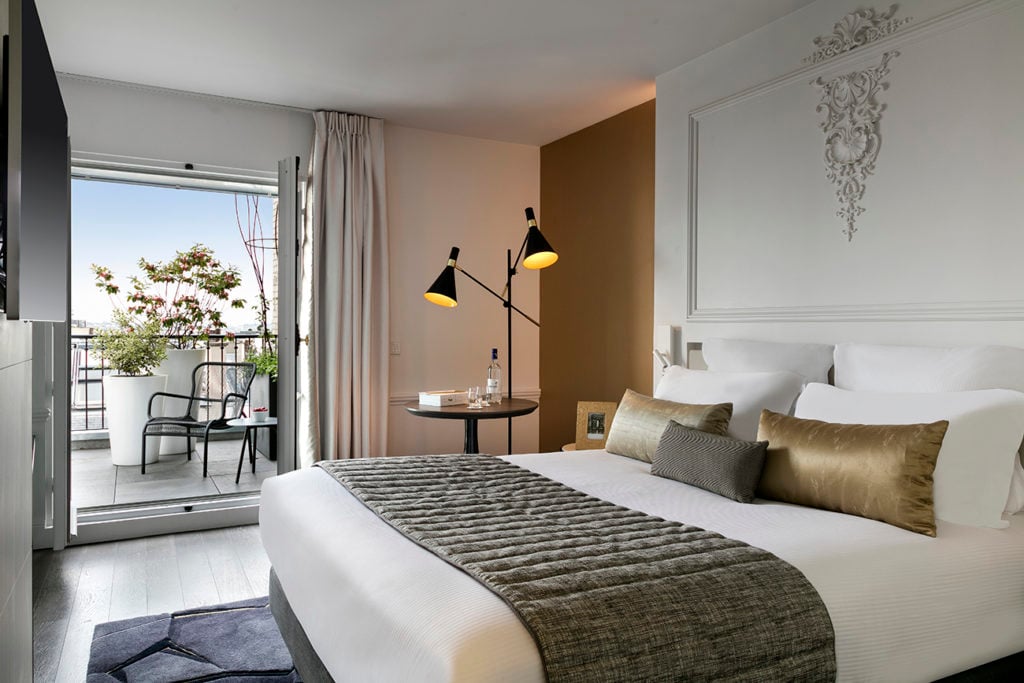 Modern, tastefully furnished rooms feature high ceilings and white walls with molded ornamental detailing above the king-size bed, dark wood flooring, pale gray veneer cupboards, and built-in bookcases. There are 63 rooms and suites ranging in size from 248 sq. ft. for an Executive Room to 377 sq. ft. for an Executive Studio. All come with a minibar, LCD flat-screen TV with international channels, free high-speed Wi-Fi, iOS / Android dock, hairdryer, and electronic safe. For your own Parisian apartment feel, there are seven one-bedroom apartments with a fully-equipped kitchen, including a refrigerator, microwave, dishwasher, and Nespresso coffee machine. The duplexes with terraces overlook the Golden Triangle area offering views of the Eiffel Tower and Paris rooftops. (Ooh, La La!)

Bathrooms feature marble floors, and walls come with a separate room for the large monsoon shower. Bath amenities are provided by L’Occitane-de-Provence. Some showers, in the Suite category and above, have Skinjay diffusion systems where a scented pod emits a fragrance into the steam for an even more luxurious bathing experience.

When I arrived at my room, there was a bouquet of beautiful roses and peonies, a welcome letter, a complimentary bottle of French mineral water, and a box of chocolates from Maison du Chocolat waiting for me. Who can resist such a welcome?

There is a fitness center with a selection of Techno-gym equipment, a complimentary computer with a printer for guests to use, a complimentary laundry room with dry cleaning available for an extra charge, and an outdoor courtyard with seating.

I had breakfast in the Salons de Petit Dejeuner at the hotel’s lower level, which offers a full continental buffet with hot and cold selections including freshly baked croissants and pastries (would you expect anything less in Paris?). This is one of the most charming hotel breakfast rooms I’ve seen, with colorful, upholstered banquette seats and fashion drawing artworks on the walls. Breakfast is 35€ per adult and 12.5€ for children between 7 to 12 years old. Children 6 years and under don’t eat – just kidding, they eat for free.

On the ground floor, there’s the Liu Ling Bar and the Imperial Treasures restaurant for fine dining. One of the city’s top Chinese restaurants with a place in the Michelin Guide, it has two elegant dining rooms adorned with gold lacquered artwork featuring Chinese calligraphy. The cuisine offers refined specialties from Shanghai, their signature Peking Duck, as well as dim sum. There are degustation menus available as well – bring your expense account. 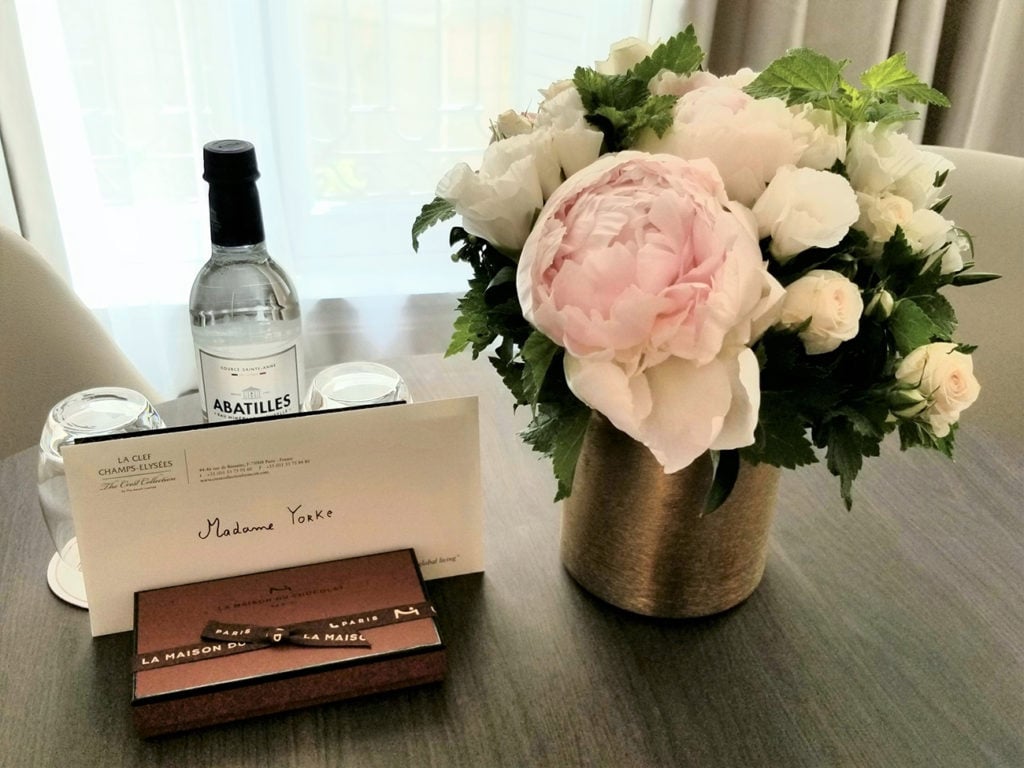 I stayed at the hotel during my birthday, and I was surprised to find the exceptional and thoughtful staff at my door serenading me with an excellent English and French rendition of ‘Happy Birthday,’ as well as presenting me with a music box from L’Occitaine, which played ‘La Vie En Rose.’ I can’t think of a perfect stay in Paris!

Wymara Resort & Villas, the most romantic resort in the Caribbean