Khloe Kardashian Reacts To ‘Bullying’ About Her Appearance – Hollywood Life

Khloe Kardashian revealed how ‘bullying’ about her appearance takes a toll on her ‘confidence’ while reacting an article that mocked her face.

Khloe Kardashian wants people to “realize” how articles mocking her appearance take a toll on her “confidence” and more. The 36-year-old Keeping Up with the Kardashians star has suffered years of cruel comments for experimenting with her beauty looks, which came to a head when an outlet posted a Snapchat article that read, “Another face of Khloe.” Attached were two side-by-side photos of Khloe: one was taken in 2021, and the other was a throwback photo from the 2007. TikTok user @mackincasey called out the outlet for suggesting that she has undergone major cosmetic work for comparing pictures taken 13 years apart.

“This is your cover story — this is what you decided to go with?,” the TikTok user asked in disgust, before adding, “They want to show a picture of her from over a decade ago…they’re going to post these pictures side-by-side and be like, ‘Uh, Khloe’s doing too much.’”

“You guys act like you haven’t watched Khloe do the exercises, eat right, etcetera,” the TikTok user continued, before later asking, “You realize she has body dysmorphia?”

The video was reposted on the Instagram fan account @kardashianvideo, and Khloe jumped into the comments section to share how she really felt about the article. “I don’t want anyone to kiss my a–. I’m not asking for that. But what I am asking for is for people to realize just what articles like this does to someone’s soul and confidence,” the Good American co-founder wrote. 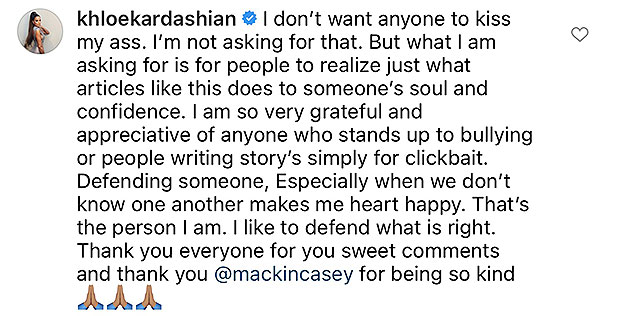 “I am so very grateful and appreciative of anyone who stands up to bullying or people writing story’s simply for clickbait,” True Thompson‘s mom continued. “Defending someone, Especially when we don’t know one another makes me heart happy. That’s the person I am. I like to defend what is right. Thank you everyone for you sweet comments and thank you @mackincasey for being so kind.”

Khloe is no stranger to plastic surgery speculation. The E! star has even joined in on the joke here and there — like the time she sarcastically told a fan that she looks different because of her “weekly face transplant” — but we learned that Khloe’s still “sensitive” to such unkind remarks.

“If you see Khloe in person, you see she doesn’t look massively different all of the time so she thinks it’s really ridiculous people pick her apart over photos. She uses several different apps and filters and has fun with the photos she takes and posts as do all of her sisters, so she doesn’t even think about it [using filters] when she posts,” source EXCLUSIVELY told HollywoodLife in June of 2020. The insider added, “She takes a ton of photos and spends time picking and posting the best one just like any other woman. Khloe isn’t one to just sit silent and let people talk about her or her loved ones which is why she speaks up. She’s sensitive so it does bother her slightly, but she also knows it’s not true. It’s a picture and people need to relax.”

Why She’s Not ‘Labeling’ It – Hollywood Life

The Making Of Tekashi 6ix9ine’ – Deadline

I Dare You To Play This Hot Guys Vs. Cats "Would You Rather"

How to Rock the Backless Dress Trend on Every Budget