Hurricane Katrina Wasn’t the First Storm to Use That Name, but It Was the Last

By the time Elsa—the first Atlantic hurricane of the season—blew into Florida this month, it had been downgraded to a tropical storm whose damage, compared with the most devastating cyclones in U.S. history, was slight. And because of that, its name might get reused.

The National Hurricane Center chooses Atlantic storm names from one of six rosters. Each has 21 names, and the lists rotate annually—so this year’s selection will recur in 2027, next year’s in 2028, and so on. There’s one exception: If a storm is especially destructive, its name will be retired. Since 1953, when the system was implemented, there have been 748 named Atlantic storms, including 419 hurricanes. Of that number, 93 have been retired.

Maria was dropped after it demolished Puerto Rico in 2017. Katrina was removed after decimating New Orleans in 2005. And Andrew was booted after pounding the Bahamas, Florida and Louisiana in 1992. All were Category 5 storms that caused enormous damage and death.

When their names were eliminated, they had been used no more than three times each, but other names have been used repeatedly over decades.

All remain in rotation, along with dozens of other names that have been used up to six times each.

There have been 748 named storms, including

419 hurricanes, since 1953, when the National Hurricane Center started naming storms in an organized, systematic fashion. 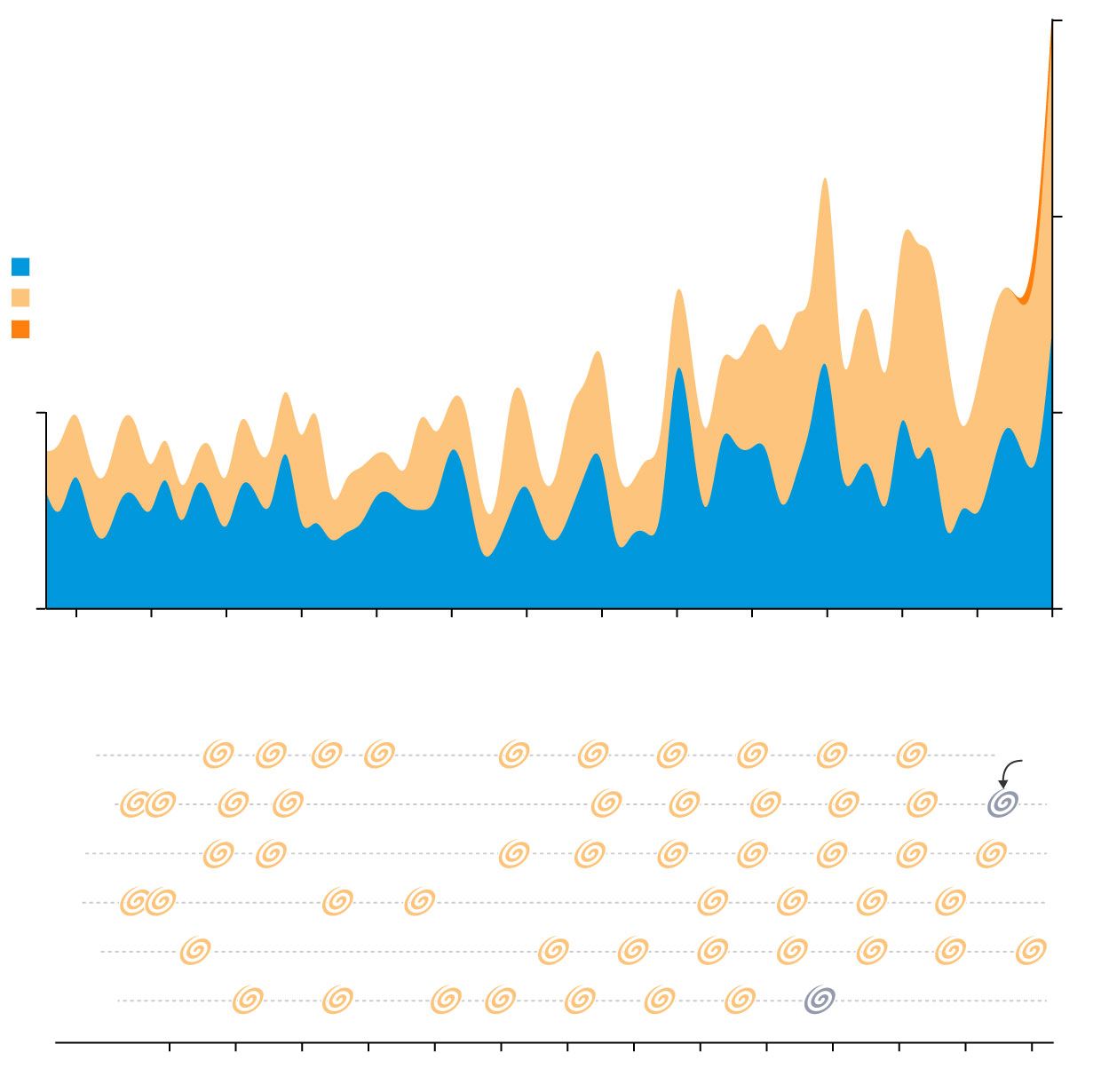 There have been 748 named storms, including

419 hurricanes, since 1953, when the National Hurricane Center started naming storms in an organized, systematic fashion. 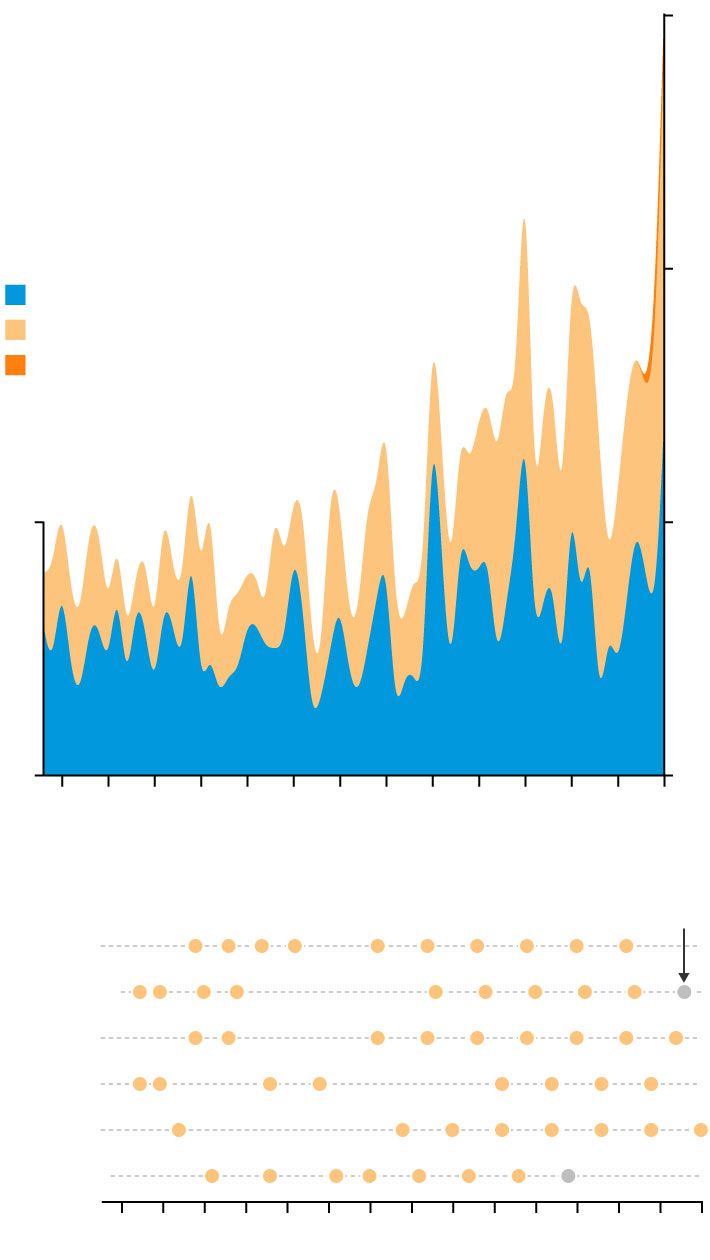 There have been 748 named storms,

when the National Hurricane Center

There have been 748 named storms,

when the National Hurricane Center

Only 39 names were used just once before being retired, including Irma in 2017, Joaquin in 2015 and Sandy in 2012. Elsa, a replacement for Erika, was used for the first time this year.

A tropical storm is named when its wind speed exceeds 39 miles an hour, according to Lixion Avila, a retired senior hurricane specialist at the National Hurricane Center. The names are meant to make it easier to discuss storms and communicate with the public.

Although the National Hurricane Center originated the naming convention, similar systems are used world-wide. The World Meteorological Organization Hurricane Committee, whose members include representatives from five regional tropical cyclone bodies, maintains and updates the lists (and will decide at its next annual meeting whether to retire Elsa).

In general, storms are named according to regional conventions.

In the Atlantic, names are assigned in alphabetical order. Those beginning with Q, U, X, Y and Z are omitted because in this region, they aren’t common enough, according to the WMO. Women’s and men’s names alternate (since 1979) and are of English, Spanish, Portuguese or French origin to reflect the languages of the area.

Which hurricanes stand out in your memory, and why? Join the conversation below.

In the Northern Indian Ocean, the options are gender-neutral (since 2000) and include names such as Naseem, according to the WMO.

“We hope the names are given or proposed with neutrality, particularly of religion, politics and culture,” said Taoyong Peng, a senior scientific officer with the WMO.

The WMO Hurricane Committee also tries to ensure the names are unique across regions.

The list lengths vary by area. The Atlantic rosters include 21 names because when they were originated, that was the largest number of storms the area had recorded in a single season, in 1933.

“The thinking was that was never going to happen again,” Dr. Avila said.

A personal, guided tour to the best scoops and stories every day in The Wall Street Journal.

When the names ran out, additional storms were tagged with letters from the Greek alphabet, causing a bewildering sequence in 2020, when storms named Zeta, Eta and Theta occurred within days of each other.

The similar-sounding words led to “messaging challenges rather than streamlined and clear communication,” said Dennis Feltgen, a spokesman for the National Hurricane Center.

In anticipation that the number of tropical storms will continue to exceed the number of approved names, the Greek letters were replaced in March with lists of supplemental names. The Atlantic version begins with Adria, Braylen, Caridad and Deshawn.

Although the convention is useful, the formula takes names out of the mix that were once assigned with a wink—when a storm might be named for a lover or a relative.

“When we sent hurricane hunter planes to find systems, they would give them the name of a girlfriend or whatever,” Dr. Avila said. “It was not very organized.”

“In 1995, there was a hurricane named Luis,” he recalled. “It was a very powerful one, and some members wanted to retire the name. Many people said why not call the next one Lixion? But the director said no. It’s too obvious.”

It turns out naming hurricanes isn’t as easy as A-B-C. Especially when their numbers far exceed 1-2-3.