Hundreds Gather To Demand Justice For Breonna Taylor One Year After Her Death : NPR

Tamika Palmer, center, the mother of Breonna Taylor, leads a march through the streets of downtown Louisville on the one year anniversary of Taylor’s death on Saturday. 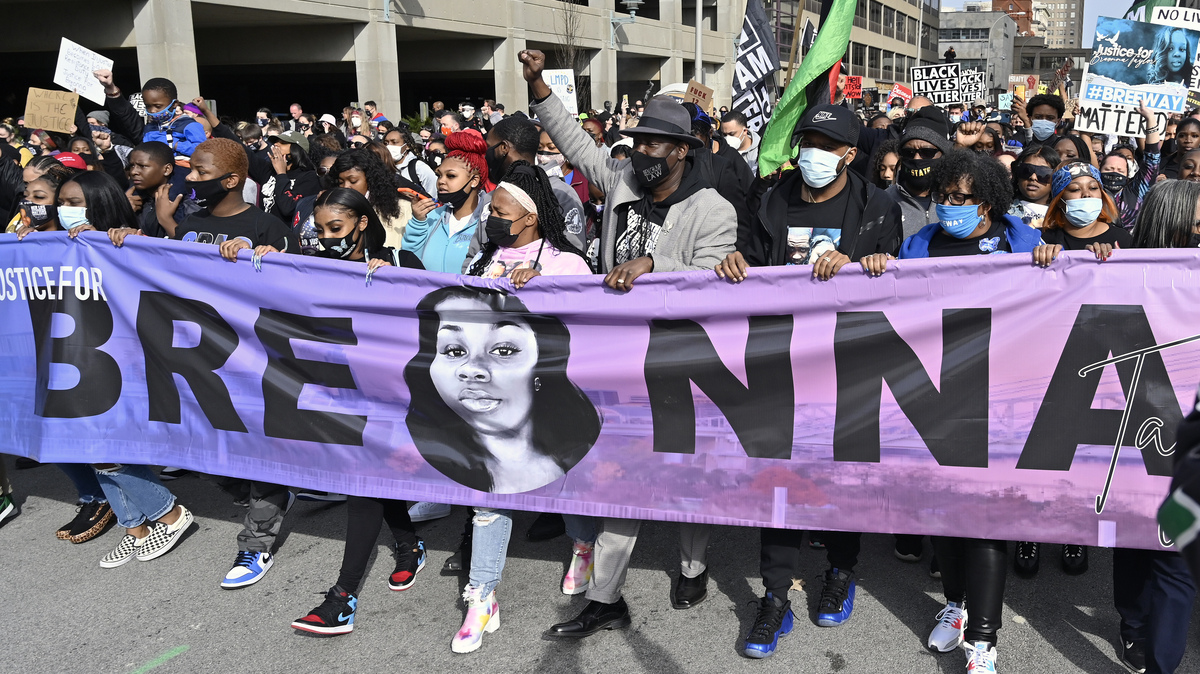 Tamika Palmer, center, the mother of Breonna Taylor, leads a march through the streets of downtown Louisville on the one year anniversary of Taylor’s death on Saturday.

Hundreds of demonstrators gathered in downtown Louisville Saturday to mark the anniversary of the death of Breonna Taylor, a 26-year-old Black woman who was killed by police officers at her apartment one year ago.

Taylor, whose name has become a rallying cry in the movement for racial justice, was killed in a narcotics raid on March 13 of last year when Louisville Metro Police Department officers forced their way into her home. She was not the target of the raid.

On Saturday, activists and supporters joined Taylor’s family in a rally at Jefferson Square Park — the heart of many of Louisville’s protests over the last year — to remember her life and demand further justice.

Those demands included calls on state and local officials to hold Louisville police officers accountable for Taylor’s death. None of the officers who fired their weapons in the raid have faced criminal charges for Taylor’s killing.

The city settled a wrongful death lawsuit with Taylor’s family in September for $12 million. The settlement included a series of police reforms. Louisville had earlier also banned no-knock warrants.

“We’ve made significant reforms in policies & priorities, but we recognize it’s not nearly enough,” said Greg Fischer, the mayor of Louisville, in a tweet Saturday morning. “We have a good deal of work ahead of us on our commitment to move from tragedy to transformation.”

Kenneth Walker, Taylor’s boyfriend, thanked the crowd Saturday for their support over the last year. Walker was charged with assault and attempted murder of a police officer after he shot an officer in the leg during the raid, but a Kentucky judge earlier this week dropped the charges for good. 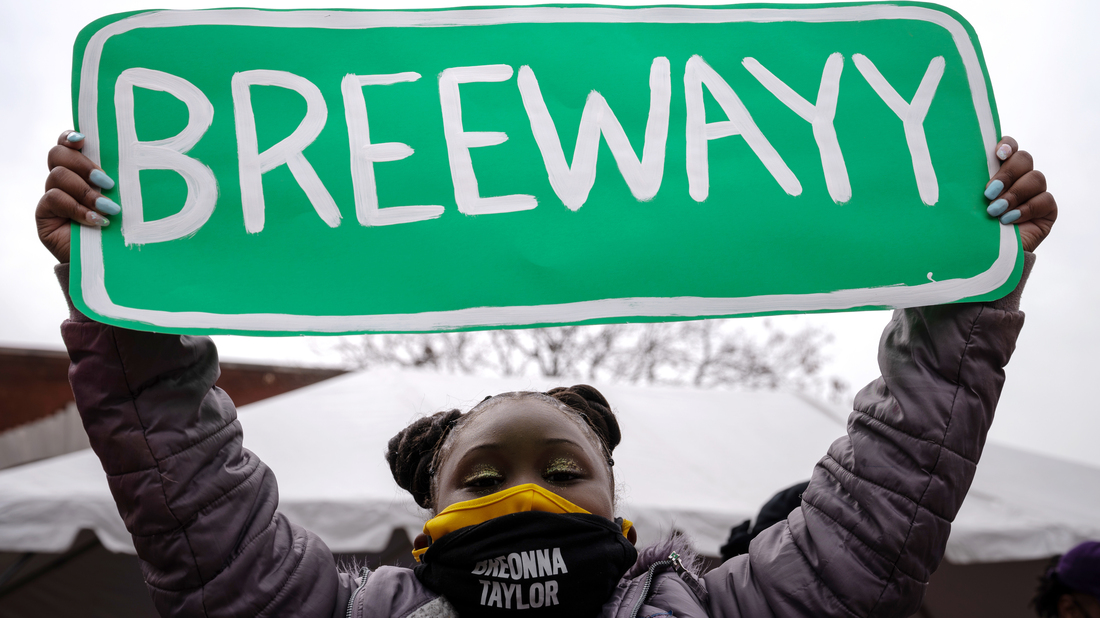 A child holds a sign that says “BREEWAYY” at Jefferson Square Park on Saturday. BREEWAYY is what protesters have coined the park since demonstrations began last May. 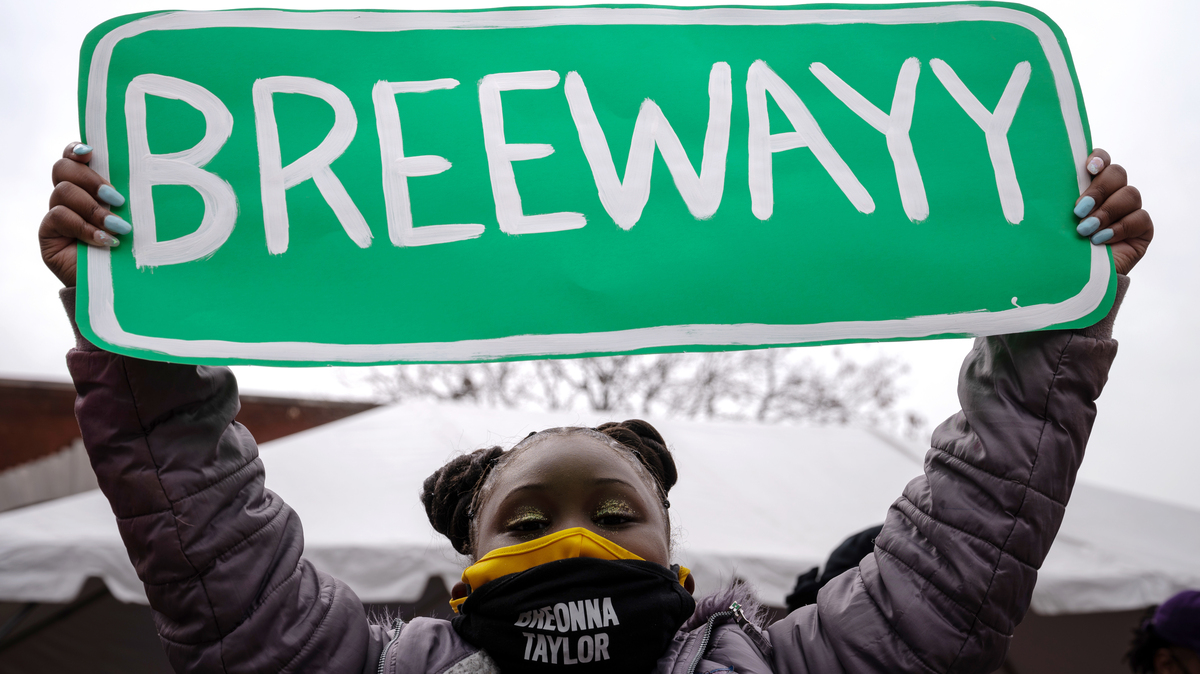 A child holds a sign that says “BREEWAYY” at Jefferson Square Park on Saturday. BREEWAYY is what protesters have coined the park since demonstrations began last May.

Tamika Palmer and Bianca Austin, Taylor’s mother and aunt, were also present at the rally. Following speeches and performances honoring Taylor’s life, they led hundreds of demonstrators in a march down Jefferson Street, often chanting her name.

Ben Crump, the Taylor family’s lawyer, said family of George Floyd, an unarmed Black man who was killed by police in Minneapolis last spring, were also on their way to Louisville to support Palmer — though he said their flight was delayed.

Palmer did not speak publicly at the rally, but she told NPR member station WFPL in Louisville Friday that “there’s been no justice” for her daughter’s death.

“There’s no police accountability, so it’ll be another time next year that we’ll be back in the same position,” she said in the interview.

Some speakers Saturday also criticized a bill going through the Kentucky state legislature that would make it a crime to insult or taunt police officers.

That bill comes after protests in Louisville and across the country last year erupted in the wake of the deaths of Taylor, Floyd and other Black Americans killed by police.

Sadiqa Reynolds, president and CEO of the Louisville Urban League, called the legislation “the shut the hell up and take it bill.” She told the crowd at Jefferson Square Park that the gathering was about “justice.”

“This is a movement,” Reynolds said. “We are standing in Louisville, but across the country people are standing.”

Ahead of the weekend’s demonstrations, city officials blocked off several of the main roads downtown with trucks and concrete barricades. As of Saturday evening, no major clashes had taken places between marchers and law enforcement present at the events.

Protests and events commemorating the anniversary of Taylor’s death were also held Saturday in cities across the country, including New York, Atlanta and Los Angeles.

Louisiana ranks as the worst state for children during the Covid-19 pandemic, Save the Children says