How a PLB saved my life when I was knocked overboard

‘How a PLB saved my life when I was knocked overboard’

After my wife died from cancer, my life imploded so all I wanted was to get away from home, from our life, to heal.

Once I had sorted out all of the paperwork, her funeral, the will, it was time to sail away.

I found my floating home not too far away at Philip Island; a Duncanson 34 called Bison, and brought her back to Queenscliff, then set about starting a new chapter, with my elderly cat Stinky.

After a rather adventurous voyage along the bottom of Australia then up the east coast, crossing every nasty bar, entering some dubious anchorages and some quite stunning places, I experienced the crazy tides of the Torres Strait, and finally ended up in Darwin. 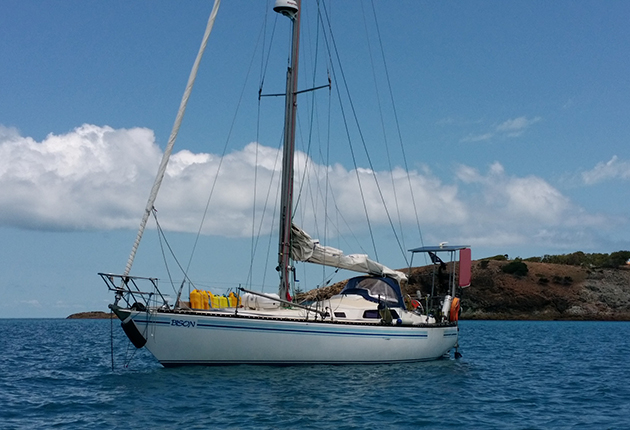 I planned to get my paperwork sorted to sail to Indonesia with a view to living in Asia while my heart healed from it’s somewhat smashed remnants.

But then the Covid pandemic hit the planet, taking with it my chance to sail overseas.

Due to the persistent trade winds I was stuck in Darwin until the following cyclone season, when for a few months the trade winds reverse.

I knew the conditions would be pretty disgusting, but with 24-hour weather-monitoring via satellite, I felt confident that I could make the voyage safely, and it would save me travelling an extra 15,000 miles to go counterclockwise. 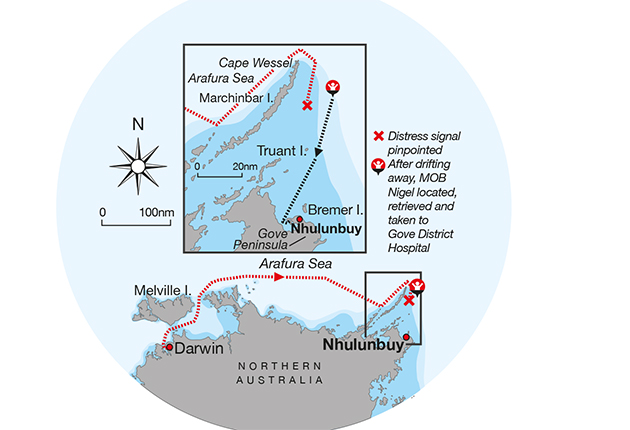 If I couldn’t go to Asia, I wanted to hang around the Great Barrier Reef.

Stinky and I departed on 30 December 2020, bound for Cairns; the cat was cross with me and seasick.

Fastforward to five days into the trip and conditions were disgustingly bad. We were in the back end of beyond – I’d only seen one ship in the last 400 miles.

The previous night we had encountered an electrical storm, and I’d broken two ribs – I’m not exactly sure how.

It was morning and we were nearing the Gove Peninsula, when yet another squall struck.

The furler jammed and the port-side jib sheet managed to tie itself in a knot around the stainless steel wires – I have never seen a sheet do this before.

Just to add to the danger, it was on the lee side of the yacht. I started the motor, adjusted the autopilot course and disengaged the hydrovane. 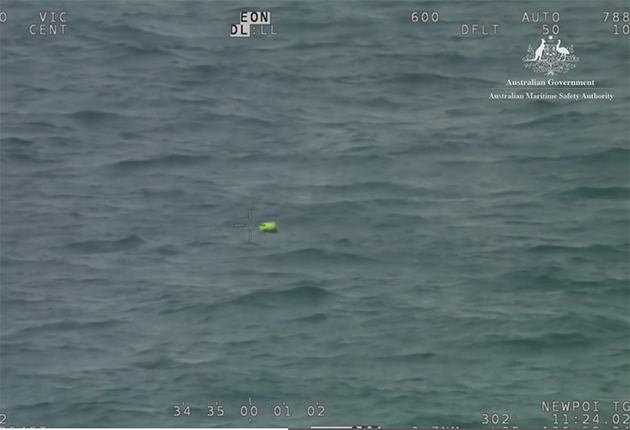 With large waves and the aircraft flying at speed, Nigel would have been hard to find without his PLB. Credit: AMSA

It was blowing 30mph winds, with two metre swells running in some weird double set pattern.

I was wearing my lifejacket, a hook knife, handheld VHF on a lanyard, and had a jackline attached when I stepped out of the cockpit.

One wave hit, which wasn’t a problem, but then a second struck and pitched the yacht on its beam ends, flipping me over the side.

Within seconds I went from a stable footing to looking at the yacht from the wrong side of the stanchions.

The jackline wrapped itself around one leg while the end tethered to the lifejacket tautened, leaving me hanging like a piece of washing, almost horizontal, off the side of the boat.

My head and shoulders were being driven underwater every time the yacht went through a wave.

As far as I’m concerned safety lines are the work of the devil. They’re just out there to kill you.

If I hadn’t been able to cut loose, I would have drowned. 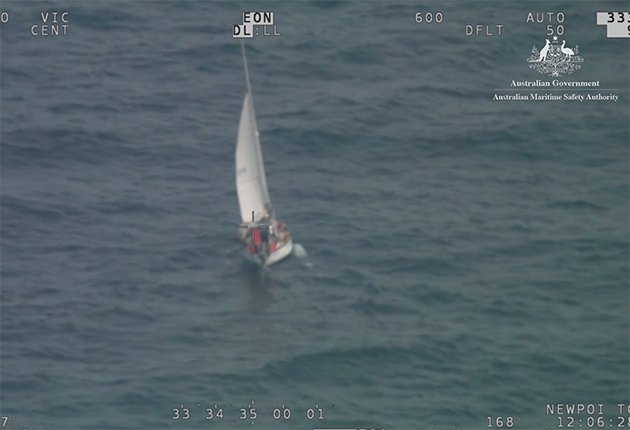 The runaway yacht, with Stinky the cat on board. Credit: AMSA

My Spinlock Deckvest lifejacket has a hook knife built in, but it’s pretty small.

The hook knife I always carry has got a nice big handle, so it was easy to find it and cut the line.

I managed to toss the knife back into the cockpit as I dropped into the sea.

In the water, I grabbed onto the hydrovane.

My VHF radio was torn off my lifejacket; I think the lanyard had snagged on the hydrovane rudder’s safety line.

The boat’s stern was rearing up down in the waves.

I was psyching myself up to make the climb when my lifejacket self-inflated, and the drag pulled me off the boat.

Quite a few expletives came out but I was also operating on pure instinct: pull the lifejacket hood on, get the personal locator beacon (PLB) out of its pouch, push the button for more than one second – that fires up the blinky light.

I’d lost my glasses and could not see properly, but I knew what to do.

The PLB doesn’t float so after looking at it for a while, I had a brainwave and wove the antenna through a ventilation slot in the lifejacket hood – locking it in place. Perfect.

The antenna was in clear air and out of my hands. I didn’t want to drop the bloody thing.

The yacht carried on its merry way, while the current took me southeast at 2.5knots.

I adjusted the lifejacket leg straps, which resulted in turning my body to face the waves. 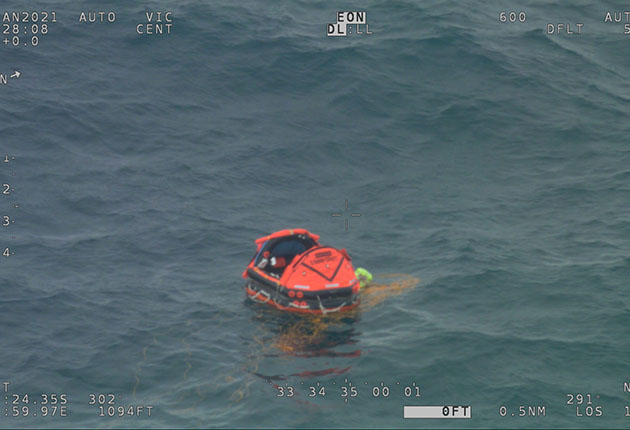 The AMSA liferaft is dropped to Nigel Fox. Credit: AMSA

By skulling and keeping the back of my head to the waves, water still entered the hood – from the side of the neck – but without a doubt, that lifejacket hood saved me from secondary drowning.

I was trying to minimise splashing as the Arafura Sea is pretty thick with tiger sharks. They grow to five or six metres and are aggressive.

I’m really pleased it was daytime as they are night hunters.

There are also Irukandji and box jellyfish, plus saltwater crocodiles in those waters.

At 31º, it was like being in a warm bath. I was in the water for about five hours, then in the liferaft for maybe two more, although I couldn’t say for sure.

The SAR aircraft honed straight in on me thanks to the little OceanSignal rescueMe PLB1, which has a lot of technology packed into something that is little bigger than a matchbox.

It’s got the 406MHz Cospas distress frequency, plus a 121.5MHz homing frequency.

The Cobham Aviation guys told me that on their infrared camera I was a single pixel on the screen, sometimes disappearing behind waves.

The raft, once deployed, landed what looked to be quite a swim away, but then a line came streaming out the back of the aircraft and landed within two metres from me.

It took me a while to climb aboard; I was tired from hauling myself to the liferaft.

In the raft’s vinyl pockets, I found a VHF radio and called up the pilot to say I was OK.

I found water, and then looked for food. 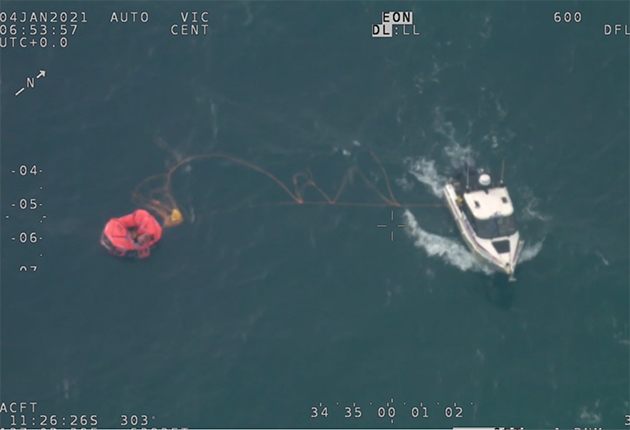 I’m a diabetic and I hadn’t had breakfast, or any insulin since the night before; I had the munchies. I couldn’t see without my glasses so I just cracked open packages. I tried one and thought ‘Nope that’s disgusting, not food’.

I chucked that to one side but fluorescent yellow sea dye now coated my fingernails, toenails, shirt, and mouth.

When the water police arrived in a speedboat, I looked like a horror movie killer.

They said: ‘Mate, what have you been eating? You have a yellow grin.’

My 16-year-old cat, Stinky, is the one thing left in my life I absolutely love to bits.

By the time Bison was retrieved, Stinky had been on her own for 30-plus hours and the boat had got quite battered. 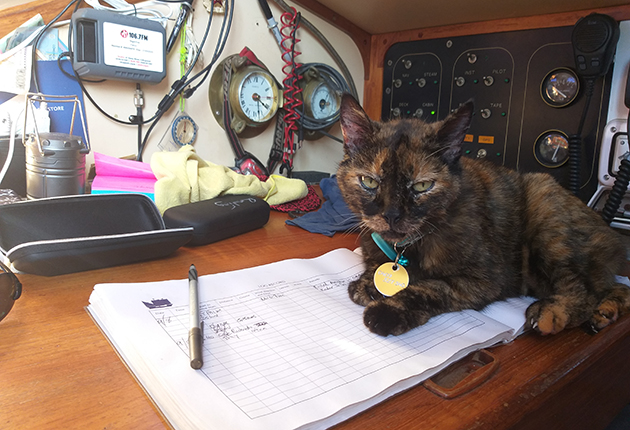 Everything was on the floor and Stinky wasn’t particularly happy.

Thanks to Iridium Go satellite tracking, set to record position, heading and speed every 30 minutes, my friends were able to locate my boat, and got a ride straight to it.

They cleared a path to Stinky, fed her, and by the time Bison was back at anchor, she was her old self again.

It is registered as a PLB (my primary EPIRB is a separate listing), so the authorities knew immediately that I was in the water. 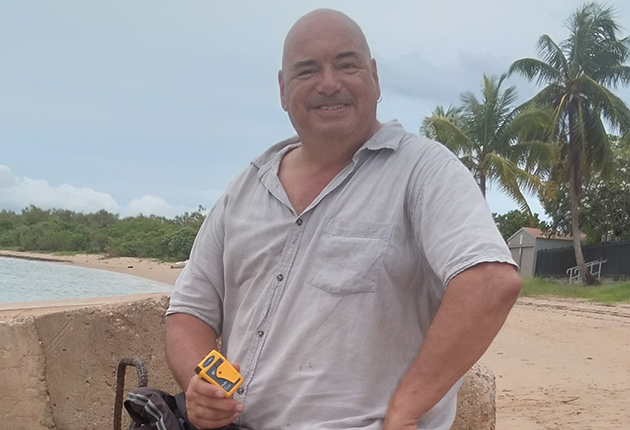 Nigel Fox is a former news cameraman who grew up in Southampton, UK, learning to sail on the Rivers Itchen and Test. The 55-year-old sailor is a liveboard on his Duncanson 34, Bison, with his cat, Stinky. Widower Nigel set sail after losing his wife to cancer in 2016. He has lived in Australia for 27 years.

First they tried the sat phone – no answer obviously – so the alarm was raised and everything put into action.

I would also say to everyone, please, please carry a PLB.

It is the cheapest, most effective life insurance you can buy after a quality lifejacket.

You either go in prepared or become a statistic. Staying positive was also important.

Although when it started raining, I looked up at the sky and said ‘Aren’t I having a tough enough day as it is?’

I’m so grateful it was a daytime rescue, being out there at night would have made it a lot scarier and probably fatal.

Saved by a PLB: Precision required

The beacon alert from Nigel’s PLB was received by the Australian Maritime Safety Authority (AMSA), who pinpointed the distress signal 93km northeast from the remote town of Nhulunbuy in the Northern Territory.

AMSA tasked its Cairns-based Search and Rescue (SAR) aircraft at around 0930 on 4 January to find the 55-year-old, who was located 23km (14 miles) from his yacht, in the Arafura Sea.

Thanks to Nigel’s 121.5 MHz homing signal, and the skilled air crew aboard the Cobham Aviation Challenger jet, a liferaft was dropped just a couple of metres from the sailor in the water. 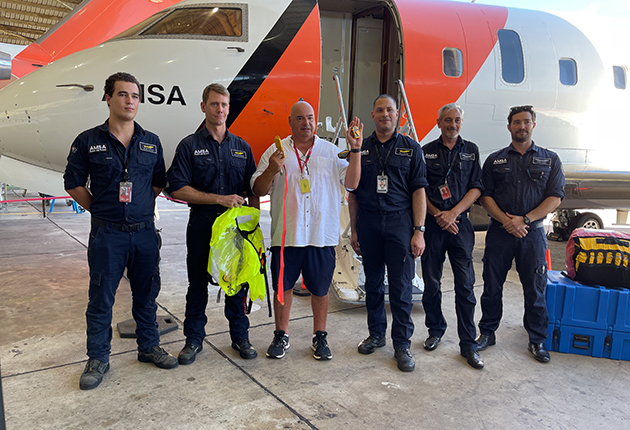 A couple of hours later he was retrieved from the sea by Nhulunbuy water police, who transported him to Gove District Hospital suffering from exhaustion and dehydration, as well as two broken ribs from the previous stormy night.

Nigel’s yacht was retrieved by friends in Nhulunbuy about 30 hours later.

Liferafts being deployed from an aircraft, to a person in the water, do not happen regularly for the AMSA crew.

Aircraft Mission Coordinator Ollie Marin, who was on-board that day, said: ‘Most people wouldn’t know about the level of precision required to drop a liferaft from a jet aircraft travelling at 200ft, 330km per hour to a single person in the sea. 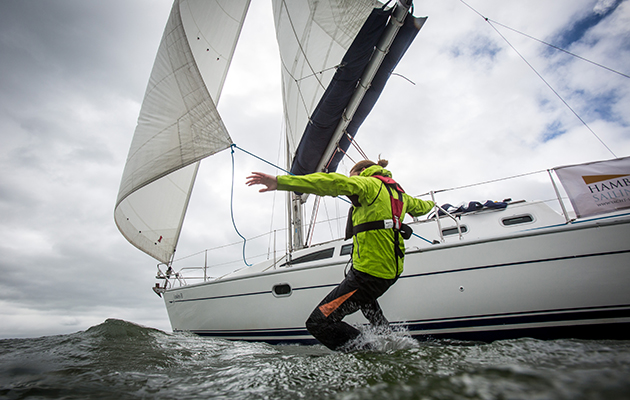 The YM team get wet to see how well the MOB process works for shorthanded sailing. Here are our findings… 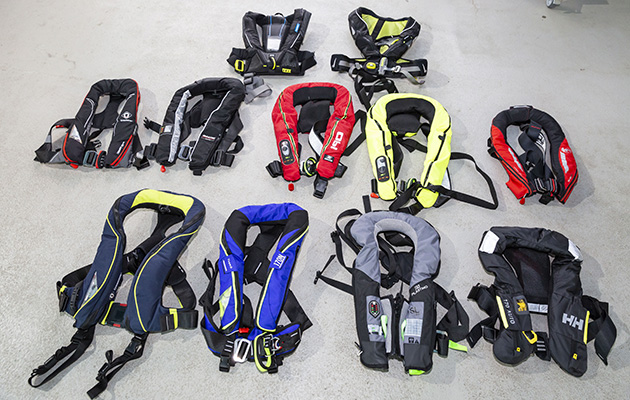 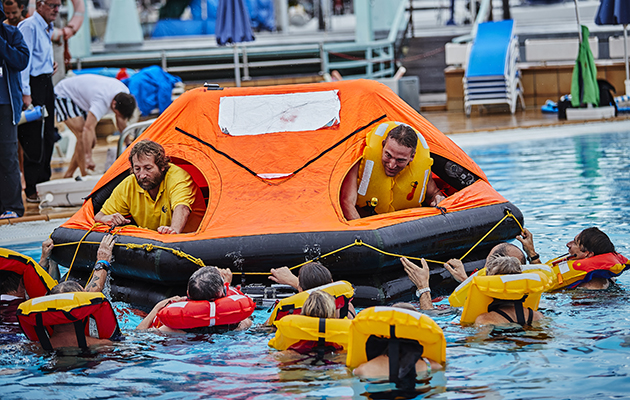 It is easy to buy the cheapest liferaft and then forget about it, but do you know how to use… 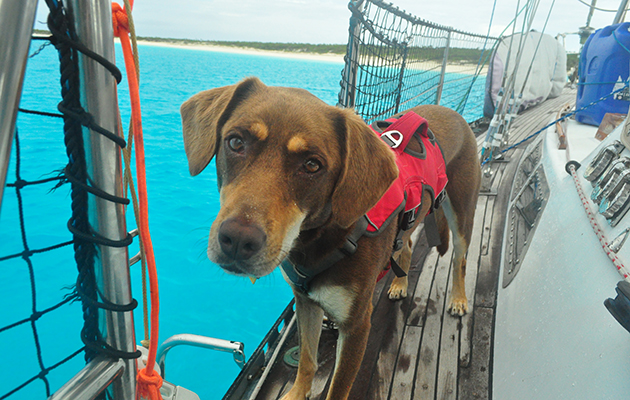 Australia has one of the most sophisticated civil search-and-rescue capabilities in the world.

Four highly modified AMSA Challenger jets are based at strategic locations across the country, where they assist in covering a search and rescue region that is approximately one tenth of the size of the earth’s surface.

Ollie added: ‘It’s thanks to the technology on board the aircraft and our highly skilled crews, that we were able to successfully drop the life raft to Nigel that day.’

What You Need to Know About Your Body’s Natural Defense

Ryan Saghian, Earning His Stripes In The World of Interior Design