When I first reviewed Peter Willis’ biography of Arthur Ransome’s Nancy Blackett on its publication in 2017, I had enjoyed it far more than I’d necessarily expected.

Nancy Blackett is a yacht I feel I know well as she’s a close friend of my own Peter Duck. 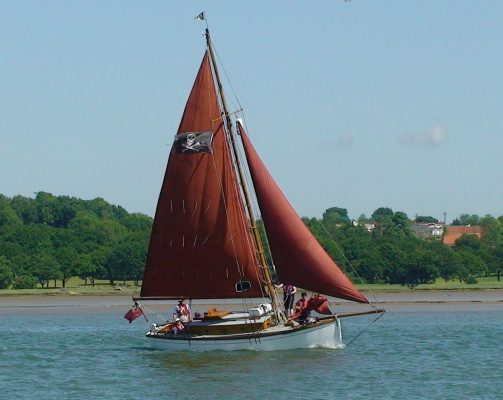 PD and I have attended several of her AGMs and other events together and I wasn’t certain that Good Little Ship would tell me anything I didn’t already know.

Or perhaps I thought it might overstate Nancy’s virtue and significance.

I was wrong on both counts: the pleasure of a well-written, well-organised sailing book (which this is) is to bring a knowledge into a clearer perspective, to articulate half-remembered fragments and arrange them into a new whole – thus making the case, without fuss, for the value of the subject.

I was immediately impressed by the way in which Peter Willis brings together different aspects of the Nancy story.

First there is the yacht herself, the artefact: built in Littlehampton in 1931 then passing through two ownerships and two names before being purchased by Ransome in 1935 and promptly renamed once again.

Renamed not once but twice, as she soon commenced her parallel existence as Goblin, heroine of We Didn’t Mean To Go to Sea and expedition ship in Ransome’s 1939 novel Secret Water.

Her independent biography continued after Ransome, always fickle, sold her for Selina King in 1939.

Nancy became part of other families’ lives, other existences, until she fell on hard times and was rescued again not once but twice; first by Mike Rines who brought her back from the grave, and then by Willis’ Nancy Blackett Trust which owns and cherishes her to this day.

Her fictional existence as Goblin has been considerably less problematic as she has sailed her way into readers’ imaginations and affections, whether within the pages of the novel, the audiobook or dramatisations.

Willis is not overstating when he calls her one of the best-loved little ships in Britain.

The Nancy Blackett Trust can take much of the credit for that.

He tells their story in such a way as to offer new understanding of the extent to which this wooden artefact has become a vessel for peoples’ dreams.

He manages this not least by noting Nancy’s life-changing effect on his own life.

Good Little Ship includes perceptive but unpretentious discussions of the novel. Describing it as a biography feels reductive – it’s many life-narratives in one.

My rereading sparks renewed admiration for Willis’ craftmanship at bringing his stories together without being conceited or dull.

This is a good little book. 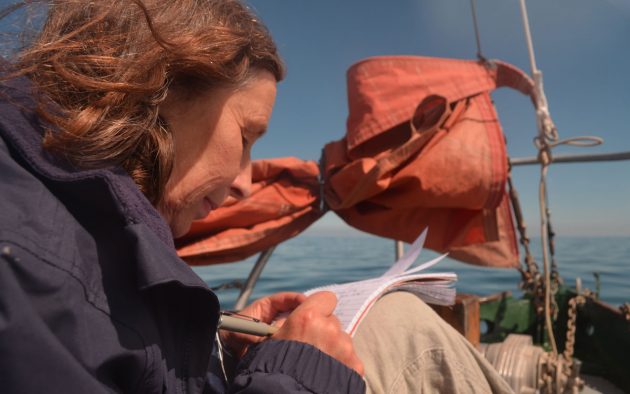 Arthur Ransome liked to set his stories in locations he knew and loved.

Between 1930 and 1936 he published four books (Swallows and Amazons, Swallowdale, Winter Holiday and Pigeon Post) set in the Lakes, where he then lived.

Another (Coot Club) was set on the Norfolk Broads, where he would occasionally hire a yacht.

In that book the locations are entirely real – not rearranged and disguised as in the Lakes books.

He’d also written a fantastical yarn (Peter Duck) set in the Caribbean – though it began, prosaically enough, in Lowestoft.

By 1935, Ransome hankered after doing some sea-sailing and persuaded his wife Evgenia that they should move to the East Coast.

They discovered the Shotley peninsula, between the rivers Orwell and Stour, though in the end they rented a house at Levington, on the other side of the Orwell, just across, and down a bit, from Pin Mill.

At that time he was just finishing the proof-correcting and illustrations for Pigeon Post, his sixth book, and worrying that he was running out of ideas.

He had no idea where his next plot was going to come from, but his main concern at that stage was to start the offshore sailing which had inspired the move, and that meant finding a boat.

The boat he eventually bought was to solve both these problems, as well as providing the role model for the Goblin.

She was a Hillyard seven-tonner, 28ft 6in long, about five years old, lying in Poole Harbour and at that stage named Electron.

Ransome bought her on the spot and promptly rechristened her Nancy Blackett after his favourite character—‘but for Nancy, I would never have been able to buy her,’ he said.

A young crewman, Peter Tisbury, was engaged, ‘strong enough to do the heavy work of pulling and hauling, and young enough not to want to take a share in the navigation to which, after 10 years away from the sea, I was most eagerly looking forward,’—and they set about sailing her back to the Orwell.

The delivery voyage, which immediately ran into a full gale, proved a great deal more eventful and exciting than someone who had done no offshore sailing for a decade or more might have wished.

‘We started out from Poole on September 14, just as the famous gale began,’ he wrote in a letter.

‘We got to Yarmouth, Isle of Wight, where we learnt that the lifeboat had been warned to be ready by the coastguards at the Needles who had observed our approach…

‘Sunday we lay quiet in Yarmouth. Monday we bussed into Cowes to get a storm jib made as we had none.

‘That night… came the climax of the gale, of which you no doubt read in the newspapers.

‘In Yarmouth two boats were flung on the breakwater, seven or eight sunk, one man was drowned and the lifeboat was out three times during the night inside the harbour.

‘I nearly lost the boat on the first day, mistakenly meeting all the force of the ebb out by the Needles and, in the wild weather, as nearly as possible being swept on the Shingles.

‘However, we evaded them, found our way through by Hurst Castle and came to Yarmouth…

‘I knew by that time that I had got a very good boat.’

Or as he put it in his log: ‘Consider the boat pretty good and the engine a real beauty.

‘But I must say I hope the next passage will be more like ‘yachting’.’

After popping up to London for a couple of days to sign the lease on his new home at Broke Farm in Levington Ransome returned, had the dinghy repaired – for 5 shillings – and moved Nancy to Haslar Creek in Portsmouth Harbour, where his cousin Godfrey Ransome, who was in the Navy, visited the new boat.

They sailed again on the 23rd, pausing at Newhaven for a nap, then on again… ‘cleared Beachy Head, passed by the Royal Sovereign Light Vessel and were presently going like a train past Dungeness, reaching Dover at 10 minutes past two in the afternoon, very wet and very cold and glad to get hot baths and a real dinner at the Lord Warden. Again the gales blew up…’

After a day in Dover they left for Ramsgate, ‘with a promise, not kept, of easy weather’.

They decided to skip Ramsgate and carried on, under trysail and in rain and wind.

The boat’s electrics failed, and Ransome describes them as ‘Bucketing along in the dark, and able to see the compass only by occasional flashes of the torch.’

In his letter to the Gnosspelius family, dated 1 October, c/o the Butt and Oyster, Pin Mill, Ipswich, he also mentions, how, on ‘that last wild night… the miserable navigation lights… blew out always the moment we showed them.

‘I used a red Woolworth bakelite plate with a strong torch behind it, to frighten off the Flushing Harwich steamer !!!’

He sums up: ‘So here she is, and after ten years with none, I’ve had a little ‘yachting’.

It made me feel horribly old but in a way very young and inexperienced.’

In those last few words we can sense the seeds of the theme of We Didn’t Mean to Go to Sea already forming in his mind.

Peter Willis learned to sail on the Broads.

He’s a former deputy editor of Classic Boat and inaugurated the appeal which resulted in the purchase and preservation of Nancy Blackett.

Cruising in Europe: How to cope with Covid and Brexit issues

Useful Tips for Planning a Trip to Scotland