Pete John recalls bringing his Nicholson 35 from Hamble to Argyll, with strong winds, a rope around the prop, genoa furling line failure and an escort by the Campbeltown lifeboat

Having moved from Wiltshire to Scotland in October 2012 we found the temperature change challenging. that cold winter.

Fastforward to a glorious May and it was time to bring our Nicholson 35, Affinity, from the Hamble to Argyll.

I had sailed with Mike on Maybird, a 1937 Fred Shepherd ketch, for some years, including the 2011 Fastnet race, so I knew I was on to a good thing when he agreed to help with the trip.

My wife Gill, Mike, his brother-in-law, Rob and I set off on 2 May, bound for Dartmouth.

Initial light winds meant motoring before tacking in a westerly Force 4-5, arriving at Darthaven Marina in the wee hours the following day. 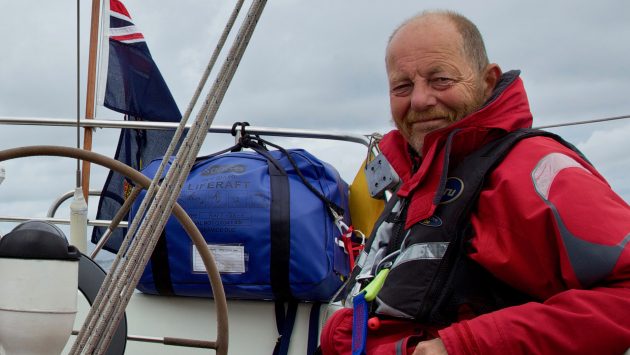 Pete John joined the RAF, aged 19, then British Airways, aged 23. His sailing was sporadic due to weekend Air Display flying in Spitfire and Mustang. His sailing then took over, in Maybird followed by Affinity, then a Nordship 39DS TimeOut, which he sailed home from Denmark. Credit: Pete John

Being an ex-Royal Navy Sea Vixen pilot, Mike proceeded to jump ship and attend a reunion, at Britannia Royal Naval College, with a promise to return.

Mercifully, he survived the surfeit of Horses Necks – brandy and ginger ale – and we set sail on the Sunday afternoon.

By this time, Gill had returned home and our daughter Holly had taken her place. Rob had returned with Mike so we were back up to four crew.

The wind was generally from the west or south-west 5-10 knots, and with a slight sea state we motored for much of the journey past Start Point, Prawle Point, The Lizard and, abeam Longships Lighthouse.

The 10-knot wind then backed to east-south-east to give us some fine sailing.

By early Tuesday we were passing Grassholm and Skomer Islands, off Pembrokeshire, motor sailing off and on; the only noteworthy event being on watch in when a dolphin blew alongside.

At midnight we were having a grand time in 15 knots from the east, which then became a more exciting 25 knots as we rounded Stack Rocks on Anglesey.

This increased to gusting 40 knots as we approached Holyhead Harbour, at 0415.

We found the pontoon and moored up with plenty of fenders to cope with the wind blowing us on. Despite being bounced around, sleep was no problem. 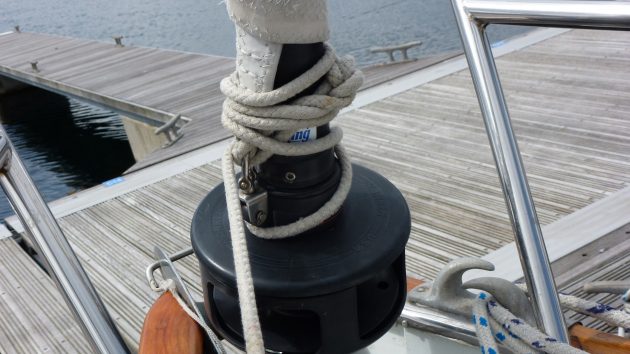 The following day we moved Affinity to a more suitable berth and the crew jumped ship – my most excellent crew, Rob and Holly returned home, and Mike left to attend yet another cocktail party in London.

I spent the next five days in Holyhead, where the wind was a steady 25 knots, cleaning and fettling until Mike returned on 13 May.

Twelve hours later we shook out the reefs. 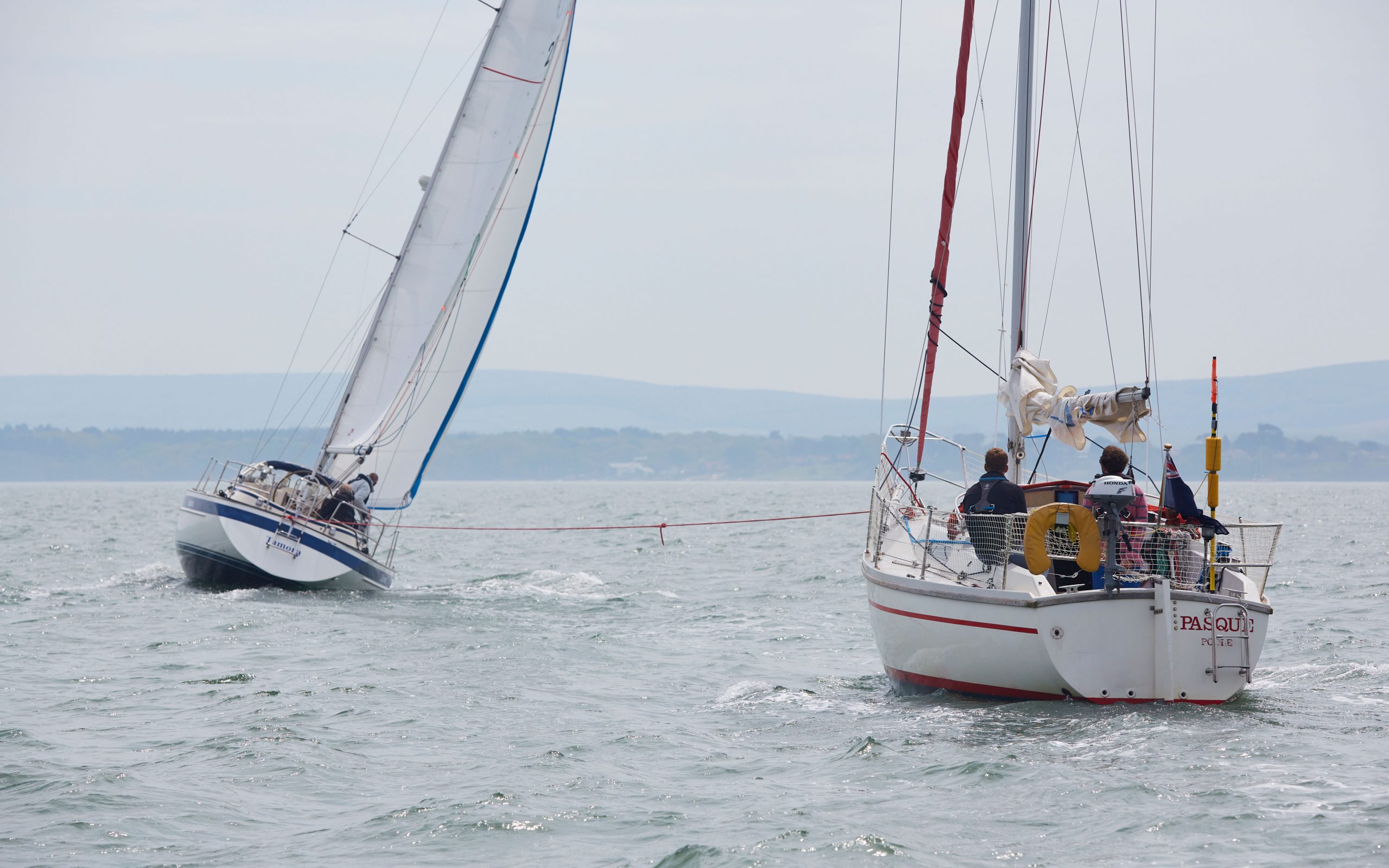 When a boat needs towing, cruising yachts are often among the first on the scene. James Stevens explains how to… 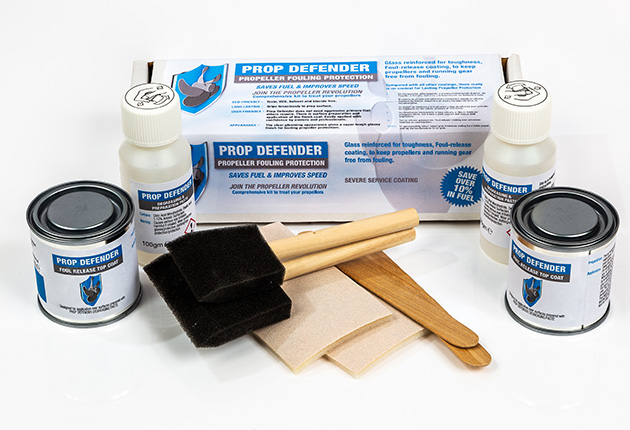 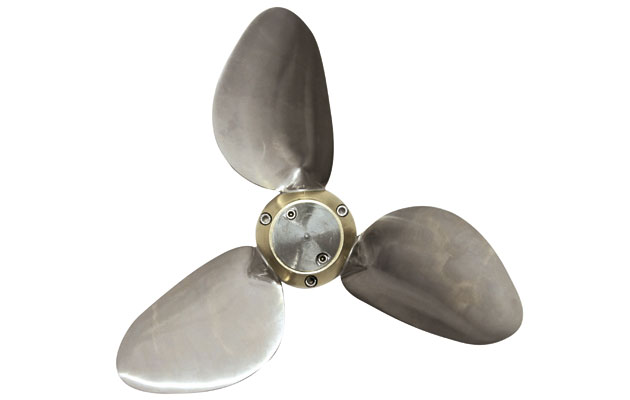 Which is the best folding or feathering prop for your boat? Emrhys Barrell compares 15 propellers for speed, thrust, drag,… 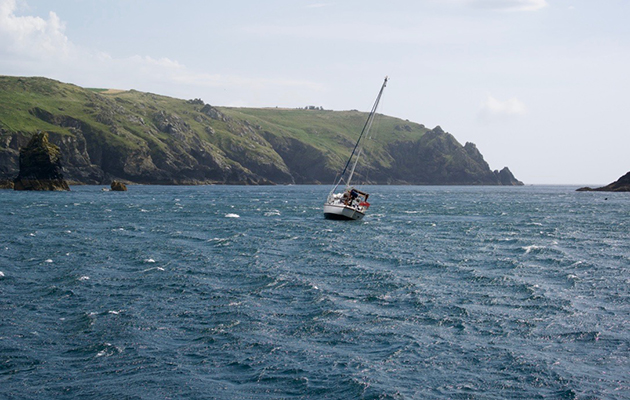 Ingmar Hupp encounters fog, a fouled anchor  and a 44-knot wakeup call, all while attempting  to adapt to rapidly changing…

With Ailsa Craig in sight, the wind moved onto the nose and the main was thrashing so we decided to take it down.

I went forward, undid the halyard and started to lower.

Out of the corner of my eye, I saw the halyard go overboard and thought, with the main half lowered, ‘there’s no way it’ll reach the pro…….p!’ It did and I called to Mike to go into neutral.

I was able to recover some of the halyard and, thus emboldened, asked Mike to blip her into reverse. Half a blip too much and the halyard was now stuck. We had a fouled prop. 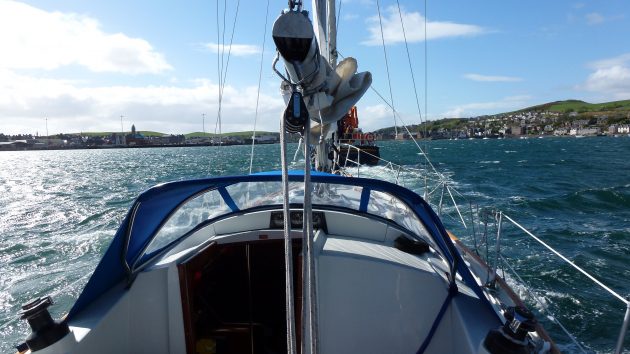 After a discussion, I decided we could come off the wind and sail to Troon. We informed Belfast Coastguard of the situation but said we did not need assistance.

They asked us to check in every hour. A short while later, the more diligent Mike pointed out the pilot book warning that a strong north-westerly produces a swell at Troon entrance, which might prove too exciting.

He suggested hoisting sail and making for Campbeltown, our original destination.

One of the advantages of airline flying is that you learn about cockpit resource management, which translates into: a skipper should consider suggestions from crew and then make the decision.

It was not difficult to defer to Mike’s experienced analysis.

So, hoist sail we did, informed Belfast Coastguard, and continued towards Campbeltown.

It was a long, uncomfortable beat to windward but we ate hot food and took turns to rest.

About 15 miles from the harbour, Belfast Coastguard advised that the lifeboat was going to attend anyway. Plan A, was to sail into the relative calm of Campbeltown Loch, anchor on the north shore and sort it all out the following day.

We reiterated that we were not an emergency, which they acknowledged, but said RNLI Campbeltown would prefer to come out. Five miles from the entrance the genoa furling line broke.

The din created by a full, flapping genoa, in 30-35 knots is quite something and further breakages seemed imminent. 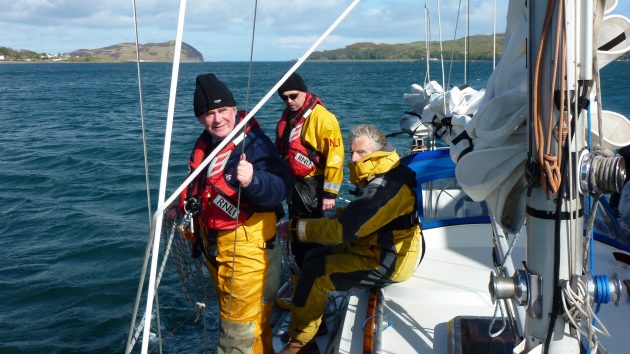 John is indebted to the Campbeltown lifeboat crew after their experience with a fouled prop and a broken genoa furling line. Credit: Pete John

With Mike on the helm, I went forward, tied a length of rope to the tail of the furling line and threaded it round and round the furling drum; not easy on a bouncy foredeck but, with Mike’s expert helming keeping us headed just off the wind, I managed to furl half the genoa.

The reduction in noise also reduced my heart rate. Another line around the furled sail reduced the genoa to storm jib proportions.

The arrival of the lifeboat was a particularly welcome sight at this moment. I had a discussion on VHF radio with coxswain Dave Cox.

Plan A was still an option but being put alongside was attractive. I suggested we could sail into the Loch, take in the mainsail and then have them take us in tow.

I was grateful to Dave Cox who, far from taking control out of my hands, was happy to concur. Just past the entrance the sea state reduced considerably.

The wind dropped to 25 knots but backed to come down the Loch, so I said we were ready for tow and I would drop the sails.

The lifeboat manoeuvered in front to come alongside. 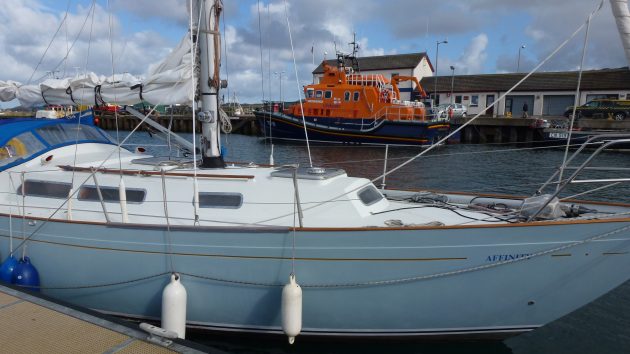 At one stage, with wind blowing the bow off, it looked as though we would crush the pulpit as we T-boned the lifeboat but Dave skipped the lifeboat sideways and neatly positioned alongside.

Lines were secured by competent, smiling crew who seemed to be enjoying ‘a fine day out’. I was relieved and grateful.

We know the RNLI has some of the finest crew but witnessing it first-hand is very special and, hopefully, not to be repeated.

A short while later, some 36 hours since we left Holyhead, I was looking at Affinity safely alongside the pontoon and feeling not a little weary, wondering how best to restore the main halyard to its rightful position above the waterline.

One of the lifeboat crew, another Dave, murmured ‘You’ll be wanting that line off the prop’. I asked if he knew anyone who could do it.

He enquired whether now would be a good time. In a trice he had donned drysuit and mask and released the wayward rope, which was actually around the prop shaft.

Last September, I met former RNLI Campbeltown coxswain Jim McPhee when he berthed next to us in Tarbert, in his MV Jade.

I told him this tale and he said he had mentored Dave Cox. There and then, I promised to write an account of our incident.

Eight years after the event, the COVID-19 restrictions allowed me to spend time at my computer.

Video of the Week: Take a Virtual Tour of a Modern Masterpiece in Fremont, California – Sotheby´s International Realty

Outside in: 3 Stunning superyacht designs