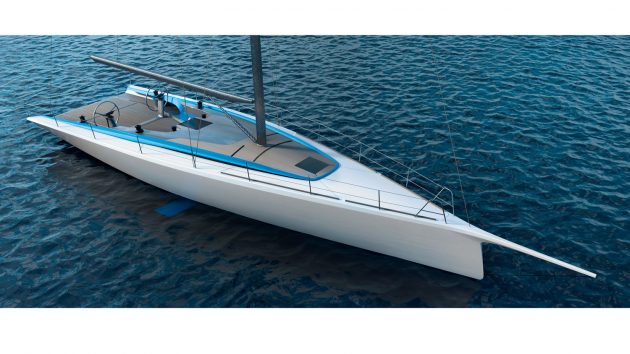 The first DSS foiling Infiniti 52 has emerged from the shed at Composite Builders in Holland, Michigan.

This design is intended to transform offshore racing, combining speed without the need for a big team and therefore reducing overall campaign costs.

It’s the first raceboat designed from the outset for use with transverse DSS (Dynamic Stability System) foils. These offer a jump in both stability and speed, without the complexity of other types of foil.

The foil extends to leeward of the hull and, as speed increases, the lift from the foil translates directly into righting moment. This means that a boat fitted with a DSS foil can produce the same righting moment as a boat with either much greater beam (and so more drag) or a heavier keel (and so more weight).

The Infiniti 52 follows the success of Infiniti 46R, Maverick, which has shown an impressive turn of pace also using DSS foils – though not quite the same transverse system employed on the Infiniti 52.

DSS foils have also been retro-fitted to a number of other designs, including the multiple Sydney to Hobart winner, Wild Oats XI

The second example is already in production, while the third is scheduled for delivery in time for next year’s Newport-Bermuda race.

The most Iconic items that were named after even iconic women

Restaurants in luxury Mallorca hotels featured in the Michelin Guide

Aston Martin Wants To Take Customers To The Race Track