With the Fastnet Race due to finish in Cherbourg for the first time in 2021, Christian Dumard offers his expert advice on the challenges competitors are likely to face

The new Rolex Fastnet Race course, finishing in Cherbourg instead of Plymouth for the first time this August, offers more options on the way back from the Fastnet Rock with different possible routes.

The new Fastnet Race course is likely to become more open if the wind shifts, with possible tactical options along the English or French coasts.

Meanwhile, the current will be critical around the Casquet and its TSS, Alderney, and the Raz Blanchard (also known as the Alderney Race). You must make a few key choices after rounding the Fastnet and when entering the Channel.

South of the Scillies?

The first main choice in this part of the Fastnet Race will be whether to sail south of the three Scilly TSSs, or through the middle of them. Most of the routings tend to take you through the middle. A few routes favour the southern option, to avoid light wind zones or, for example, to play a wind shift along a stationary ridge. Routing software will be good at finding the ways through.

The main decisions to be made will usually be in the Channel, where there will be very strong currents a few miles from the finish.

The parameters to be considered are: 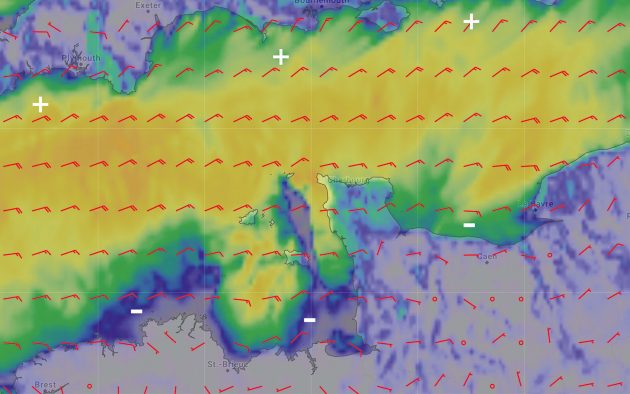 6am in the Channel with easterlies stronger on the English coast

The law of quadrants and its effect on seabreezes, as described by David Houghton more than 30 years ago, works well on both coasts. Timing is critical; the models tend to be good at spotting the diurnal wind variations along the coast, but understanding why the routing takes you in the northern or southern part of the Channel, depending on the time of the day, is important. 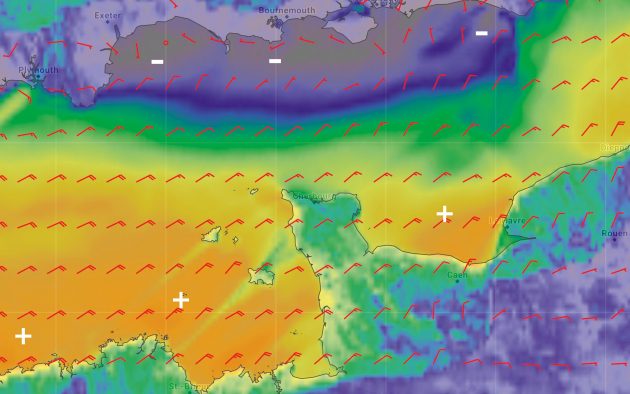 6pm in the Channel with easterlies stronger on the French coast

With westerly winds, the opposite happens if you have sunny conditions. The wind will increase along the English coast in the afternoon and decrease during the second part of the night. Likewise, the reverse occurs along the French coast.

Depending on the time, the current can be more favourable in the south or in the north of the Channel. In this example (below) the current is stronger along the southern French coast. 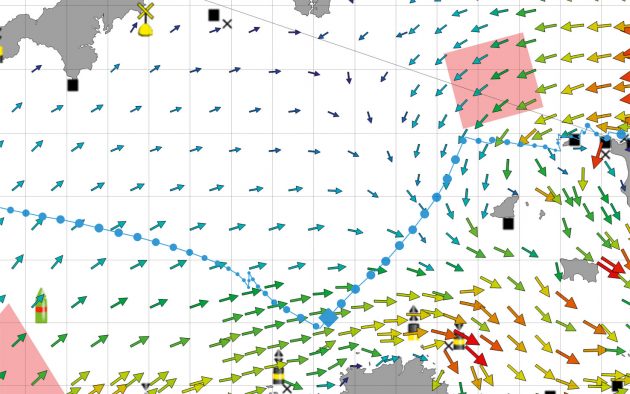 This shows the optimum route towards Cherbourg in a favourable flood tide. The pink zone is the Casquet TSS

Currents are very strong around the Casquet, Alderney and the Raz Blanchard and can reach up to 8 knots. Anticipating the current will often be the key factor; the current changes quickly and an error of 30 minutes in your timing can ruin a good option. You need to assess the risks of being stuck for five hours if your ETA to the Casquet is close to the time when you expect the current to reverse. 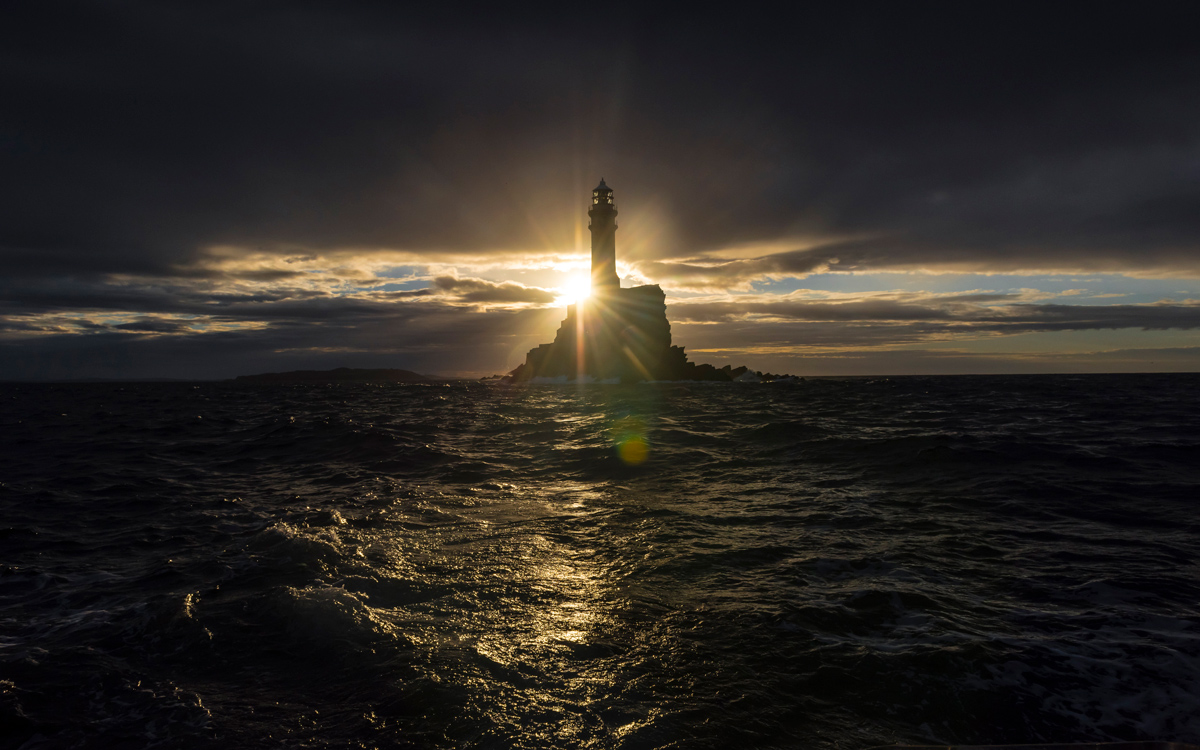 It is so notorious among sailors that you could say the Fastnet Rock is the northern hemisphere’s Cape Horn. Legends… 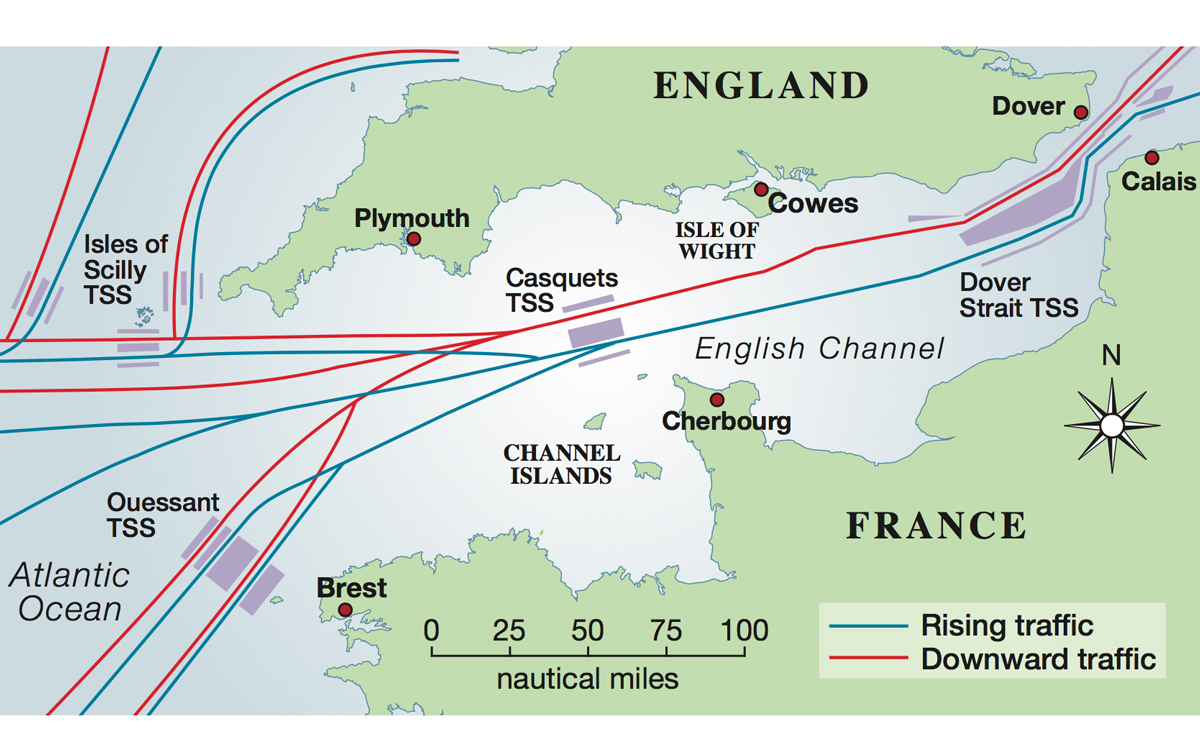 Discovering that the Rolex Fastnet Race will finish in Cherbourg for 2021 and 2023, I was initially very open minded…

If the current is favourable south of the Casquet TSS, you need to sail as long as possible in the strongest current before heading towards Cherbourg. In this case (below), we see that the route remains north, in the main flow, before sailing south-east towards the finishing line. 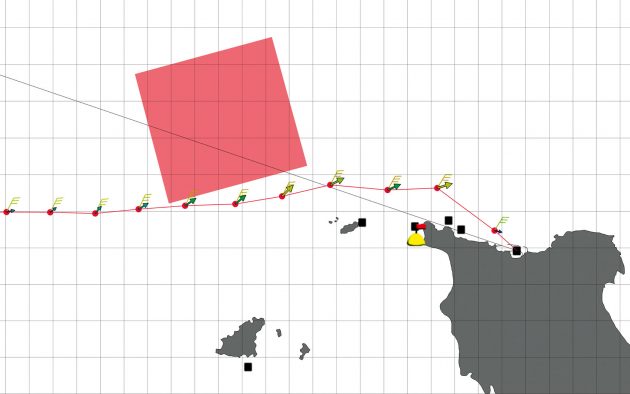 With the ebb, the game becomes more complicated, especially upwind. If you can’t make it against the current, you need to position the boat at the best place to get some shelter and get the flow first.

There are two main shelter zones. The first one is west of Alderney and the second is south of La Hague (see above). You’ll get less adverse current, and it will reverse first in those two places. If you can make it, the best one is south of La Hague, along the Cotentin (the Cherbourg Peninsula), where you’ll be positioned further east and thus closer to the finish when the tide changes. 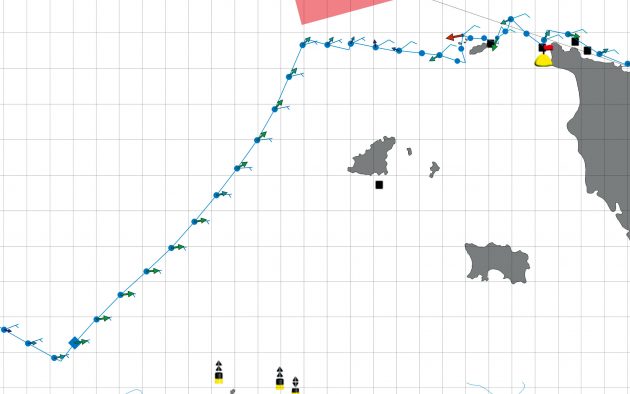 In this example (above), the route is close to Alderney. The boat gets well sheltered from the adverse current until it decreases and it reverses along the island first. 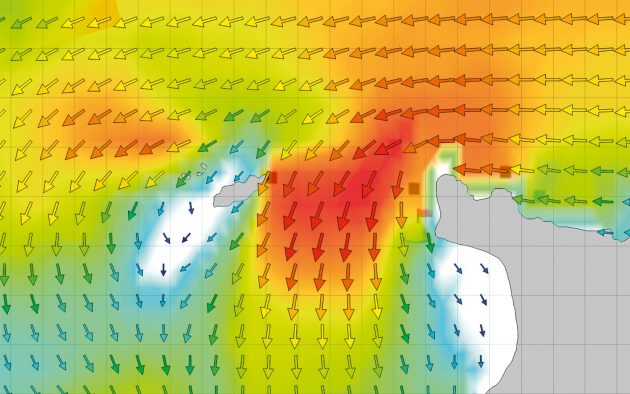 If you can make it south of La Hague, and if the weather conditions are good, there’s an inshore passage along the coast, east of the Gros du Raz lighthouse. The passage is narrow, about 60m wide. It will require very careful navigation, especially at night and with strong winds, but a few skippers have won a leg of the Solitaire du Figaro after sailing this passage. Others have damaged their boat attempting it. A safer option is to sail west of the lighthouse, where the current is not as strong as in the main flow.

Upwind (in easterly winds) the current will be at the top of priorities. During the ebb the true wind speed will decrease with the current pushing west. The combination of both adverse current and wind decreasing can be a disaster, as often seen in the Figaro races.

If sailing downwind with several gybes to the finish of the Fastnet Race, another key point is to anticipate the changes in wind direction due to the current changes. You want to sail on the headed tack. In some cases, sailing north of the Casquet TSS is an option to play the wind shifts due to the current properly.

For the Love of the Sea: Book review

8 Reasons You May Need A New Mattress

Android vs. iOS – Which is better?

It’s all about the people – a tribute to guides!