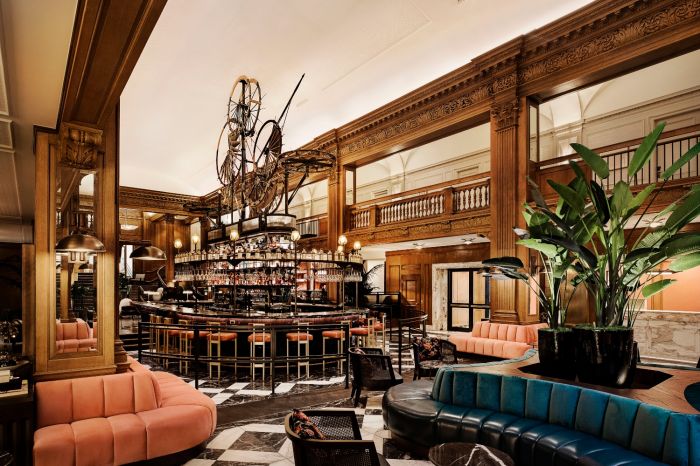 Since opening in 1924, Fairmont Olympic has been Seattle’s most celebrated social address and was added to the National Register of Historic Places in 1979. The hotel was built as a unique private and public partnership and has seen a few revitalization efforts but the latest $25 million renovation effort has paid emphasis to its storied and historic past. Signaling the largest renovation project for the historic hotel in 40 years, the hotel hired Spanish design studio Lázaro Rosa-Violán (LRV) to create the interior vision and design for the hotel which celebrates its storied grandeur with a lush new vision of Seattle luxury.

While the grand restoration project commenced in January 2020, it wasn’t until April 30, 2021, this timeless landmark unveiled the first chapter of its grand restoration, debuting a transformed main lobby, new Olympic Bar and updated event spaces. Designed for the modern traveler, the seamless reinterpretation of the soul of the hotel exudes elegance and intricate detail in design. When guests take the Instagram-worth escalators, with mirrors on all sides and beautiful pendant light fixtures, up to the main lobby, they are presented with a lobby that mixes greenery, rich textures, inventive modern forms and the glow of warm lighting. The transformed lobby is also home to the newest culinary offering at the hotel, Olympic Bar. 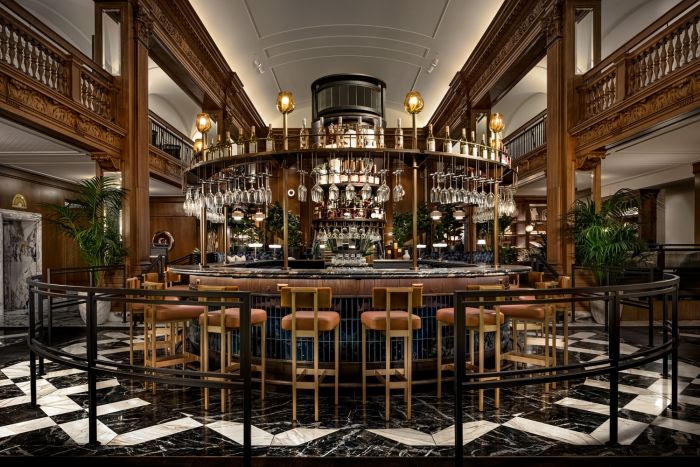 Predominantly featured in the center of the lobby, Olympic Bar fully transforms the space with a one-of-a-kind kinetic art installation that sits atop the new bar. LRV worked closely with FUHTAH Engineering and Prototypes out of Barcelona, Spain to craft this moving art piece made up of 400 pieces and is unique to any piece in the world, drawing inspiration from Fairmont Olympic’s historic hotel logo, a ship. Nautical elements and materials such as wood, iron, sails and rope to construct the art piece which brings a soft, ocean-like movement to the lobby, while casting dynamic shadows on the vaulted ceiling above. For a behind-the-scenes look at the installation of this one-of-a-kind art piece, click here.

“The creative and imaginative piece of artwork above Olympic Bar truly brings our space to life,” says General Manager Sunny Joseph. “As soon as you step into Olympic Bar, there is no question that you have arrived at the heart, soul, and social hub of the city. The space is designed to be Seattle’s hotspot for locals, travelers, and guests from around the world to meet, reconnect, and exchange ideas while surrounded and inspired by the hotel’s history and new glamour.” 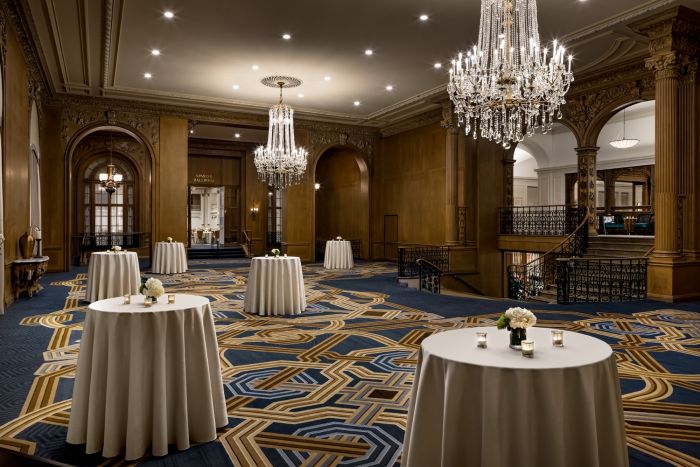 Beyond the stunning kinetic installation, historic elements shine anew thanks to the restoration of original flooring, relocation of their massive ornate chandeliers and a curated history walk. Hand-laid by artisans from Italy in 1924, the hotel’s original terrazzo and marble flooring was uncovered and restored to its original splendor, see more here. Weighing close to 300 pounds each, the chandeliers were carefully dismantled; removing, labeling and carefully wrapping each individual crystal and reassembled to their original brilliance and placed in their new location, the foyer adjacent to the Spanish Ballroom, a quick video can be found here. Last but certainly not least, on the Mezzanine level, guests can look through old photographs, historical documents and even the first-ever ledger at the hotel to catch a glimpse into the storied past.

Along with the main lobby and addition of the Olympic Bar, the hotel also revamped its event spaces and a total renovation of all guest rooms and corridors. Tasked with the redesign and refresh of the hotel’s 28,000 square feet of meeting space on five levels, Parker-Torres Design said, “It was our goal to create a unique design for every meeting space, from the grand volumes of the Spanish Ballroom and the Garden Room to the more intimate options on the Mezzanine and Assembly Row.”

The hotel also recently announced that later this year, the second chapter of the grand restoration story will debut a new culinary flagship that will reflect the evolution of the hotel’s beloved The Georgian restaurant and introduce an intimate spirit drinker’s enclave located behind a hidden bookcase in the main lobby.

Knot books: our pick of the best

Top Solutions To Prevent Sexual Harassment In The Workplace

Nissan Maxima dies after 2023, may return for electric era