EXCLUSIVE: Double Shot at Love is returning for a third season to MTV.

The ViacomCBS cable network renewed the dating competition, which is produced by SallyAnn Salsano’s 495 Productions.

The third run of the spinoff of Tila Tequila’s Shot At Love format will air later this year and will once again star Jersey Shore’s DJ Pauly D and Vinny Guadagnino. Pauly found love in season two, which aired last year, with Nikki and now the pair are looking to hook his friend Vinny up.

The show is produced by Todd Radnitz, Dan Caster, Diana Morelli and Salsano.

This comes as Salsano has had a busy year, shooting a slew of shows during the pandemic, scoring her first Discovery+ order and moving into new non-scripted genres.

Salsano told Deadline that she’s been “amazed” by what the non-scripted community has been able to achieve during Covid.

“I feel like reality producers, much like reality contestants, if you put us in a box, we’re going to figure out how to get out of it and I feel like the tables have turned and this is like us being on a challenge show,” she said. “The truth is you want to stay in your house and ride out the pandemic and stay healthy and safe, but we have a business to run and there are a lot of people that count on us, not only the buyers but my staff. It was really difficult; shooting in the pandemic was not for the week and at times it’s not for the strong, there are days when I think ‘What in god’s name are we trying to figure out’.”

Salsano’s first Covid shoot was the fourth season of Jersey Shore: Family Vacation (left), which was shot in a quarantine bubble at the Hilton Lake hotel in Las Vegas. She said that she was pleased that her first show back was Jersey Shore given her long and close relationship with the cast.

But she was still very well prepared and said that they received the financial support from the network to make it happen safely.

“As the NBA was talking about their bubble, I was studying it like a crazy person, I was talking to people in the military, in the government, people at the NBA, wives of NBA players,” she added. “If I don’t feel like I can do this myself, I can’t tell my staff that it’s ok.”

She also shot the fourth season of Floribama Shore, which was a bit more challenging. That show, which returned in February, was shot in Montana and Arizona and it was forced to shut down for two weeks in November after a crew member contracted Covid. “Because of the frequency of the testing schedule, it was annoying but no one was at risk and that was because of the amount of support and resources that came to us,” she said.

Shooting Jersey Shore, whose cast members have been making reality television for a long time, was a little easier creatively than Floribama Shore (right), which is more predicated on the single cast members going out and partying.

“We’ve become a little more self-contained [on Jersey Shore], they really feed off each other and they’re definitely a bit more senior and experienced that the Floribama crew,” she said. “If we’d have taken the Jersey cast in season four and locked them in a house and said you can’t go out to a club at night, they would have tied us up.”

Another show that Salsano and her crew shot during the pandemic was Pushing The Line for Discovery+. The show follows a group of people who during the day are walking across 900-foot gorges and at night they’re campsite is a party.

She calls it “if Jersey Shore had sex with Free Solo and they had a baby” and joked that sometimes they didn’t have electricity in the desert but they had Covid tests.

“That was a show that was so different for us as a company, we had not done big outdoor adventure shows so we were taking on something brand new for a new streamer, with probably the most dangerous, exciting, psychotic thing I’ve ever done,” she added. 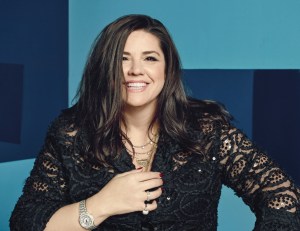 Salsano (left), who also produced Peace of Mind with Taraji for Facebook Watch during the last twelve months, said that it is “shocking” the amount of time that Covid takes up. “It’s a huge time suck. Every show takes 50% more time,” she said. “You almost need a showrunner to deal with Covid and someone who can only focus on creative.”

But the early days of the pandemic did allow a lot of time for development and she has reconnected with a number of network buyers. She said that it is developing a number of gameshows, more competition formats, building on Martha & Snoop’s Potluck Dinner Party in the food space as well as more character-based reality series, which she said were easier to cast for with so many people stuck at home.

“Our slate this year is very different this year,” she said. “We were deliberately trying to push into new areas before the pandemic and I think the pandemic gave us the time to bring that to life.”

Salsano still has an overall deal with ViacomCBS, but it is non-exclusive, which allows her to produce shows for other networks, such as Discovery+. Given the number of non-scripted reboots currently happening on Paramount+, it wouldn’t be surprising if Salanso, who previously produced shows such as Disaster Date for MTV, Repo Games for Spike and Tool Academy for VH1 is tasked with bringing back some of her older formats. “I would love to. I think some of the shows are ripe for it.”

She is buoyed by the current state of the non-scripted business but admits that it has its moments. “Any time there’s a sense of change, it’s scary for everyone, it’s scary for the linear folk and it’s scary for the streaming folk. It’s odd that it happened in a pandemic, but I feel like for the first time ever, regardless of what side of the fence you’re on, if you’re a studio, producer or at a network or streamer, everyone is out on a limb right now. The pandemic has, in a weird way, bonded us all, and we all feel like we’re in it together and sharing in a way that we never shared before, letting in people behind the curtain. We’re not so fancy, we’re scrappy,” she said. “We’re able to take more swings in unscripted [compared to scripted. We can create, shoot and turn around in a much faster way. It’s not about who is better, but if it’s a race, we’re the gold medallist.”

Falcon And The Winter Soldier And More TV Moments This Week