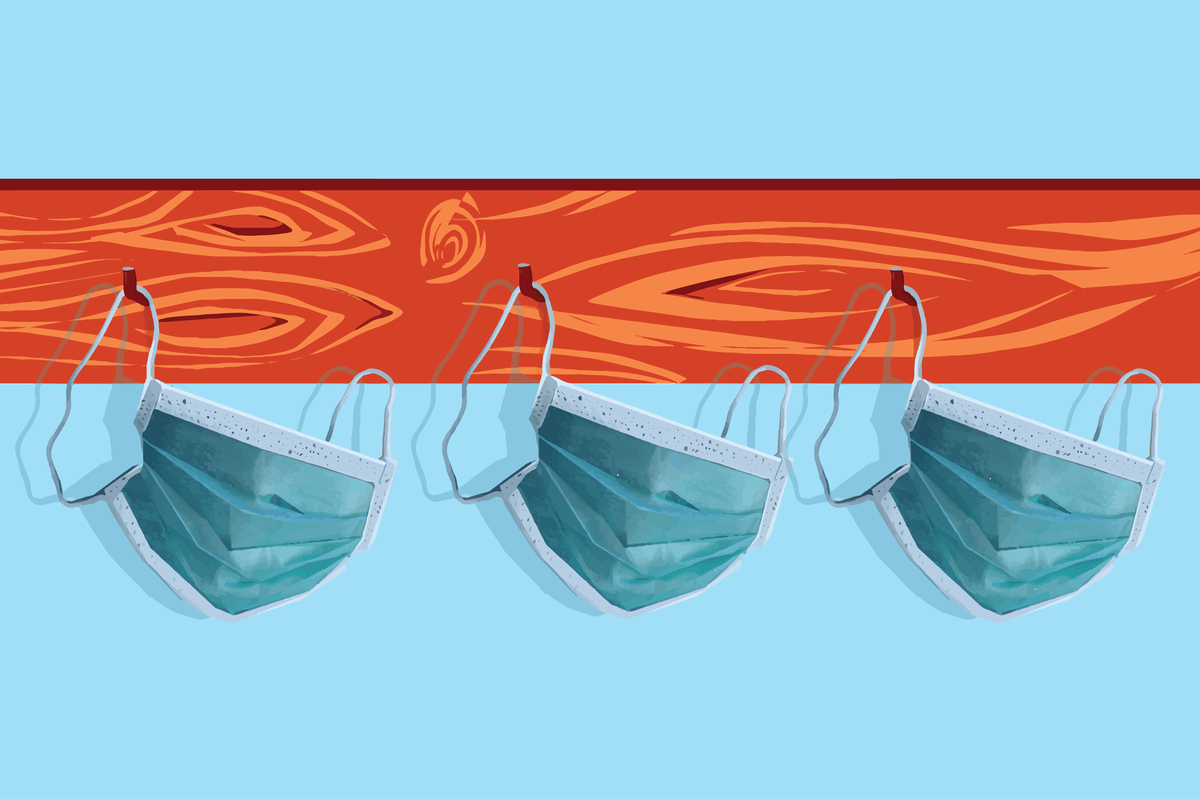 The Centers for Disease Control and Prevention released its much-anticipated, updated guidance Friday to help school leaders decide how to safely bring students back into classrooms and/or keep them there. Rather than a political push to reopen schools, the update is a measured, data-driven effort to expand on old recommendations and advise school leaders on how to “layer” the most effective safety precautions: masking, physical distancing, handwashing and respiratory etiquette, ventilation and building cleaning, and contact tracing.

For politicians, parents and school leaders looking for a clear greenlight to reopen schools, this is not it.

“CDC is not mandating that schools reopen,” CDC Director Dr. Rochelle Walensky said Friday on a phone briefing with reporters.

Instead, the CDC goes to great lengths to explain that proper mitigation can help keep kids and staff safe at school, even in hard-hit communities, though it also warns that schools lulled into a false sense of security because of low community transmission rates could still spread the virus if they don’t enforce mask-wearing and socially distanced classrooms.

The updated guidance comes as President Biden tries to make good on his promise to help more K-8 schools reopen within his first 100 days in office. School reopening has become a potent political battle between parents and educators. In Washington, Republicans have used it to criticize the Biden administration for bowing to pressure from a powerful interest group, teachers unions, rather than listening to scientists and the concerns of parents.

The update offers a few key changes to earlier language, including a color-coded chart that divides schools’ reopening options into four zones: blue, yellow, orange and red. Districts with low community spread of the coronavirus (blue, 0-9 new cases per 100,000 in past 7 days) or moderate transmission (yellow, 10-49 new cases) are encouraged to consider reopening for full, in-person learning.

Schools in areas with substantial transmission (orange, 50-99 new cases per 100,000) may still consider a limited reopening, as long as they can layer multiple safety strategies in the classroom. In hard-hit communities (red, more than 100 new cases per 100,000) elementary schools may consider limited reopening, with physical distancing required, but the CDC recommends middle and high schools be virtual-only unless mitigation strategies can be met.

The added clarity comes as school leaders have clamored for more practical information about how schools can reopen, especially if they can’t afford all of the CDC’s recommended safety strategies. For example, before Friday’s release, Noelle Ellerson Ng, of The School Superintendents Association, wrote to the U.S. Department of Education seeking clarity for schools that don’t have room to space children the recommended 6 feet apart:

“For those districts that just can’t make that work, but could make 3 or 4 feet work, what can you tell us about how to layer on additional mitigation strategies to offset the tradeoff that comes from not being able to execute the 6-foot standard?”

According to the updated guidance, that 6-foot standard should be considered non-negotiable for K-12 schools in districts where transmission is substantial or high.

Also, late last month, several CDC scientists co-authored an article in JAMA, the journal of the American Medical Association, saying there is little evidence that school reopening has contributed meaningfully to the spread of COVID-19.

Friday’s guidance cites much of the research referred to in the JAMA article, including studies of schools in North Carolina and rural Wisconsin that reopened in the fall. In the former case, a review of districts serving more than 90,000 students and staff found just 32 infections acquired in school — compared with 773 cases of students and staff infected outside school. None of those 32 in-school transmissions involved students infecting teachers or staff. In the other study, of 17 Wisconsin schools, high compliance with mask-wearing helped keep the COVID-19 incidence lower in schools than in the larger community. Of 191 documented COVID-19 cases among students and staff, just seven happened at school.

However, a new CDC survey of nearly 4,000 middle and high-schoolers released this week shows how inconsistent mask use can be among older students (13-21). “Approximately 65% of students reported that fellow students wore a mask ‘all the time’ in the classroom and in hallways or stairwells.” But mask use dropped precipitously elsewhere, from just 42% on school buses and 40% in restrooms to 36% in the cafeteria (when not eating).

The new CDC guidance also warns schools to think twice about resuming athletic activities, especially indoors. The agency reported on an outbreak stemming from two high school wrestling tournaments in Florida, after which 38 of 54 attendees who were tested, tested positive. Some brought the virus back to their family and friend circles. One person died. In the new guidance, the CDC advises that, in communities with substantial transmission, sports and extracurricular activities should only occur “if they can be held outdoors, with physical distancing of 6 feet or more.” In communities with high transmission, they say, these activities should be virtual only.

The guidance walks a tightrope on how important it is for teachers and other school personnel to be vaccinated before schools should reopen. While the guidance makes clear that vaccinating educators and staff can provide an important and effective layer of protection, it also recommends that “access to vaccination should not be considered a condition for reopening schools for in-person instruction.”

In a recent interview with Boston Public Radio, Randi Weingarten, head of the American Federation of Teachers, appeared to agree, saying that, while vaccination for teachers is “not a precondition” to reopen schools, she considers it a top priority.

CDC guidance places education workers in group 1b, “frontline essential workers,” high up in line for vaccine priority. However, states are free to make their own decisions. In some parts of the country, teachers are lining up for their shots while continuing to work from home, and in other states it’s the opposite.

In addition, the guidance provides new details on how schools can use testing to spot and contain outbreaks. For example, it recommends the weekly testing of teachers and staff at all levels of community transmission — and weekly testing of students in moderate- to high-transmission areas.

Up to now, budgets have limited most public schools from widespread, asymptomatic screening with frequent, rapid coronavirus tests, a method used by some private schools, movie sets and, with mixed results, at the White House. The state of Massachusetts recently launched an effort to test everyone at a school once a week using a “pooled” testing model.

For the first time, the CDC’s schools guidance also grapples with the new COVID-19 variants that have begun spreading across the U.S. and could further complicate reopening plans. For now, the CDC says, these variants are “of concern” and require more study, and it warns that, if the variants begin driving community spread, “updates to this guidance may be necessary.”

The Biden administration has been under intense political pressure to make good on Biden’s first 100 days promise to help reopen schools, and administration officials have held up the updated CDC guidance as a key tool for making that happen. Speaking on MSNBC on Thursday, Andy Slavitt, a White House senior advisor on COVID-19, said the CDC guidance would give school districts and local communities the information “they need to begin to do that and to begin to do that aggressively.”

Earlier in the week, Biden’s team gave a definition of school opening that was criticized for falling well short of what parents expected from Biden’s promise. Psaki said Biden would be making good on his pledge if more than 50% of schools had some teaching in classrooms “at least one day a week. Hopefully, it’s more.”

(There is no official national count of open schools, but the organization Burbio estimates that about two-thirds of districts already met this benchmark as of Sunday, Feb. 7.)

The backlash was swift, with charges that Biden’s team, which has promised to follow the science, was instead siding with powerful teacher unions, some of which have resisted a return to in-person instruction until all teachers or even all students are vaccinated. Republicans have seized on the frustration of parents who want their children back in school and the shifting messages from the Biden White House.

On Thursday, Psaki clarified that Biden wants schools open five days a week. “That’s what he wants to achieve,” Psaki said. “And we’re going to lead with science.”

Friday’s guidance definitely leads with the science, using data and mitigation best practices to help school leaders understand how best to reopen and/or stay open — without attempting to steer them into a one-size-fits-all plan.

As power outages rock Texas, here’s what you should know to stay safe

Arrest made in Indianapolis mass shooting that left 5 people, including pregnant mother, dead