BTS has topped yet another year-end chart, this time as the reigning kings of Twitter.

A new Twitter survey has revealed that BTS were the #1 most tweeted-about musicians in the U.S. for the fourth year in a row. The group beat out Kanye West, Beyonce and Drake for the most mentions on the social media platform in 2020. Four of the top ten musicians on the list were K-pop groups, edging out heavy hitters from 2019 like Ariana Grande, Justin Bieber and Billie Eilish.

As expected, BTS also dominated the more specific K-pop lists on Twitter, ranking as the number one most mentioned K-pop artist in the world for 2020. BTS’ hit song “Dynamite” was also the most-mentioned K-pop song on the social media platform.

Twitter looked at data from things like mentions of band members, band names and popular fan hashtags used over the course of the calendar year in 2020. While BTS, and many so-called “K-pop” groups, have crossed over into the mainstream music scene, Twitter still calculates K-pop mentions separately, due to the genre’s popularity on social media.

In terms of K-pop, BTS was the number one K-Pop artist on Twitter, followed by NCT, EXO, Blackpink and GOT7. Rounding out the top ten: TREASURE, Seventeen, Tomorrow x Together, Twice and Ateez. All of these groups released new projects in 2020, adding to their mentions. TREASURE also tops the list of “K-pop artists to watch in 2021,” as data shows that they were the fastest-rising K-pop act in 2020. 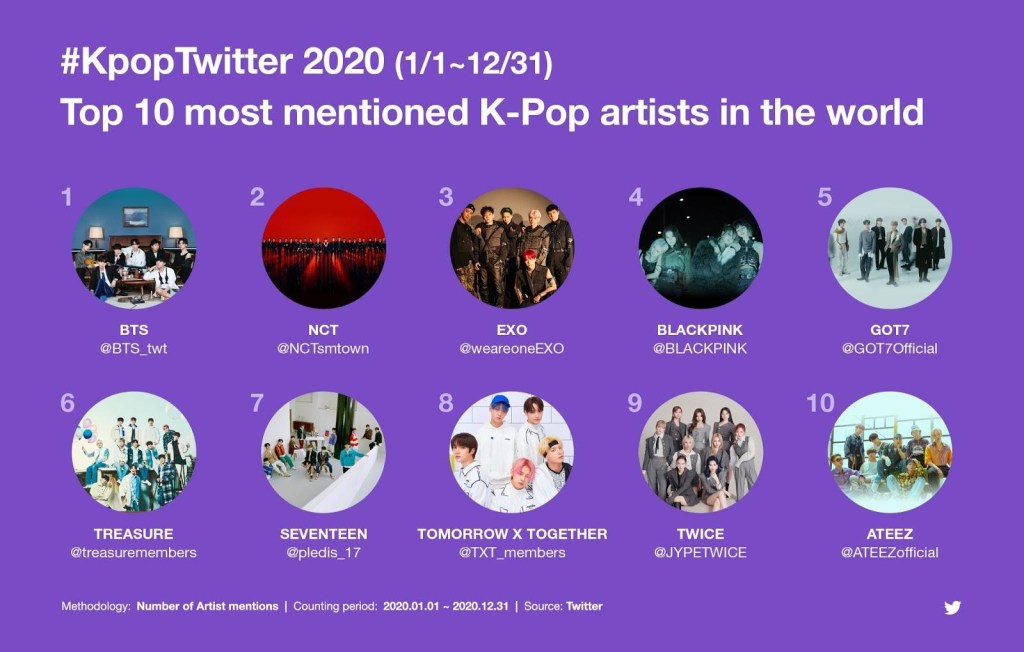 When it came to the most popular songs on Twitter, BTS held down the top four slots, with “Dynamite,” “ON, “Black Swan” and “Life Goes On” being their most tweeted-about tracks. GOT7 had the number five track, with “Breath.”

It goes without saying that K-pop continues to win over new fans across the world. The new report reveals that there were 6.7 billion tweets about K-pop in 2020 – a 10 percent increase from 2019. More proof of K-pop’s global dominance: the most K-pop activity came from Indonesia and India, followed by South Korea, the Philippines and the U.S. The report also shows a surge of interest from countries like Brazil, Spain, Turkey, France, and Saudi Arabia.

Beyond music, K-pop idols and fans also came together on Twitter last year for social good. The second most-Tweeted hashtag of 2020 was #BlackLivesMatter, and Twitter says the K-pop community mobilized to help amplify the hashtag across the world. K-pop fans also made news when they took over the #WhiteLivesMatter hashtag last June, spamming it with fan cams of their favorite artists instead.

It wasn’t just posting either — the K-pop community on Twitter also helped to raise funds for important causes, through initiatives like #MatchAMillion, where BTS fans (a.k.a. ARMY) matched the group’s $1 million donation to Black Lives Matter.

Twitter says the #KpopTwitter hashtag “gave fans another way to stay connected and express their views on broader issues in society.”

Queen Latifah to Get Lifetime Honor at 2021 BET Awards

My Chemical Romance Postpones Tour To 2022