Boat owners are being advised to take steps to mitigate the effects of biodiesel on their inboard engines.

Marine fuel experts are reporting a rise in the number of sailors finding increased filter plugging from a new contaminant, carboxylic acid, or soap, forming as a result of Fatty Acid Methyl Esters (FAME) content in diesel.

Most skippers are only aware of the problem when their engine stops.

In the UK, FAME content in diesel is 7%. The Government says there are ‘no imminent plans’ to raise the FAME content.

The UK Renewable Transport Fuel Obligation (RTFO), which is one of the Government’s main policies for reducing greenhouse gas emissions from road transport in the UK, mandates that FAME content needs to rise to 12.4% by 2032.

Some marinas, like MDL, advertise selling FAME-free diesel but others don’t, and carboxylic acid could also be a problem for sailors who have to jerry-can fuel from the forecourt pump to fill up their boats.

The RYA advises that although fuel suppliers are not compelled to add FAME to fuel that is being supplied for use by pleasure craft, as a result of the UK Renewable Transport Fuel Obligation (RTFO), it is highly likely that fuel will contain FAME as it is a practical necessity for suppliers to meet their RTFO obligations. 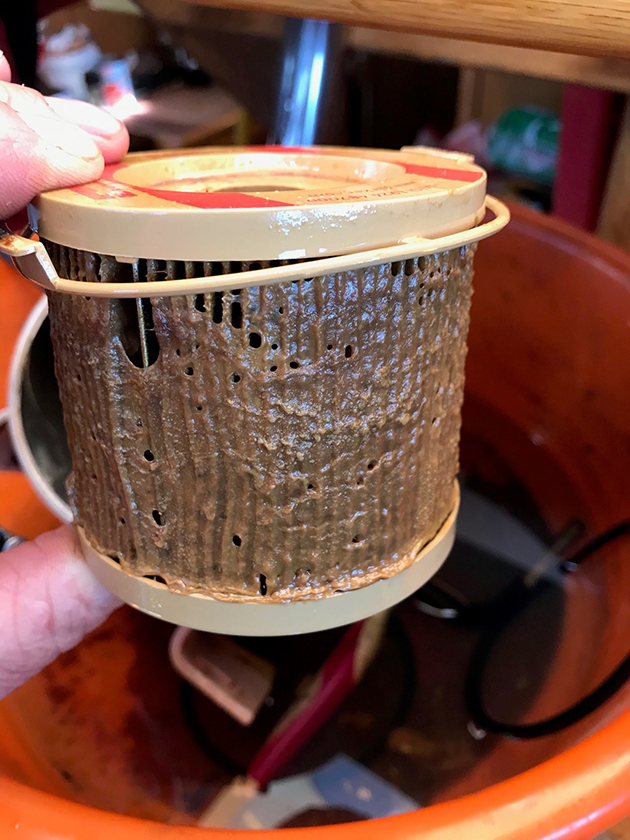 FAME is made from plant oil, animal fats or waste cooking oil. It is manufactured to a standard and tested before being added to diesel as part of efforts to reduce environmental pollution, as well as production costs.

Peter Weide is the co-director of Marine 16, a UK manufacturer of fuel additives, biological and general maintenance engine products.

He said carboxylic acid problems have also affected the agricultural industry, and was ‘a big issue’ for commercial shipping.

He worked with the National Farmers’ Union, tractor manufacturer John Deere and Marine 16 suppliers to gather fuel samples which were sent off for detailed chemical analysis.

The results revealed that the FAME was reacting to the metals in the diesel to create the carboxylic acid.

‘On a boat, the carboxylate acid sinks to the bottom of the tank. When you hit the breakwater or rough seas it gets churned up and sucked into the fuel pipe where it blocks the filter and your engine stops,’ explained Weide.

He said FAME, like plants, also oxidises and degrades, which is why diesel shouldn’t be stored for more than six months.

For many boat owners, this is impractical and Weide says the only way to slow down the oxidation is for boat owners to add an anti-oxidant to fuel. He said the key to combating carboxylic acid was to remove all water from diesel and add an antioxidant, as FAME is highly hygroscopic, and to keep the fuel tank topped up to prevent condensation forming.

If the boat is being laid up, draining the tank and fitting a silica gel breather is the best option. 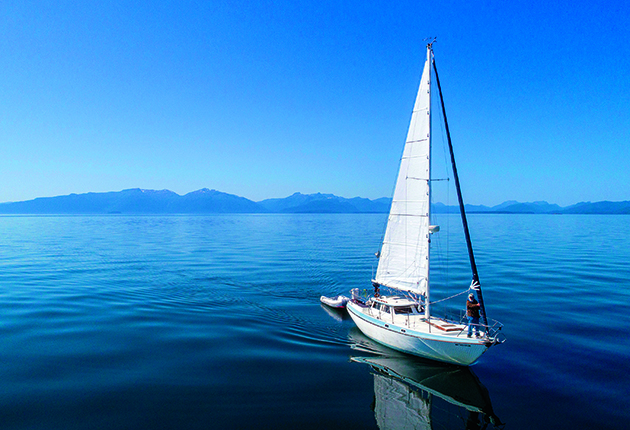 Modern marine diesel engines may look very similar to the large, noisy, oily chunks of iron of yesteryear, but a… 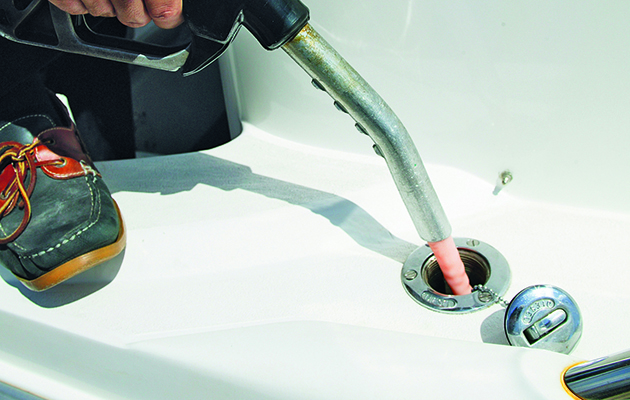 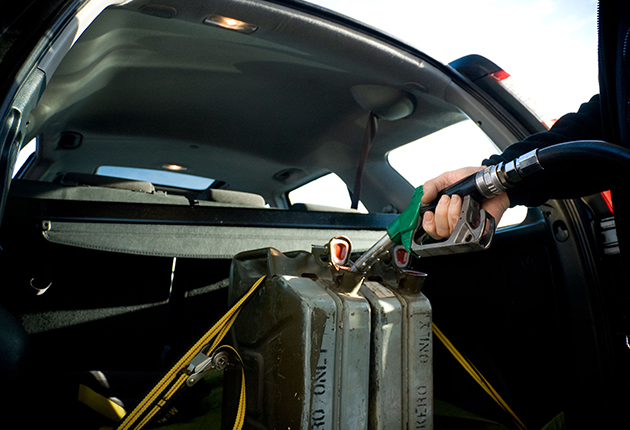 From 30 June 2021, recreational boat owners in Northern Ireland have to fill up their vessels with white diesel. Currently… 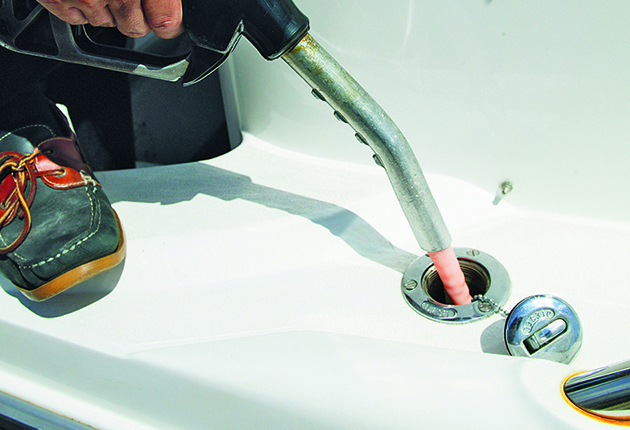 He estimates up to 40% of boat owners will experience carboxylic acid problems with their diesel engine at some point, and Marine 16 is now blending an anti-oxidant into its Diesel Fuel Complete to specifically slow down FAME degradation.

Weide says legacy additives which have been around for years will not work against FAME degradation. He said they work by absorbing water into the fuel so it can pass through the engine.

‘They worked well decades ago but saturated water in diesel can be extremely harmful to a modern engine. Also, as it absorbs the water from the bottom of tank, whilst the hygroscopic effect of the FAME absorbs water from the top of the tank, the result is very saturated “wet” diesel; worst thing ever for a modern diesel engine.  By contrast our philosophy is to add a demulisfier into our Diesel Fuel Complete to help it drop to the bottom of the tank where it can be drained off or picked up by the Diesel Dipper,’ he explained.

Concern has also been raised about the new E10 petrol, which was introduced in the UK in September 2021, and its effect on older outboard engines.

This replaced E5, the previous baseline fuel mix of 5% ethanol; the Government has said it will still be available for the next five years, although it will become more expensive. 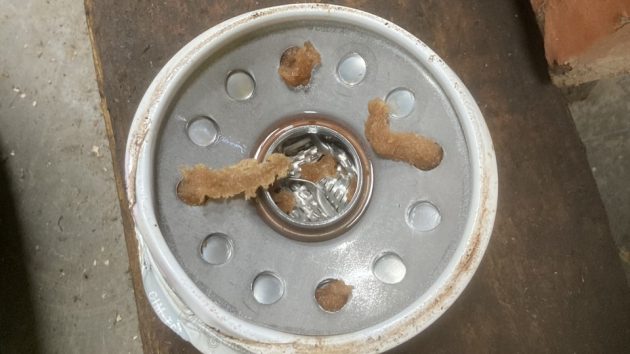 Carboxylate acid or soap coming out the top of a fuel filter. Credit: Peter Weide/Marine 16

It is also a solvent which can eat through some plastic, rubber and fibreglass like rubber seals and hoses. Others have reported poor starting, performance and fuel consumption, with ethanol 34% less energy dense than petrol.

MDL, boatfolk and Premier Marinas have all switched to E10 petrol and advise boat owners to check compatibility with their engine before filling up.

Premier said it added the advanced enzyme compound, Soltron, to all of its diesel to ‘increase fuel efficiency, power output and reduce greenhouse gas emissions’.

The trade association for the liquid fuels distribution industry, UK and Ireland Fuel Distributors Association (UKIFDA) said it was not aware of any carboxylic acid issues in diesel used by boat owners but were aware of ‘material compatibility issues’ with older agricultural equipment.

It recommends avoiding storing diesel for longer than six months, making sure tanks, filters, pipework and seals are regularly examined and cleaned and to use additives, after receiving expert advice.

Get to know Laurent Maugoust, The Master of French Style

Access to Cannabis Through the Years: What Has Changed?

The Legendary Cannonball Run at The Portofino Hotel

Sailing through a storm: One man’s tale of near disaster