Biden’s History On Gun Bills And Why Advocates Are Disappointed : NPR

President Biden speaks during his first press briefing in the East Room of the White House on Thursday. 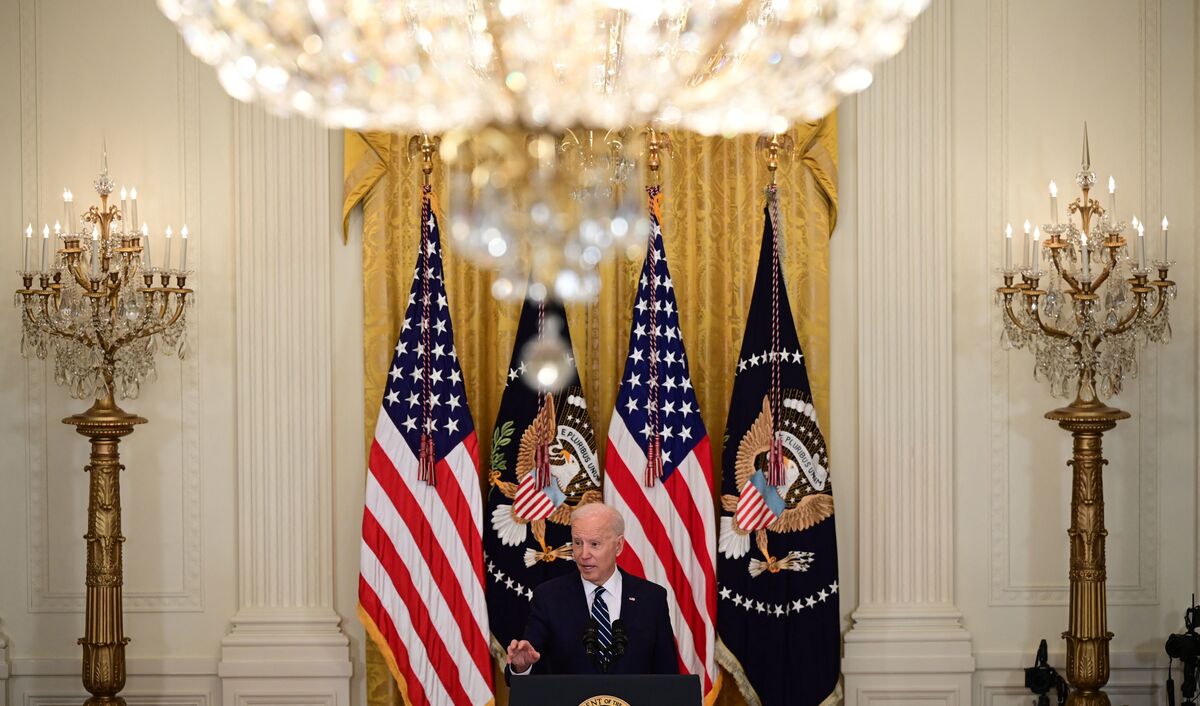 President Biden speaks during his first press briefing in the East Room of the White House on Thursday.

When President Biden was asked about actions he would take on gun violence prevention and said “it’s a matter of timing,” and pivoted to talk about infrastructure, it wasn’t what Kris Brown had been expecting.

“I am disappointed, I will say, at what I heard from him,” said Brown, who is president of Brady United Against Gun Violence.

That disappointment comes, in part, because of Biden’s long history of working alongside gun safety advocates, going back to the 1990s when he helped shepherd through the Brady Bill requiring background checks on most gun purchases as well as a temporary ban on sales of some military-style semi-automatic guns.

Just two days before Thursday’s press conference, the morning after the King Soopers mass shooting in Boulder, Colo., Biden said he didn’t need to “wait another minute, let alone an hour to take common-sense steps that will save lives in the future and to urge my colleagues in the House and Senate to act.”

He urged them to bring back an “assault weapons” ban and limits on high-capacity ammunition magazines.

But Biden knows better than almost anyone just how difficult that would be.

“I’m not even angry anymore. I’m just as frustrated as hell,” Biden said in 1994 in the middle of a lengthy fight with congressional Republicans and the National Rifle Association over the crime bill. It was a huge bill he’d been working on for a long time that included hiring more police officers, promoting community policing and crime-reduction strategies and drug courts, but also included sentencing changes blamed for a precipitous rise in mass incarceration in the U.S.

It also had a ban on a variety of semi-automatic guns; in a particularly heated speech, Biden said that was what was holding up the whole bill.

The ban on military-style rifles and other high-capacity weapons was something many Democrats (though certainly not all of them) and gun safety advocates had spent years trying to pass. And then, at the last minute, to get it through, a sunset provision was added.

“It had not been in any prior draft. I mean, it’s a very unusual feature of a law,” said Brown, who was a congressional staffer working on the issue at the time.

After 10 years, the sunset kicked in and the ban lifted. Ever since, Democrats, including Biden, have unsuccessfully tried to get it back and make it stronger. Meanwhile, AR-15’s and other similar weapons have become very popular, making Biden’s new call for a so-called assault weapons ban even more politically challenging. 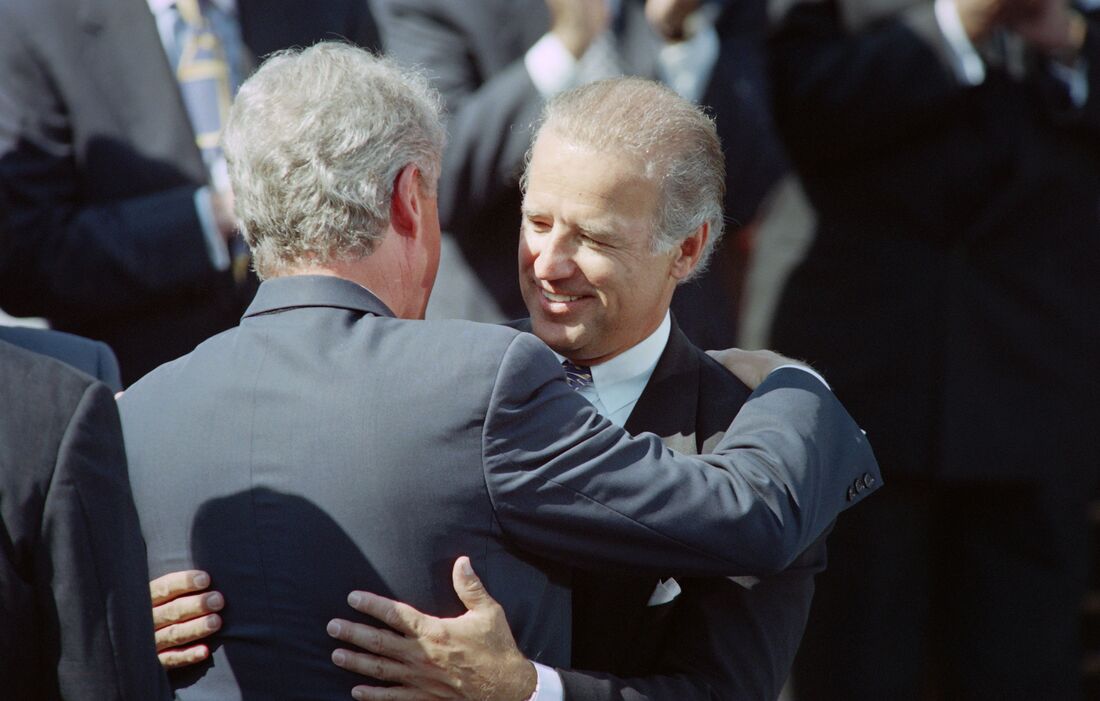 Then-President Bill Clinton hugs then-Sen. Joe Biden on Sept. 13, 1994, during a signing ceremony for the crime bill on the South Lawn of the White House. 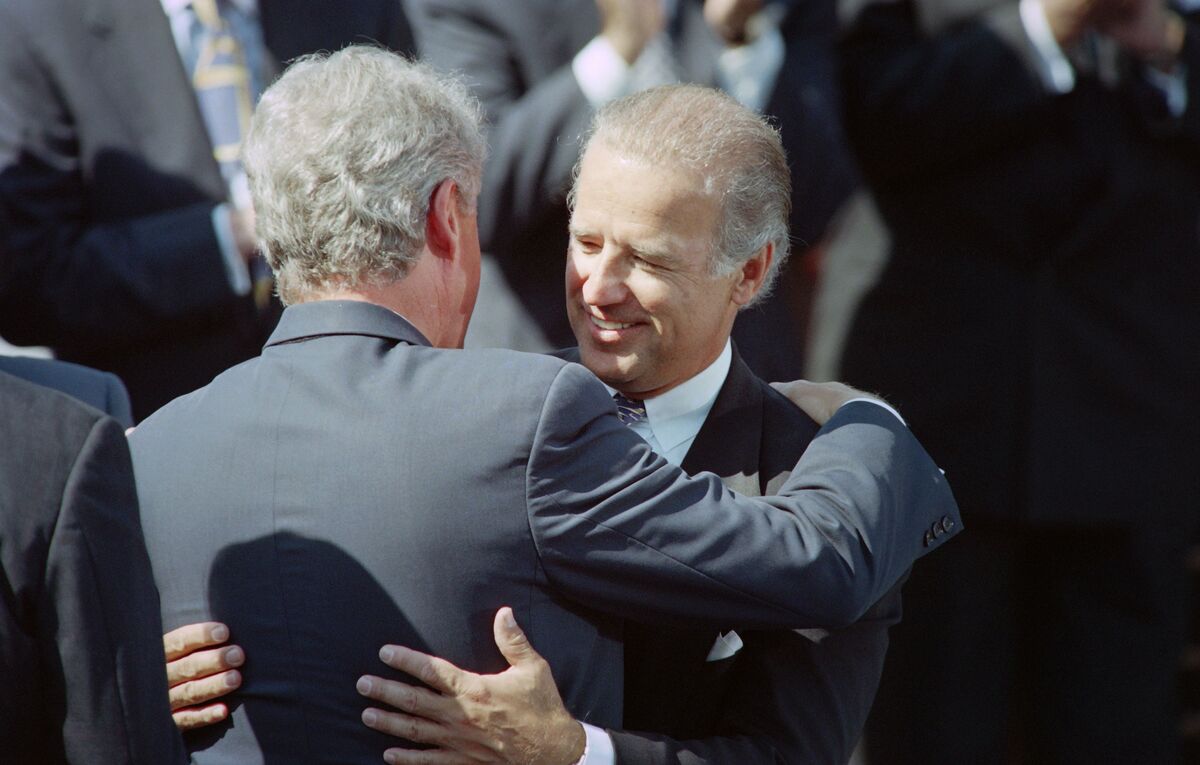 Then-President Bill Clinton hugs then-Sen. Joe Biden on Sept. 13, 1994, during a signing ceremony for the crime bill on the South Lawn of the White House.

Biden was also involved in passing the Brady Bill, a 1993 law requiring background checks for most gun purchases, which is still in place today. It was named for James Brady, President Reagan’s press secretary who was gravely injured in the assassination attempt on Reagan in 1981. Brady and his wife, Sarah, threw themselves into getting gun control legislation passed.

“It took six years and seven votes actually, and they had the NRA opposing them every step of the way,” said Brown.

But there are loopholes and exceptions, and buying guns over the Internet wasn’t even a thing in 1993. A generation and many mass shootings later, that legislation from the ’90s still remains, because nothing else has been able to pass since.

Democrats lost control of the House of Representatives in 1994, and some who lost blamed the backlash to their vote on the semi-automatic weapons ban. The NRA actively campaigned against members of Congress who had supported the ban. There have only been brief moments when lawmakers prioritized gun control measures, usually after mass shootings, only to see the efforts fizzle as the nation’s attention faded.

After the Sandy Hook school massacre in Newtown, Conn., then-President Barack Obama tasked his vice president with finding a way to bolster outdated gun laws. Biden held listening sessions with law enforcement, the gun lobby and met at length with the families of those 20 children shot down at their elementary school.

“There is nothing that has gone to the heart of the matter more than the visual image of little 6-year-old kids riddled — not shot with a stray bullet — riddled, riddled with bullet holes,” Biden said at one event. This time, he argued, would be different because the crime was so unthinkable.

But as days stretched to weeks, what looked like a bipartisan compromise to expand background checks began falling apart in the Senate. A few days before the vote, Biden saw the writing on the wall.

“People say, ‘Well what am I going to say to the NRA?’ Well, I’ve got a question for you: What are you going to say to those parents?” Biden asked, emotion in his voice. “Look them in the eye and tell them you concluded there’s nothing you can do.”

The families were in the gallery overlooking the chamber, when Biden, in his ceremonial role as president of the Senate, presided over the vote where the legislation failed. It didn’t have enough support to overcome a filibuster, though would have passed if it had gotten an up-or-down vote.

At his press conference Thursday, Biden said, “Politics is the art of the possible.” It is not clear whether his experience over the decades led him to believe at this moment that the federal gun legislation he said he wanted earlier in the week just isn’t possible. But White House press secretary Jen Psaki defended his decision to focus next on infrastructure.

She said he understands the frustration of the gun safety advocates “and he understands it as one of the few people in government who ever beat the NRA twice by leading the fight to pass the Brady Bill and the assault-weapons ban.”

She pointed to 23 executive actions taken by Obama when the legislative efforts failed and said there is a review underway now of actions Biden could take. She said, in the absence of federal laws, states have taken up their own gun control legislation, including “red flag laws” meant to keep guns from people who are an imminent danger to themselves or others.

“But you know, we would say that the frustration should be vented at the members of the House and Senate that voted against the measures the president supports,” Psaki said. “And we would certainly support their advocacy in that regard.”

This is unlikely to satisfy advocates, whom Biden has worked with for years, who want him to make gun safety a priority and take bold action.

FedEx’s Limits on Phones in Spotlight After Indianapolis Shooting

Washington Offers Joints To Adults Who Get The COVID-19 Vaccine : Coronavirus Updates : NPR

Protests Across U.S. Call For End to Anti-Asian Violence