In remarks at the White House, President Biden went beyond defending unions by saying that every American should have the right to join a union.

Clip of the President’s speech: 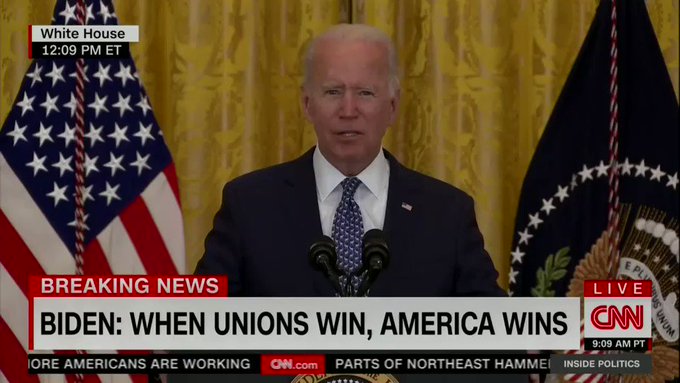 When Congress passed the 1935 Labor Relations Act, it didn’t just say unions should be allowed. That’s how it’s kind of viewed for a long time.  It said that we, the government, should encourage unions and collective bargaining, making it easier.  That’s what it said. I believe every worker should have a free and fair choice to join a union. The law guarantees that choice. That belongs to workers, not to their employers or special interests.

That’s why signing the executive order creating the White House task force on worker organizing and employment to facilitate that choice whenever and wherever we can. Look, I want to thank Vice President Harris and Secretary Walsh for leading that task force. That’s why I want to see Congress pass the PRO Act and send it to my desk immediately. That’s why I want us to extend organizing collective bargaining rights to state and local government employees like transit workers, first responders, health care workers, and other essential workers.

Government should never be a barrier to workers organizing. It’s the government’s job to remove those barriers. But it’s up to workers to make the choice whether to organize or not, whether to form a union or not. We need to help them understand why that can be the right choice for them. We know the economic reasons.

Union members get higher wages, better benefits like health insurance and paid leave, protection against discrimination and harassment, and safe and healthy workplace. But there’s another reason, a basic American reason. Workers who join unions gain power, power over the decisions and the decision-makers that affect their lives. Workers’ voices are heard and heeded. In a simple word, a union means there is a democracy, democracy. Organizing, joining a union, that’s democracy in action. It’s about dignity on the job, but it’s also about creating good jobs.

In one swoop, President Biden rejected the conventional wisdom meaning of the Labor Relations Act, said that every worker should have the ability to join a union, and the government should break down barriers to unionization.

I have been going back through presidential speeches from the last forty-plus years, and I had to go back to the 1960s to find presidents who spoke about unions in strong terms.

Biden is out to restore unions and collective bargaining power in America, and with union membership growing again, he has a real chance to be successful.

Saudi Arabia says hajj to be limited to 60,000 in kingdom