The Spirit 44e is a modern classic cruiser that conceals cutting-edge power management technology and has been built with a sustainable ethos. Theo Stocker reports on a test sail

Boats have been built of wood since Noah first put axe to tree. For devotees of the classic style, Spirit Yachts have been building head-turningly pretty yachts with laminated wooden hulls since 1993, including the largest single-masted wooden yacht built in the UK since the 1930s, the jaw-dropping new Spirit 111. But last year the Ipswich-based yard also launched the Spirit 44e, Avvento, a smaller sister to its 47 and 55 Cruising Range yachts.

The owner is Vincent Argiro, a retired tech entrepreneur who lives and sails in British Columbia. Explaining his motivation, he said: “My first sailboat was also the first of its kind to be built all-electric. I have never owned anything else, nor will I. To me, it is a terrible corruption of the beauty and simplicity of sailing to add internal-combustion propulsion to it.” 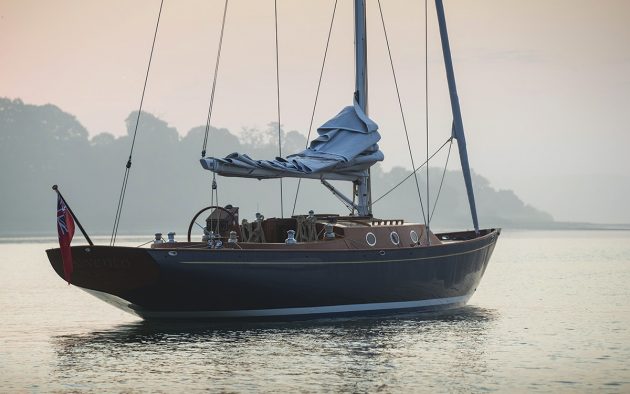 Avvento is built, Spirit claims, to last 100 years and to be largely recyclable when the time does come. In the meantime, she will burn no hydrocarbons whatsoever, with not even a backup generator or wind turbine installed.

The river Orwell in Suffolk was flat calm for our test sail. No more than zephyrs ruffled the water’s surface, barely disturbing the mirror-reflection on the Spirit 44e’s brightwork of varnished sico mahogany and polished stainless steel.

The 44e’s sharp bow sweeps back into a modest sheerline, and the sleek coachroof rises out of a pale yellow Lignia wood deck. Abaft the oval cockpit is a decadently long counter stern and raked transom beneath the sweeping quarter deck.

The design brief for the 44e began as a short-handed racing yacht that was also suitable for coastal cruising. Now the boat is built, Argiro explains: “I definitely expect to do long passages, including offshore races – genuine adventures.

“I also expect to live aboard for many months. British Columbia sailing is year-round for the rugged among us, so she will see lots of use in all seasons.”

The 44e has more beam and higher topsides than Spirit’s thoroughbred Classic range, but by modern standards still has modest beam and a fine stern – sacrificing a full 4m (13ft 4in) to her overhangs.

Slipping the lines you notice the lack of diesels rumbling into life. Flick out the throttle on the binnacle, nudge it ahead, and the Oceanvolt 15kW (20hp) saildrive motor delivers power smoothly from standstill. 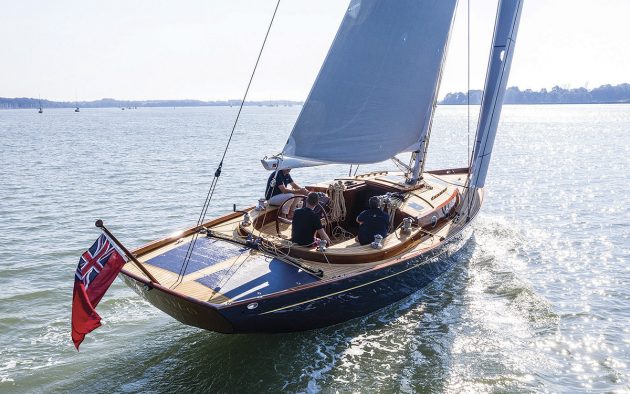 Once the breeze had increased to 5-6 knots we began tacking downriver, against the breeze and the last of the flood, making 4-5 knots and around 50-55º to the true wind direction over the ground – an impressive feat against the tide.

In the narrow channel we found its short waterline means the Spirit 44e spins on a sixpence. This responsiveness makes the boat feel like a big dinghy; a gentle nudge of the wheel will have her sailing to every lift and header, and with a displacement of just 6.5 tonnes, you can feel the acceleration with each little puff.

This is a boat that rewards concentration, but is well enough balanced that you can lock the wheel and leave the helm while you winch in a headsail or trim the main, and it hold her course perfectly.

The Spirit 44e’s slender lines aft mean that when she heels, she does so along the centreline. The helming experience is noticeably different, as you are not perched high up on the aft quarter where the motion is greatest, or forced to a limited view on the leeward side. Positioned well forward and midships, you have a good all round view and a feeling of connection to the water.

Built for the often light winds of British Columbia in Canada, Avvento’s rig is higher than standard, creating space for a larger, powerful 54.4m2 fully-battened, slab-reefed mainsail. The 105% jib (32.8m2) is set on an electric furler below deck.

Both sails help deliver the Spirit 44e’s sustainability targets: whereas most laminate sails are made of a mixture of fibres, films and glues meaning they can only be disposed of in landfill, One Sails’ 4T Forte sails are made from different forms of a single substance – high modulus polyethylene.

Moulded as a single piece, these sails are claimed to be stronger and promise more longevity than other laminates and, critically, at the end of their lives, the hardware can be removed and the sails completely recycled. 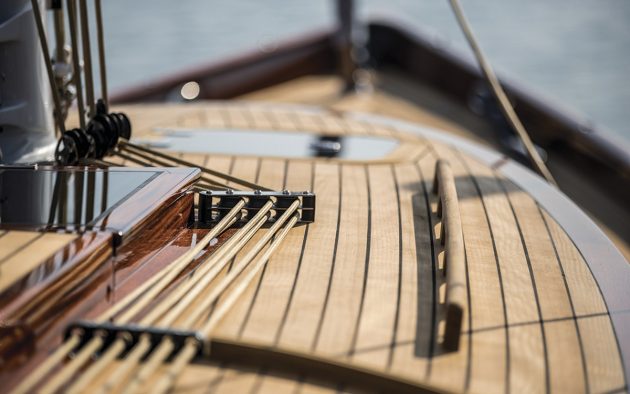 Halyards are all led aft to a bank of clutches on the coachroof. Photo: Richard Langdon / Ocean Images

Halyards are led aft to a bank of clutches on the coachroof, and getting to the halyards is the only reason a single-handed skipper would need to leave the helm, for which the B&G autopilot can lend a hand. Cleverly, the lead angles for the jib sheets work to either of two 48ST winches on each side so the headsail can be trimmed from the helm when single-handed, or from further forward with crew, leaving the aft winches free for spinnaker sheets.

As the wind died on our sail back in, we left the main up and engaged the motor again. Handling was good at lower speeds, though slightly twitchy above 6.5 knots thanks to her short waterline, but with electric propulsion you would naturally back off – energy consumption increases exponentially with speed.

Motoring at 7 knots with no sails up, the Spirit 44e range was little more than a couple of hours or 14 miles. Motor at 5 knots and this increases to around 5 hours/25 miles, while at 3 knots with no sails up, your range is a sedate 200 miles while you use a mere 1.3kW. Add in up to 625W from the colour matched Solbian solar panels mounted flush in the quarter deck and the Solar Cloth System panels on the mainsail, and you extend this by another 50%.

If you can sail for some of that distance, with the 48V Oceanvolt motor and ServoProp controllable pitch propeller set to ‘regenerate’ you’ll be putting 500W into the 30.4kW battery bank at 6 knots, and a whopping 1.5kW at 8.5 knots. Unlimited motoring range is not that far out of reach (there is also a shore charger). 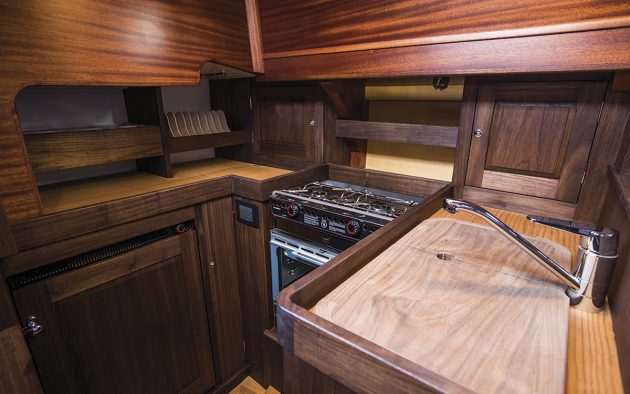 Argiro acknowledges that range is still an issue, but says: “The pros are so numerous; never smelling diesel fumes (especially when seasick); the quiet; the silence during manoeuvring; the instant torque; the lack of maintenance; the very high reliability. There is only one con and that is range. And there is a simple remedy to that – patience.”

The technology is developing quickly, says Argiro. “Within five years, I believe that the enormous advances that Tesla is making in reducing the cost and increasing the energy density of batteries will bring range and cost parity with internal combustion engines to electric yachting.”

The boat is constructed using Spirit’s tried and tested three layers of epoxy strip planking over laminated ringframes, creating a strong and lightweight shell. This is all done using certified sustainable timber, and Spirit is looking into using bio resins to replace the current petrochemical based ones. 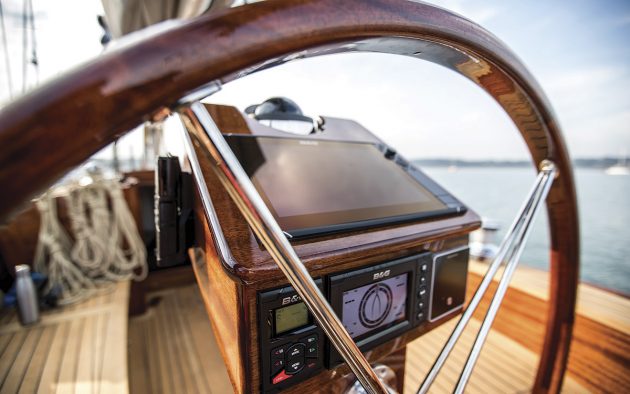 The boat is decked with Lignia wood (treated softwood to make it as durable as hardwood) and not teak, because: “It is impossible to guarantee that teak from Myanmar is sustainable, so we have decided not to use it and Lignia is, if anything, better than what it replaces,” explained Spirit’s managing director Nigel Stuart.

Down below the structure of the boat, coupled with Spirit’s flawless craftsmanship, creates a stunning interior with a cosy feel. Avvento is finished with sole boards in pale yellow Lignia, with joinery in oiled walnut (even the dye in the oil is plant rather than oil based), and the Douglas fir strip planking of the hull visible behind the upholstered settees.

Unsurprisingly, there is much less volume in the accommodation than most modern 44-footers, but Spirit has found clever solutions to squeeze in C-shaped seating for six to port around a fold-out table, and a straight settee to starboard, at 190cm both long enough to serve as sea berths. In the C-shaped galley, the owner opted for a fossil-fuel free alcohol stove, but Spirit now often fits electric induction cookers.

The forward cabin is largely taken up by a vee-berth with locker space to starboard and stowage beneath the bunk. In a boat fitted with a diesel engine, there would be space for just one quarter berth, but with the space saved with the electric motor, the 44e squeezes in an additional berth behind the companionway, above the motor. 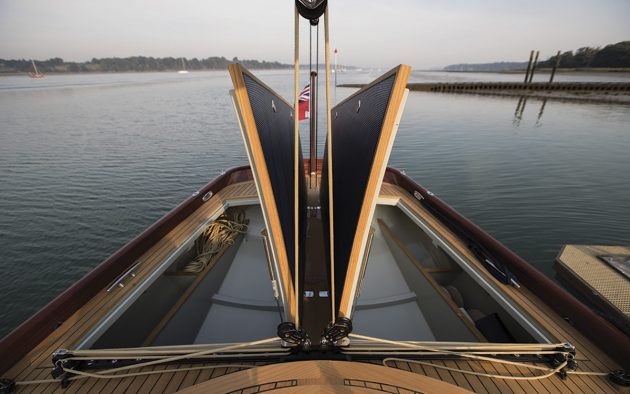 Stowage is reasonable but not extensive – there are good lockers throughout, while stowage under berths is limited due to the water tanks and batteries. But this is compensated for by vast stowage on deck with the counter stern providing cavernous lazarette lockers which will easily swallow an inflatable dinghy, fenders, sails, folding bikes and the usual cruising clobber.

The 44e is drop dead gorgeous. From her sleek lines to her dovetail joints, there is no part of the boat that is not a pleasure to look at. She is also utterly engaging to sail, being light, powerful and responsive. And above all, she is light years ahead of most production yachts in terms of environmental impact, leading the way that others need to follow.

Another Defunct British Automaker Is Back In Business

How to troubleshoot your four-stroke outboard engine