Slingsby’s Australia SailGP team take their fifth event win in a row at SailGP Chicago, while Canada deliver a surprise

‘A box office show’ is how Ben Ainslie described the US SailGP venue at Navy Pier Chicago, this weekend. It’s hard to imagine a better venue for Larry Ellison and Russell Coutts’ ambitious series, which aims to take the ‘stadium sailing’ concept to the next level.

A spectacular city skyline, the bustling Navy Pier spectator area and a crowd of die-hard sports fans (it seems every other person in Chicago is wearing their favourite team’s shirt). Add in glorious sunshine and Lake Michigan could hardly have delivered more.

The only thing the so-called ‘Windy City’ was missing was wind – at least on the final day. While Saturday delivered moderate but fully foiling conditions within the confines of the Navy Pier breakwater, for today’s final races the race organisers had to move the whole show further offshore. 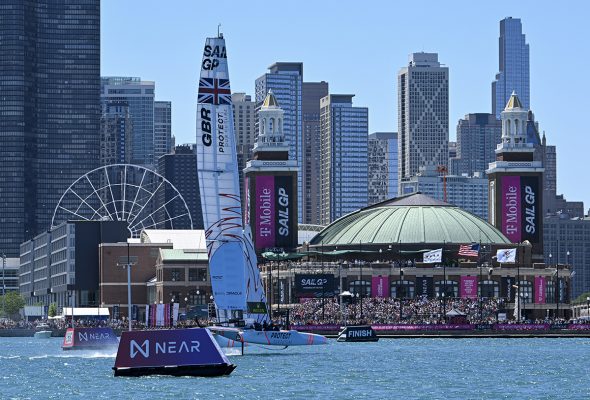 That’s not a decision to be taken lightly – the crowds packed on the bleachers had paid $185.00 per head for the privilege of a unique spectator experience based on the promise of so-close-you-can-touch it sailing action. But despite the decision to sail with a light winds set up for the one-design fleet – which includes light airs foils, rudders, and a whopping 29m high light airs wingsail – for raceable conditions the whole course was moved outside the breakwater.

The decision proved to be a smart one and, despite a few touch downs during the first race of today, the three-boat grand final delivered a full foiling show.

Reigning champion Tom Slingsby had made hard work of getting to the final with his Australian team picking up an uncharacteristic 10th in the first race of the day and only overtaking New Zealand in the series points at the penultimate race.

“We came dead last in the first race and I thought our chance of making the final had gone and our winning streak had come to an end,” Slingsby admitted after racing. 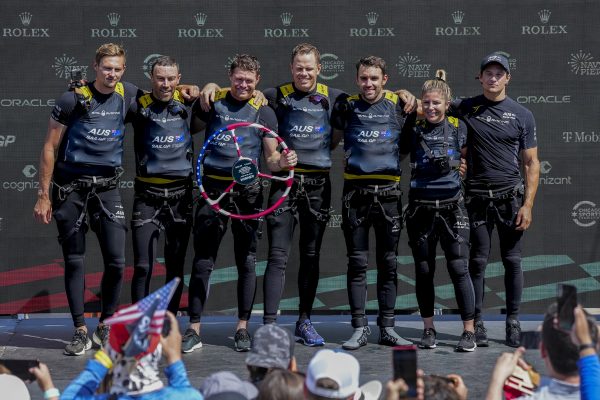 “But a lot of people don’t know that four of the six people in this team were part of the greatest sporting comeback in history, when Oracle Team USA came back from 8-1 down in the America’s Cup to win 9-8, so I’ve always known how good they were under pressure and it’s nice to see that recognised. I know when we have a high pressure situation we’re going to perform.

Perhaps the surprise stars of the show in Chicago were Team Canada, skippered by gun-for-hire Phil Roberston.

Roberston is highly experienced in the F50, having previously driven for the Chinese and Spanish teams, but the impact his new Canadian team have had on the leaderboard has surpassed many – including Robertson.

Having made an impressive debut in Bermuda to finish 3rd overall, the Canadians picked up two race wins in Chicago and finished the final in 2nd. Has Robertson – who described himself as a ‘bit of a scrapper’ in the pre-event press conference – rattled some of the more long-standing teams?

“I don’t know if we’re rattling anyone,” he told us, “I just think it goes to show if you put a good team on the boats you can do really well in this series. We’ve got momentum on our side, which helps, and I can assure you our training time here was not very pleasant – it was very average but we pulled it together.

“I must say I’m a little bit surprised. I expected us to be competitive, but not competitive against Australia and Great Britain and to be matching them for speed and in manoeuvres around the track is pretty cool. It’s a good place to be but I know different conditions could really trip us up, so we’ve got a lot to learn.”

Slingsby, however, confirmed that the Canadians have made an impact. “They are proper contenders,” he said.

“Here it was tough – it was shifty and patchy, and they’re good, they’re really good. I think more respect has to go to Chris Draper, he was unbelievable with Team Japan and now he’s switched over to the Canadians and got them to the top of the fleet. With two podium places in a row, they’re true contenders.” 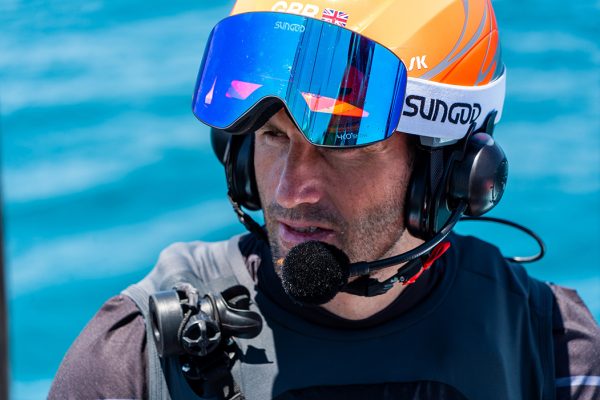 Third overall was Ben Ainslie’s Great Britain team, who delivered a very consistent series to secure a place in the final race.

“Are we happy? Yes and no – happy to get into the final race and felt like we were quite consistent across the weekend. That was a goal across the season, because last year we had some issues and were very up and down, but we need to start nailing that final race and being a bit better than are,” said Ainslie.

The next event in the SailGP calendar is in Plymouth, from July 30-31. Find out how to buy tickets, including bring-your-own-boat access, at sailgp.com