This is the latest installment of Rolling Stone‘s Music in Crisis series, which looks at how people all across the music industry are coping with the coronavirus pandemic.

When Alex Rangel headed into work on March 12th, 2020 as the lead audio engineer at Denver’s Ball Arena, his professional life as he knew it was coming to end. That period was, he says, “possibly the most intense and frightening 30 hours of my career.”

Lead audio engineers typically hold full-time, salaried position at many of the country’s leading arenas, but not in Denver. Rangel and several colleagues in similar positions are employed as hourly contract workers; Rangel makes $22/hr. Unlike many peers who might have received some unemployment benefits or reduced pay throughout 2020, Rangel has been entirely dependent on finding more work in order to make ends meet.

“When I went to school for this, it was supposed to be the career that would never get hurt,” says Rangel. “We thought, ‘[the world of] rock & roll, and events, were foolproof. If people are broke or sad, they’re still going to go.’ But you can’t fucking go when there’s a pandemic. We learned that the hard way.”

Rangel knows he’s been luckier than most: He picked up scattered freelance work throughout the summer of 2020, and by last fall he was back to work in the Ball Arena booth mixing audio for crowd-less NBA and NHL games for the hometown Nuggets and Avalanche.

The past twelve months have been the most creatively and technically challenging year of Rangel’s career. He’s learned how to make audio sound tolerable in an empty arena, how to find the perfect levels for fake crowd noise, and, perhaps most difficult of all, how to mix sound for a singer wearing a mix.

Rangel is grateful for the learning experience. “It’s made me know my worth and me real optimistic for the future,” he says. “Just to know that when things come back to normal, I’m going to be in a good place.”

Rangel spoke to Rolling Stone about his tumultuous past year.

Things have changed quite a bit in the last few months. We, as in the concert industry, were thinking maybe we’d be at full capacity by Labor Day weekend, if the vaccine went well. Now it’s looking maybe more like mid-summer. There’s been more work [in the Denver area] and things look a little bit more hopeful.

I’ve been working at small local venues, and it’s funny to see how fast the rust builds up. With mixing sound in an empty sports arena, there are some challenges. When there are a lot of people in the crowd, you can really push the system and it really soaks up a lot of the unwanted frequencies with all these big water stacks in the crowd, basically. Without as many people, it’s harsher, so you can’t push it as loud. If you push it, you have to really carve up your EQs and it starts to sound funny. You have to find that sweet spot: how bright is too bright?

Some venues in Denver, we’re at 25–person capacity. One of the venues I work at in Colorado Springs, they’re now in the blue zone, so 25% capacity, which for them is 250 people, so that felt good. But the last few weeks in Denver have been 150 people max, and a couple smaller venues, I think the highest they got was 40 people in attendance, and that included anyone the band brought, like a photographer.

It used to be [in Denver] that the stage had to be 25 feet from the closest table, but you didn’t have to wear a mask on-stage if you were a singer. Now, the stage can be within 12 feet of people, but you have to wear a mask [on-stage] no matter what. Mixing a singer with a mask presents a whole different challenge. I’ve mixed people with masks before–when I was working last summer, everyone had to wear masks at the time–but it doesn’t make it any easier.

The challenge is two-fold: If you have something over your mouth, you lose a lot of that crispness, that high-end, a lot of that definition that separates the voice from the rest of the mix. We call it “presence” in the audio industry. You can boost the EQ but that might create a feedback loop. You don’t want that to happen. So that’s the challenge: What can you do to make [a singer] still sound intelligible without having feedback. There’s a muffle that comes into play; it’s just a pain in the ass to sing with a piece of fabric in your mouth. One thing I’ve encouraged singers to do is get these plastic devices that go inside your mask that keeps the mask away from your lips. It’s really like I’m earning the “engineer” part of my title job engineer.

At the arena, my [employment situation] is a little weird. When it comes to the major positions, it’s 99% in-house employees. But my position is contract, which everywhere else in the country is considered in-house. It’s by far my most involved gig and it’s close to my lowest-paying. I’m not saying I’m worth gold, but I went to school and put in the time, and there are things I’ve learned. I’m worth a couple bucks. But I know I don’t make nothing: $22 is a lot to someone who’s used to making $10 or $12/hr. 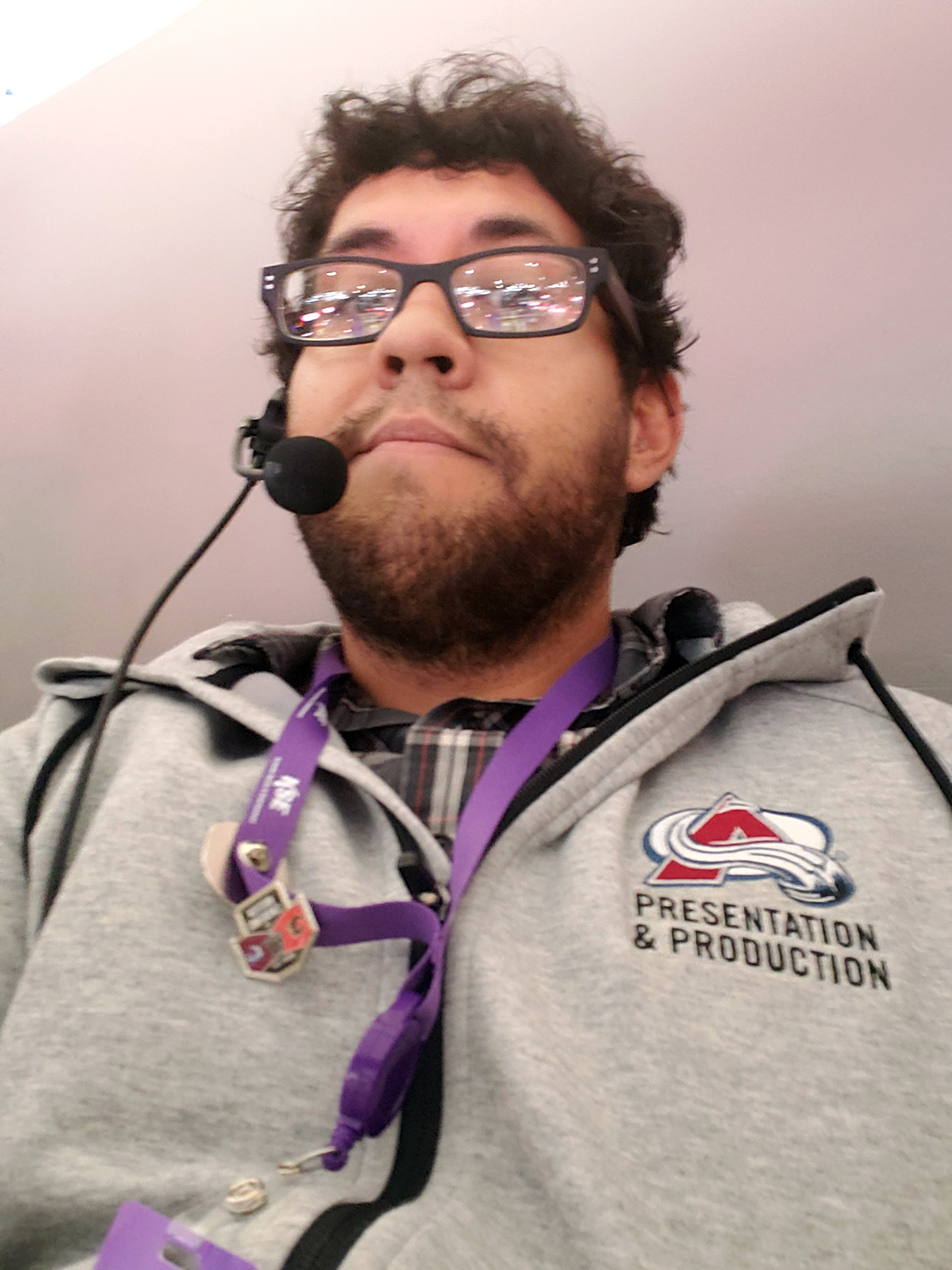 If a game starts at seven, most everyone gets there at noon to set everything up. Whereas the [contract workers] like myself, we come in two hours before gametime. Everyone who works for the arena is like, “What the hell. Is this comfortable for you?” It’s like, fuck no it’s not. There are a couple bugs in the [arena’s sound] system, but all I can really do is report them. I would like to dig in and fix them, but I just don’t have the time to do it. It puts us in a weird position.

When you mix sound in an arena, you take the crowd for granted. If it’s empty, you have the high frequencies that are really punishing to the ear, so you have to tame those. But you also have the low frequencies; normally they hit people and you feel the chest pump and they die down, but in an empty arena they just sit there and reverberate and make the room real muddy. I call it, “thick,” almost like you can lean on the air because there’s so much gross bass. It’s challenging.

Then there’s the fake fan noise. It’s more mixing than I would’ve thought. We call it fader riding: with the [fake crowd noise], we ride the fader up and down all game. The Nuggets head coach recently told us to pull the fader down real slowly during free throws, because they shout plays to each other then, so we cheat a bit and have a bit of crowd noise so no one can hear them shouting plays.

But no matter what comes of whatever job I have, this past year has been such an eye opening experience. If you thought you were an engineer with chops before all this, try it now. When it’s a big crowd, you can almost bury an error. When it’s a wide open empty place with 30 or 40 or even 250 people, instead of 1,000, you have to be so tight. I just have to make sure it’s good now because if I can make it sound good now with 25% crowd, it’s only going to be a few short months before we’re back to 100%.

I’m not thankful for the pandemic, but I’m thankful for the ways it’s opened my eyes to be able to not take for granted what I’d done before. There were times when I didn’t know if I would come back to this industry, or thought I had to take another job at a grocery store or become an accountant or something actually sustainable. That being said, I’m one of the few engineers in Colorado and maybe even in the country that still has work. It’s not impossible: you have to do it safely and really grind, but it’s made me super thankful.