In a series that began much closer than many expected, – when the rumours of a much faster boat developed by Emirates Team New Zealand did not fully come to fruition – the New Zealanders really stretched away in the later part of the regatta, winning the last four races in a row and winning the event by 7 races to 3. 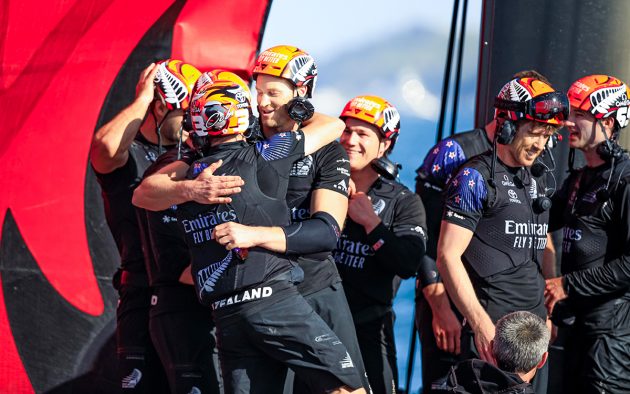 Luna Rossa Prada Pirelli put up an impressive fight early on in the event and had clearly developed a slick package that was able to match the New Zealand boat in some conditions. But in the end the Kiwis did have a slight speed advantage across the range of conditions. And as the event unfolded this slight advantage looked increasingly too much for the Italian team.

It has been an incredibly interesting contest in this 36th America’s Cup, with the first generation of the new AC75s delivering some interesting racing. The Cup match itself has seen two boats developed independently that behave in different ways.

The Italians’ boat could clearly point higher than the Kiwis and early in the regatta they could tack faster too, but this tacking advantage became less pronounced as the event continued and the Kiwis developed their tacking ability.

Though their boat was not able to point as high, Emirates Team New Zealand always had a faster boat downwind and, given space to sail low and fast, were a click quicker upwind too.

Today (Wednesday 17th March) saw a small delay before the breeze properly came in and blew at around 10-12 knots.

Sure enough, Luna Rossa got a strong start slightly ahead and tight to leeward of New Zealand. But in a clearly pre-planned move, the Kiwis tacked away immediately and by the first cross they were clear ahead.

“We have been learning all week and there have been a lot of even starts,” explained New Zealand helm, Peter Burling. “On that start we wanted the right and we were willing to give up a bit to get there.

“I think we have a strong package and when we are able to stretch our legs we can really show what it can do.” 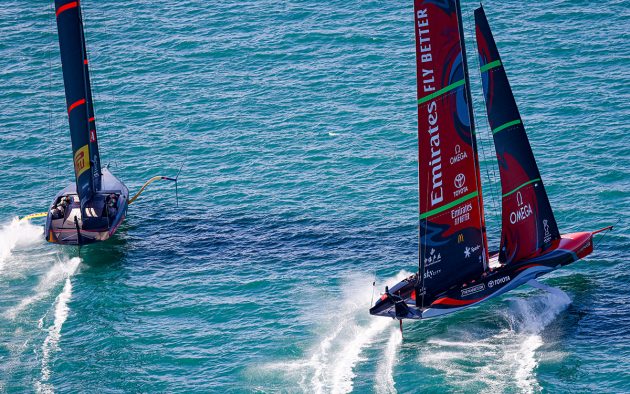 New Zealand tack away to the favoured right of the course immediately after the start. Photo: ACE / Studio Borlenghi

Luna Rossa put up a strong fight, and they did find some gains out to the left, making the next cross closer, but after that it was a case of the Kiwis stretching their legs and extending much of the way around the course. 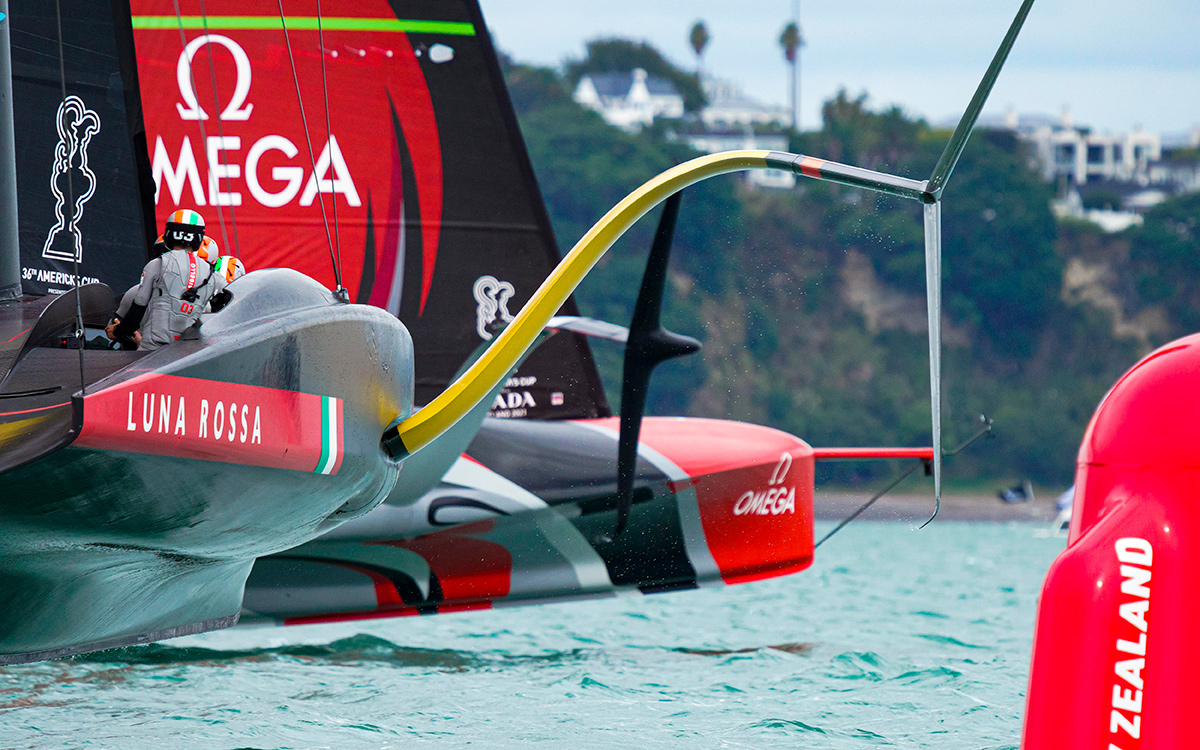 It was a shifty, patchy day out in Auckland for a thrilling Day 6 of America’s Cup racing, which saw… 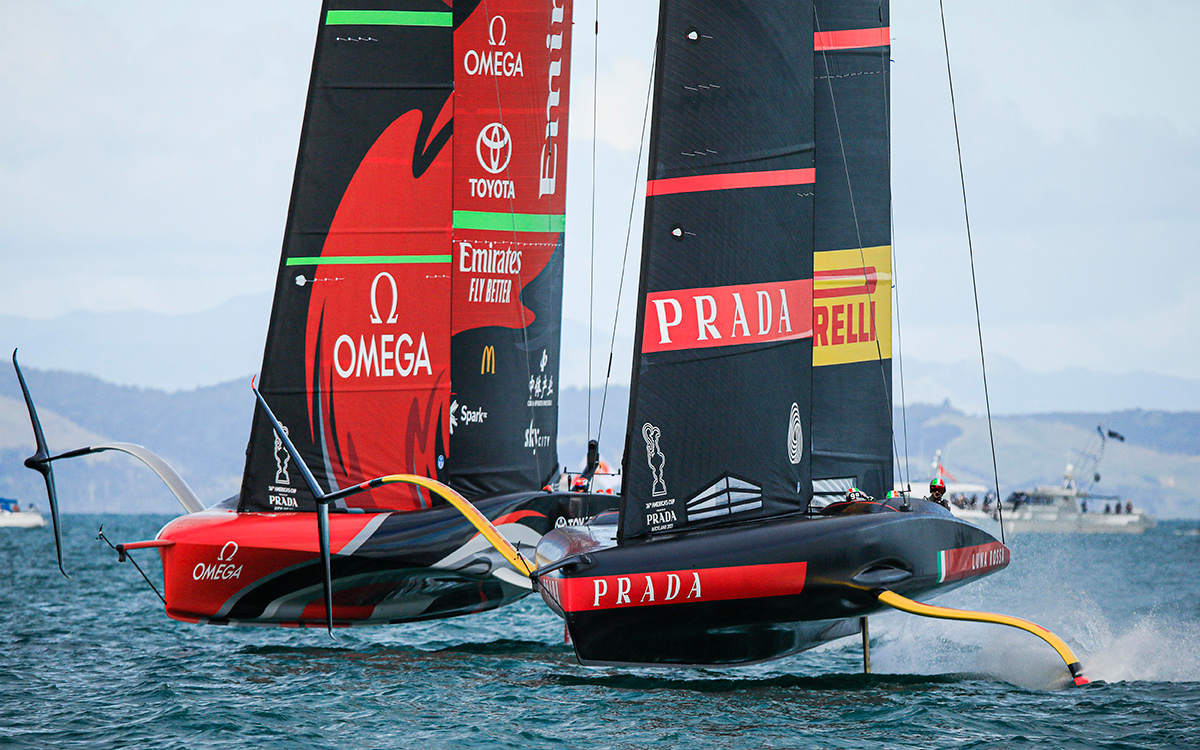 I’m off to buy a gum shield tomorrow. It’s bad enough grinding my teeth at night, but doing it for…

Luna Rossa did not give up and even managed to pick up a few shifts and play the pressure better to close in again on the first downwind. But they simply did not have the pace to get an overtake.

The final lap was essentially a victory lap for Emirates Team New Zealand and they crossed the finish line clear winners.

I would like to congratulate Luna Rossa, we have an amazing team and I think we have shown the world that we can do it. It’s not finished and I am sure Mr [Patrizio] Bertelli [CEO of the Prada Group] and Luna Rossa with try again.” 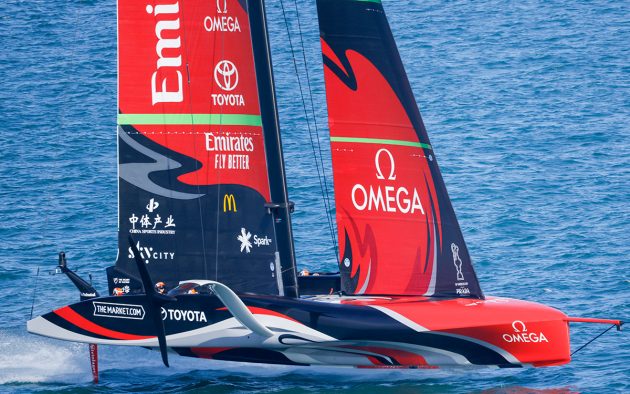 This Cup will be remembered for several reasons, the Kiwi defense one part, the first showing of the AC75 (which look likely to return for the next event), and crucially for the impressive event run by New Zealand in the midst of a global pandemic.

It’s been hugely impressive for the country to put on such a smooth event under the circumstances. Now we wait to find out who will be the challenger of record for the 37th America’s Cup, what the boats will be, where the event will be held and, eventually, whether anyone can take the Cup away from a New Zealand team who are starting to look dominant in the oldest trophy in sport.

Top Ways to Keep Yourself Hydrated in Style

4 Things To Do If You Are An Injury Victim

What To Look For When Buying Luxury Houses

A Guide To Playing World of Warcraft As A Beginner Player

The best canvas cleaners to get your sprayhood clean