A makeshift memorial in Injustice Square Park in downtown Louisville for Breonna Taylor in Sept. 2020 in Louisville, KY. Taylor was killed a year ago during in her home during a botched narcotics raid carried out by Louisville police. 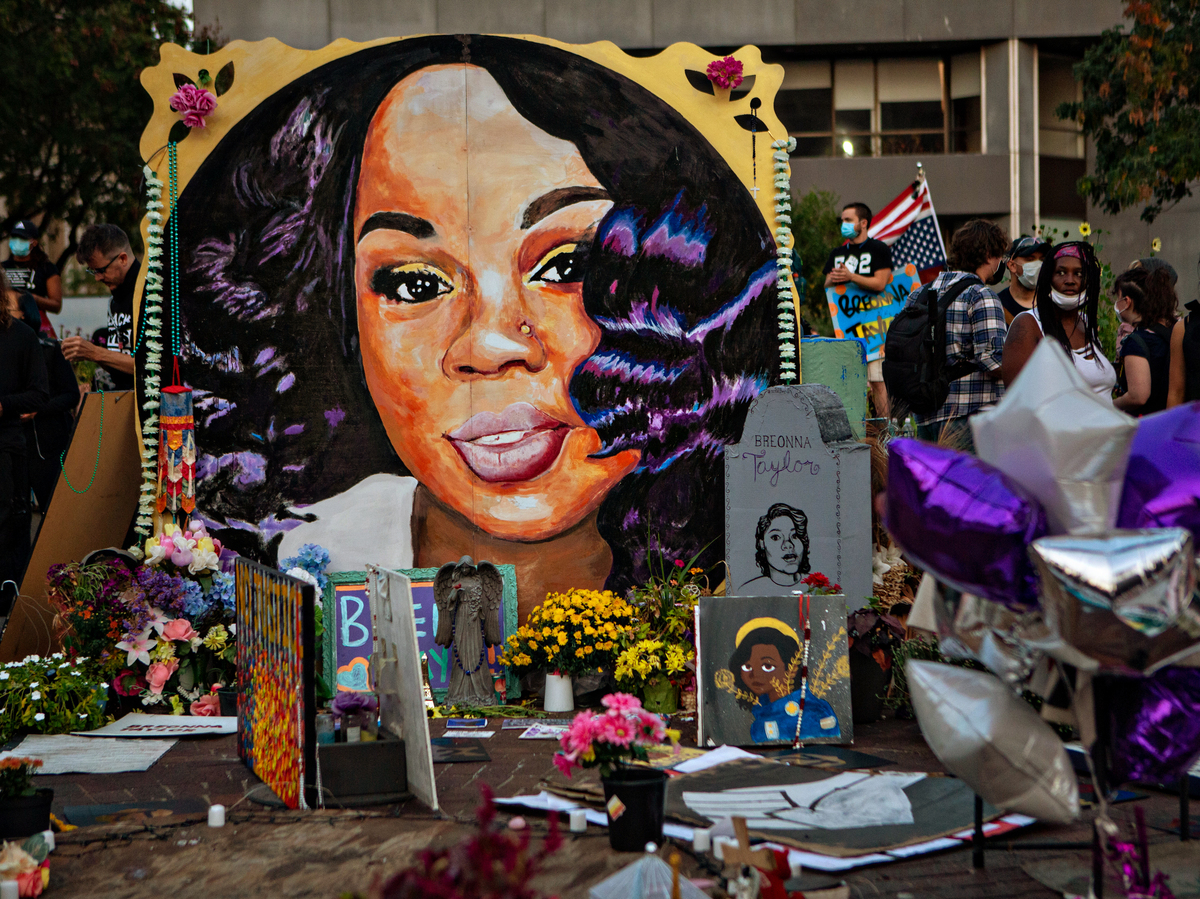 A makeshift memorial in Injustice Square Park in downtown Louisville for Breonna Taylor in Sept. 2020 in Louisville, KY. Taylor was killed a year ago during in her home during a botched narcotics raid carried out by Louisville police.

Before Breonna Taylor’s name became synonymous with police violence against Black Americans, she was an emergency medical technician in Louisville, Ky.

The 26-year-old Black woman’s friends and family say she was beloved, and relished the opportunity to brighten someone else’s day.

Exactly one year ago, Louisville police gunned her down in her home. Now, her name is a ubiquitous rallying cry at protests calling for police reforms, and her supporters point to her story as an example of how difficult it can be to hold police accountable for violent acts.

The Louisville incident unfolded during a botched narcotics raid, when officers forced their way into her apartment in the early morning hours of March 13, 2020. Taylor was not the target of the raid and the suspect police were searching for was not at Taylor’s home.

A year after Taylor’s death, none of the officers who fired their service weapons — a total of 32 rounds — face criminal charges directly over Taylor’s killing. At least three officers with connections to the raid have been terminated from the force.

In September, the city of Louisville announced a $12 million settlement in the wrongful death lawsuit filed by Taylor’s family, which also included several police reforms.

“Her death has ignited a movement in Louisville and the nation for racial justice, sending thousands into our streets and cities all across the country and the world all crying out for justice for Breonna,” Louisville Mayor Greg Fischer said at a press briefing announcing the settlement.

The push for justice continues

But many advocates believe justice has not been done, citing the lack of criminal charges and saying they want to see broader criminal justice reform.

Demonstrators plan to gather in downtown Louisville on Saturday to mark the anniversary of Taylor’s death, member station WFPL reported. Activists say they hope to keep her memory alive and renew calls for justice, after the winter dampened on-the-ground protests.

Some advocates are calling for Kentucky’s Republican-controlled legislature to pass “Breonna’s Law,” which would ban no-knock warrants statewide.

The Kentucky Senate passed a bill late last month restricting such warrants in certain situations, which many activists and Democratic lawmakers say does not go far enough. They had introduced a similar bill in the House in August, called “Breonna’s Law,” but the House Judiciary Committee voted on Wednesday to move forward with the Republican-sponsored proposal, according to WFPL.

Louisville Democratic Rep. Attica Scott, the primary sponsor of Breonna’s Law, told NPR’s All Things Considered on Friday that committee officials have said they will consider proposed amendments that would bring the two bills further into alignment.

She also said she had written a letter to newly-confirmed Attorney General Merrick Garland this week, asking him to fully investigate Taylor’s killing.

“Justice has not been served,” Scott said. “Folks on the front line have been very clear that they’re continuing to call for all of the officers involved in Breonna Taylor’s murder to be fired, arrested and charged for her murder. They have not wavered from those demands.”

She said she will be attending the gathering on Saturday, describing it as one of “love, community and solidarity.” Local activists have characterized it similarly.

“To the LMPD and the mayor and everyone involved, we’re still going to keep applying pressure,” protest leader Rosie Henderson told WFPL. “But as a whole in the movement, we want to unify. That’s a day that we’re going to come together and unify as one.”

A year later, the pain is still fresh for Taylor’s loved ones.

Ju’Niyah Palmer, Taylor’s sister, wrote on Instagram earlier this year that her heart was “heavy because we are only 2 months away from me not hearing, seeing or cuddling you for a whole year.”

Her mother, Tamika Palmer, recently filed complaints with the police department’s professional standards unit against six officers for their role in the investigation that included the raid. In an Thursday interview with a Louisville CBS affiliate, Palmer expressed her frustration with the lack of accountability in the case and called on the community to continue demanding justice.

“I can’t believe it’s a year later and we’re still just asking people to do the right thing,” she said. “Not to say all officers are bad, but there’s no accountability.”

No criminal charges in Taylor’s Death

Last September, after months of protests in and around Louisville, the city was braced to hear whether a grand jury would hand down criminal indictments for LMPD officers Brett Hankison, Jonathan Mattingly and Myles Cosgrove.

At a press briefing Sept. 23, Kentucky Attorney General Daniel Cameron announced no charges directly tied to Taylor’s death. The grand jury handed down three criminal counts of wanton endangerment to Hankison, over shooting through Taylor’s apartment into a neighboring residence.

The grand jury did not charge Mattingly, who shot six times, and Cosgrove, who fired a total of 16 rounds, including what federal investigators determined to be the round that ultimately killed Taylor.

Cameron, whose office took over as special prosecutor in the case in May, said at the press conference that both Mattingly and Cosgrove “were justified in their use of force.”

After the two officers forced their way into Taylor’s apartment, her boyfriend Kenneth Walker fired on them. Walker, a licensed gun owner, has maintained that he did not hear the officers announce themselves before entering and mistook them for intruders. He fired a shot, which hit Mattingly in the leg.

After Mattingly was struck, officers returned fire, according to officials. 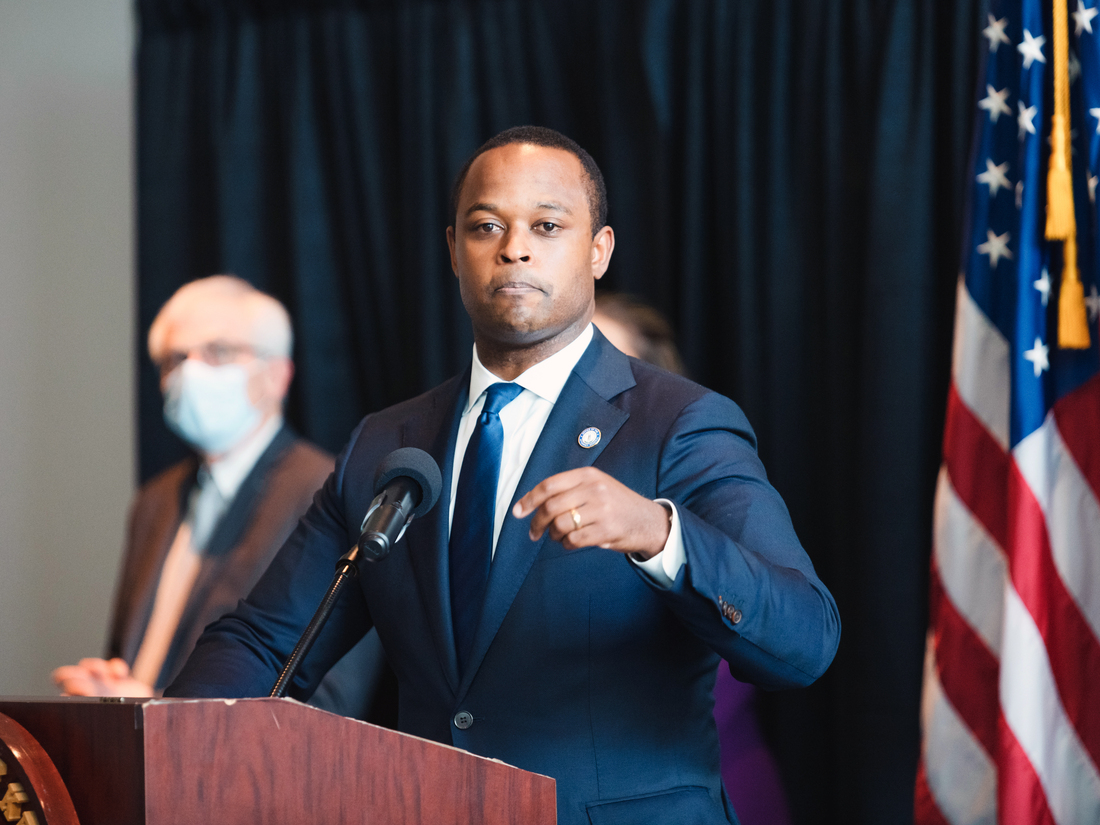 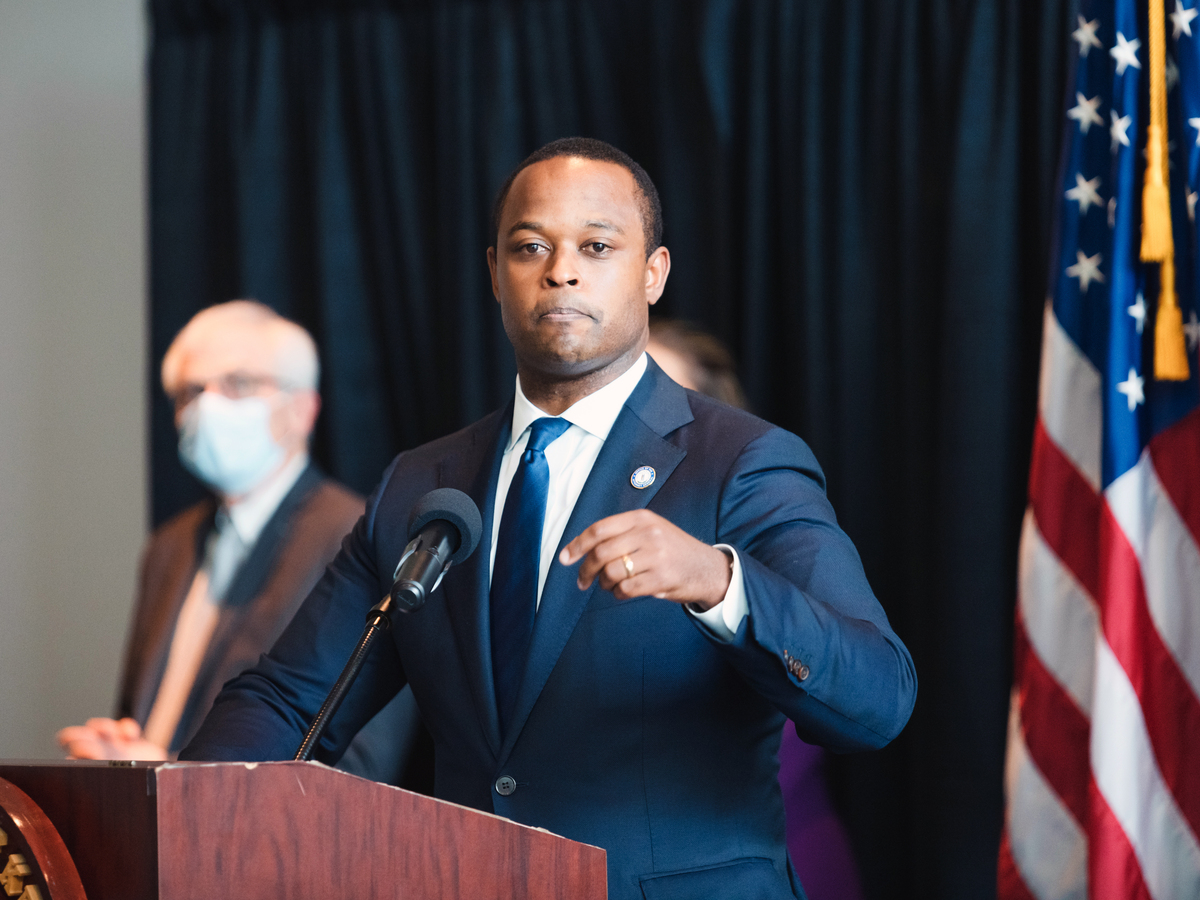 Complicating matters is the absence of video evidence in the case.

Cameron, Kentucky’s first Black attorney general, told reporters that “evidence shows that officers both knocked and announced their presence at the apartment.”

He cited the officers’ statements and one additional witness as evidence, but also acknowledged there is no video or body camera footage of the officers executing the search warrant.

Cameron’s announcement sparked fresh outrage and demonstrations in Louisville, Atlanta, Denver, and Portland, among other cities.

Days after Cameron’s press conference, Taylor’s mother, Palmer, said she was “reassured … of why I have no faith in the legal system, in the police, in the law. …They are not made to protect us Black and brown people.”

“It’s kind of ironic when you think about the message that is being sent from this grand jury ruling,” Taylor family attorney Benjamin Crump said in September.

In that same press conference, Crump raised questions about what evidence Cameron presented on behalf of Taylor to the grand jury.

He also publicly called for the release of the transcripts of the proceedings, something that is extremely rare in grand jury cases. The court did so several weeks later, after some jurors took issue with Cameron’s explanation for why no officer was directly charged in Taylor’s death.

Officer says Taylor shooting was “not a race thing”

In October, Mattingly characterized the Taylor incident as tragic, but said it was different from other recent killings of Black Americans.

“It’s not a race thing like people try to make it to be,” Mattingly said in an interview with the ABC News and Louisville’s Courier Journal. “This is not relatable to George Floyd, this is nothing like it. It’s not Ahmaud Arbery. It’s nothing like it.”

“These are two totally different type incidences. This is not us going, hunting somebody down, this is not kneeling on a neck. This is nothing like that,” he said.

Mattingly also vehemently denied that he is racist.

Hankison was terminated from LMPD in June, after the department found he fired “wantonly and blindly” into Taylor’s apartment.

In January, some nine months after Taylor’s killing, the department formally terminated Cosgrove and another officer connected to the incident.

Both Cosgrove and Detective Joshua Jaynes, who secured the warrant for the raid on Taylor’s home, were found to have violated department protocols, according to the termination letters made public on Jan. 6.

LMPD officials said that for Jaynes, “the evidence in this case revealed a sustained untruthfulness violation based on information included in an affidavit completed by you and submitted to a judge.”

LMPD said Cosgrove violated the department’s protocols on use of deadly force and failed to activate his officer-worn body camera.

“The shots you fired went in three different directions, indicating you did not verify a threat or have target acquisition,” the letter to Cosgrove stated. “In other words, the evidence shows that you fired wildly at unidentified subjects or targets located within the apartment.”

In that same batch of documents, LMPD also said that Mattingly, who was shot during the raid, was exonerated on both counts of violating department procedures on use of deadly force and de-escalation. It added, “no disciplinary action taken and the complaint will be dismissed.”

The disciplinary documents were released the same day Fischer, the Louisville mayor, formally announced that Erika Shields would be the city’s next permanent police chief.

Shields resigned her post as Atlanta’s police chief in the immediate aftermath of the killing of Rayshard Brooks, a Black man who was shot in the back during an encounter with white officers in a Wendy’s parking lot in June.

In Jackson, Mississippi, some residents have been without water going on two weeks

R. Kelly Is Convicted On All Counts After Decades of Accusations of Abuse