Have you heard the phrase ‘through hell or high water’? I’ve been through both, simultaneously when crossing the Bay of Biscay in winter and with only modest sailing experience.

In January 2020, after the year-long restoration of our 1970 S&S Swan Elixir, my friends Max, Harry and I set off on the first stage of our circumnavigation. We undertook a few trial sails, but never in foul weather, and I had less than 30 hours’ sailing under my belt.

The Biscay crossing started out as almost plain sailing, watches and the lack of sleep were a new routine to adapt to, but an accepted part of the process. We ate, napped and passed each other like Elixir passed the ships through the night. Slowly we became used to the rigmarole of undressing and redressing into our endless layers at the end and beginning of each watch.

Growing swell for our Biscay crossing

By the third or fourth day – time quickly lost meaning – we were celebrating our achievement, we had nearly made a Biscay crossing in January! How easy was that?

How presumptuous were we, was the real question. 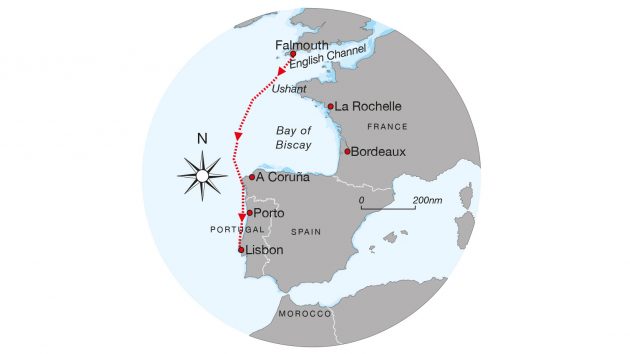 As the day progressed the swell grew but we made light of the waves sloshing over the deck. Then darkness came and everything was less exciting. Sails were furled and reefed, until only the smallest triangle of foresail was powering us.

Despite this we still stormed along at 7-8 knots, surfing down the following waves. Watches were reduced to two hours to limit our exposure to the frigid elements. My morale-boosting playlist was quickly silenced, as the battery charge required for the speakers was no longer boosted by the solar panels, so it was just me and the sound of the ocean. 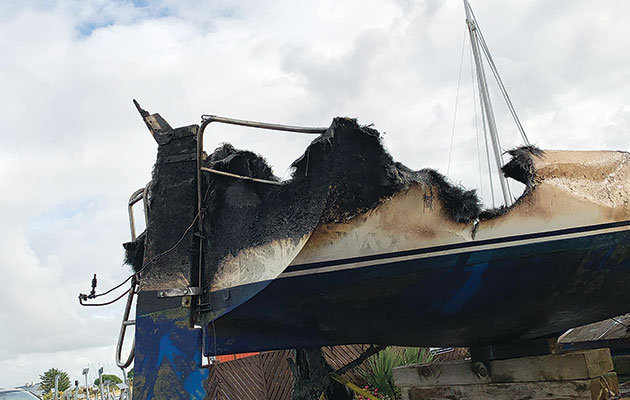 First thing on Wednesday morning, my phone started to ring. Given the timing, I didn’t think the marina calling would… 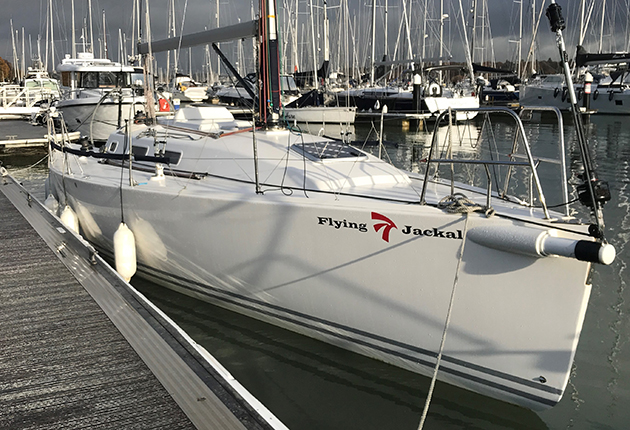 From car-crash viewings to wasted journeys of hundreds of miles, Wayne Palmer shares the steep learning curve of buying his…

As if showing off, a wave cascaded over the port quarter, and filled the cockpit up to my ankles. I could not have been more satisfied with the money I had spent on my foul-weather gear. All those hours working minimum-wage jobs were worth dry feet in that one moment.

After my watch I slowly shed the onion-layered chrysalis of my wet weather gear. I bedded down to try to exploit the measly four hours I had to sleep. My bed was already leaking at the head; the icy drips were not ideal, but it was made bearable by the fact my short stature allowed me to sleep further down the mattress.

Harry’s bed was leaking in the same manner, and there is nothing like miserable solidarity to raise spirits. The boat was rolling and heeling; it was not a comfortable place to sleep, particularly as it was still only my first few days at sea. 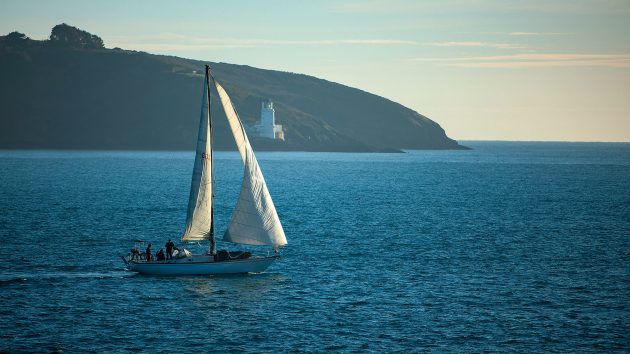 Weather was calm and fair for the first few days of the crossing.

It wasn’t just the movement, but the sound that repeatedly dragged me from slumber. An incredible mix of the water, the waves, the weather and the rigging. It was difficult to distinguish what exactly evoked the greatest fear.

I was just about taking it in my stride until I heard a great crash into the cockpit, and shortly afterwards, felt water against my feet. I turned on my light to see that now the foot-end of my berth had also been soaked. I curled in a foetal position in my sleeping bag, precious warmth now limited to the middle section of my bed.

My safe place had been compromised.

On the previous night when I had been scared, I pulled over my covers and held my hot water bottle tight. I panicked and questioned my motives, my aptitude, Max’s decisions about our safety and it all led to the overwhelming feeling that I had to be anywhere but that boat. However, I had nowhere to escape to.

With every sound of the waves fear welled inside me as I waited for the next influx of water. It came, now through the window – tightly closed but with an ancient gasket – as unbeknownst to me the cockpit had now ﬁlled to fully submerge my window.

My selfish, adrenaline-saturated mind gave no thought to poor Max outside in the fury. I had to get off that boat, I could never go through it again. I made frantic arrangements in my head – could I take a bus from Galicia to the Basque Country where I have family? Would my friend with a van take payment to collect me and my belongings? Was it too much for a flight? And how would I deal with returning to Cornwall empty-handed of the experience I’d been boasting of for more than a year? 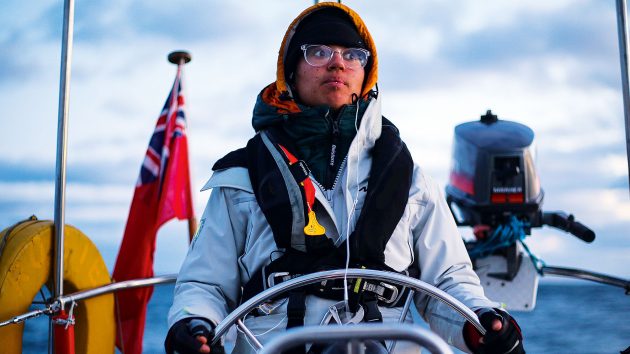 Chloe at the wheel of Elixir in a calmer moment

I’d fallen at the first hurdle. Perhaps I could flee, to Ghana or India, a far-flung exile to these countries of which I’d dreamt. I cursed Max again. Why had it been left to me, a novice, to ensure my cabin was watertight? The water came in again, now through the throttle mounted on the side of the cockpit – I would never have known to waterproof this! Eventually I moved to Harry’s cabin, a refugee.

The lee cloth had slipped and I had no energy to fix it. I held onto the mattress to stop myself being flung from the bed as Elixir bounded along on a port tack. I was becoming more sleep deprived by the minute and my decision to leave the boat more resolute.

The four hours had passed in a lucid state of wakefulness, and it was now time for my second watch. It was 0400. I pulled on my damp oilskins with heavy limbs in a state of delirium.

I made my way out to the cockpit and made the bare minimum conversation with Harry. ‘Any vessels?’ ‘What’s the heading?’ I tried to joke about my fear. Harry reassured me that conditions were improving, and while I could not believe it myself, it was true that fewer waves were breaking over the cockpit.

I clipped on and set my focus on the compass. Our bearing was 220º and all I had to do was keep the compass marker in line with this for the next two hours. However, just two hours in a hell of high water feels totally and utterly insurmountable.

The strong winds meant our windvane had been rendered useless, and it was down to me. The helming was terrifically physical, and my neck and shoulders were strained against the strength of the weather-helm and all of Elixir’s mass. 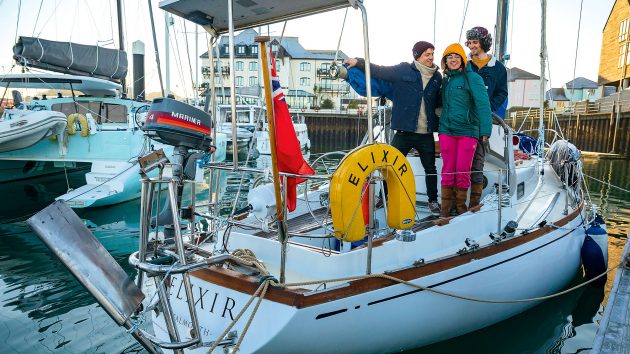 Chloe, Harry, and Max onboard Elixir

The world outside was a different loudness to the world inside, but it meant I was no longer afforded the luxury of passing time with a podcast or playlist. I had to keep my spiralling mind occupied, so I took to counting – a metric measure of the passing time.

Two hours and thousands of numbers counted came close to an end, and I desperately looked out for the sign that I had completed my sentence. My anxiety was eased as I saw a flood of light through the portholes, but time spent attending to business inside meant my responsibility was extended.

My heavy eyes swung between awake and asleep, losing sight of the red glow of the compass light. My grip grew looser as my hands faltered at the end
of limbs tight and aching after battle. Eventually the hatch slid open, and unable to maintain any façade of ‘okay’, I retired to Max’s bed. 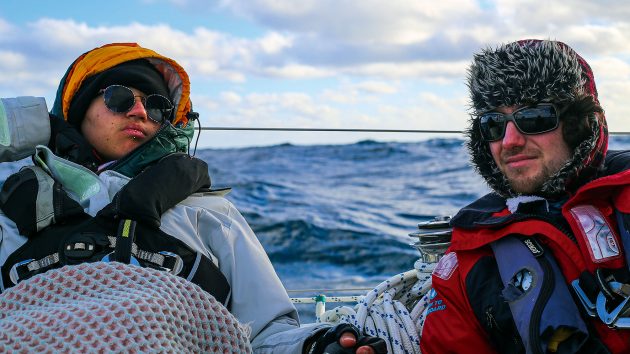 Enjoying a winter sun. This could have been a good time to catch up on sleep

Thick, safe, sleep came and I woke to a new day, calmer seas and a calmer mind. I spent the day resting and reflecting on the vast journey upon which the mind can travel over the expanse of 12 hours of darkness.

I marvelled at my new- found resilience, and felt an even stronger love for my friends who had kept me safe. Elixir held fast, and we steered for Spain.

Meet the man who drives every new Bugatti

Shakedown skills & drills for the start of the season