The third-generation Range Rover Sport is currently available to order and is due to start deliveries as a 2023 model. It’s priced from $84,350, including destination, and brings with it a new platform, svelte styling, and available hybrid and V-8 powertrains.

The Range Rover Sport is the second model from Land Rover based on the MLA (Modular Longitudinal Architecture) platform that debuted in the 2022 Range Rover. The platform features 81% aluminum in its construction, and its torsional rigidity has seen a 50% improvement over the platform it replaced.

The platform also supports a wide variety of powertrains, including an electric setup. Land Rover plans to have six electric models in its lineup by as early as 2026, starting with electric versions of the Range Rover and Range Rover Sport in 2024.

Don’t be surprised if the electric model is the most powerful in the Range Rover Sport lineup. However, before it arrives the title will go to a Range Rover Sport SVR packing a V-8. While that model is still out testing, buyers looking for maximum power in the 2023 Range Rover Sport will have to settle for the P530 First Edition (2023 model year only), which comes equipped with a 4.4-liter twin-turbocharged V-8 good for 523 hp and 553 lb-ft of torque, or enough for 0-60 mph acceleration in 4.3 seconds.

The entry grade is the P360 SE, which comes with a 3.0-liter turbocharged inline-6 and mild-hybrid combination good for 355 hp and 369 lb-ft. Above this is the P400 SE Dynamic with the same powertrain as the P360 SE, but with 395 hp and 406 lb-ft on tap. Completing the range is the P440e Autobiography, which comes powered by a 3.0-liter turbocharged inline-6 and electric motor in plug-in hybrid configuration. This setup is good for a combined 434 hp and 619 lb-ft and an electric range approaching 50 miles thanks to a 31.8-kilowatt-hour battery.

Regardless of the grade, drive goes to all four wheels via an 8-speed automatic and all-wheel-drive system. Air suspension, all-wheel steering, and the latest version of Land Rover’s Terrain Response driver-assist feature for varying surfaces are also included. New on this generation of the Range Rover Sport is adaptive cruise control for off-roading. The driver has four settings to choose from, each of which maintains the suitable speed when off-roading and enables the driver to fully focus on the steering. 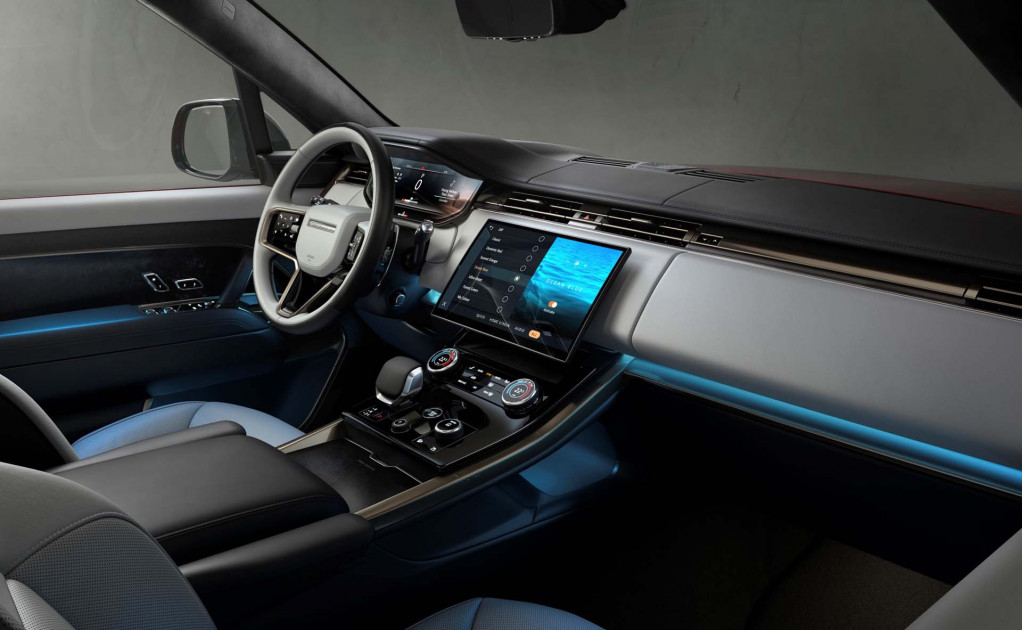 Like the Range Rover, the design of the Range Rover Sport follows a “less is more” philosophy. The exterior looks like it was hewn from a single solid, while the interior continues the clean crisp look we’ve come to expect from Land Rover. A configurable 13.7-inch screen serves as the instrument cluster and is joined by 13.1-inch screen for the infotainment. The infotainment screen is a touchscreen that has multiple menu panels that occupants can move around for ease of use. Wireless Apple CarPlay, Android Auto and charging for mobile devices are all present.

Buyers have multiple audio systems to choose from, all from Meridian. The top of the range is the Meridian Signature Sound System which features 29 speakers, a subwoofer, and up to 1,430 watts of amplifier power. A noise cancellation system is also featured to improve comfort and provide a better sound experience when the audio system is in use.

Full pricing for the 2023 Range Rover Sport is as follows:

All figures include a $1,350 destination charge.

For more on the Land Rover Range Rover Sport, read the in-depth reviews at The Car Connection.

How To Keep Your Body Healthy And Fit