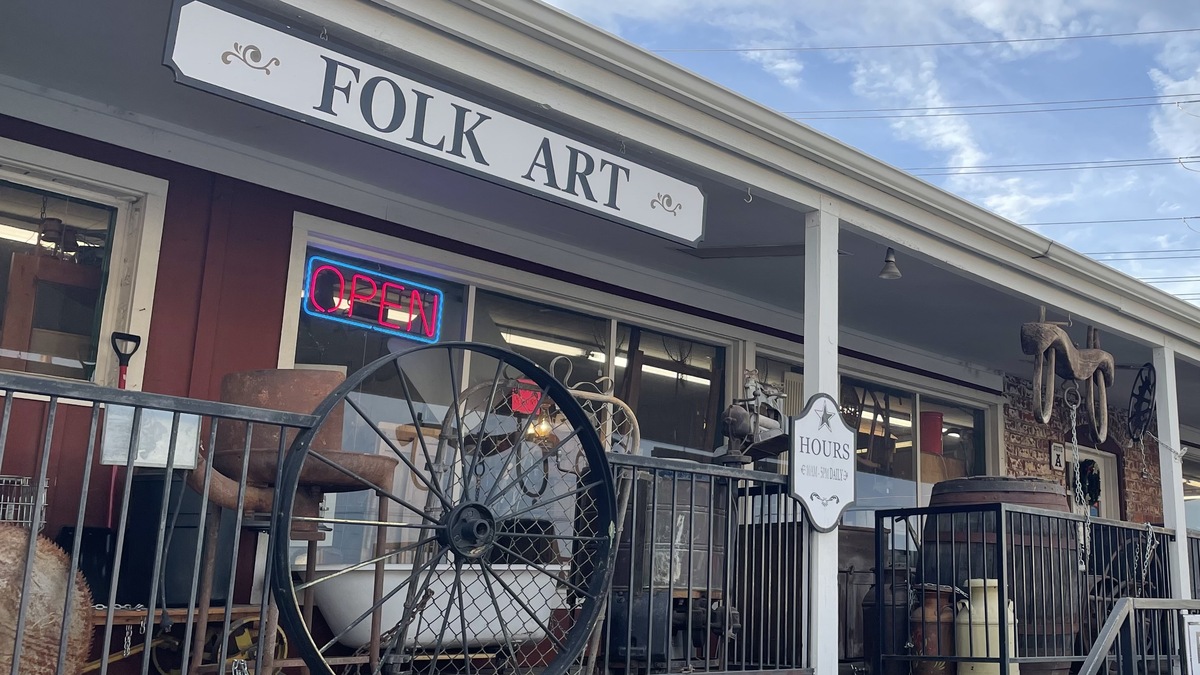 Objects from the past fill every corner of the Farmers Co-op Antique Mall in Central Oregon: decoy ducks nested among the rusty typewriters, musky clothes, and toys made for children who grew old long ago.

The floorboards creak as customers wander this maze of booths. A couple of months ago, one glass display case looked a lot like dozens of others full of knickknacks. But, something inside the well-lit case made 15-year-old Lily Gallentine do a double take.

“Am I seeing that right?” she remembers thinking. Then, she says, her heart began to race.

The Nazi pins were coin-sized and had swastikas on them.

Before that day, the store had been a refuge for the 10th grader from Redmond, Ore.,: “Just to get out. We go to a few antique stores, poke around, and have some fun.” She says she likes to “see the stories behind certain things.”

A week before Christmas, Lily was hunting for toy cars to give to her dad, who collects them. Instead, she found the case of swastikas; their price tags were $36 each. The pins were neatly lined up next to an ashtray with a blackface caricature from the now-defunct Coon Chicken Inn, a restaurant chain until 1957. More of the chain’s racist merchandise was on sale, like a poster marked down to $18.

Mass protests since the spring of 2020 have brought more attention to racism in systems, actions and beliefs. But as Lily discovered, hate can also take the shape of objects. Her mom, Andrea Utz, joined Lily in front of the case that day. Utz says she felt “stunned, then disappointed, and then just like, ‘Ugh, here we go, again.’ “

Again because last summer at least one person targeted the family with a racist action at their own home.

“We put up a Black Lives Matter sign in our yard, and a day or two later it was stolen. It was gone,” Lily says. The family responded by planting a new sign, this one a little closer to the house. “And a day later, we were just sitting at the dinner table, and the doorbell rang.”

Utz got up and answered. But, no one was there. On the porch, someone had left a watermelon — the letters B-L-M carved into it with a permanent marker. In a photograph Utz took, the rind looked chiseled because the letters had been rewritten so many times, and with such force. The newly placed yard sign was gone.

Watermelons have long been subverted as symbols of racism against Black Americans. The Deschutes County District Attorney’s Office assigned an investigator to look into the incident as a possible hate crime. But neither prosecutors, nor Redmond police turned up any leads, according to Deschutes District Attorney John Hummel.

Months later, Utz, who is white, is still shaken: “I’m not going to let my daughter, who is a person of color, walk around alone at night here, even with her friends,” she says.

The population of Redmond is 90% white — a demographic rooted in Oregon’s legacy of systemic racism. The Oregon Constitution originally forbade Black settlers from moving to the state. Other laws prohibited Black people from owning property and making contracts. These exclusion laws were repealed almost a century ago, but more racist language in Oregon’s founding document wasn’t removed by voters until 2002.

At the Farmer’s Co-op Antique Mall in Redmond, the symbols of white supremacy seemed to blend in with all the other merchandise.

“Well, yeah. That’s memorabilia that people buy,” store owner Ike Abbas says when first reached about the display. “I’ve been doing it for 37 years, and people enjoy it. Blacks even buy it. We got one gal in there that is Black and she sells a lot of stuff.”

When pressed about the juxtaposition of swastikas with Black Americana and racist caricatures, he defends the vendor’s option to sell whatever they want in a space rented from Abbas for $55 per month.

Vendors can sell what they please, the antiques dealer says, as long as it’s legal, “and we don’t sell guns just because people break in to get guns.”

But after reporting from Oregon Public Broadcasting, the store faced a public backlash. The anti-Semitic objects and some of the other racist items were removed.

Selling Nazi and racist memorabilia isn’t against the law in the U.S., but with national conversations about the country’s racist history ongoing, the purpose of such sales is in question — particularly when the items are jumbled together with no historical context.

“The only audience that is going to be into racist, Black Americana, as well as Nazi memorabilia, would presumably be a racist audience,” says historian Mark Pitcavage, who monitors extremism for the Anti-Defamation League. The non-profit’s mission is to expose anti-Semitism and other forms of bigotry.

Pitcavage says there are nuances to why people collect some offensive items: context is key — such as whether an object is in a museum or for sale. The motivations of the collector are important to consider.

“You have to treat these items very carefully,” Pitcavage says.

One person who’s spent a career learning to be careful with racist artifacts is sociologist David Pilgrim. He remembers being about 12 when he got his first example at a flea market. He thinks it was a “mammy” salt shaker, which he bought and destroyed in front of the vendor, “as an act of defiance.”

“Growing up a multi-racial, Black identified kid in the Deep South in the last days of Jim Crow, I thought about race a lot,” Pilgrim says.

Over the decades, he kept collecting racist objects — accumulating thousands of everyday items “that you would find in someone’s home, in their kitchen, in their restroom, in their living room.”

Pilgrim eventually became a teacher, and started using his collection as an educational tool. He says he would often start with a simple question.

“When you look at this, what is it you see?” he asks. “And it will always amaze me how people reared in the same way, often the same hometowns, will have such divergence in the way they look at an object, especially one dealing with race.”

Pilgrim’s collection would become the basis for the Jim Crow Museum of Racist Memorabilia at Ferris State University in Michigan. He refers to the museum’s holdings as propaganda: “Because when we show these racist depictions in cookie jars, in toys, in games, in everyday objects, it’s a very sneaky way to spread those ideas.”

The ideas stereotype Black people as subservient, foolish, evil or less than human. And these ideas are still trafficked in the form of memorabilia.

For instance, among the newer items in the museum, former President Barack Obama is portrayed as a monkey, a cannibal and a sexual predator.

For Oregon teen Lily Gallentine, it’s a sign of progress that one of the local antique stores removed racist and anti-Semitic items.

“I just try to remember like, ‘Hey, this is the reason why I’m going to protests and I’m educating myself, and educating others, and raising my voice,’ ” Lily says.

Her family has put a new Black Lives Matter sign in their front yard, a visible marker that they haven’t been forced into silence. But her courage comes at a cost, too. In addition to the sign, the family installed a security camera.

Premarket stocks: Vaccines and stimulus are a powerful cocktail for the US recovery

It’s the US’ deadliest avalanche season in years. Experts say Covid is partially to blame

What Song Meant The Most To Your Loved One Lost To COVID-19? : NPR

Data shows one-third of Americans could have COVID-19 immunity